With the development of computed tomography (CT) and its widespread use for diagnosis, the number of small lesions discovered in the peripheral lung field has increased in recent years (1). It is considered that tissue diagnosis of a peripheral pulmonary lesion (PPL) be conducted before the start of treatment. Diagnostic sampling of a PPL includes transbronchial biopsy (TBB) under X-ray fluoroscopy and percutaneous transthoracic needle aspiration (TTNA). It was reported in the guidelines of the American College of Chest Physician (ACCP) that the diagnostic yield of TBB was 63% for lesions ≥20 mm (n=984), and 34% for lesions <20 mm (n=383) (2). On the other hand, the diagnostic yield of TTNA for a PPL was ≥90%, making it the preferred method for pre-operative diagnosis (2). However, TTNA has been reported to cause complications such as pneumothorax, air embolism, and tumor seeding (3,4). Therefore, it is prudent to search for a more safe diagnostic method.

According to a recent meta-analysis, the diagnostic yield of guided bronchoscopy using new techniques such as virtual bronchoscopic navigation, endobronchial ultrasonography with a guide sheath (EBUS-GS), and ultrathin fiber was ≥70%. The most common complication was pneumothorax but even so, the rate of it occurring was low at 1.5%, indicating that TBB is a safe diagnostic method (5). However, these reports were based on data involving solid nodules. Recently, with the widespread use of CT, interest on ground glass opacity pulmonary lesions (GGO) has been increasing (1). GGO comes in two kinds: pure GGO and mixed GGO, the former has no solid component while the latter has a solid component inside. The frequency of discovering GGO has been increasing and the diagnostic method has posed a clinical problem in recent years (6,7).

Chest tomosynthesis (the SONIALVISON safire radiography/fluoroscopy system, Shimadzu, Japan) is a term coined from “tomography” and “synthesis”. It is a device that permits reconstruction of several slices of the thorax in the coronal plane at a desired depth in a single session of photography. Currently, it is used mainly in the field of orthopedics but there has been a recent report that it is excellent in visualizing chest nodules (8). Likewise, Terzi et al. reported in the SOS study that chest tomosynthesis was very useful to detect early lung cancer (9). In addition, it was recently found to be valuable for identifying the site of a GGO when performing EBUS-GS (10).

To our knowledge, there have been some reports on surgery or TTNA for the diagnosis of GGO, but none on TBB (11,12). Thus, the purpose of this study was to evaluate the diagnostic yield of EBUS-GS and the utility of tomosynthesis for PPLs with GGO.

We retrospectively reviewed the medical and imaging records of all patients who underwent guided bronchoscopy for PPLs at our institution between July 1, 2012, and October 31, 2012. All diagnostic procedures were performed upon the request of pulmonary physicians or surgeons. The diagnostic method (i.e., TBB, CT-guided TTNA, or surgical biopsy) was determined on an individual basis depending on the radiologic and clinical features and the views of the patient. All patients had 5 mm-slice chest CT scan done within four weeks of the procedure and additional 1-mm thin section chest CT scan using an 80-detector CT (Aquillion PRIME, TOSHIBA, Tokyo, Japan). Images were displayed with a lung window setting (center, –600 H; width, 1,500 H).

There was a total of 364 patients in the study period, but only those who had chest CT scan findings of GGO, defined as an area of increased attenuation without obscuring the underlying vessels and bronchi (13) were included. Data collected were diameter of the lesion (<20 vs. ≥20 mm) and percentage of the GGO component (<50%, ≥50%, pure GGO). A pure GGO was defined as a lesion with no solid part while a GGO-dominant lesion was defined as a lesion with a GGO ratio of more than 50%.

This study was approved by the National Cancer Center Institutional Review Board (No. 2012-199).

Procedure of EBUS-GS for GGO

The location of the bronchi leading to the lesion was planned by reviewing chest HRCT images prior to bronchoscopy. In addition, we prepared coronal plane tomosynthesis images before the start of every bronchoscopy procedure and took note of the location of the lesion in relation to the other structures of the thorax. This tomosynthesis image was placed side by side with the fluoroscopy screen to serve as a guide during the EBUS-GS procedure.

For all patients, flexible bronchoscopy was done using a fiberoptic bronchoscope (BF-1T260 or BF-P260F, Olympus, Japan) in combination with a radial ultrasound probe (UM-S20-20R or UM-S20-17S, Olympus, Japan) and a guide sheath kit (K-201 or K-203, Olympus, Japan). The procedure was done under local anesthesia with conscious sedation and the scope was inserted through the oral route, in the same way as the usual bronchoscopy.

Upon reaching the target bronchus, the guide sheath together with an ultrasound probe was inserted through the working-channel of the scope and advanced, under fluoroscopy guidance (VersiFlex VISTA, Hitachi, Japan), towards the area indicated by the previously prepared tomosynthesis image.

If the target location was not detected by EBUS, the EBUS probe was manipulated under fluoroscopy guidance until an acoustic signal was generated. While doing so, we made sure to stay in the lung segment corresponding to the previously mapped tomosynthesis image.

After confirming the location of the guide sheath by EBUS, repeated diagnostic sampling was done by TBB, bronchial brushing, and flushing of the guide sheath with 2 mL of saline (EBUS-GS-guided sampling). Fluid samples were sent for cytology and TBB samples were sent for histopathologic examination. For the EBUS-GS-guided samples that were diagnosed as inflammatory change on pathological examination, follow-up CT imaging was done after three months; those lesions that resolved were designated as benign. If a definitive diagnosis was not established, the patient underwent surgical biopsy to confirm the diagnosis of the GGO lesion.

The study population included 40 patients (19 men, 21 women; age 66.9±8.7 years, mean ± SD) who had peripheral pulmonary lesions with GGO; 35 were detected during lung cancer screening and five patients were detected during studies for clinical reasons. The mean lesion diameter was 22±10 mm (mean ± SD) (Table 1). There were 24 lesions characterized as either type IIa (n=23) or type IIIa (n=1) (14). Sixteen cases did not fit the characteristics described by Kurimoto’s classification. 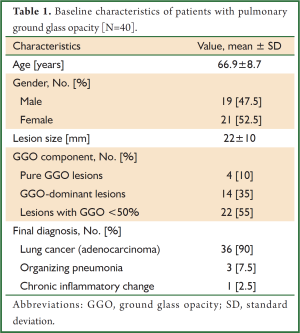 Final diagnosis in the majority of cases was adenocarcinoma; a few cases were organizing pneumonia and chronic inflammatory change (Table 1). EBUS-GS-guided TBB was diagnostic in 26 cases (65.0%), the results of which were as follows: primary lung cancer/adenocarcinoma (n=25), and chronic inflammatory change (n=1). The cytological specimen from EBUS-GS-guided bronchial brushing and flushing of the guide sheath was diagnostic in only 14 cases (35.0%). Lesions that were diagnosable by cytology were also diagnosable by TBB. Mean number of specimens obtained using EBUS-GS-guided TBB was 6.1±2.2 (mean ± SD). Average duration of procedure was 26.3±7.3 minutes (mean ± SD). EBUS-GS-guided TBB was non-diagnostic in 14 cases; these were subsequently diagnosed as primary lung adenocarcinoma (n=11) and organizing pneumonia (n=3) by surgical resection.

The overall diagnostic yield of EBUS-GS-guided TBB was 65.0% (26 of 40 lesions). By univariate analysis (Table 2), diagnostic yield did not vary significantly with size of the lesion (P=0.75), percentage of the GGO component (P=0.47), detectability on fluoroscopy (P=0.18), and location of the EBUS probe in relation to the lesion (P=1.0), but was significantly higher when the target lesion was detectable by tomosynthesis (P=0.01), and when an EBUS image was generated during scanning of the target site (P=0.04). 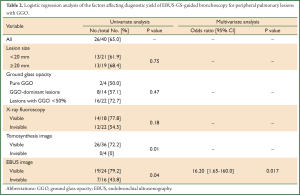 For all 40 patients, EBUS-GS-guided TBB had only one complication: pneumothorax that did not require chest tube draining. Major bleeding, pneumonia, or air embolism was not detected.

A representative case is shown in Figure 1. A 59-year-old man with a chest CT showing a mixed GGO measuring 24 mm in the major axis in the right S1a was admitted to our hospital. Note that the GGO was not seen on plain radiography (Figure 1A). Prior to bronchoscopy, tomosynthesis images were prepared to map the location of the target site in the coronal plane (Figure 1B). The endobronchial route was planned by reviewing HRCT images (Figure 1C). The EBUS probe was advanced into the B1ai bronchus and manipulated under fluoroscopy guidance (Figure 1D) towards the area indicated by the previously prepared tomosynthesis image. EBUS scanning demonstrated a pattern of low-echoic lesion with hyperechoic dots and linear arcs without vessels (Figure 1E). Histopathological specimen from the TBB showed cuboidal tumor cells lining the entrapped alveolar space. 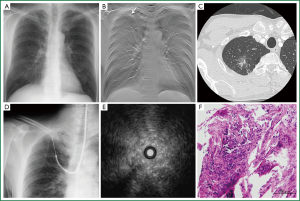 To our knowledge, this is the first report on the diagnostic utility of EBUS-GS and chest tomosynthesis images for GGO, which are now being detected more frequently with the advent of CT screening. Most GGOs are from an inflammatory change but some that turn out to be malignant are usually adenocarcinoma by histology (13). Thus, it is important to distinguish when is a GGO adenocarcinoma or not.

So far, for solid peripheral pulmonary lesions, bronchoscopy or TTNA are the usual procedures for tissue diagnosis but the primary choice is the latter because of a diagnostic accuracy of ≥90% (5). It was reported recently that a similar diagnostic accuracy of TTNA holds true for GGO, regardless of the size, (>20 vs. <20 mm) (13,15). However, TTNA poses a 15-35% risk of pneumothorax and other complications such as, air embolism and tumor seeding (3,4). According to a study on Japanese bronchoscopy, TBB for peripheral lung lesions has a complication rate of only 1.55% (937/60,257 cases). The complications reported were pneumothorax (0.44%) and respiratory failure (0.04%). These suggest that the risks associated with TBB are very low as compared with TTNA (16).

For solid peripheral pulmonary lesions, guided bronchoscopy using EBUS and a guide sheath was developed and consequently improved the diagnostic yield of TBB as compared to traditional TBB under fluoroscopy alone (5). This can be attributed to the capability of this imaging modality to characterize a solid nodule or a consolidation (17-21). By far, there has been no report on the diagnostic yield of TBB for GGO. This is because of the difficulty of confirming the location of a GGO lesion using fluoroscopy alone.

Confirmation of the location of a lesion by TTNA is easy because it involves a more detailed radiologic imaging. However, when using the bronchial access to a peripheral tumor, confirmation of the location of lesion is conventionally by X-ray fluoroscopy. Whether or not a lesion can be visualized on X-ray fluoroscopy was cited to be one of the very important factors that affect diagnosis by TBB (2). But our results suggest otherwise; diagnostic yield of EBUS-GS-guided TBB for GGO lesions was not affected by detectability on fluoroscopy. What is important in the diagnosis of GGO then? Our data showed that accurate confirmation of the location of a lesion by EBUS is of utmost importance for the diagnosis of GGO using EBUS-GS-guided TBB, with a yield of 79.2% compared to a 43.8% diagnostic yield when EBUS image was not detected (P=0.017).

Regarding EBUS, Kurimoto’s classification of solid nodules was reported and is considered useful for detecting a lesion (14). However, there has not been an established classification of EBUS images for GGO. We observed that type IIa in Kurimoto’s classification accounted for 57.5% and type IIIa accounted for 2.5%. Furthermore, there were many cases in which EBUS had much difficulty in visualizing GGO, especially pure GGO and GGO-dominant lesions. The reason for this is that, EBUS generates an acoustic image from the area the probe contacts. Thus, the EBUS image depends on which part of the lesion (solid or GGO) the probe is in. Solid part presents as either type II or type III. Another reason is that the pathologic change of a pure GGO or a GGO-dominant lesion is either too small or is in the beginning stage thus, cannot be perceived by ultrasound. In any case, further study on EBUS images of GGO is required.

In this study there are several limitations. First, it is a retrospective analysis in a single institute and it is not randomized. Second, the bronchoscopy procedures were not performed by the same bronchoscopist. Prospective, randomized trials on TBB for GGO that take into account these confounding variables are needed in the future.