Updated statistics of lung and bronchus cancer in United States (2018)

Lung and bronchus cancer is the leading cause of cancer mortality worldwide, with 1.2 million global deaths a year (1). The disease is not just a threat to human’s health, but also a reflection of socioeconomic disparities, such as sex, race, and geographical area. Therefore, surveillance and estimate of its epidemiological data is crucial for disease control and social development.

According to the CA: A Cancer Journal for Clinicians, the official journal of American Cancer Society, a latest update of cancer statistics in the United States has been released (2). In 2018, a total of 234,030 estimated new lung and bronchus cancer cases will be diagnosed; both the incidence of males (121,680 cases) and females (112,350 cases) are the second highest among all cancer types. However, the trend of incidence in males has continuously declined from 1980s, in females the trend climbed from 1975 to 2005, and slightly decreased after 2005. Different historical patterns of tobacco uptake and cessation account for the different trends between males and females: compared with males, females smoked in later time periods, and at older ages; in addition, females tended to quit smoking more slowly (2-4).

Lung and bronchus cancer continues to be the leading cause among all cancer types in both males (83,550 estimated deaths in 2018) and females (70,500 deaths) for more than 25 years (2). The trend of death rates in males increased by 1990, then continuously decreased 43% until 2014; similarly, the trend in females increased until 2002, and decreased 17% to 2014. Since sufficient evidences have been proved between smoking uptake or cessation, and the incidence and mortality of lung and bronchus cancer (5-9), the efforts on tobacco control and smoking cessation should be continued, to achieve further reduction of the incidence and mortality, especially for women.

Based on the data from 2006 to 2012, the 5-year survival rate is still low: 55% in localized stage (white: 56%; black: 49%), 28% in regional stage (white: 28%; black: 25%), 4% in distant stage (white: 4%; black: 4%), and 18% in all stages (white: 18%; black: 15%). As the techniques of thoracoscopic surgery, and available biomarker-driven drugs like targeted therapies and immunotherapies have been sufficiently developed for different stages of patients in recent years, the survival rate should be expected to improve in future reports. 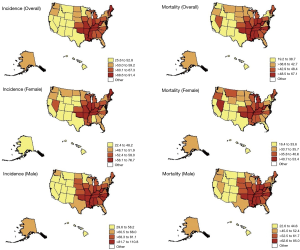 Figure 1 Map of age-adjusted incidence and mortality rates in 2014 according to states. Rates are per 100,000 and age adjusted to the 2000 US standard population. 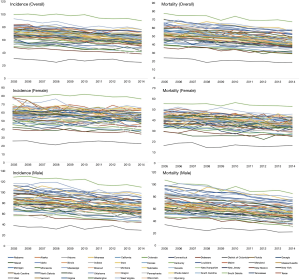 Figure 2 Trend of age-adjusted incidence and mortality rates in a recent decade [2005–2014] according to states. Rates are per 100,000 and age adjusted to the 2000 US standard population. Incident rate of Nevada in 2011 is missing.

In conclusion, the disease burden of lung and bronchus cancer is still large, even though efforts on prevention, diagnosis and treatment have been reflected by a declined trend of the age-adjusted incidence and mortality rates. It is also important to note that, a health disparity remains between socioeconomic factors, including sex, race, and geographical area. A multi-dimensional intervention still need to be utilized through trans-disciplinary efforts at the individual, interpersonal, organizational, communal and public policy levels.