Chronic obstructive pulmonary disease (COPD) is defined as an airflow obstruction with several different but overlapping obstructive syndromes (1). COPD has been thought to be one of major disease prevention goal for public health (2). It was predicted that morbidity of COPD would continue to increase and may be the third leading lethal disease by 2030 (3). The common obstructive syndromes of COPD are chronic bronchitis, emphysema and reversible or irreversible small airways obstruction (4). COPD patients often suffer wheezing, expiratory dyspnea, cough, chest tightness and sputum production (5). Cigarette smoke has been reported as the main cause of COPD, other factors include ambient air pollution, airway hyper-responsiveness and allergy (6,7). Treatment of COPD over the past decades of management includes pharmacological and nonpharmacological interventions with the targets to control symptoms and exacerbations, improve functional performance and quality of life, and decrease risk of hospitalizations, emergency care, and mortality (8,9). However, limitation of clinical practice causes unsatisfactory result as compared with the expectations (10). Qi deficiency and qi-yin deficiency are the most common syndromes, relating to Lung, spleen and kidney (11). And study has shown that the morbidity of lung cancer is implicated in Qi deficiency, which is the internal cause of viscera imbalance (12).

Currently, traditional Chinese medicine (TCM) therapies are widespread in both developing and developed areas (13). Liuweibuqi capsules, a Chinese patent medicine, consist of Radix Ginseng (Renshen), Radix Astragali Mongolici (Huangqi), Alpiniae Oxyphyllae Fructus (Yizhi), Rhizoma Polygonati Odorati (Yuzhu), Cortex Cinnamomi (Rougui), Pericarpium Citri Reticulatae (Chenpi) (14). Renshen is one of the most popular TCM which could inhibit metastasis of melanoma in the lung (15,16). Astragaloside IV is one of the components of Huangqi which has been found a broad application prospects, especially in cardiovascular diseases and cancers (17). Yizhi is in favor of anti-aging activity and an anti-neoplastic medicine (18,19). Yuzhu is regarded as a traditional medicine which has functions of removing dryness, replenishing vital essence, promoting secretion of fluid and quenching thirst, and has been used to treat many diseases, especially tuberculosis (20). Rougui have been documented that it takes part in a variety of biological activities in vitro, one of its function is to induce apoptosis via reactive oxygen species and anti-inflammatory diseases (21). Chenpi has been commonly used as one of the herbal materials to eliminate phlegm and strengthen spleen, which is also an anti-inflammatory medicine (22). However, few studies investigate the relationship among Liuweibuqi capsules, inflammatory cells, cytokines and indicator, immune regulatory cells, and lung function in stable COPD patients with lung Qi deficiency. Therefore, from a microcosmic perspective, we conducted this experiment to investigate their relationship with the perspective to provide a clinical reference in treating COPD patients with lung Qi deficiency.

This study was approved by ethics committee of the First Affiliated Hospital of Anhui Medical University (2012-006). All subjects voluntarily participated in the experiment were fully informed of gains and risks and signed informed consents. This experiment was in accordance with the Nuremberg criteria and the Helsinki declaration.

The forced expiratory volume in one second (FEV1)/forced vital capacity (FVC) (%) and FEV1 (%) of patients before and after treatment and of healthy people during physical examination were detected by pulmonary function test apparatus (AS-507. MINATO, Japan).

All the data were used SPSS 21 statistical software (IBM Corp., Armonk, NY, USA) for processing, measurement data using form of mean standard ± deviation. Comparison between two groups conducted with the t-test, and comparison among groups with single factor variance analysis. Enumeration data is expressed as a percentage or rate, comparison using χ2 test. Analysis of variance (ANOVA) was used to compare multi-group variables with homogeneity test of variance. When the results of ANOVA showed a significant difference, q test were used to compare groups in pairs, and when it showed no significant difference, rank test of non-parametric test were used to compare groups in pairs. Logistic analysis was used to assess the related factors for affecting the efficacy of Liuweibuqi capsules in treating patients with COPD. Text standard was α=0.05, P<0.05 means difference is of statistically significance.

Baseline characteristics of all enrolled subjects were collected when they were admitted in the First Affiliated Hospital of Anhui Medical University (Table 1). 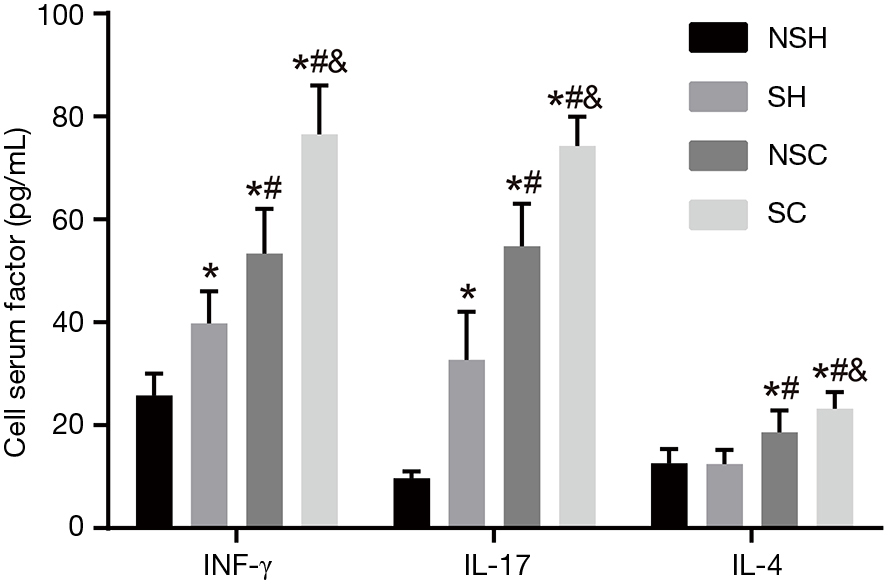 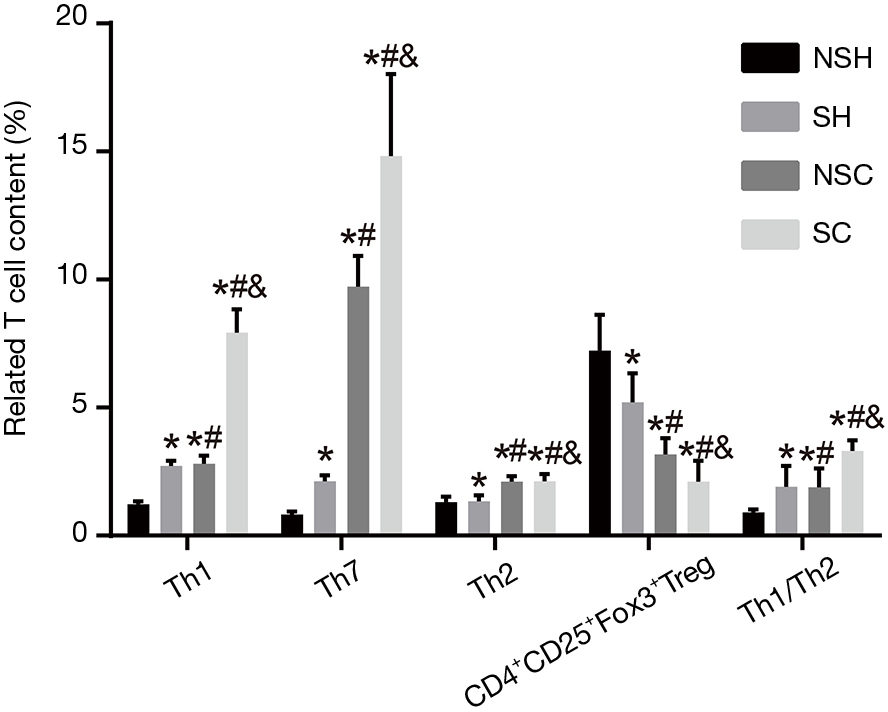 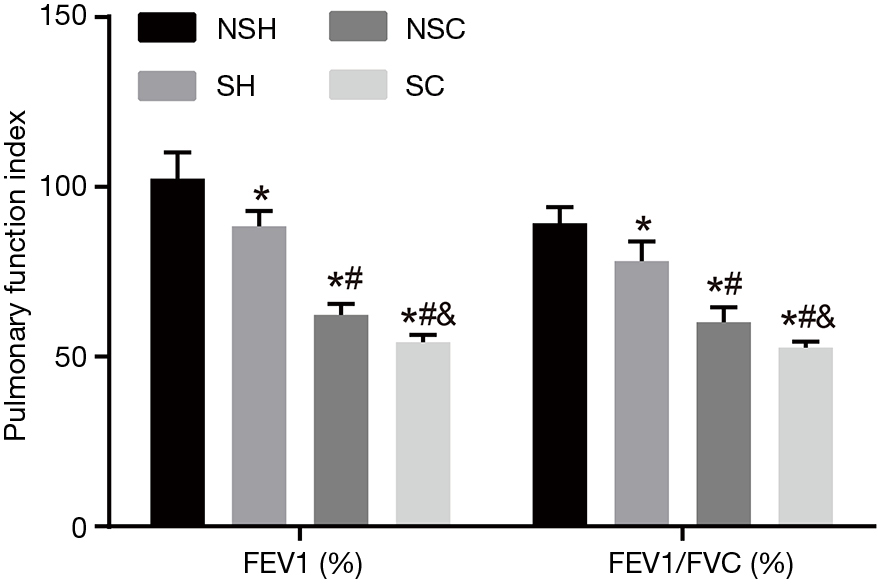 Finally, 60 days after treatment, the patients are assigned into effectiveness (n=379) and ineffectiveness (n=79) groups. To establish the Logistic regression analysis, the effectiveness of the inflammatory cells as independent variables, level of inflammatory cytokines (INF-γ, IL-17, IL-4), T cells content (Th1, Th17, Th2, CD4+CD25+Fox3+Tregs, Th1/Th2), pulmonary function indicators [FEV1 (%), FEV1/FVC (%)], smoking and Liuweibuqi capsules as the dependent variables. The results (Table 3) showed that the above factors were factors for affecting efficacy (all P<0.05).

As arise of population ages and smoking frequencies, population with COPD worldwide will increase as predicted (24). Previous studies have proved that herbal medicine relieves COPD symptoms effectively, especially for the stable COPD (25,26). In this study, we investigated how Liuweibuqi capsules act on the stable COPD patients with lung Qi deficiency. We found that Liuweibuqi capsules may relieve COPD patients effectively by stimulating the proliferation of CD4+CD25+Fox3+Tregs and increasing the ratio of Th17 so as to balance Th1/Th2 ratio and improve the lung function of COPD patients with lung Qi deficiency.

Firstly, we found that the contents of T cells (Th1, Th2 and Th17), and levels of inflammatory cytokines (INF-γ, IL-4 and IL-17) and inflammatory indicator Th1/Th2 were elevated, but the level of CD4+CD25+Fox3+Tregs was decreased of stable COPD patients. Th17 cells, different from Th1 or Th2 cells, is a subset of T cells produced from IL-17, which regarded as a critical regulator in inflammation and autoimmune diseases (27). Several studies also found that the level of Th1, Th2 and Th17 cells increased in COPD patients (28,29). IFN-γ is produced by Th1 cells, which takes part in the cell-mediated pro-inflammatory activity (30). IL-4 is an immune response-related cytokine produced by Th2 cells, which are involved in inhibiting anti-tumor immunity (31). IL-17 is found secreted from Th17 cells and neutrophils in pulmonary aspergillosis and systemic histoplasmosis (32). An imbalance of Th1/Th2 status may lead to the development of viral or bacterial infections, allergic disease and autoimmune disorders, and COPD is correlated with Th1/Th2 imbalance (28,33). Increased level of IFN-γ, IL-4, IL-17 and Th1/Th2 were also found in COPD patients in previous studies, which are consistent with the results in this study (34-37). CD4+CD25+Fox3+Tregs play an important role in creating a regulatory environment that promotes infectious tolerance and it was found to improve prognoses of acute exacerbation in COPD patients (38,39).

Secondly, smoking could increase the level of inflammatory cells, cytokines and indicator, decrease the CD4+CD25+Fox3+Tregs levels. Tregs have the potential to maintain normal lung function in smokers and may stop the progression of immune responses (40), and the level of Tregs in smokers’ lungs without lung dysfunction is more than that in people without a history of smoking (41). CD8+ T cells are inversely correlated with pulmonary function, and previous study indicated that CD8+Tregs have reverse correlation with smoking (38). Smoking may directly destroy the balance of pro-inflammatory and anti-inflammatory response via inhibiting CD8+ T cell/CD8+Tregs action (42). Cigarette cessation has been proved to be the most successful and cost-effective regimen for suppressing disease progression (43). Lung functions is generally determined by FEV1 (%), and low FEV1 in early adulthood is regarded as the genesis of COPD (44,45). We found that smoking could strengthen the correlation of FEV1 (%) and inflammatory cells, cytokines, indicator and CD4+CD25+Fox3+Tregs.

Thirdly, Liuweibuqi capsules may effectively decrease the level of inflammatory cells (Th1, Th2 and Th17), cytokines (INF-γ, IL-4 and IL-17) and indicator (Th1/Th2), and increase the level of CD4+CD25+Fox3+Tregs, indicating markedly effectiveness of treatment with Liuweibuqi capsules. Recent evidence has revealed that systemic inflammation plays vital roles in development of COPD and there are a large number of chemokines and cytokines that have been correlated to the pathogenesis of COPD, including INF-γ, IL-1β, IL-13 and IL-6 (46). The immune mechanism in COPD includes innate immune reaction and adaptive immune reaction (47). Remedium cardinales of Liuweibuqi capsules are Renshen and Huangqi (14). Ginsenosides are major active components of Ren Shen, which positively functions in anticancer, antiaging, and antiviral activities, and it also have anti-inflammatory function via inhibiting TNF receptor-associated factor 6 (48,49). A study suggested that ginsenoside Rg3 combined with acupuncture may reduce IFN-γ and it may also counteract the disorder Th1/Th2 profile (50). In TCM, one of the original causes of COPD is lung deficiency, the regimen of which is treated with supplementary Qi (14). Furthermore, Renshen and Huangqi have been proved as the popular restoratives which mainly used for symptoms due to Qi deficiency (51). Therefore, we may conclude that Liuweibuqi capsules can inhibit COPD-induced inflammatory response, providing markedly effectiveness on treatment of COPD.

Funding: This work was supported by the National Nature Science Foundation of China (Grant No. 81573942).

Ethical Statement: This study was approved by ethics committee of the First Affiliated Hospital of Anhui Medical University (2012-006). All subjects voluntarily participated in the experiment were fully informed of gains and risks and signed informed consents. This experiment was in accordance with the Nuremberg criteria and the Helsinki declaration.