Cough is among the most common reasons for which patients worldwide seek medical attention (1). Most cases of acute and subacute cough are due to acute viral upper respiratory tract infections (URI), otherwise known as the common cold. Given the sheer enormity of the problem of common cold worldwide, the medical and economic implications of cough due to this condition are of tremendous significance. Not only does acute cough due to URI result in tremendous financial expenditure, but the available treatments for acute cough are limited by lack of efficacy or, as in the case of opiates, for example, intolerable side effects at antitussive doses (2,3).

Measurement of cough reflex sensitivity has allowed insight into the effects of viral URI on human cough reflex sensitivity. Among the various provocative agents used for induction of cough in the laboratory, capsaicin, the pungent extract of red chili peppers, has gained favor as the tussive agent of choice, given its ability to induce cough in a safe (4), dose-dependent and reproducible manner (5,6). The typical end points of capsaicin inhalation challenge are C2 and C5, the concentrations of capsaicin inducing two or more, and five or more coughs, respectively. Figure 1 illustrates a typical dose-response curve generated during a capsaicin challenge study. 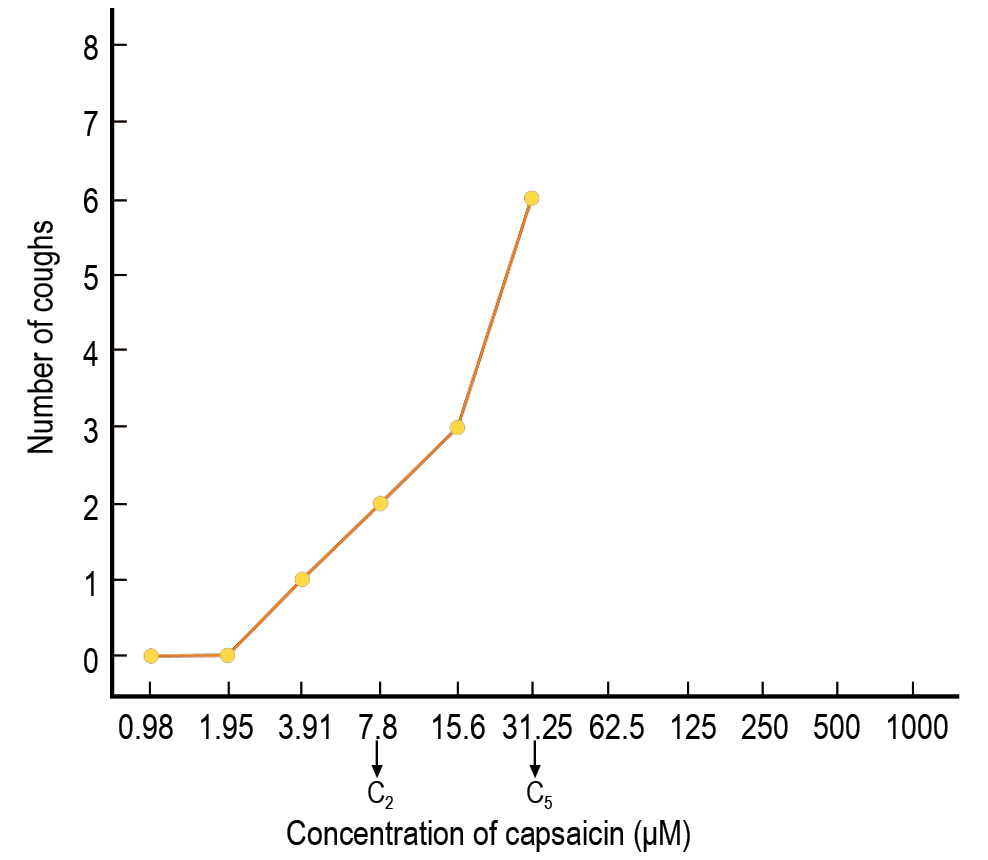 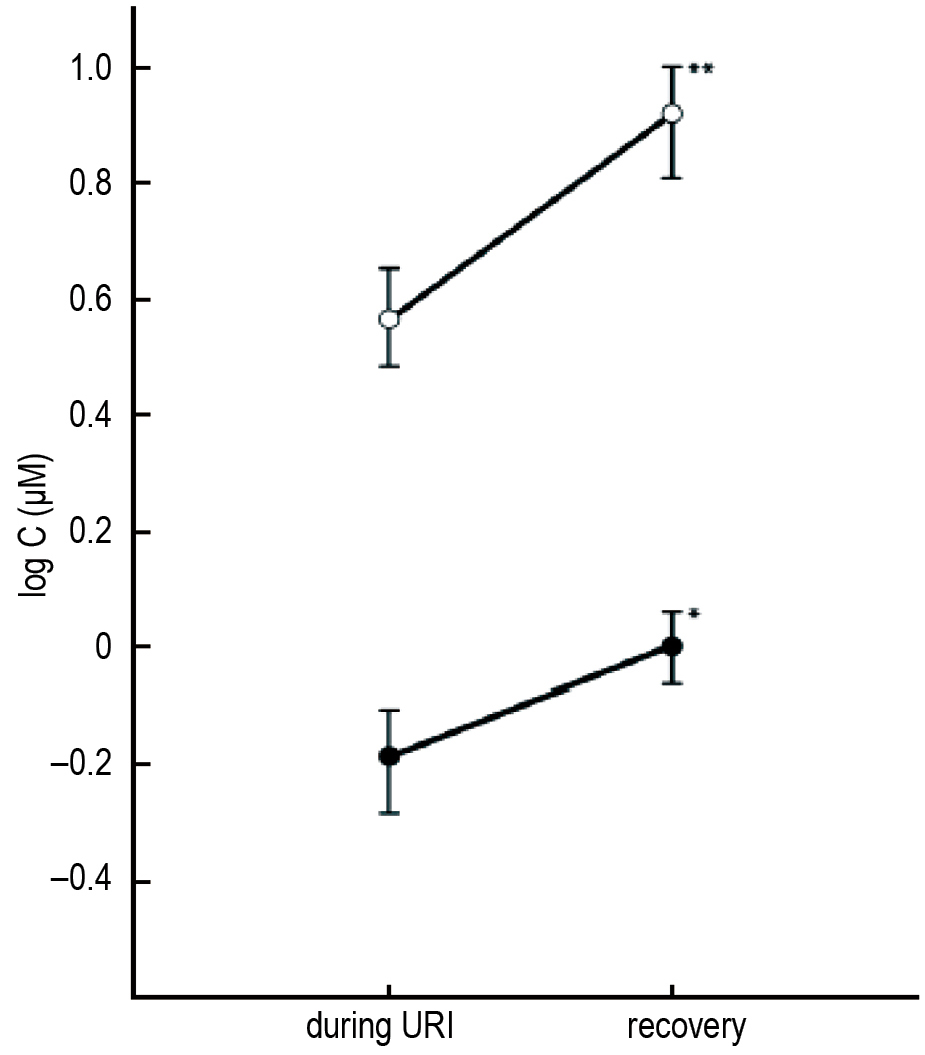 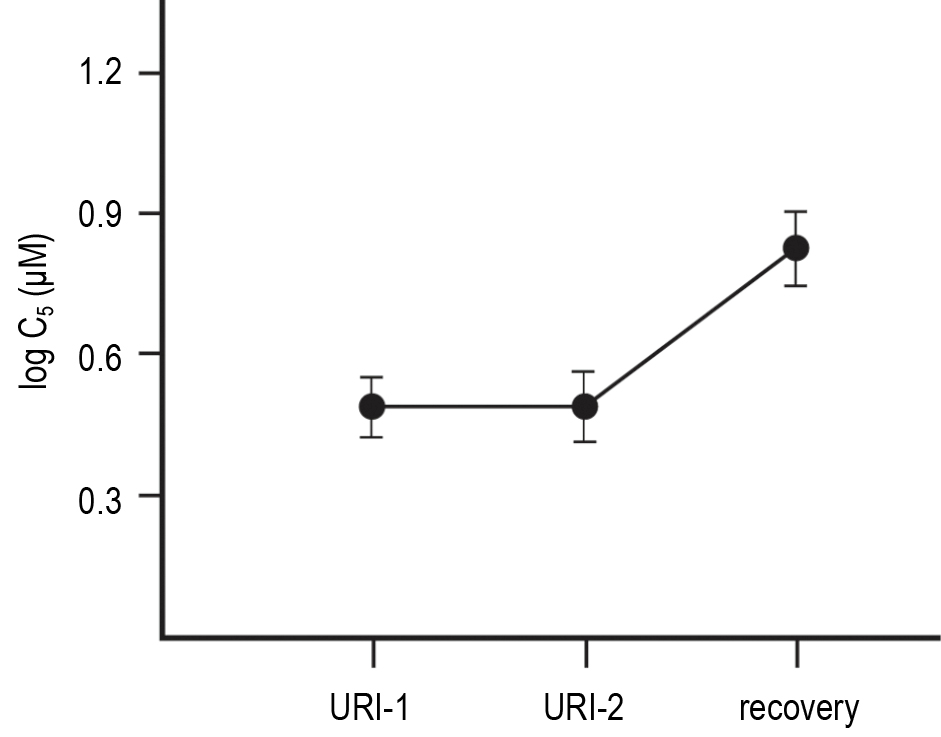 Numerous mechanisms have been proposed to explain the transient cough and enhancement of cough reflex sensitivity associated with acute viral URI (15). Direct effects of the viral infection on airway epithelium include inflammation and cytokine release. Other airway effects of URI include increase in neurotransmitter levels, such as Substance P; reduced activity of neutral endopeptidases; increased neural receptor levels (NK-1); and, transient modulation of airway neural activity. Increased leukotriene production and mucus hypersecretion are likely additional contributors to cough induction. Viral infections induce bronchoconstriction and airway hyperresponsiveness through their influence on cholinergic pathways, but the significance of these effects on cough and cough reflex sensitivity remains to be elucidated (Table 1).

It is of interest, and likely quite significant, that many patients presenting with chronic cough relate the onset of their longstanding condition to an episode of URI. The newly emerging concept of the Cough Hypersensitivity Syndrome (16-19) suggests that an underlying hypersensitivity of the cough reflex potentiates the effect of an exogenous stimulus such as acute viral URI, resulting in refractory, chronic cough in a particular subgroup of individuals whereas the same stimulus causes a merely transient cough in the great majority of the population.

Effect of viral URI on the urge-to-cough (UTC) sensation

Recently, increasing interest has focused on the sensation of irritation that precedes the motor act of coughing; this phenomenon has been termed the UTC (20-23). Studies employing functional magnetic resonance imaging in subjects administered inhaled capsaicin have demonstrated that the UTC sensation is associated with activations in a variety of cortical brain regions (24,25). As is the case with the motor cough reflex, acute viral URI has been demonstrated to induce a transient enhancement of the UTC sensation (8). As shown in Figure 2, UTC, as measured by Cu, the lowest concentration of capsaicin inducing the UTC sensation without an associated motor cough (23), is significantly enhanced during URI compared to the post-recovery state.