Despite improvements in early diagnosis and appropriate treatments such as chemotherapy, targeted therapy, and even immunotherapy for lung cancer, improvements in long-term survival of patients with lung cancer have been limited, and lung cancer remains a devastating disease (1). It is now the leading cause of cancer-related death worldwide (2,3): it leads to 1.6 million deaths annually (4,5). More than 158,000 patients died from lung cancer in the United States in 2016, which accounted for 27% of all cancer deaths (4,5). Much work needs to be done to improve the outcome of lung cancer patients. In addition to early detection and advanced treatment, intensive care unit (ICU) strategies and treatments are important because ICU admission is not uncommon for lung cancer patients with malignancy-related complications or with underlying comorbidities (6).

Factors associated with poor ICU outcomes for these patients include mechanical ventilation (MV) (7-12), poor pre-event performance status (PS) (10,13,14), high admission Acute Physiologic and Chronic Health Evaluation (APACHE) III scores with vasopressor use (11), and refractory disease (8,10,11,15). However, most of the previous studies were single-center, and their data cannot be generalized across ICUs. Moreover, few studies have examined the risk factors for lung cancer patients admitted to the ICU. Therefore, we investigated the risk factors for admission to the ICU, the infectious complications, organ dysfunction during ICU hospitalizations, and the prognosis after ICU admission among patients with lung cancer.

This retrospective, population-based cohort study used Taiwan’s National Health Insurance Research Database (NHIRD). Taiwan’s NHI program is a single-payer compulsory system currently enrolls more than 23 million of the country’s legal residents (>99.7% of Taiwan’s population (16). The NHIRD provides detailed healthcare services information about the clinical visits of each beneficiary. It uses International Classification of Diseases, Ninth Revision, Clinical Modification (ICD-9-CM) diagnostic and procedure codes. We used the NHIRD’s lung cancer database, which was constructed from the records of all patients with lung cancer and a catastrophic illness card to select cases for our study. In the NHIRD, biopsy and histological verifications are required before a definite diagnosis of carcinoma can be made and a catastrophic illness card can be obtained. Thus, because we used these criteria, the lung cancer cases selected for our study were considered valid and definite. The lung cancer database is a longitudinal subset of the NHIRD; it contains data related to inpatient and outpatient medical care, diagnoses, surgical procedures, and prescribed medications from 2003 to 2012. The study was approved by the Institutional Review Board (IRB no: 10411-E01) of Chi Mei Medical Center. Because the data used in this study are de-identified, and have been released to the public for research, the IRB waived informed consent. 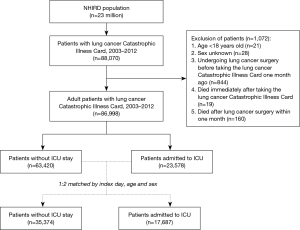 To be as comprehensive as possible when adjusting for factors that might affect outcome, we considered the following as potential confounders: sex, age, hospital accreditation, and underlying comorbidities. Comorbidities were defined according to the ICD-9-CM including diabetes mellitus (DM) [ICD-9-CM codes: 250], hyperlipidemia [272], hypertension [401–405], stroke [430–438], chronic obstructive pulmonary disease (COPD) [490–496], chronic liver disease [571], and chronic kidney disease (CKD) [585] within 1 year before their index admission. We also collected information about several other possible confounders—anticancer treatments ≤1 year of ICU admission: surgery, chemotherapy, radiotherapy, and targeted therapy; infectious diseases; and organ dysfunction by using ICD coding.

The primary endpoint of the study was one-year mortality. The definition of mortality was based on the death record from the inpatient claim dataset. Patients were followed from January 1, 2003, until the earliest onset of one of two occurrences, whichever came first: mortality or the end of the study, December 31, 2013.

All categorical variables are presented as frequencies with percentages, and the Pearson’s χ2 test or Fisher’s exact test was used to compare the differences between lung cancer patients admitted (ICU+) and not admitted (ICU–) to the ICU. Continuous variables are presented as means ± standard deviation (SD) or median with interquartile range (IQR), and a Student’s t-test or Wilcoxon rank-sum test was used to compare age and time to mortality or follow-up time. In addition, Kaplan-Meier survival curves were used for the 1-year survival rate during the study, and a log-rank test was used to compare risks between ICU+ and ICU– patients. The ratio of 1-year mortality between ICU+ and ICU– patients was estimated using Cox proportional regression models adjusted for age, sex, comorbidities, lung cancer surgery, recent anticancer treatment, infectious diseases, organ dysfunction, and hospital level. A multiple Cox regression analysis was used to find the potential predictors of 1-year mortality among ICU+ patients. SAS 9.4 (SAS Institute Inc., Cary, NC, USA) was used for all analyses. Significance was set at P<0.05. Kaplan-Meier survival curves were plotted using STATA 12 (Stata Corp., College Station, TX, USA). 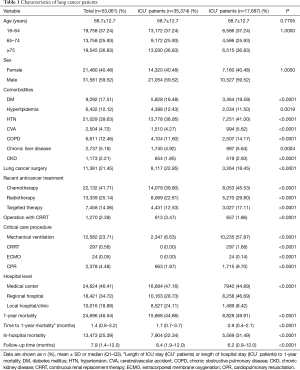 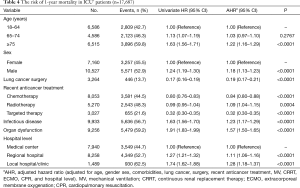 Second, we found that about 40% of ICU+ lung cancer patients had sepsis, and more than 50% had an organ dysfunction: respiratory tract infections and respiratory organ dysfunction were most common. This finding is consistent the previous study (9) of 143 lung cancer which showed that the main reasons for ICU admission were sepsis (44%) and acute respiratory failure (31%). This is reasonable (9,17,18). Overall, this kind of information will help intensivists improve treatment for ICU+ lung cancer patients.

Third, we identified several factors that indicate a poor prognosis: age, male sex, recent radiotherapy, infectious diseases, organ dysfunction, and low hospital level, some of have already been reported (9,19). Chang et al. (19) enrolling 143 patients with lung cancer and pneumonia-induced respiratory failure in a medical intensive care unit showed that history of radiotherapy (OR =2.80; 95% CI, 1.15–6.78) was associated with increased mortality. Soares et al. (9) found that number of organ failures (OR =1.96; 95% CI, 1.38–2.79) was associated with increased mortality. Previous study (20) has showed that hospital volume can affect the outcome of cancer patients undergoing anti-cancer treatment. In this study, we found that hospital level was independently associated with mortality. Even sicker patients referred to medical centers had better survival rates than did patients in regional and local hospitals. The finding is consistent with previous evidence (20) that larger hospital volume or specialty focus is associated with the better outcome of cancer patients.

Finally, we found that recent surgery, chemotherapy, and targeted therapy all lowered the mortality risk, which is consistent with other claims (6). The similar finding was noted in previous study (6) that anticancer therapy in the ICU might provide better short-term ICU survival for treatment-naïve, critically ill lung cancer patients. It is possible that the patients who were chosen to receive anti-cancer therapy may have better performance status and could tolerate the treatment-related complication than the patients who physicians cannot recommend anti-cancer therapy such as chemotherapy or surgery due to their poorer performance status. Taking all these findings together suggest that, although anticancer treatment causes complications, it will positively affect survival for some patients. However, additional studies are required to determine which specific populations will benefit from which anticancer treatments.

This study has several strengths. We studied a large sample from Taiwan’s general population, did a long-term follow-up, and included the full range of hospital levels from local clinics to medical centers. These strengths should make our findings generalizable to most Taiwanese.

However, a retrospective insurance claims database analysis also has several inherent limitations. First, the NHIRD information is provided using ICD-9 coding, not actual medical records. However, this limitation might not affect our findings, because lung cancer in this study was based on a catastrophic illness card that can be obtained only after the diagnosis is confirmed by a biopsy and histological testing. Second, we chose only first-episode ICU+ patients admitted more than once during the study period, but patients with lung cancer might be readmitted in short time-spans for anticancer treatment-related complications. Third, the criteria for ICU admission vary by hospital, especially for hospitals at different levels. This might increase heterogeneity into the study cohort. Finally, the NHIRD does not contain data about specific histologic types or stages of cancer, specific cause of death, Eastern Cooperative Oncology Group (ECOG) performance status, and we did not assess the effect of different anticancer treatments and the number of cancer-related mortality.

Ethical Statement: The study was approved by the Institutional Review Board (IRB No: 10411-E01) of Chi Mei Medical Center. Because the data used in this study are de-identified, and have been released to the public for research, the IRB waived informed consent.