Whether administered intravenously, orally, or neuraxially, opioids are an important component of most treatment regimens following thoracic surgeries. Intravenous opioid patient-controlled analgesia (PCA) systems have been demonstrated to be safe in patients having thoracic surgery (9).

The most commonly used drug in intravenous PCA is morphine. It has a very good analgesic effect but it is also associated with a number of adverse effects, including respiratory depression, excessive sedation, nausea, vomiting, ileus and constipation (9-11). Alternatively, oxycodone is becoming increasingly popular, as analgesic potency is comparable to morphine, but was reported to cause less opioids related adverse events (12-15).

The optimal pain strategy after thoracic surgery is still controversially discussed. Therefore, the aim of this is to investigate the efficacy, in terms of acute postoperative pain relief, incidence of opioid-relate adverse events and patient satisfaction scores, of continuous thoracic epidural analgesia (TEA), intravenous oxycodone PCA and intravenous morphine PCA as acute postoperative treatment in adults having antero-lateral thoracotomy.

This is a randomized, observational study was conducted in Medical University of Silesia, Poland. With approval of the Institutional Review Board (KNW/0022/KB1/23/13) and after obtaining written informed consent, we enrolled 104 patients scheduled for elective anterolateral open thoracotomy between September 2013 to June 2014.

All patients were aged between 18 and 77 years, a body mass index between 19–30 kg/m2, and had American Society of Anesthesiology (ASA) physical status between 1 and 3. Exclusion criteria were lack of consent, significant coagulopathy, contraindication to TEA or drugs used in protocol, history of chronic pain, chest wall neoplastic invasion, visible thoracic spine deformities, previous spine surgery, mental state preventing from effective use of PCA device.

Patients were randomly assigned to one out of three groups (1:1:1):

Randomization without stratification was based on computer generated codes, which were kept in sequentially numbered opaque envelopes.

All patients were premedicated with up to 15 mg midazolam orally. In patients assigned to the TEA group, the TEA at T3–T8 epidural space was placed by an experienced anesthesia attending. Standard monitoring including electrocardiogram, non-invasive blood pressure measurement and pulse oximetry was applied. General anesthesia was induced with a combination of propofol of approximately 2 mg/kg, cisatracurium at approximately 0.15 mg/kg, and fentanyl at approximately 2 µg/kg. Additional doses were given as clinically indicated. Patients were intubated using a left-sided double lumen tube in adequate size. Patients were then positioned in lateral position. Anesthesia was maintained using sevoflurane. At the end of surgery, patients were quickly weaned from mechanical ventilation and extubated. As soon as the patients arrived in the postoperative care unit (PACU), the analgesic treatment was started as indicated by the randomization before surgery and lasted for the first 48 hours after end of surgery. Patients were thereafter given 1 g paracetamol intravenously on a 6-hour interval and 100 mg ketoprofen on a 12-hour interval as a rescue medication, if necessary.

In patients assigned to the TEA group, a continuous epidural infusion consisting of 0.1% bupivacaine combined with 0.0006% fentanyl with a rate according to the modified Bromage formula (0.8 mL/hour +0.05 mL for every 5 cm of height above 150 cm for every spinal segment) was started.

Patients assigned to the MOR group, received boluses of 1–2 mg of morphine until pain visual analogic score (VAS) was at a maximum of 3 in the PACU. Afterwards the demand dose was a 1–2 mg bolus with a 5 min lockout, but no hourly limit. During the night, the basal rate was increased to 2–4 mg per hour.

Patients assigned to the OXY group, received boluses of 1 mg of oxycodone until pain VAS score was at a maximum of 3 in the PACU. Afterwards the demand dose was a 1–2 mg bolus with a 5 min lockout, but no hourly limit. During the night, the basal rate was increased to 2–4 mg per hour.

During the study period, 110 patients underwent antero-lateral thoracotomy and were screened for this study. Totally, 105 patients fulfilled inclusion and exclusion criteria’s and were randomly assigned to the three study groups, resulting in 35 patients in each group.

Overall, six patients were excluded after randomization: 2 patients from TEA group due to significant hypotension and bradycardia during surgery, 3 from MOR due to over-sedation, gastro-intestinal bleeding and urgent re-thoracotomy; and, 1 subject from OXY group failed to complete the study due to severe pain that could not be controlled by drugs allowed by the protocol.

Finally, ninety-nine patients (47 men and 52 female) with an age of 63±9 years, and a BMI of 26±4 kg/m2 completed the study. Demographics and main clinical findings are presented in Table 1. There were no significant differences between groups in age, gender, and ASA physical status. BMI was lower in MOR compared to patients assigned to OXY (24.6±3.9 vs. 27.4±3.3 kg/m2, P<0.05). Systemic arterial pressure was lower in TEA compared to the other two intravenous analgesia groups; but was similar between MOR and OXY groups (Table 2). Pain control was better achieved in the TEA, compared to the OXY and the MOR group (Tables 3,4). It is important to notice that at all-time points, depth of sedation (Figure 1) and analgesia rescue (Figure 2) were higher in the MOR group than in the other 2 groups (P<0.05). In terms of patient satisfaction, TEA had higher rate (5 points) than intravenous PCA analgesia groups (4 points in the Likert scale) (χ2=15.8; P<0.01; Table 5). 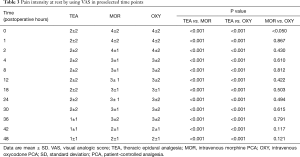 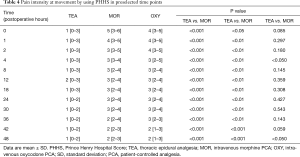 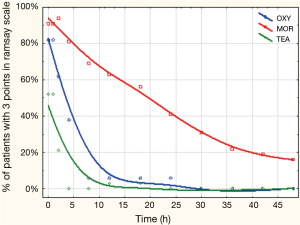 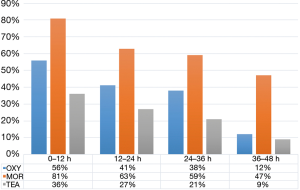 The main findings of our study are: (I) TEA was associated with a higher incidence of hypotension, but it provides a better analgesic control at both rest and movement, with lower sedation and higher patient satisfaction; (II) compared to morphine, oxycodone induces less hypotension and achieves better analgesic control at hour 4 and 48 with less sedation and opioid related adverse events.

Hypotension and bradycardia are common complications after central blockades. According to Carpenter et al. (23), the risk factors include high level of epidural blockade (T5 and above) and age (over 40 years old). Fanelli et al. (24), added ASA status II or above to the risk factors of hypotension and bradycardia. As previously reported (7,23-26), we observed TEA with local anesthetic infusion was associated with significantly lower systolic blood pressure than the intravenous analgesia groups. However, there was no such effect between OXY and MOR group. Similar results are described by Gaszyński et al. (27), who found no significant difference on impact on systolic blood pressure between patients receiving oxycodone and morphine for postoperative analgesia after gastrectomy (27). Analysis of changes in blood pressure in time revealed that from 2 hours of observation, patients in OXY group had significantly lower blood pressure values than baseline. This finding is not supported by any other reports and it needs further investigation on a larger study population. Analysis of diastolic blood pressure values also revealed significantly lower values at started time in TEA group compared to MOR and OXY group. There were no differences between MOR and OXY group. Contrary to previous study (13), which described significantly lower values of mean blood pressure in patients receiving morphine after abdominal surgery; we are compatible with Gaszyński et al. (27), who reported no difference in diastolic blood pressure between patients receiving morphine and oxycodone. Analysis of heart rate changes did not reveal any differences between the groups. These results are in concordance with previous reports (27,28). However, we first reported a significant rise in heart rate beginning from 24 hours of observation in TEA and OXY group, which can be explained by a significantly lower level of sedation in those groups which can transfer to a higher physical activity of patients. To conclude it is important to state that there were no incidents of hypotension below 90 mmHg systolic blood pressure (SBP) or bradycardia. The most stable influence on circulatory system was observed in MF group. It can be credited to the highest sedation level in this

Epidural analgesia is still considered a gold standard in treating pain after thoracic procedures (8,29). In many studies and systematic reviews there are evidence of superiority of this technique compared to other methods of relieving acute postoperative pain (8,11,30). Moreover, some of those papers state that the quality of life of the patients that were treated with epidural analgesia (30). Our study also supports this thesis TEA with bupivacaine and fentanyl significantly decreased pain levels at rest and movement (by using VAS and PHHPS, respectively) compared to PCA delivered systemic opioid analgesia. Difference in outcome is probably associated with a different patient population and kind of surgery.

Our data analysis did not reveal any difference in pain intensity at rest (VAS) between patients treated with morphine and oxycodone. Similar results are previously described in neurosurgery (31), and in abdominal surgery (11,12,32).

Introducing early postoperative physiotherapy is crucial for avoiding serious respiratory complications after thoracic surgery (5,33), but it also increases the intensity of postoperative pain. We showed, TEA was more effective in controlling pain during physiotherapy than both intravenous analgesia groups; but we didn’t find any clinical significant difference between morphine and oxycodone groups which demonstrate similar antinociceptive potency of those substances.

Excessive sedation is one of the most common adverse events occurring during systemic opioid therapy (34). It is particularly dangerous in thoracic patient population because it increases the risk of developing serious respiratory complications like respiratory depression, sputum retention and infection (5,8,33). In our study, patients in TEA and OXY group showed significantly lower sedation than those MOR groups, without significant differences between TEA and OXY groups. Our results are opposite to other studies (12,31,35), which found no differences in sedation between patients receiving epidural bupivacaine vs. systemic morphine (35), and neither between systemic morphine (31), fentanyl (12) and remifentanil (36) vs. oxycodone. However, they are supported by pharmacokinetics of oxycodone which is metabolized without any active derivatives that could augment sedation (37).

Effective pain management must also include breakthrough pain treatment. This kind of pain is not only unpleasant for the patient but it also requires more involvement form the medical staff and is difficult to alleviate. This is the reason why we should choose drugs with the lowest risk of breakthrough pain occurrence. Our data showed significant decrease in the necessity of a rescue drug in TEA and OXY groups but we found no differences in distribution of rescue analgesia in all three study groups. In addition, we observed that using morphine is connected with a significantly higher probability of needing rescue analgesia compared to oxycodone or epidural analgesia (6 and 8 times higher respectively). These findings were previously reported: (I) epidural analgesia is associated with lower need of rescue analgesia (38); (II) opioid drugs have different need of rescue analgesia (28); and (III) oxycodone has longer duration in nociceptive effect than morphine (13). This phenomenon can be attributed to a high concentration of a free fraction of oxycodone in cerebrospinal fluid—it is 6 times higher than morphine with comparable blood concentration. Easy penetration of blood-brain barrier makes an analgesic potential of oxycodone higher that of morphine (10,39,40).

Regarding pain management safety, opioid-related adverse effects, we found no significant difference between the groups 48 postoperative hours. This is similar to the results presented by other authors (12,28,31,41,42), who investigated adverse events associated with oxycodone and morphine use and conclude similarity in adverse events profile of both. In terms of patient satisfaction, by using Likert scale (22), we found patients in TEA group were the most satisfied with their pain treatment compared to OXY and MOR group. This is consistent with Cassady et al. (32) but not with Ali et al. (30) who found similar satisfaction with epidural compared to intravenous opioid analgesia.

In our study TEA is the most effective analgesic technique in postoperative pain management after anterolateral thoracotomy, Efficacy of intravenous morphine and oxycodone PCA is similar but there is higher level of sedation and probability of needing additional rescue analgesia when using morphine compared to oxycodone PCA. Finally, patient satisfaction is better with TEA, with no differences between morphine and oxycodone groups.

Ethical Statement: The study was approved by the Institutional Review Board (KNW/0022/KB1/23/13) and written informed consent was obtained from the patients.