Upper lobe preservation in the treatment of centrally located NSCLC: one more challenge in lung-sparing surgery?

Nowadays, the paradigms have evolved, and gaining interest are surgical techniques that allow parenchyma preservation in the treatment of non-small cell lung cancer (NSCLC) in fit-for-surgery patients. For centrally located tumors, defined as central infiltrating NSCLC in contact with hilar structures (2), the use of technical artifice to avoid pneumonectomy is spreading.

SSL and ESL lobectomy can be associated with angioplasty of the pulmonary artery, such as lateral resection or resection-anastomosis or replacement, in a last-ditch effort for parenchyma preservation (10).

We have already addressed the advantages and the technical issues of single and extended sleeve lobectomy (11).

The article we comment on (14) is the first to assess specifically the operative and oncological outcome of upper lobe bronchus re-implantation. The team, expert in the domain of parenchyma preservation (15,16), combined under the term of Y-sleeve lobectomy the re-implantation of the upper lobe bronchus after an inferior left lobectomy (SSL) or an inferior right bilobectomy (ESL type D). ESL type C cases were not included in the study (Figure 1). 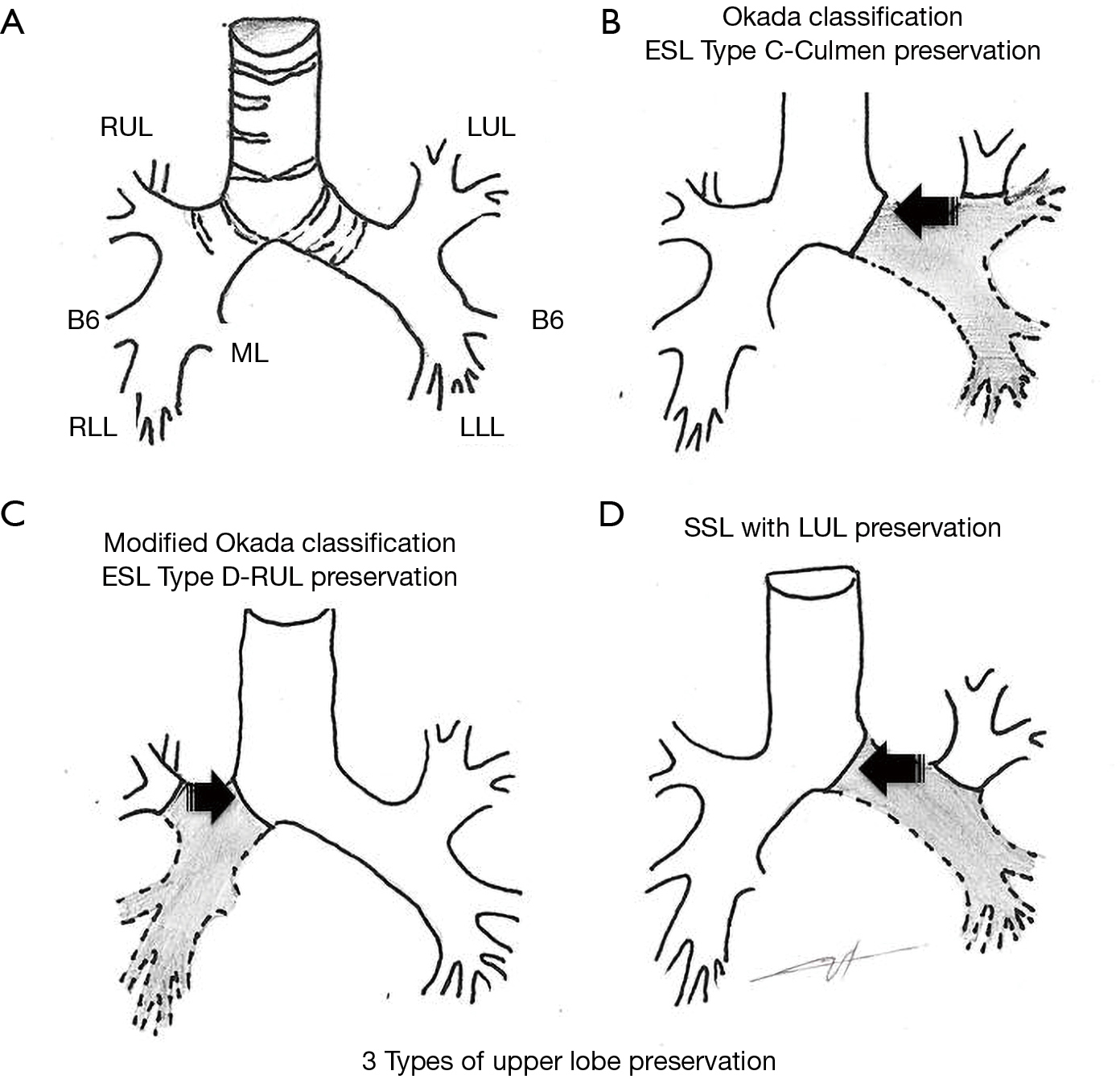 Pre-operative work-up comprised a systematic fiber-optic endoscopy immediately before surgery, and an injected CT-scan. The authors used PET-TDM as soon as it became available in their center in 2004, but only in cases where the “presence of metastases was in doubt”. There was no systematic invasive assessment of mediastinal lymph nodes. Videomediastinoscopy was performed in the case where mediastinal or subcarinal lymph nodes appeared greater than 1.5 cm on the CT-scan. Patients treated with neo-adjuvant chemotherapy had no systematic invasive re-evaluation of lymph-node status at the end of the treatment.

Regarding surgical management, the authors described the main technical issues shared by upper lobe preservations (Figure 1). One key point of most sleeve resections is the necessity to preserve good vascularization of proximal and distal bronchial stumps. To do so, minimal peri bronchial dissection of the distal stump and conservation of a short mainstem bronchus stump is fairly consensual to reduce anastomotic complications. In this series, Maurizi et al. divided the right mainstem bronchus immediately above the origin of the upper lobe bronchus. On the one hand, one can expect a higher risk of bronchial fistula related to the poor vascularization of a long mainstem bronchus stump; on the other hand, direct anastomosis of the distal mainstem bronchus and the origin of upper lobe bronchus would result in a simplified management of stump caliber and shape discrepancy.

To the best of our knowledge this is the first expert surgical team in lung sparing techniques that did not report any artifice to deal with bronchial mismatch. The team performed interrupted absorbable suture, beginning at the junction between the cartilage and the membranous portion of the bronchi, and adjusting point positions.

Maurizi et al. (14) consider the management of the bronchial axis and the avoidance of bronchus twisting to be the greatest challenges in Y-sleeve lobectomy. We consider that both have to be anticipated at the time of the section of the bronchus, by cutting the main bronchus transversally, and using oblique bronchiotomy for the upper lobe bronchus, respecting the trifurcation of the right upper lobe bronchus and the lingual bifurcation on the left side.

The management of the tension of the anastomosis is not an issue for upper lobe re-implantation compared to other sleeve resections, and there is no use in performing any specific releasing manoeuver of the remaining lobes.

Despite these technical difficulties, the post-operative mortality rate was on the order of 3.6% (n=1), and morbidity was 25% (n=7) with only three major complications (one myocardial infarction, one bronchopleural fistula, and one anastomotic stenosis). The level of post-operative complications was comparable to that of the other series (4). The only patient who died was said to have been “unfit for pneumonectomy” with no other specific characteristics precluding this intervention. To this day, there is no available publication or recommendation that indicates sleeve lobectomy in patients unfit for pneumonectomy because of respiratory function impairment. Pneumonectomy is still an option when parenchyma sparing techniques for centrally located tumors are planned, in the case of positive margins on per-operative frozen section analysis.

All the resections were R0, but 6 patients (25%) were stage IIIA at the final pathological analysis, with all having N2 status. Nine patients received an adjuvant treatment.

They described no bronchial recurrence after a mean follow-up of 46 months (range, 2–117 months).

The global recurrence rate was 32%. The five-year overall survival rate was reported at 83.3% for stage I, 55.6% for stage II and 0% for stage IIIA NSCLC. Those results are comparable to those of other sleeve lobectomy or pneumonectomy series (3).

Five-year overall and disease-free survival rates were 0% for the 6 IIIA/N2 patients, with two of them having received induction therapy. This present finding consolidates the findings of previous, multiple studies on survival after sleeve-resection: N2 status is a powerful predictor of poor survival (17). Both this high proportion of N2 disease (25%) for a surgical series and the low proportion of diagnosis of N2 status before surgery (2/6) give credit to the recommendation of the European Society of Thoracic Surgeons (18), which advises systematic invasive exploration (endobronchial ultrasonography or video-mediastinoscopy) for centrally located lesions, whether or not there are suspicious lymph nodes on the pre-operative CT +/− PET-scan. N2 patients require particular attention and very specific treatment protocols, and surgery should not be intended in the case of N2 persisting disease after induction treatment. Systematic invasive mediastinal re-evaluation should be part of the pre-surgical work-up.

Despite its heterogeneity, its limited number of patients included over a wide study period and its retrospective nature, this series is the first one to give specific post-operative and long-term survival information about Y-sleeve lobectomy.

The report confirms the reliability of sleeve resection compared to pneumonectomy in the treatment of proximal NSCL in a global policy of parenchyma preservation, with satisfying oncological results.