Meanwhile, several reports regarding surgery for pN2 disease have been published (8-10). For instance, direct lymphatic drainage from a primary tumor to the right paratracheal or aortic window lymph nodes is often noted in pN2 disease (8,9). N2 disease without N1 disease is known as “skip N2” disease. Among patients with pN2 disease, those with skip N2 disease have a better prognosis than those with N1 and N2 disease (10). However, few studies have been reported on clinical skip N2 disease based on results of modern radiological examinations, including positron emission tomography (PET). In this multi-institutional retrospective study, we investigated the outcomes of upfront surgery in patients with c-skip N2 and a tumor in the right upper lobe or left upper segment based on results of modern radiological examinations.

In this study, data from 12 different thoracic surgery departments belonging to the Thoracic Surgery Study Group of Osaka University were analyzed. In total, 6,042 patients underwent pulmonary resection for NSCLC between January 2006 and December 2013. The inclusion criteria were as follows: (I) upfront surgery for cN2 NSCLC, (II) lobectomy or pneumonectomy, (III) systematic or lobe-specific lymph node dissection, (IV) cN2 NSCLC diagnosed via computed tomography (CT) and PET, and (V) curative resection. Patients who underwent segmentectomy or wedge resection and those who only underwent lymph node sampling were excluded. In this study, the patients were not necessarily diagnosed with pathological N2 via endobronchial ultrasound-guided transbronchial needle aspiration (EBUS-TBNA) or mediastinoscopy.

All patients with potentially resectable NSCLC underwent CT and PET before surgery. The criterion for lymph node positivity was the shortest nodal diameter of ≥10 mm on CT (11) or a metabolic activity of nodes higher than that of adjacent normal mediastinal and soft tissue on PET (12). Patients with cN2 disease were diagnosed according to each institutional clinical conference or cancer board.

This study was a multi-institutional retrospective one, and operative indications for pulmonary resection were referred to each institution in detail. Whether pulmonary resection was performed through thoracotomy or video-assisted thoracic surgery was decided on a case-to-cases basis and the judgment of the attending physician of each institution. Follow-up varied in this study. However, patient treatment was based on the guidelines for lung cancer stipulated by the Japan Lung Cancer Society. The clinical and pathological stages were determined according to the 7th edition of the Union Internationale Contre le Cancer TNM staging system supported by the International Association for the Study of Lung Cancer (13).

The study protocol was approved by the institutional review boards of all participating hospitals, including that of the Ethics Committee of Osaka University Hospital (No. 16141) and Yao Municipal Hospital (H28-20). Patients were duly informed of the decision-making process for the treatment.

Associations among variables were analyzed using χ2 and Student’s t-tests. OS was defined as the time between the date of pulmonary resection and date of death. To identify prognostic factors after pulmonary resection, survival curves and survival rates (i.e., 5-year OS) were estimated using the Kaplan-Meier method. Log-rank tests were used to compare survival across the levels of categorical variables. To counteract the arbitrariness of choosing a threshold and dichotomizing, the effects of continuous variables on survival were also evaluated using Cox proportional hazards models. In multivariate analyses of categoric variables, Cox proportional hazards models with the stepwise selection method were used. All P values <0.05 were considered statistically significant. All statistical analyses were conducted using JMP software, version 9.0 (SAS Institute, Cary, NC, USA).

Initially, data were obtained for 137 consecutive patients with cN2 disease who underwent upfront surgery at the 12 institutions. After reviewing the data for eligibility, completeness, and consistency, patients with sarcomatoid carcinoma (n=3), those who had undergone segmentectomy (n=1), and those who had undergone R1/R2 resection (n=4) were excluded. Among the remaining 129 patients, 94 who underwent PET were evaluated (Figure 1). 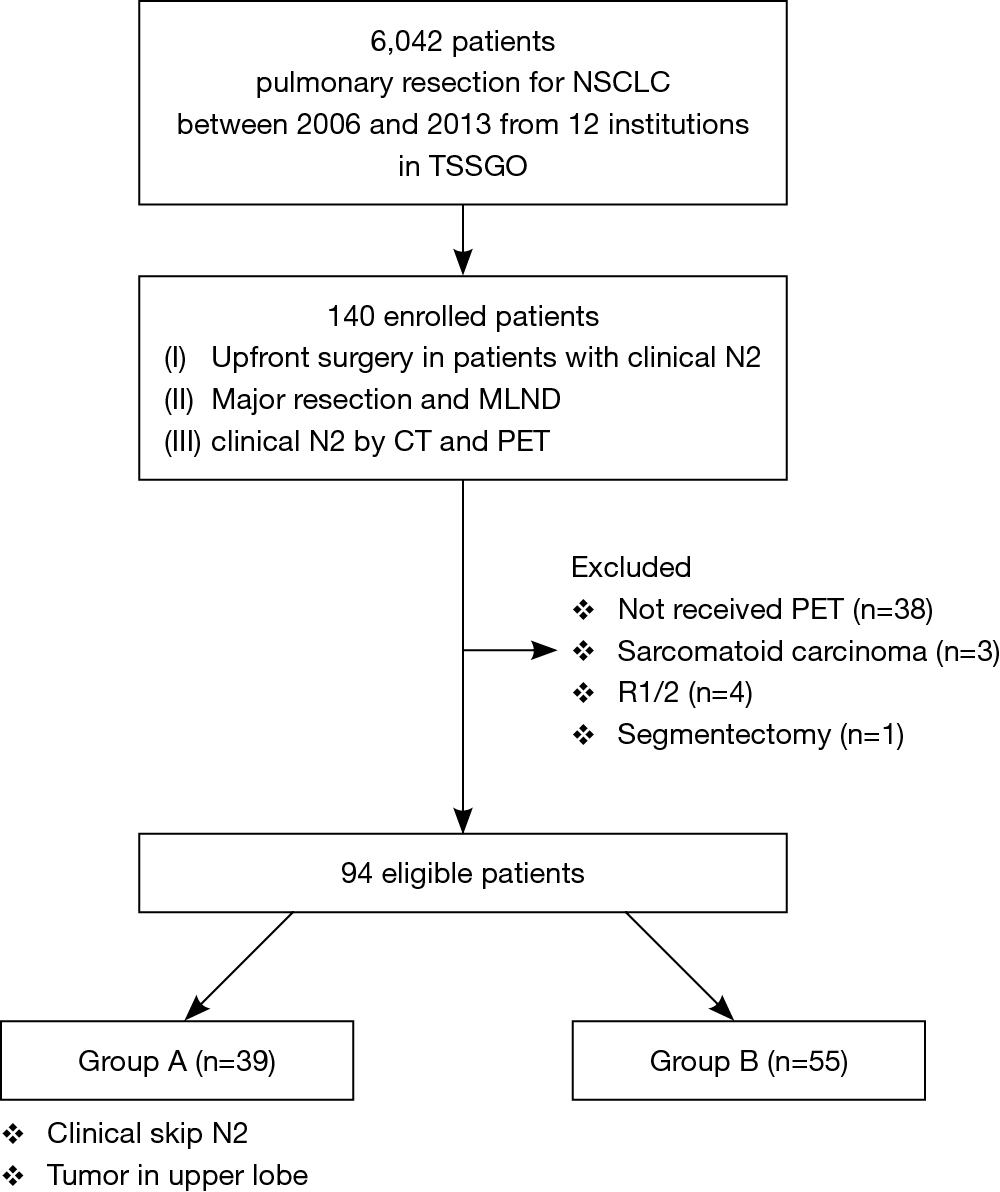 Table 2 shows the surgical procedure, pathological N status, and postoperative therapy of the patients. In total, 22 patients (23.4%) had clinical N2 and pathological N0 or N1 (cN2pN0/1) and 70 (74.5%) had cN2pN2. Of the 70 patients with cN2pN2 disease, 41 (58.6%) had pathologically single N2 disease, and 39 patients (55.7%) received adjuvant chemotherapy. Seventeen patients had EGFR mutation and 20 received molecular-targeted therapy throughout survival. 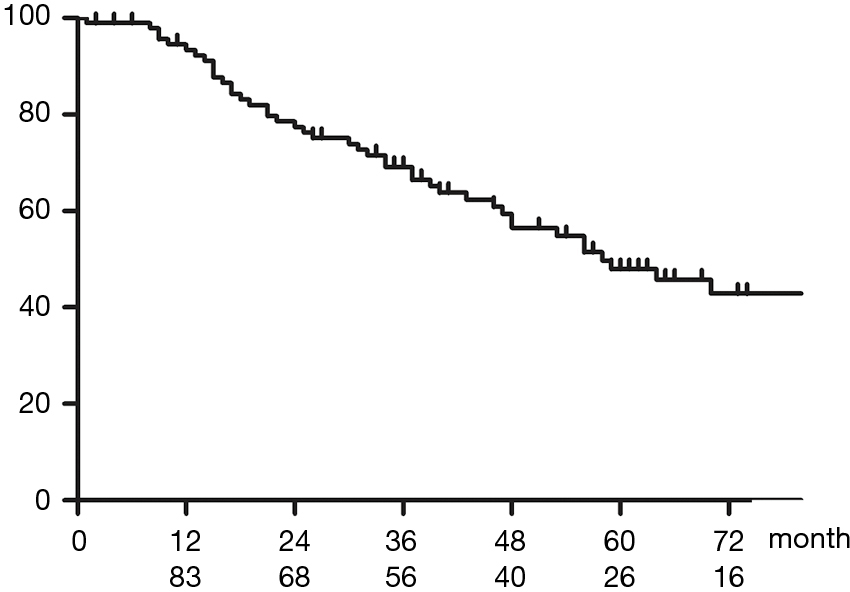 Figure 2 OS in all patients who underwent upfront surgery for cN2. The 5-year OS rate was 47.9%, and the median OS was 58 months. OS, overall survival. 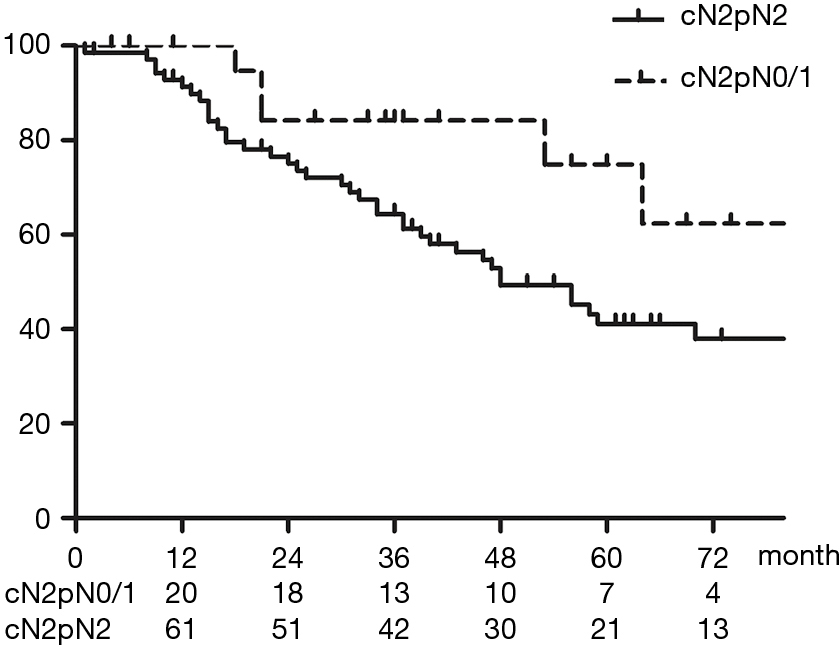 Table 3 shows the results of the univariate analysis of the 5-year OS for patients who underwent upfront surgery for cN2 disease. No significant differences in age, sex, smoking history, histology, CEA level, tumor size, and clinical lymph node were noted when these parameters were dichotomized, but patients in Group A had a significantly better prognosis than those in Group B (P=0.039). 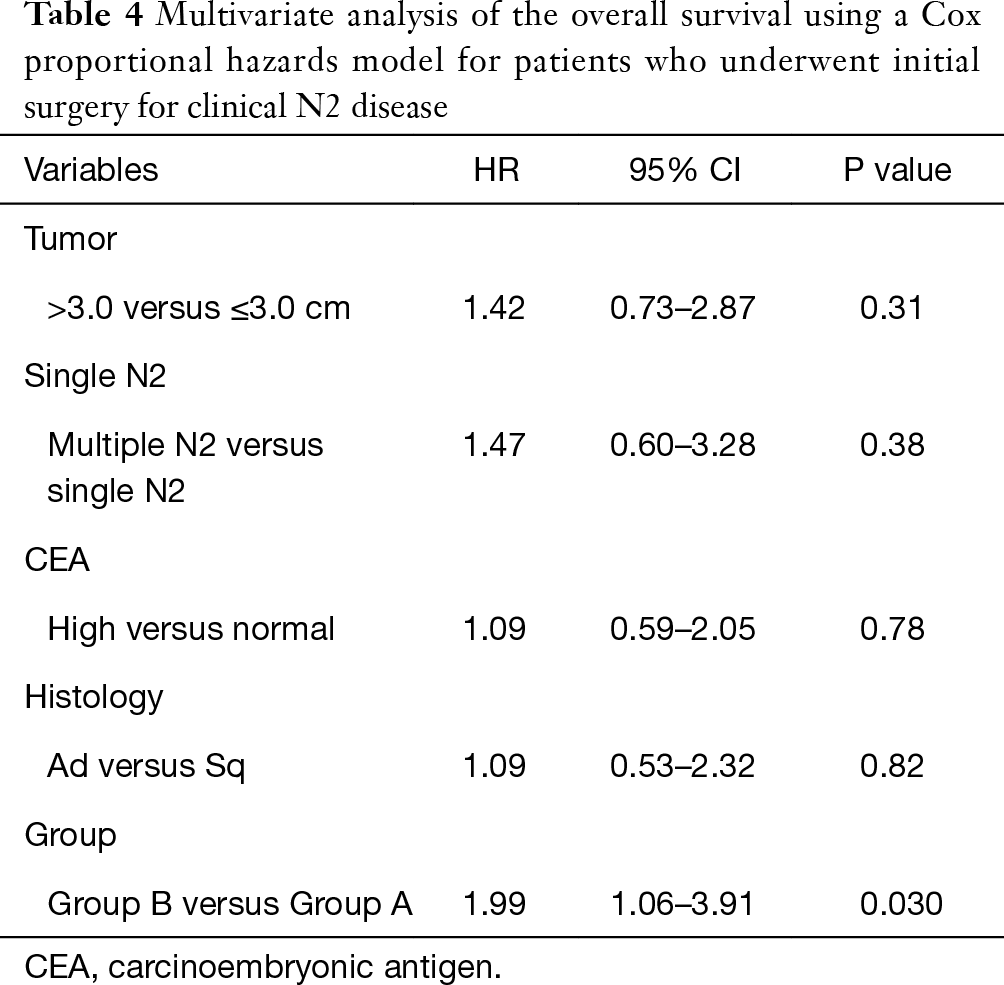 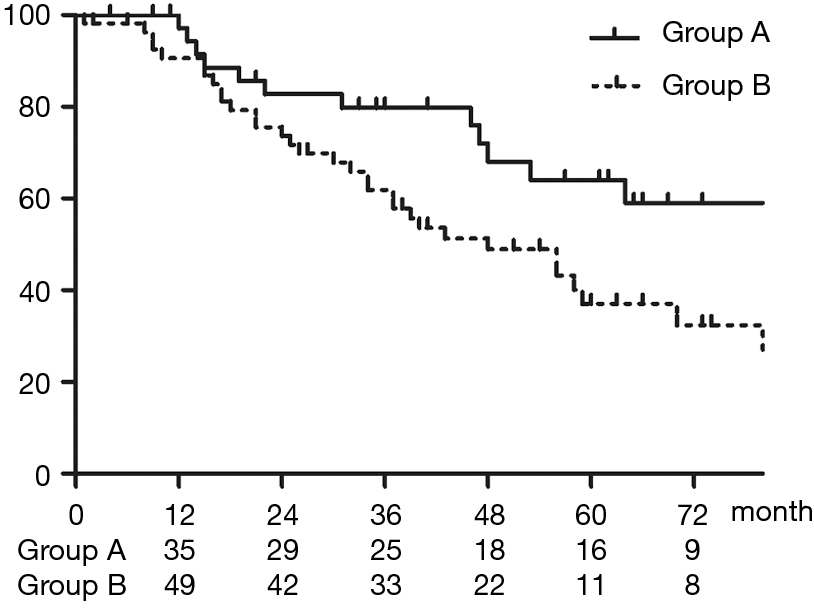 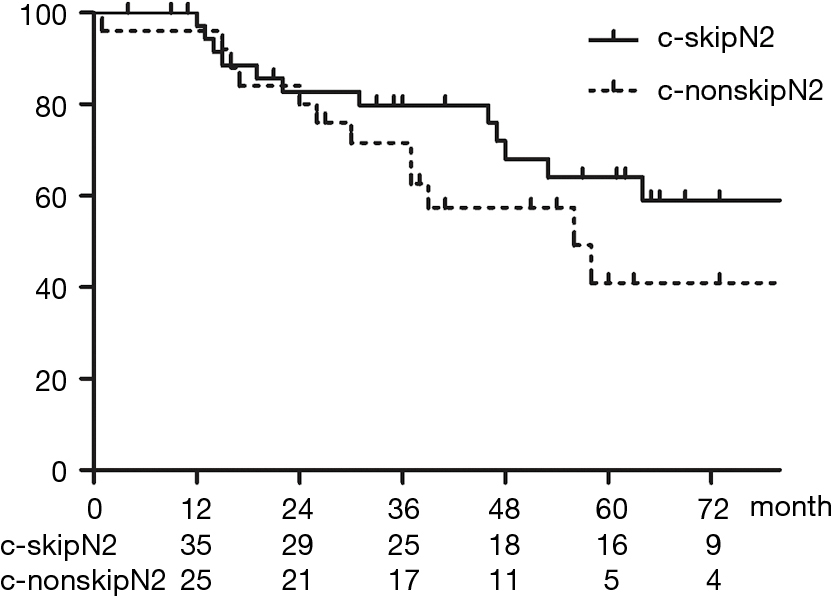 In this study, we revealed that patients with cN2 disease in the specific group had a more favorable prognosis and that upfront surgery may be a treatment option for such selected patients with NSCLC in the specific group. Patients with cN2 NSCLC have poor survival rates after tumor resection (14-18). Some studies have reported the outcomes of chemotherapy or chemoradiotherapy followed by surgery in a clinical trial setting (19,20); however, the role of surgery in treating cN2 disease remains controversial. Furthermore, concurrent chemoradiotherapy for stage IIIA NSCLC resulted in an approximately 15–20% 5-year OS (21,22). Based on these results, guidelines in Western countries (1,2) recommend chemoradiotherapy for patients with cN2 stage IIIA NSCLC. Induction therapy followed by surgery is among the treatment options in a clinical trial. However, patients with resectable N2 disease sometimes undergo upfront surgery. In fact, there are several reports on upfront surgery for such patients (3-5). However, no large-scale study has reported whether modern radiologic examinations, including PET, improved treatment outcomes of surgery for cN2 disease. Thus, we evaluated the current treatment outcomes of upfront surgery for cN2 disease.

PET has been widely used as a preoperative examination modality for lung cancer in the past decade. This study was designed to assess the treatment outcomes in patients for whom PET was used as a preoperative examination. PET is useful for assessing metastasis of the mediastinal lymph node, and a meta-analysis indicated that the accuracy of PET in diagnosing mediastinal lymph node metastasis ranged from 71% to 85% (12). In the present study, the accuracy of PET in detecting mediastinal lymph node metastasis is 74.4%, which is similar to that previously reported. Notably, in terms of patients with cN2pN2 disease, the prevalence (74.4%) of pathological N2 disease found in this study was higher than that found in a previous study (46.3%) (5). In addition, the prevalence of pathological single N2 disease in this study was higher than that in previous reports (4,5,16,17). We believe that this result can be attributed to the use of PET as a diagnostic modality in our study.

The prevalence of pathological N2 disease in Group A was higher than that in Group B but the pathological N factor did not differ significantly between the two groups. Univariate analysis for the 5-year OS revealed that patients in Group A had a significantly better prognosis than those in Group B (P=0.039). Moreover, multivariate analysis showed that Group A was a significant prognostic factor (P=0.030). Therefore, we think that our results about upfront surgery for selective cN2 disease may have considerable importance.

Induction therapy has several potential advantages, such as increased tumor sensitivity to chemotherapy, decreased tumor volume to enable better local control after subsequent surgery, rapid eradication of clinically undetected micrometastases, and better tolerance and compliance than postsurgical treatments (26). However, induction therapy also has the disadvantage of increasing the likelihood of postoperative complications. This disadvantage may be negated, however, if initial surgery is performed for patients with cN2 disease.

Before induction therapy, patients must undergo invasive examinations such as EBUS-TBNA, mediastinoscopy, or video-assisted thoracotomy. The tumors should be pathologically confirmed as N2 disease. However, such invasive examinations are also associated with complications, require additional hospital time, and incur more costs to the patient before surgery (27). In this study, of the 94 patients with cN2 disease, 22 had false-positive N2 disease. If patients with false-positive N2 received EBUS of the mediastinal lymph nodes, then they might have been identified with N0 or N1 before surgery.

Immunotherapy, immune check point therapy targeting programmed death receptor ligand (PD-L1), for nonsurgical NSCLC was effective (28). PD-L1 expression by tumor or immune cells is an important biomarker for predicting treatment response. However, a significant proportion of patients with a diagnosis of lung adenocarcinoma present a heterogeneous staining pattern for PD-L1 (29). Therefore, it is worthwhile to get an entire sample by upfront surgery rather than obtaining a sample by biopsy.

Although multimodality treatment is recommended for patients with N2 disease, such an approach will be difficult for elderly patients or those with a poor performance status. Moreover, patients with interstitial pneumonia or severe emphysema are not eligible for chemoradiotherapy or radiotherapy because of an increased risk for respiratory failure. In clinical practice, high-risk patients should be treated via surgical treatment alone or given the best palliative care. Hence, surgical treatment is sometimes unavoidable for these patients. In the present study, of 70 patients with cN2pN2, 11 (15.7%) were aged >75 years and 25 (35.7%) had severe pulmonary diseases such as emphysema or interstitial pneumonia. As result, only 31 patients (44.2%) did not receive adjuvant chemotherapy.

Molecular-targeted therapy for NSCLC has drastically improved patient survival. Among patients with EGFR mutation-positive cancer, those who receive EGFR tyrosine kinase inhibitor had better progression-free survival than those who received standard chemotherapy (30,31). In the present study, 17 (18.9%) patients had EGFR mutation-positive cancer, and 20 patients (21.3%) received molecular-targeted therapy for postoperative recurrence. As shown in Figure 2, this may be associated with the better prognosis observed in this study than those in previous reports.

This study had some limitations that should be considered when interpreting the results. First, this was a retrospective multicenter cohort study, which included various biases. Patient selection bias cannot be excluded, as mentioned previously. Upfront surgery was performed according to the judgment of members of each individual institute, but it was performed following fulfilment of criteria that were based on protocols. Second, no control group with the same background was set for comparison. To clarify the superiority of upfront surgery to standard chemoradiotherapy for patients with specific cN2 disease, a prospective randomized trial is necessary.

Upfront surgery might be acceptable as a treatment option for selected patients with cN2 disease.

Ethical Statement: The study protocol was approved by the institutional review boards of all participating hospitals, including that of the Ethics Committee of Osaka University Hospital (No. 16141) and Yao Municipal Hospital (H28-20). Patients were duly informed of the decision-making process for the treatment.