Chronic obstructive pulmonary disease (COPD) is a chronic disease characterized by persistent respiratory symptoms and airflow limitation (1). Spirometric measurement of an after-bronchodilator (ABD) forced expiratory volume in one second to forced vital capacity ratio (FEV1/FVC) <0.7 confirms the presence of persistent airflow limitation. Airflow limitation leads to a decreased FEV1, which is used to grade airflow limitation severity into global initiative for chronic obstructive lung disease (GOLD) stages 1–4 (1). FEV1 is extensively applied in the aspects of COPD, including disease severity evaluation, bronchodilators reversibility estimation, and exacerbation prediction (1-3). However, FEV1 is poorly associated with symptoms, impairment of a patient’s health status and may not be a reliable descriptor of disease status for COPD (1,4,5).

Besides FEV1, FVC is another critical spirometric indicator. FVC is a volume parameter, which improves more significantly than FEV1 after inhalation of bronchodilator and identified a larger percentage of patients with significant responsiveness (6-8). Except for decreased FEV1 and FEV1/FVC, descending FVC is another common lung function manifestation in COPD. The obstruction of airway and the loss of lung recoil contribute to the increase in total lung capacity (TLC), while a decreased FVC results in an increasing residual volume (RV), which leads to the pathophysiologic condition of lung hyperinflation (9). Lung hyperinflation is associated with increased dyspnea, limitation of exercise capacity and frequent exacerbations (9-11). Therefore, identifying patients who have significant improvement of FVC will bring important clinical implications.

Thirteen twenty-nine outpatients with stable COPD were retrospectively included, who were diagnosed by pulmonary physicians in the First Affiliated Hospital of Guangzhou Medical University between January 2011 and June 2015. All included participants met the following criteria: age ≥40 years; ABD FEV1/FVC <0.7; respiratory symptoms keep stable and without respiratory infection within the last 4 weeks. Non-inclusion criteria were as following: a history of pulmonary resection or significant diseases other than COPD that might influence the patients to perform PFT. All the included 1,329 patients performed bronchodilation tests and 405 of them performed lung volume tests before bronchodilation tests. Patients who finished lung volume tests have been the subjects of previous study on different aspects (8).

Equipment (Jaeger Masterscreen Body, BD, Germany; Cosmed Quark PFT, COSMED, Italy) met the criteria of the American thoracic society and the European respiratory society (14,15). Before PFT, patients were required to withdraw short- and long-acting bronchodilators (for ≥6 and ≥24 hours, respectively), short- and long-acting theophylline (for ≥24 and ≥48 hours, respectively), antileukotrienes (for ≥48 hours), and avoid smoking, exercise, and tea/coffee (for ≥4 hours).

Lung volumes (RV and TLC) were randomly tested by body plethysmograph method or multiple-breath N2 washout method, which were described previously (8). After lung volume test, spirometries were performed before and 20–30 minutes after inhaling 400 µg salbutamol via metered dose inhaler. Predicted values of FVC and FEV1 were selected from the reference values for spirometry in Chinese population (16).

Data were analyzed using SPSS 18.0 software (SPSS Inc., Chicago, IL, USA). Variables were presented as mean ± standard deviation (SD) or as proportions unless otherwise specified. Categorical variables were analyzed by Chi-square test or Fisher’s exact test. Variables showed normal distribution were analyzed by unpaired t-test or analysis of variance (ANOVA), and Student’s-Newman-Keuls tests or Tamhane’s T2 tests were further used for multiple comparison tests when significant differences among all groups were found. Variables not showing normal distribution were analyzed by Kruskal-Wallis test, followed by multiple comparisons among groups with the non-parametric Mann-Whitney U test. Receiver operating characteristic curve (ROC) was performed for selecting cutoff value of the improvement of FVC to detect I-FVC subtype. P<0.05 was considered as statistically significant.

For the 1,329 retrospective patients, the mean age was 66.3±8.4 years, 90.5% of patients were men. And 4.7%, 28.1%, 42.4% and 24.8% of patients were classified in GOLD stages 1, 2, 3 and 4, respectively. A total of 403 patients were prospectively enrolled in the present study. They were similar to retrospective patients in sex and GOLD stages distributions, but body mass index (BMI), age, smoking history and some PFT variables differed within these two groups. The patients’ demographics and baseline characteristics were presented in Table 1. 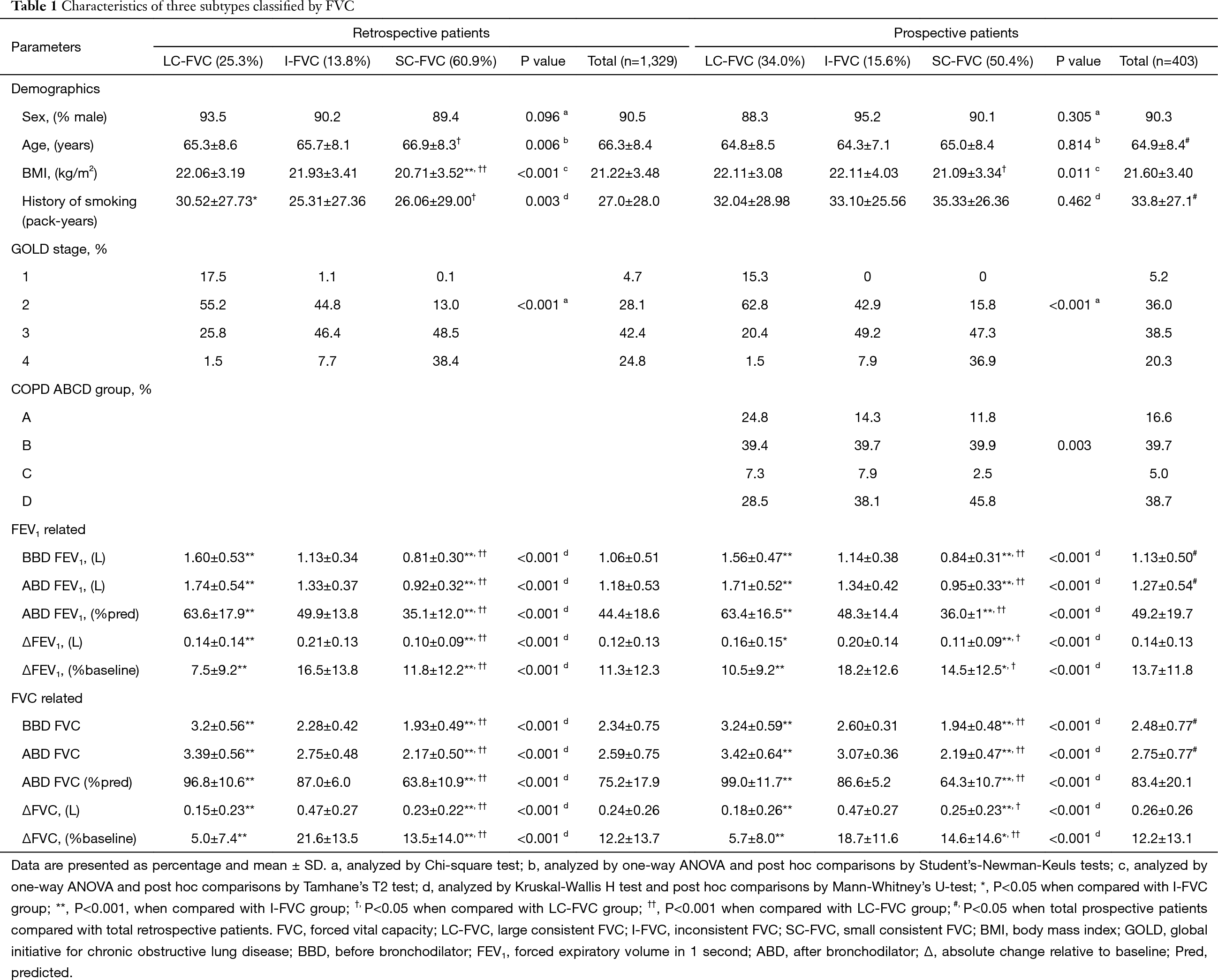 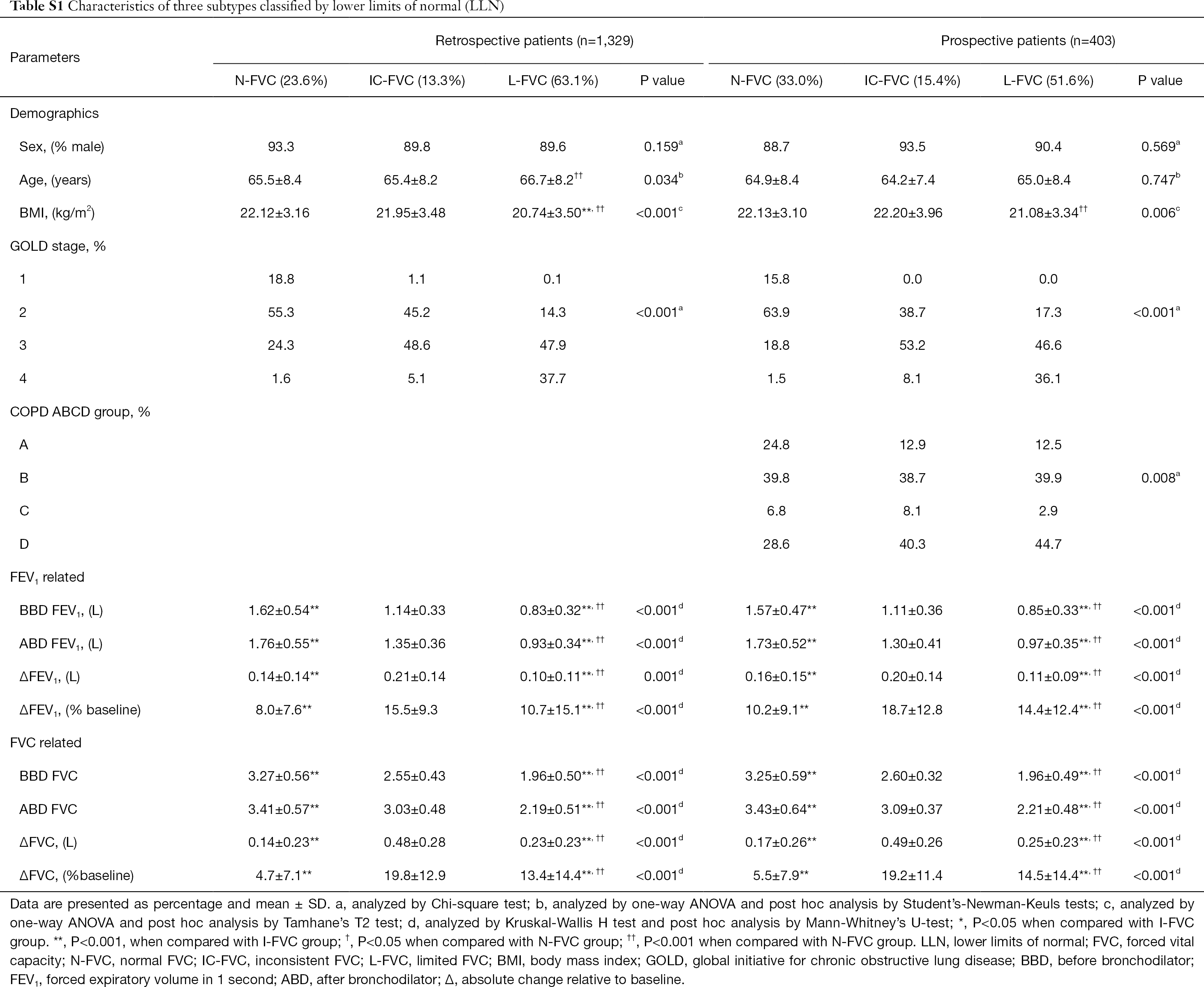 As Table 1, Figure 1 and Table S1 shown, the FVC group distribution and bronchodilator responsiveness for 403 prospective patients were similar to those of retrospective ones. 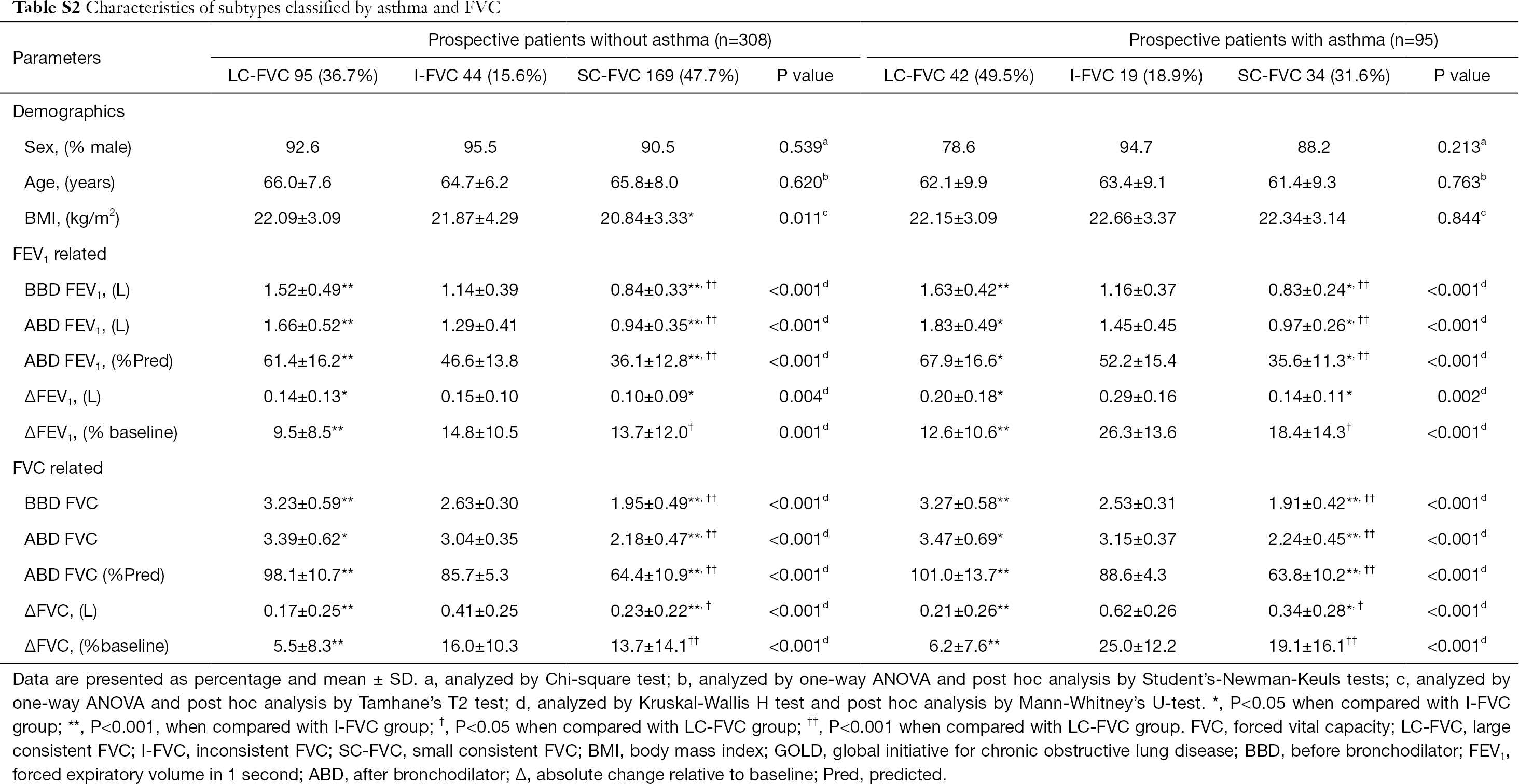 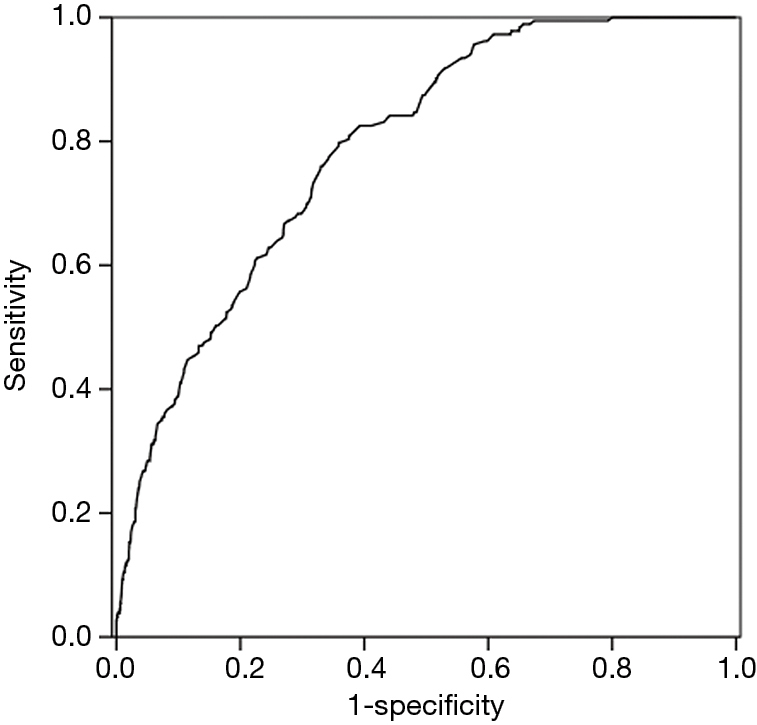 Clinical results of the prospective patients 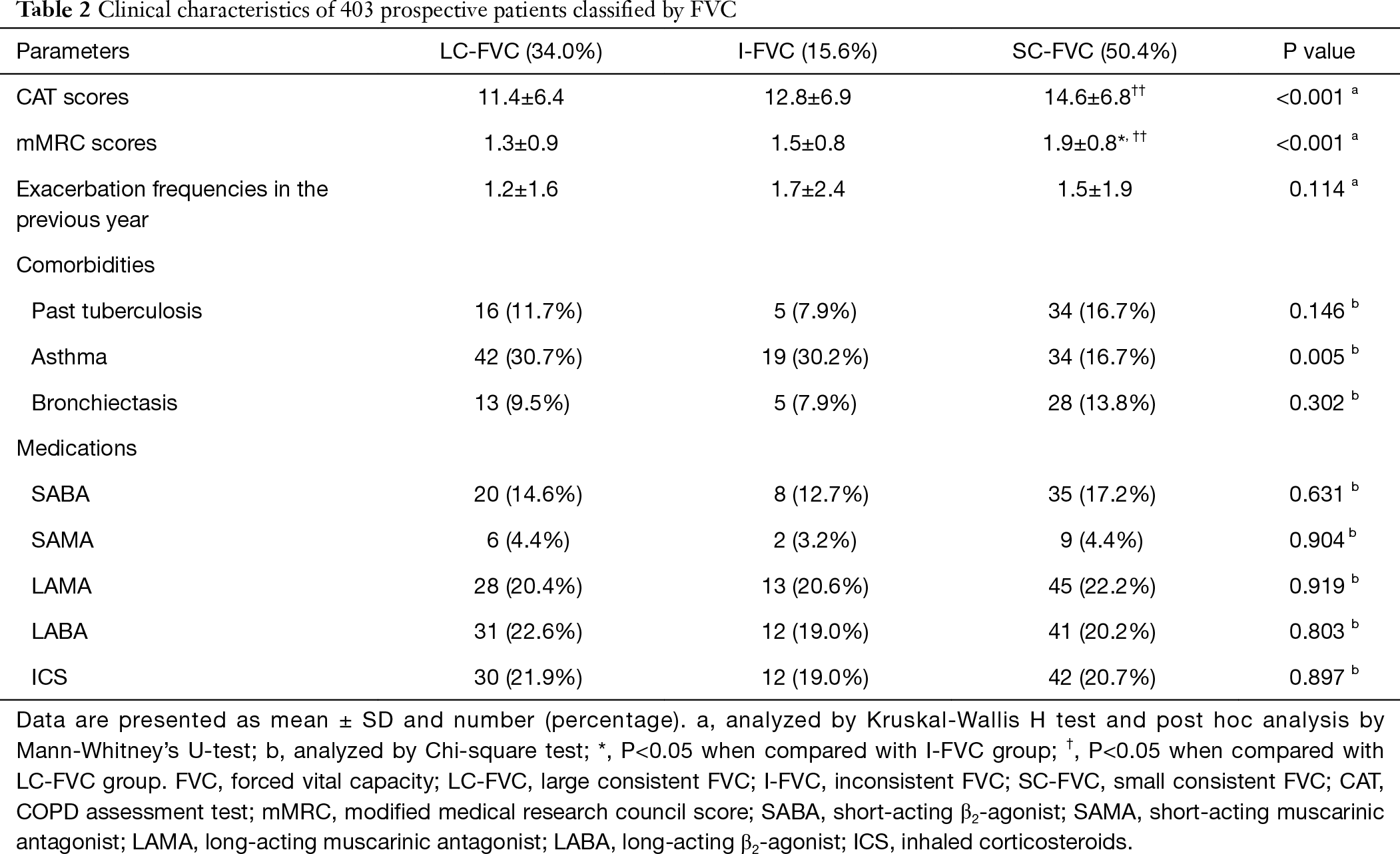 FEV1 is one of the most commonly used parameter for patients with COPD, while in the present study, patients with COPD were classified by a new category method according to BBD and ABD FVC. Patients with I-FVC presented higher RV and higher TLC; and had higher asthma and exacerbation frequencies. Importantly, I-FVC group demonstrated the better responsiveness to bronchodilator evaluated by both FEV1 and FVC among groups.

COPD usually progressively develops and its pulmonary function lost at an abnormal rate with annual decline in FEV1 >40 mL per year (17). In GOLD guideline, patients are graded into GOLD stages 1 to 4 by ABD FEV1 (1). In this study, more than 70% of LC-FVC patients existed in GOLD stages 1 and 2, and a majority of I-FVC patients belonged to GOLD stages 2 and 3, while SC-FVC patients majorly existed in GOLD stages 3 and 4. Therefore, it is logically considered that COPD patients classified by FVC (from LC-FVC to SC-FVC) show the progressive development of COPD, similar to GOLD stages classified by FEV1. Previous studies showed ∆FVC increased across GOLD stages, while ∆FEV1 decreased across GOLD stages during bronchodilation test (6,7). In I-FVC patients, however, the improvements of both FVC and FEV1 were significantly larger than those of LC-FVC and SC-FVC patients. The tendency of bronchodilator responsiveness in FVC classification was different from that in FEV1 one.

80%pred is a fixed threshold value ever been used to define normal FVC, and still been used in some countries including China. Considering 80% is convenient for clinical practice, it has been used to classify FVC groups in this study. Besides, in 2012, Global Lung Function Initiative (19) recommended multi-ethnic reference values for whole age (3–95 years) and provided LLNs to define normal pulmonary function. In the present study, FVC groups classified by LLN from Chinese population presented a similar bronchodilator responsiveness to groups classified by the fixed 80%pred. Therefore, FVC classification method can be widely used to identify patients who experience inconsistent FVC judged by either fixed 80%pred or LLN. A previous study found that many volume parameters did improve significantly better in the FEV1%pred <65 group than in the one with FEV1%pred >65 (20). These evidences indicate that COPD may has a special disease course or “break points”, during which COPD patients response better to bronchodilators.

LC-FVC group were in the early stage of COPD disease with lower RV (2.89 L) and higher TLC (6.06 L), which allows a large baseline FEV1 and FVC. It was reasonable that less respiratory symptoms were seen in these patients. But it could not be ignored that many comorbidities existed in these patients, particularly asthma. Therefore, simultaneous managements of COPD and comorbidities were essential for these patients (21,22).

I-FVC group showed higher RV (3.43 L) than LC-FVC group and higher TLC (5.92 L) than SC-FVC group. The proportionate high TLC and high RV allow a relative moderate slow vital capacity (VC) (= TLC − RV) and symptoms (10,23,24). Patients of I-FVC group were associated with a high prevalence of asthma and more frequent exacerbation events, which strongly suggested aggressive treatments were needed for these patients. Fortunately, patients of I-FVC with asthma or free from asthma both presented the best responsiveness to bronchodilators. Bronchodilators may improve FEV1 and VC and, therefore, lead to the decrease of RV, which tends to reduce hyperinflation at rest and during exercise and further improve exercise performance (23,25,26) and reduce symptoms. Notably, for those patients who have asthma simultaneously, treatments with bronchodilator combined inhaled corticosteroid are needed (1).

SC-FVC majorly existed in GOLD stages 3 and 4. SC-FVC group showed higher RV (3.15 L) than LC-FVC group but relative lower TLC (5.18 L) than the other groups, which leaded to a low VC and poor exercise tolerance. In this study, the high prevalence of past tuberculosis and bronchiectasis were seen in SC-FVC group, which might damage the lung parenchyma and/or airways. COPD patients with past tuberculosis is associated with decreased lung function and plays a role in the natural course of COPD (27). Additionally, the disease procession of COPD results in the narrowing of peripheral airways, loss of small airways and destruction of parenchyma, which contribute to decreased driving pressure for expiration and lead to airflow limitation and hyperinflation (23,28,29). The FVC is disproportionately reduced compared with TLC, leading to the pathophysiological condition of lung hyperinflation. SC-FVC patients may need to overcome resistance before negative pressure can be created in the central airways to generate inspiratory flow, while which is contradictory with weakened respiratory muscles (BMI was significantly lowest in SC-FVC group). SC-FVC patients are apt to dynamic lung hyperinflation, which relates to dyspnea. Because of poor bronchodilator responsiveness, these patients require other treatments (like pulmonary rehabilitation) besides bronchodilators.

The present study had some limitations. First, more than 90% of the patients were male in this study. The main reasons are listed as following: (I) males have a higher COPD prevalence (11.9%; 95% CI, 10.2–13.8) than do females (5.4%; 95% CI, 4.6–6.2; P<0.0001) (30); (II) smoking is the most popular risk factor for COPD in China, more than 70% male had smoking history while 7% female did (30). Biomass exposure is the major risk factor for female COPD, who lived in rural area and had little awareness to hospital for disease detection and treatment. Second, among the 1,329 patients included in this study, only 405 patients finished PFT by either plethysmograph method (n=88) or multiple-breath N2 washout method (n=317). This imbalance derived from the fact that more multiple-breath N2 washout equipment were used in our PFT laboratory. But data from the two methods did not influence the interpretation of the results in this study. Third, some population characteristics differed within retrospective patients and prospective patients, even patients were randomly enrolled from outpatients. Besides some differences, findings in the two population cohorts were consistent, which indicated the characteristics of patients classified by FVC were constant. Fourth, this was a cross-sectional observational study, therefore the stability of FVC subtype, the treatment efficiency and exacerbation risks of different FVC groups remained unknown. Further prospective studies are needed to validate the clinical meaning of COPD subtypes classified by FVC.

In summary, this study putted forward new PFT subtypes of COPD according to BBD and ABD FVC, which showed obviously different lung volume conditions and responsiveness to bronchodilators. Classification of COPD into different FVC subtypes could assist in distinguishing I-FVC patients who may benefit better from bronchodilators.