Lung cancer is a major cause of cancer death worldwide and non-small cell lung cancer (NSCLC) accounts for approximately 85% of all cases (1,2). Prognostic factors for NSCLC patients are important for clinicians to determine the postoperative follow-up and to choose patients who should receive the adjuvant chemotherapy. Previous studies have shown the prognostic factors to be derived from not only tumor-associated factors but also host-related conditions such as performance status (PS) and change in weight (3,4). Among the host-related factors, skeletal muscle area (SMA) and nutritional status have recently been reported to be significantly associated with postoperative outcomes in patients with various types of malignancies, including NSCLC (5-12).

With regard to nutritional status, controlling nutritional status (CONUT) has been reported to be a significant prognostic factor in patients with NSCLC (11,13,14). The CONUT consists of three clinical factors: the serum albumin, cholesterol levels, and lymphocyte count (Table 1). Although CONUT would clearly provide an important prognostic information, there remains a question whether we can really equate the serum nutritional status to a physiologic condition. In addition, our previous study has shown that prognostic nutritional index (PNI) (10), which is calculated by serum albumin and lymphocyte count, was not correlated with SMA (R2=0.037; unpublished data). Therefore, we hypothesized that combination of nutritional status and skeletal muscle index would be more useful in predicting postoperative prognosis than nutritional index alone. In this study, we used serum creatine kinase (CK) as a surrogate of SMA, and defined a novel prognostic factor, CONUT/CK score (CNKS), by combining CONUT score with CK score (Table 1). The aim of this study was to elucidate the clinical significance of CNKS and compared the prognostic impact of CNKS with that of CONUT score alone.

From January 2005 to December 2010, 358 patients underwent complete lung resection and were diagnosed as having primary NSCLC at the Department of Surgery II, Kyushu University Hospital (Fukuoka, Japan). From that cohort, patients who had undergone CT examinations in our institution within 1 month preoperatively were enrolled in this study (n=204). In the selection, patients whose CT scans had been performed in other hospitals were excluded. Of these patients, those whose results of preoperative blood examination within 1 month were available were included. Thus, the present study investigated the data for 189 patients, using the paravertebral muscle area at the level of the 12th thoracic vertebrae (Th12) being measured for this purpose. Pathological staging (pStage) was determined according to the seventh edition of the TNM Classification of Malignant Tumors. Serum CK and indicators of nutritional status, including albumin and cholesterol, were measured preoperatively. In addition, sex, age, smoking history (pack year index: PY), histopathologic findings, PS, adjuvant therapy, and surgical procedure were analyzed. The institutional review board of Kyushu University (Fukuoka, Japan) approved this study (IRB No. 29-259).

The CK score was defined as 0 if the concentration is within normal range, and 2 in case it is under lower limit determined by the institution. Then, the CNKS was calculated by summing CONUT score and CK score as shown in Table 1. The CONUT was assessed as previously described (Table 1) (12,13). The receiver operating characteristic (ROC) curve for 5-year survival revealed that the optimal cut-off value of CNKS was 4 with 60.5% sensitivity and 59.5% specificity [area under curve (AUC) =0.637; Figure S1A]. The ROC curve showed that the best cut-off CONUT was 2 with 90.5% sensitivity and 23.8% specificity (AUC =0.598; Figure S1B). The cut-off CONUT score of 2 was also used in previous reports (13).

Imaging and assessment of SMA

Associations between CNKS and clinicopathological factors were analyzed using Student’s t-test, the Mann–Whitney U test, and Pearson’s χ2 test as appropriate. Survival probabilities were estimated by using the Kaplan-Meier method. Differences in the survival probabilities were analyzed by the log-rank test. Univariate and multivariate analyses were performed with the log-rank test and a proportional hazards model. Differences were considered to be statistically significant when the P value was less than 0.05. All analyses were performed with JMP® 13.0 (SAS Institute, Cary, NC, USA).

The clinicopathological factors associated with a high CNKS

All the patients were classified into the low CNKS group or high CNKS group using a cut-off CNKS value of 4. Twenty-one of the 189 (11.1%) patients were classified into the high CNKS group (≥4). A high CNKS was significantly related to men, smoker, and higher PY (P=0.006, P=0.015, and P<0.001, respectively). The data are summarized in Table 3. The relationships between CNKS ≥4 and men, smoker, and higher PY are shown in Figure 2, respectively. 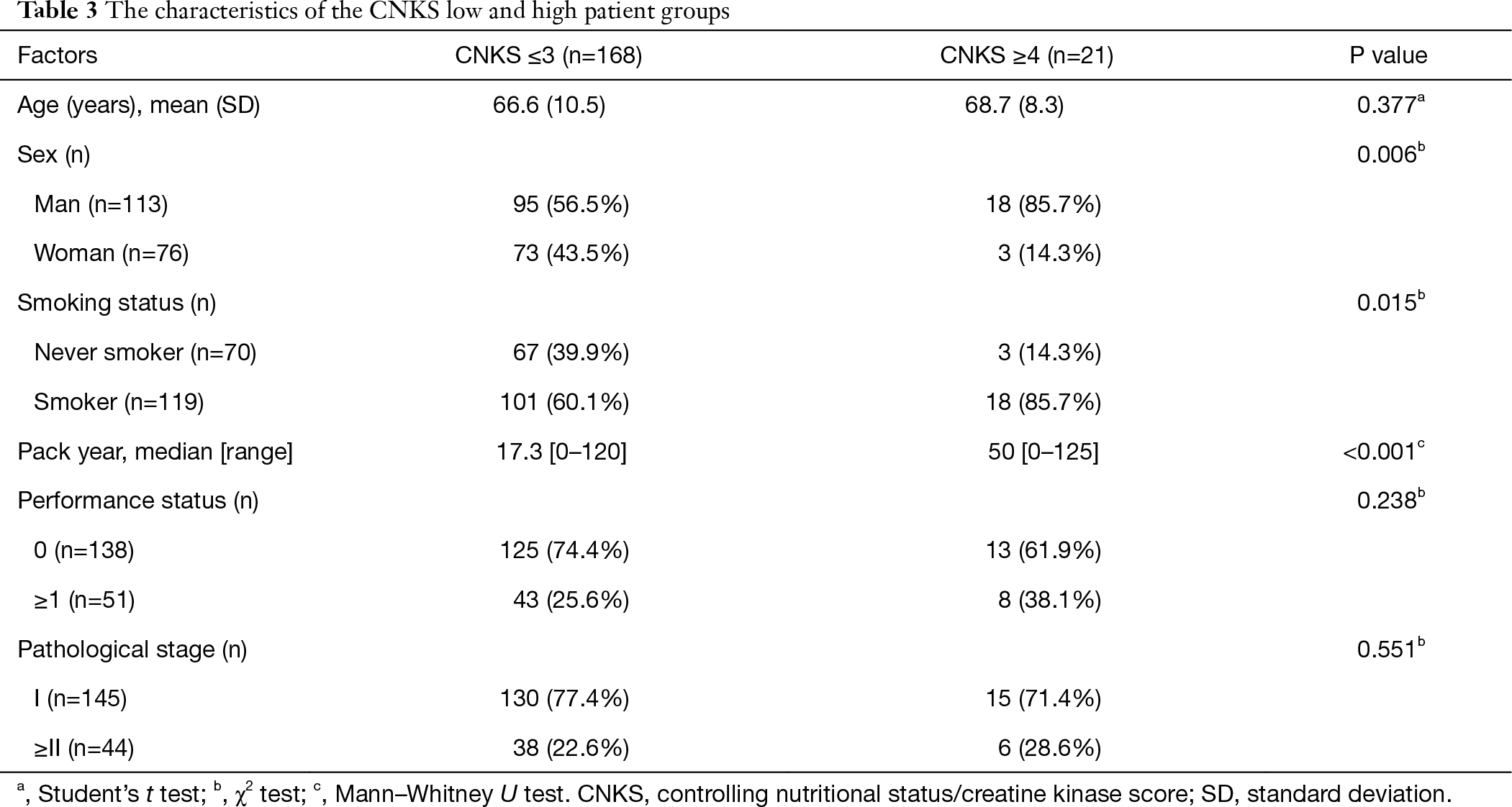 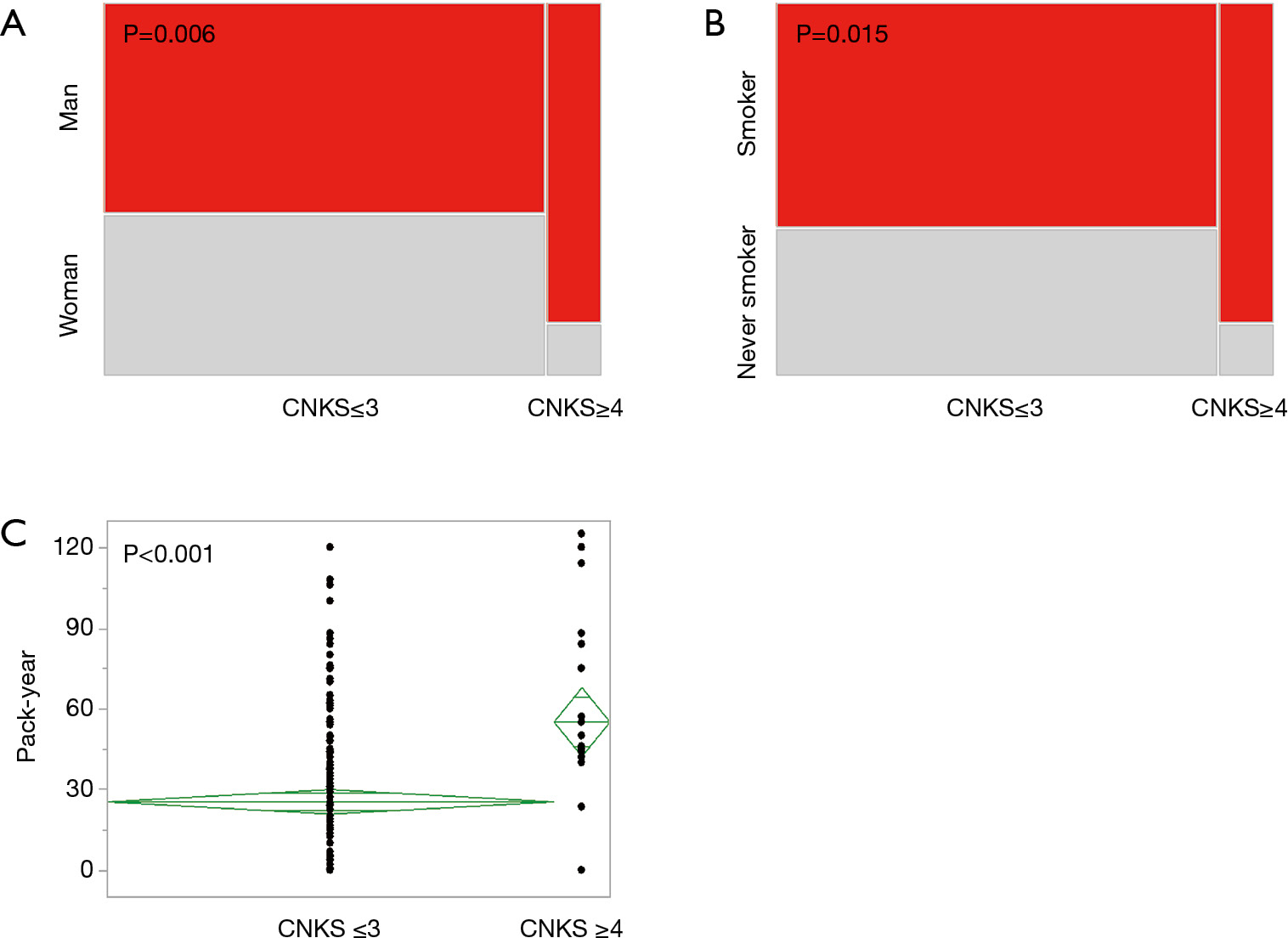 Figure 2 The relationships between controlling nutritional status/creatine kinase score and (A) men, (B) smoker, and (C) higher pack-year are shown using graphs.

The impact of the CNKS on postoperative recurrence

The high CNKS group had significantly shorter DFS (P<0.001). The Kaplan-Meier curve is shown in Figure 2A. As shown in Figure 3A,B, the difference in DFS was greater between high and low CNKS groups than that of CONUT. The univariate analysis to investigate the relationship between DFS and the clinicopathological factors revealed that sex, pStage, CONUT and CNKS were significant prognostic factors of DFS: men and women, P=0.012; ≥II and I, P<0.001; ≥2 and ≤1, P=0.021; ≥4 and ≤3, P=0.002, respectively (Table 4). The multivariate analysis showed that pStage and CNKS were independent predictive factors for DFS: ≥II and I, P<0.001; ≥4 and ≤3, P=0.012, respectively. 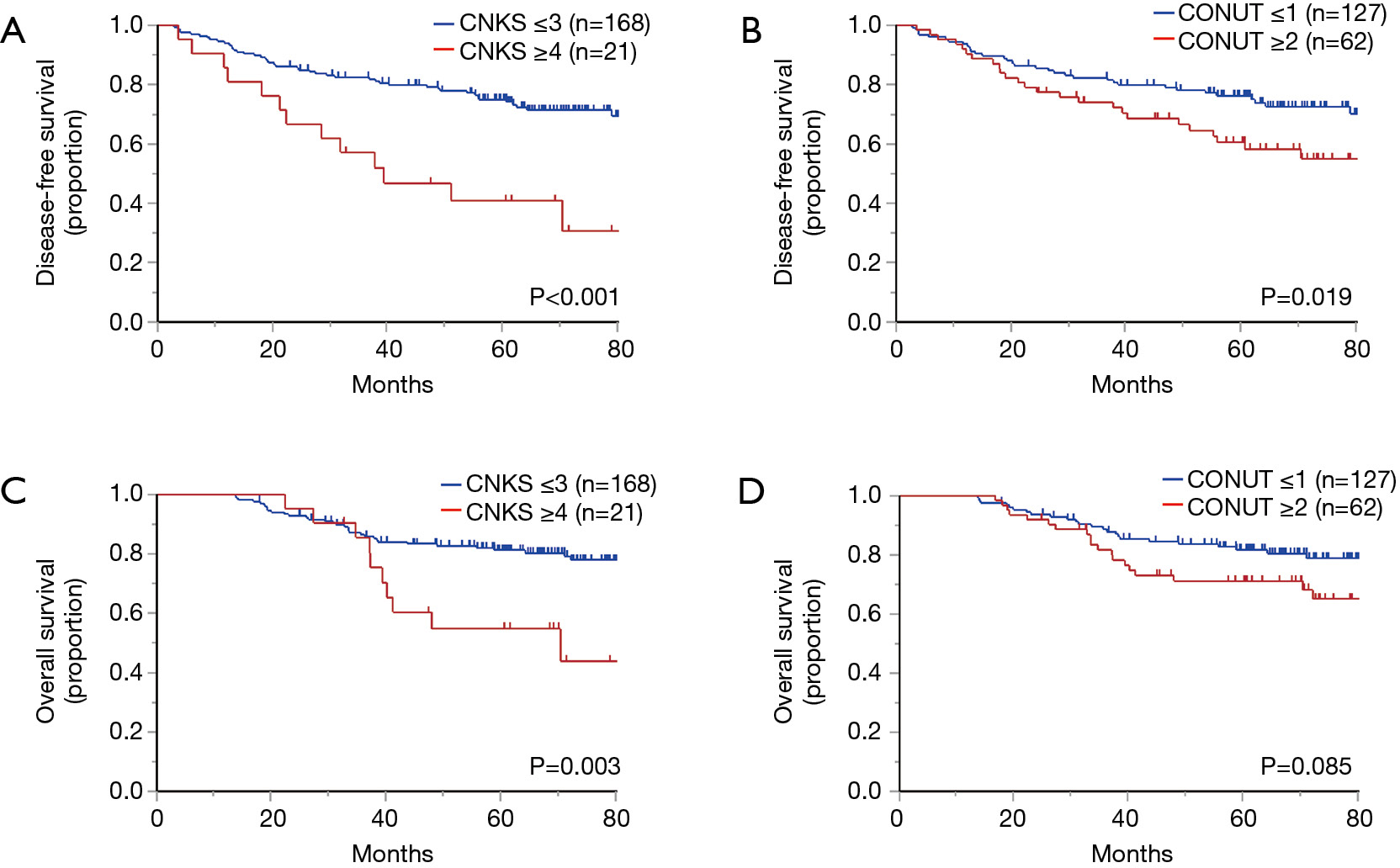 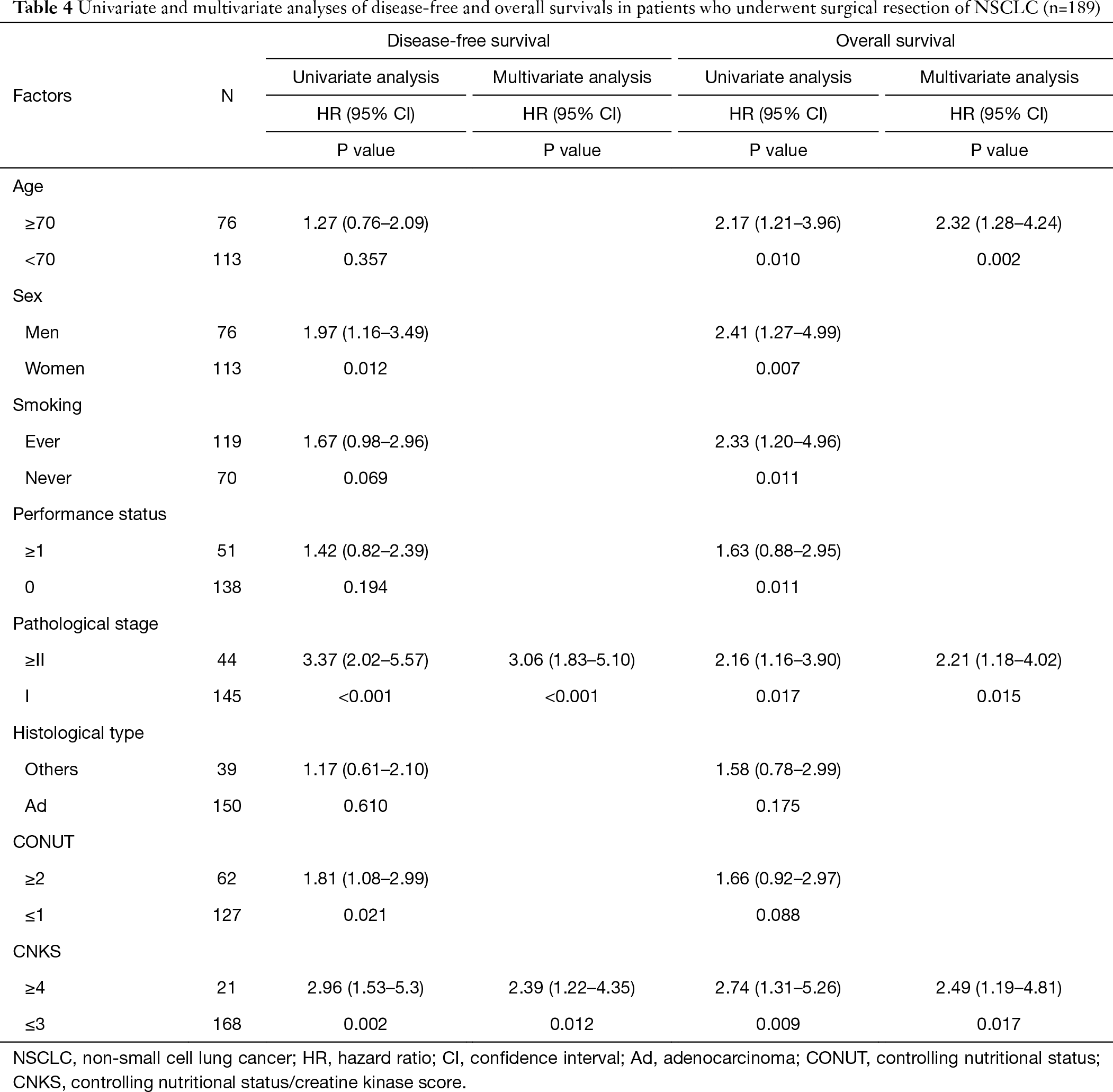 The influence of the CNKS on postoperative survival

Figure S1 The receiver operating characteristic curves of (A) controlling nutritional status (CONUT)/creatine kinase score (CNKS) and (B) CONUT score for 5-year survival are shown. The areas under the curve of CNKS and CONUT score were calculated as 0.637 and 0.598, respectively.

Serum CK is a well-known enzyme widely distributed in the skeletal muscle, heart, and brain (15). The CK enzyme catalyzes the conversion of creatine and utilizes adenosine triphosphate to create phosphocreatine and adenosine diphosphate, which contributes to energy-providing (15). According to a previous report, a reduced physical activity and/or reduced muscle mass could diminish the efflux of CK into serum (16). As shown in Figure 1B, the serum CK level under lower limit was significantly associated with decreased Th12 muscle index, which confirms the results of the previous reports (16). Thus, we think that CK score would at least partly be a surrogate of SMA.

Regarding the association between the CNKS and clinicopathological factors, a high CNKS was significantly related to men, smoker, and higher PY (Table 3). With regard to the relationship between CNKS and smoking history, previous meta-analysis indicated that cigarette smoking was an isolated factor contributing to the skeletal muscle loss (17). In in vitro analysis, it was also suggested that the vapor phase cigarette smoke exposure to skeletal myotubes activates the p38 mitogen-activated protein kinase pathway, leading to skeletal muscle cell damage and the degradation of muscle protein (18). In addition, smoking history was also reported to reduce the nutritional status (19,20). Thus, smoking history may decrease the serum CK level and deteriorate the nutritional status, resulting in the high CNKS. The association between sex and CNKS might also result from the difference in smoking history between men and women. It is notable, however, CNKS was an independent prognostic factor, while the smoking history was not (Table 4). These findings suggest that CNKS may be important for predicting the treatment outcomes in patients with NSCLC.

We subsequently compared the utility of CNKS and CONUT score in predicting the postoperative prognosis. As shown in Figure 3A,B, the difference in DFS was greater between high and low CNKS groups than that of CONUT, and CNKS, but not CONUT, was an independent predictive factor for DFS and OS (Table 4). In addition, the ROC curves for 5-year survival suggested that the CNKS had better diagnostic ability than CONUT score alone (Figure S1A,B). These findings indicate that CNKS was a better prognostic index than CONUT score. The difference may be derived from the discrepancy between serum nutritional index and skeletal muscle formation. In other words, only serum nutritional status does not completely reflect whether the nutrition contributed to the physiological condition. For instance, our previous study has shown that PNI was not correlated with SMA (R2=0.037; unpublished data) (10). Thus, not only serum nutritional status but also skeletal muscle condition may be differently associated with the prognosis in cancer patients. These findings also suggest that future studies should focus on whether the serum nutrition really improves the patients’ physiological status and the prognostic significance of combination of nutritional index and skeletal muscle status.

The present study had some limitations. First, this is a single institutional study with a comparatively small sample size. Our study was also associated with the bias of retrospective nature. We think that further prospective study with a larger sample size is imperative to validate the findings observed in the current study. Second, we used the SMA at the Th12 level for the analysis of skeletal muscle mass. Prado et al. reported that the SMA at the L3 level was appropriate for predicting the prognosis in cancer patients (5). However, our previous study elucidated a correlation between the SMA at the Th12 level and that at the L3 level (R2=0.360, P<0.001; unpublished data). We believe it was reasonable to use the values at the Th12 level to assess the SMA. Third, we defined the CNKS score in our own way, including the balance of CONUT and CK scores. In addition, the cut-off value of CNKS was determined based on the survival data of our study cohort. Thus, it is unknown whether CNKS is the best way of combination of nutritional status and skeletal muscle index. However, it should be emphasized that the combination of nutritional and skeletal muscle indices seemed to be more useful in predicting the outcomes than the nutritional status alone. Future studies may need to focus on the combination indices of nutritional status and skeletal muscle index.

In conclusion, the CNKS was a novel independent prognostic factor in patients with NSCLC. The utility of CNKS seemed to be even stronger than CONUT alone in predicting the postoperative outcomes. Future studies should focus on the combination indices of nutritional index and skeletal muscle status.

Ethical Statement: The institutional review board of Kyushu University (Fukuoka, Japan) approved this study (IRB No. 29-259).