Neuropathic pain after thoracic surgery, known as post-thoracotomy pain, is common and can be severe. This pain is associated with the following general symptoms: burning, shooting, shocking, sensation of pressure and aching (1), and tends to be chronic. Intercostal nerve damage and subsequent dysfunction have long been implicated in the development of chronic pain symptoms. Chronic pain can cause insomnia and loss of appetite and may incapacitate the subject, which makes daily activities impossible (2). Complete video-assisted thoracoscopic surgery (VATS) is minimally invasive and can decrease neuropathic pain compared to thoracotomy. In addition, several mechanisms are available to control chronic pain after thoracic surgery.

Our previous study has reported to clarify risk factors of neuropathic pain after thoracic surgery (3). The results showed that 25.9% of patients developed postoperative neuropathic pain, and 18.8% of these patients reported persistent pain 1 year postoperatively. The median interval from surgery to pain onset was 7 days, and the median duration of pain was 50 days. All patients felt the pain on an anterior extension along the surgical scar, and had significantly longer postoperative hospitalization. The preoperative use of hypnotics, thoracotomy, and a duration of surgery of 2.5 hours or longer were associated with an increased risk of neuropathic pain after thoracic surgery.

This was a 3-month, single center, prospective, randomized, controlled study (UMIN 000007757). The study was approved by the Ethics Committee of the University of Toyama (RIN 23-79); all patients provided written informed consent prior to their inclusion in the study.

This study included all patients aged 20–89 years admitted to Toyama University Hospital (Toyama, Japan) for lung resection between January 2012 and March 2013. The exclusion criteria were as follows: history of pneumonectomy; aged 19 years or younger; aged 90 years or older; estimated glomerular filtration rate (eGFR) <30 mL/min (5); past or current neuropathic pain; severe medical conditions such as uncontrolled cardiovascular, pulmonary, renal, gastrointestinal, hepatic disease; women who were pregnancy or nursing, or who may be or may become pregnant; median sternotomy; psychiatric disorders that made it difficult for the patient to participate; and any patient with inappropriate participation.

All patients received epidural analgesia and oral drugs. In both groups, patients received loxoprofen 180 mg/day from the first postoperative day (POD). In patients with an eGFR of <50 mL/min, 1,200 mg/day acetaminophen was prescribed. In the pregabalin group, patients also received 25 mg pregabalin twice daily from the second POD for 3 months. In both groups, the medication was continued until pain-free status was achieved.

Thoracic epidural catheterization was usually performed prior to induction at the T4–5, T5–6, or T6–7 intervertebral space using a loss-of-resistance technique. Catheter placement was confirmed with a test dose of 4 mL of 1% lidocaine. The epidural infusion was initiated before surgery in the operating room. The drug combination was administered as continuous infusions of 2.0 mg/mL of ropivacaine and 2.5 µg/mL of fentanyl. The infusion rate was adjusted to 2–4 mL/h. Epidural analgesia was discontinued the next day, after chest tube removal.

Neuropathic pain is defined as “pain caused by a lesion or disease of the somatosensory system” (6). We used validated neuropathic pain screening tools such as the Leeds Assessment of Neuropathic Symptoms and Signs and the related self-completed version to ensure consistency and reduce missing data between assessments during the acute and follow-up periods (7,8). Chronic pain was defined as pain that continued for more than 3 months after surgery.

General anesthesia was performed using a single-lung ventilation technique with a double-lumen endotracheal tube. Patients were placed in a lateral decubitus position. The most common surgical approach used in this study was complete VATS. In patients that required partial lung resection including bullectomy, we performed surgery using 3-port VATS with two 5-mm ports and one 10-mm port. For lobectomy and segmentectomy, we added an additional 5-mm port and used a subxiphoid incision for delivery of the resected lung lobe or segment (9). Patients with locally advanced carcinoma or who required a complex segmentectomy typically underwent VATS with a mini-thoracotomy or an open thoracotomy. Three surgeons and their staffs performed the surgeries; complicated surgeries were performed by the chief surgeon. At the end of the procedure, a 24-Fr chest tube was inserted.

Pain was measured three times per day at rest and during coughing on PODs 1, 2, 3, 4, 5, 6, and 7 by a blinded observer using a visual analogue scale (VAS) (10). A score of 0 denotes no pain; a score of 10 denotes the worst pain imaginable. Patients were also asked questions about pain intensity during daily life activities and the location and characteristics of the pain. If pain was present during the interview, the patient was asked to describe the characteristics of the pain they experienced. We used validated neuropathic pain screening tools including the Leeds Assessment of Neuropathic Symptoms and Signs and the related self-completed version to ensure consistency and reduce missing data between assessments in the acute and follow-up periods (7,8).

A complication was defined as any deviation from normal postoperative course and recorded according to the Clavien-Dindo classification (11,12). Prolonged air leak is defined as air leakage beyond POD 5 after lung surgery.

After discharge, patients were assessed as outpatients at postoperative 2 weeks, 1, 2, and 3 months using the same methods. During each follow-up visit, the outpatients were asked about the duration of the pain and the use of analgesic drugs. Neuropathic pain, the Athens Insomnia Scale (AIS) score (13), respiratory function as measured by spirometry, hospital stay, and side effects were also determined at each visit. Side effects such as dizziness, somnolence, peripheral edema, and stomachache were evaluated from after surgery until the medication was discontinued.

The primary endpoint of the study was the incidence of neuropathic pain after thoracic surgery.

In a previous observational pilot study of a similar population (3), we aimed to detect a neuropathic pain of 35% with 80% power and a 0.05 significance level (two-sided), yielding a need for a minimum of 88 patients (44 in each group). Expecting a dropout rate of 10%, we initially included 100 patients, but as dropouts and exclusions reached about 16% (Figure 1). 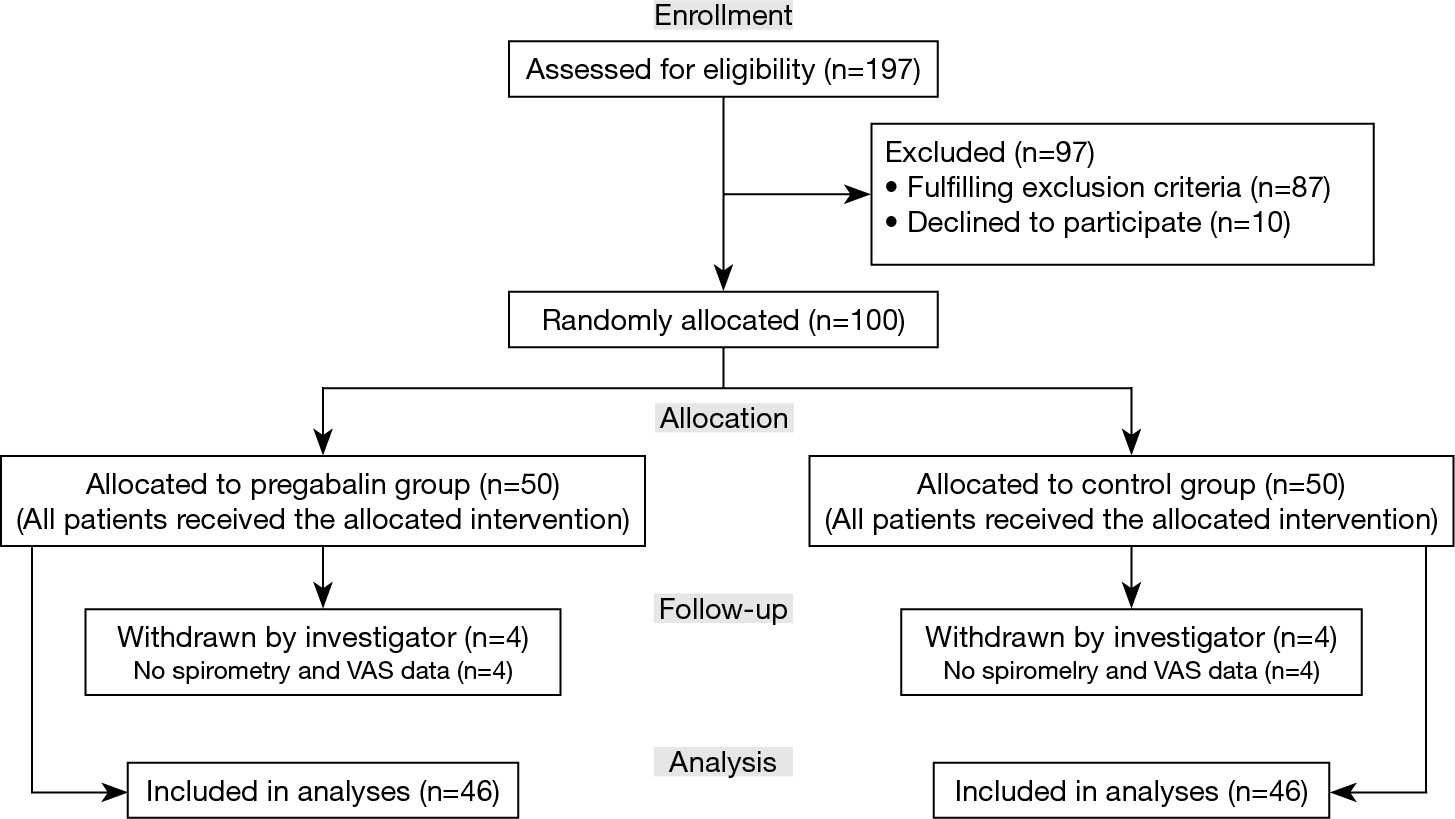 For the univariate analysis, the differences between groups were evaluated using a non-parametric Wilcoxon rank-sum test; the χ2 test or Fisher’s exact test for categorical variables were used when necessary. All statistical analyses were performed using JMP version 12.0 (SAS Institute, Inc., Cary, NC, USA). Significance was defined as P<0.05. All reported P values are two-sided.

The study was conducted between January 2012 and March 2013. A total of 92 patients who consented to participate in the study were randomized to either the pregabalin or the control group (Table 1). No patient experienced any obvious side effects or withdrew from the study. 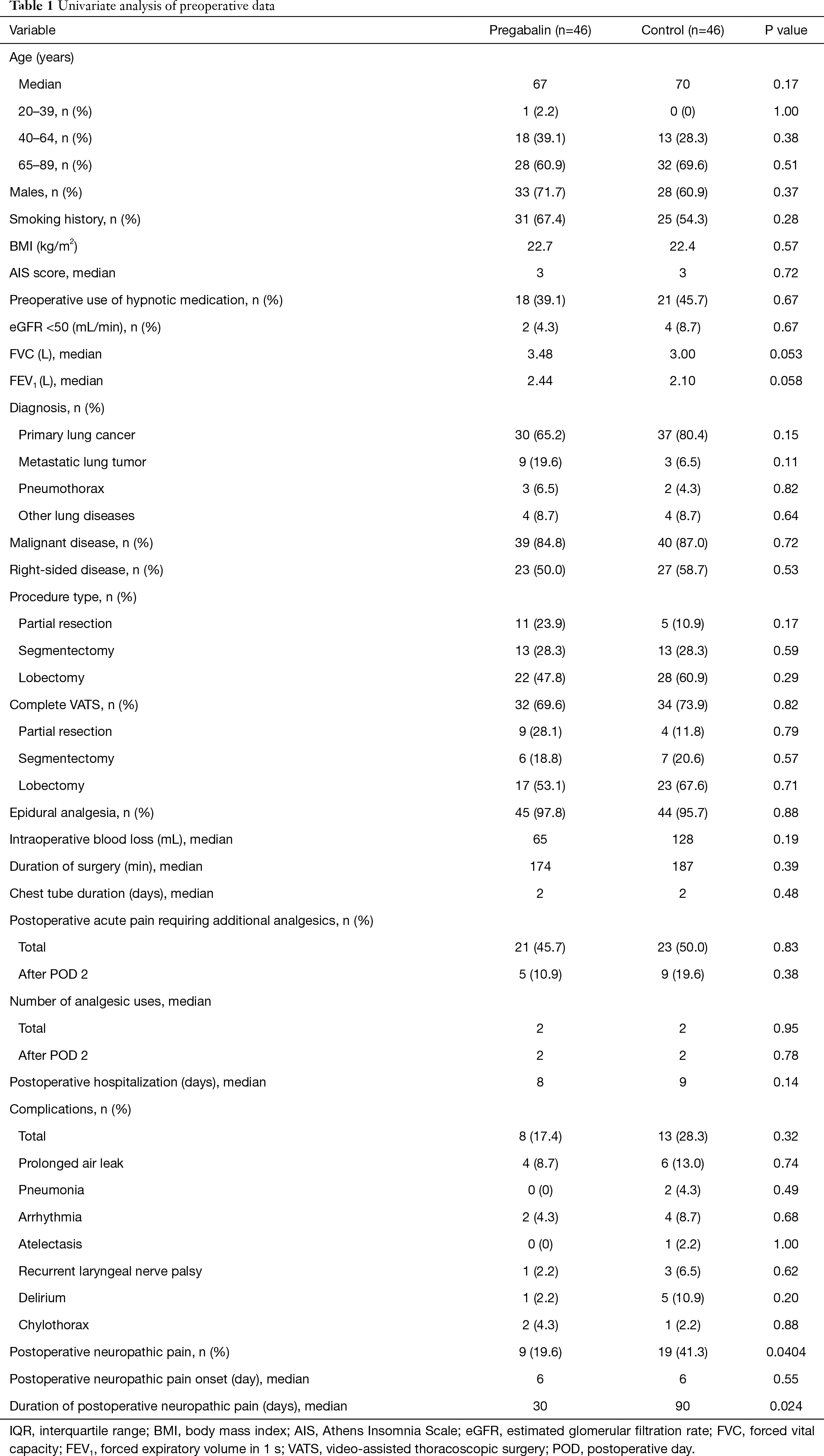 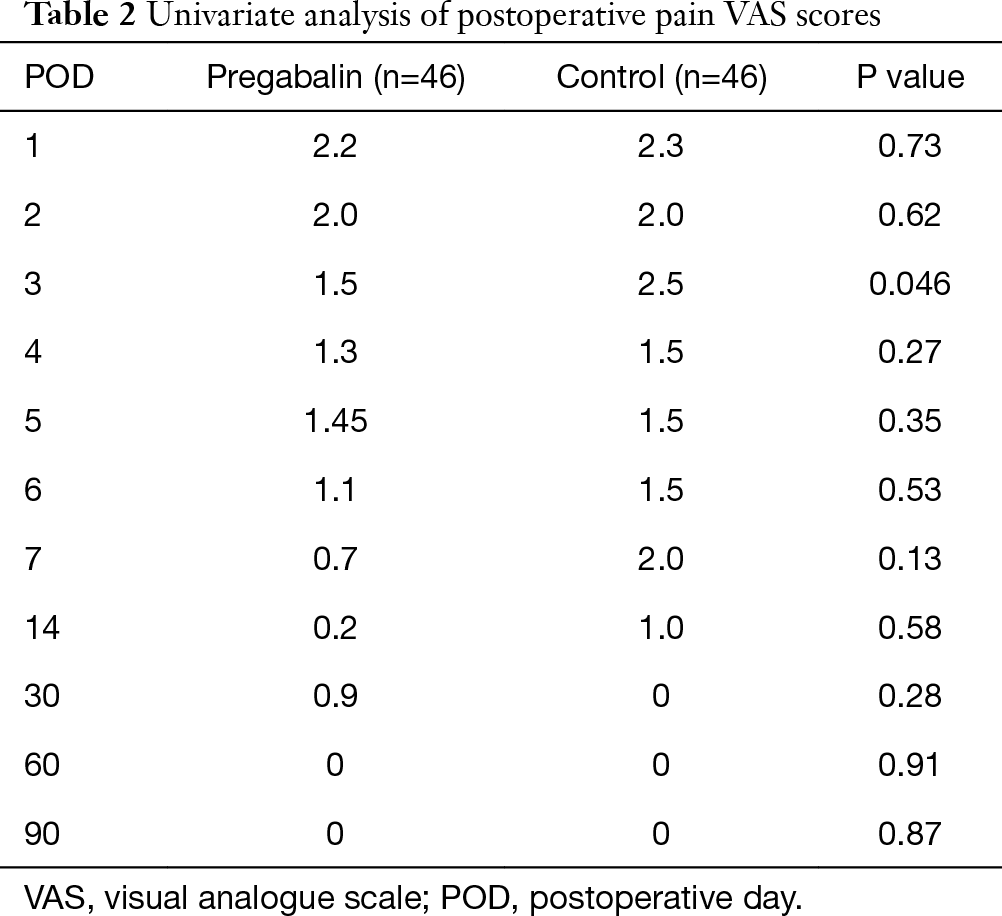 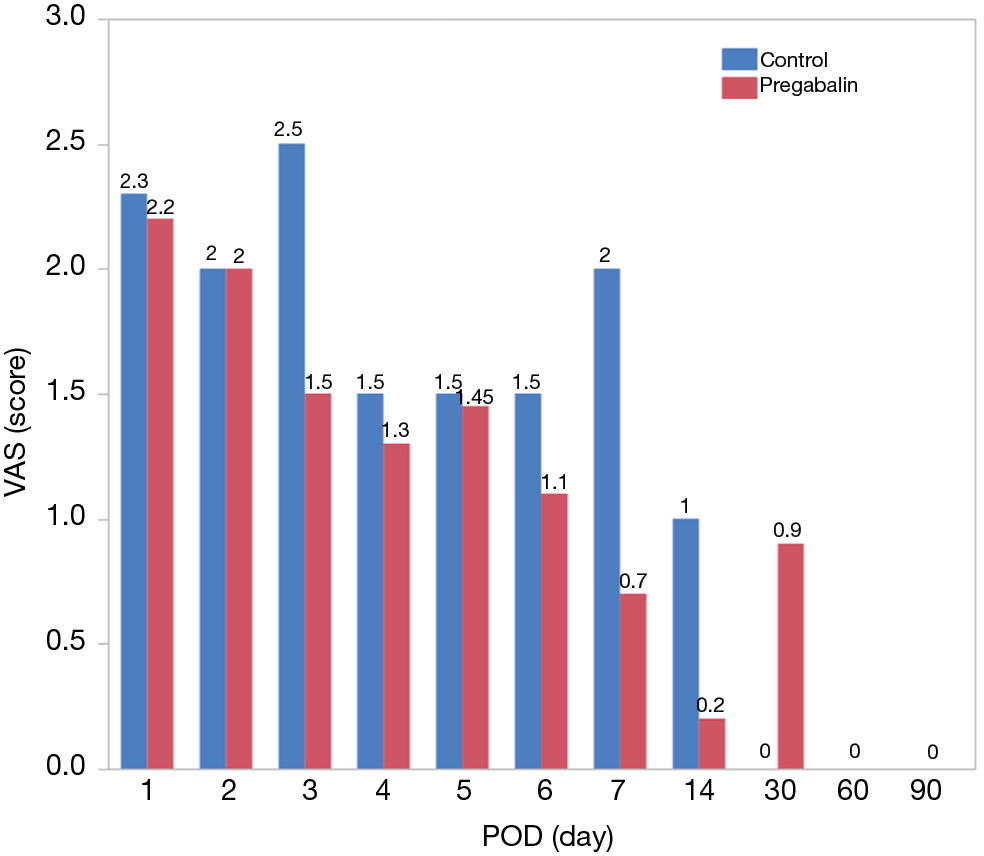 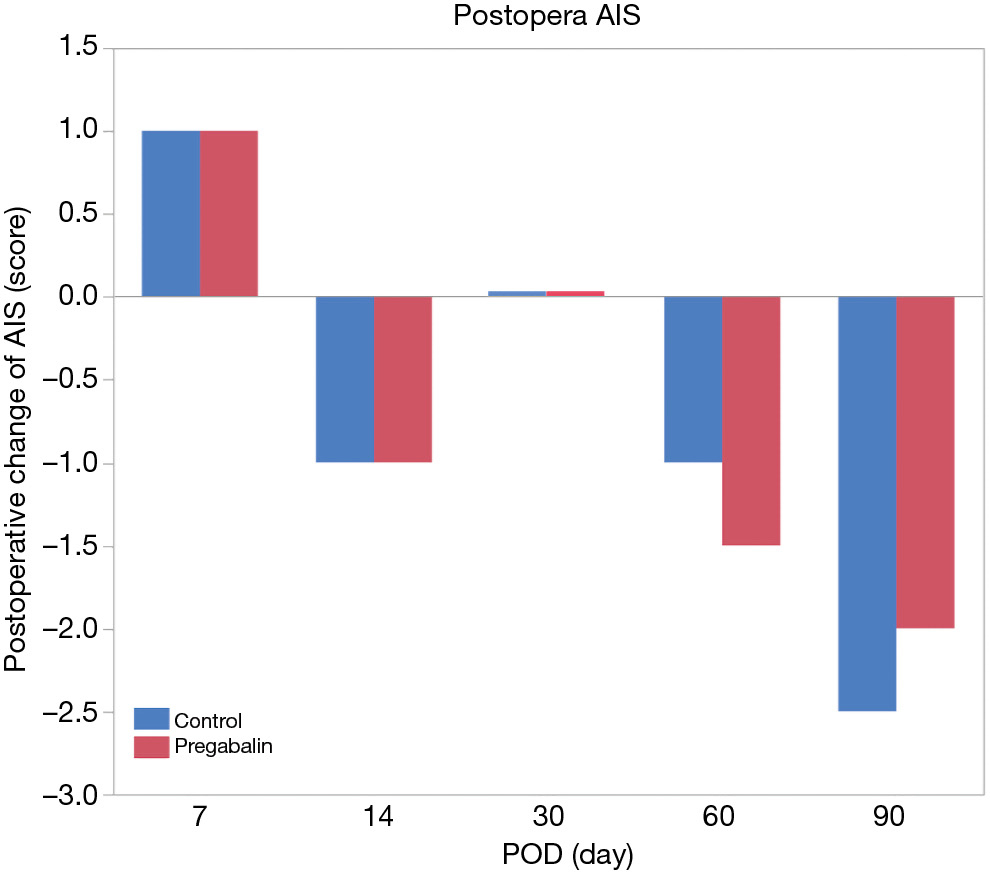 This study included only patients who underwent lung resection. Patients received 25 mg oral pregabalin twice per day from POD 2 until 3 months after lung resection. The results of this prospective, randomized study revealed that 50 mg/day of pregabalin had a significant preventive effect on postoperative neuropathic pain after thoracic surgery.

Various surgical, analgesic, and pharmacologic interventions have been attempted to prevent postoperative chronic neuropathic pain after thoracic surgery (2,14). However, the prevention of neuropathic pain remains difficult. Pregabalin is a gamma-aminobutyric acid analogue with anti-convulsant effects and is widely known as a neuropathic analgesic (15). The efficacy of the perioperative administration of pregabalin has been reported (16,17). Pregabalin is also reported to be effective for pain management after thoracic surgery (18,19).

The most important differences between this study and previous studies were the observed significant preventive effect of even the minimum dose of 50 mg/day after thoracic surgery, and that, as expected, no one who received pregabalin experienced side effects. In general, when elderly Japanese, especially women, take 150 mg/day pregabalin as the starting dose, they tend to experience some side effects, including dizziness, drowsiness, and nausea. Thus, early postoperative administration of the recommended dose of pregabalin was considered risky for postoperative safety management. Therefore, we used a starting dose of 50 mg/day. The physical size of patients could also influence the results, as a higher initial dose might be more effective for larger patients.

We hypothesized that early postoperative administration of pregabalin could not only decrease postoperative neuropathic pain, but may also improve sleep and respiratory function after surgery compared to a control treatment. However, variables other than neuropathic pain were not significantly different between groups. These results might also be due to the use of the minimum dose of pregabalin. A larger dose of pregabalin could result in different AIS scores and spirometry results. Separately, significant differences in FVC and FEV1 between lobectomy and wedge resection, and in FVC between thoracotomy and VATS were recognized, although there were no significant differences between pregabalin group and control group under their conditions. AIS scores decreased at POD 30 in both groups. We might think because postoperative residual symptoms made patients anxious and depressive after discharge (20).

This study had some limitations. First, it was a single-center study. Second, it included a limited number of consecutive cases. Finally, we did not include patients at risk for postoperative neuropathic pain (3). Nevertheless, this study included a short follow-up of partial resection cases. However, this study was a prospective randomized controlled study, and the patients’ backgrounds were not significantly different between groups.

Our analysis demonstrated that administration of 50 mg/day of pregabalin had a significant preventive effect on postoperative neuropathic pain after thoracic surgery, without side effects. The early postoperative administration of pregabalin would help prevent neuropathic pain and provide better pain control after thoracic surgery.

Conflicts of Interest: This study was presented at an international session of the 114th Annual Congress of the Japan Surgical Society by Takahiro Homma.

Ethical Statement: The study was approved by the Ethics Committee of the University of Toyama (RIN 23-79); all patients provided written informed consent prior to their inclusion in the study.