The Authors should be congratulated for their series of lobectomies and anatomical segmentectomies performed via this pioneering technique and for their excellent results. In fact, they reported rapid procedures (median operative time 2 hours), uneventful postoperative recovery time, no mortality, low morbidity, low conversion rate to intubation, with no need to proceed to any open thoracotomy and concluded that non-intubated uniportal VATS (uniVATS) appears to be a feasible and valid option for properly selected cases.

Actually, this topic is not entirely new since its initial description, as—also in the recent literature—other Authors have already championed the same subject (2-12). All these studies share the same clinical bottom line and a common convincing conclusion: the awake tubeless technique can be safely used in selected candidates to VATS lobectomy. Low conversion rates to intubation are reported, and conversion could be safely managed without impacting neither morbidity nor mortality rates nor postoperative complications.

Moreover, in many reports the theoretical benefit of the tubeless surgery are enhanced by the combination with the uniVATS approach repetitively associated per se with shorter hospital stay, less postoperative pain (both short and long term), less hospitalization costs compared with the conventional multiport VATS (13).

Before making any definitive conclusion we should analyze the trajectory of our speciality in the last 30 years.

Even if the global adoption of VATS has been very slow for many reasons—and in some circumstances still it is unsatisfactory—currently it is considered the gold standard for a large proportion of lung cancers surgically treated each year around the world. Whilst in the past decades the challenge for thoracic surgeons has been the adoption of VATS as a replacement for the classic thoracotomy approach, more recently this has shifted to the exploration of increasingly less-invasive attitude in an era of established minimally invasive thoracic surgery.

We have witnessed a continuous escalation of improvements in order to reduce the impact of surgical trauma.

This has included the development of specifically designed long, articulated and curved instruments, the systematic use of ameliorated staplers and bio-energy vessel sealers for a more precise and quicker dissection, the ultra-HD and 4K vision technology, the conception of the Enhanced Recovery After Surgery or Fast-Track (ERAS) pathway (14,15) and eventually the introduction of the uniportal video-assisted thoracoscopic surgery (uniVATS) approach (single incision, single intercostal space) (13).

These advances have also contaminated the anesthesiology and encouraged some of our colleagues to challenge their knowledge of the anesthetic modalities for major thoracic operations at the level of performing pulmonary lobectomies without the employment of general anesthesia, through maintaining spontaneous ventilation and with minimally sedated patients.

One-lung spontaneous ventilation is appealing because is more physiological than mechanical ventilation, however relying only on the spontaneous pneumothorax also includes mediastinal shift and diaphragmatic oscillations, coughing and occasionally movements of the patient during surgery; in general this can make surgical manoeuvres via minimal invasive thoracoscopic surgery technically demanding and risky, especially if this is done through a single port (uniVATS).

The journey of awake non-intubated thoracic surgery has increasingly expanded along years and has involved a broad spectrum of procedures. At the beginning it was considered only for minor procedures like pleural or mediastinal biopsies; considering that intubation and general anesthesia is not feasible in all elderly patients or in those with severe comorbidities, they were regarded as potential candidates given the chance to offer the procedure under local anesthesia, awake and without double-lumen intubation. Eventually, initial indications have gradually expanded to include resections of peripheral nodules (wedge), thymectomies, lung volume reduction surgery and at the present also major anatomical pulmonary resections (16).

Non-intubated VATS under loco-regional anesthesia has gained increasing attention globally; excellent outcomes were not only reported in some case reports, but also in some RCT although the small sample size which lacks robust evidence to elucidate its actual feasibility and definitive safety for thoracic surgery (17,18).

Despite this realistic enthusiasm, tubeless surgery should not be regarded as such an easy topic, both for surgeons and for anesthetists (and we should probably add also for patients?).

Firstly, the anesthesia techniques for non-intubated surgery are not homogeneous neither fully standardized yet, as different groups are using different techniques with equivalent results.

Minor procedures might be accomplished with simple intercostal blocks without sedation and without any degree of airway control; more complicated tasks have to include the usage of a laryngeal mask, a deeper drug sedation (midazolam, fentanyl, remifentanil, propofol), epidural blockade (T3-4 level) or para-vertebral blocks, vagus and phrenic nerves blockade. This has been superbly summarized by Gonzalez-Rivas et al. and is reported in Table 1 (16). 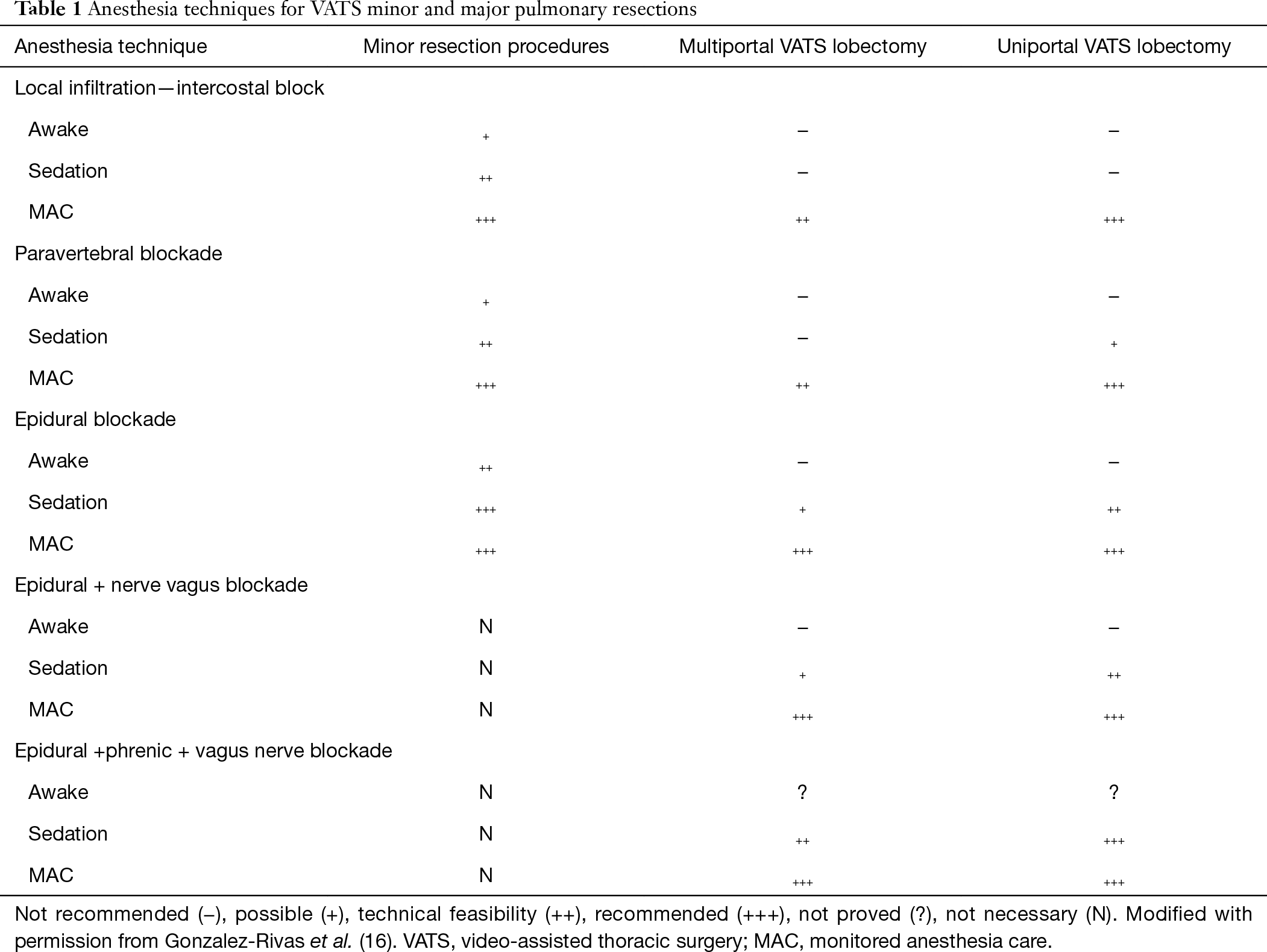 In general, major procedures might still require some degree of airway control and sedation for cough reflex. Most of the Authors are replacing the simple facial mask or nasal cannula with a laryngeal mask as well-tolerated devices to secure ventilation, in combination with loco-regional anesthesia obtained via epidural catheter and paravertebral or intercostals nerve blockade. The suppression of the cough reflex is achieved by local anesthetics infiltration of the vagus under VATS guidance or by nebulization of 5 mL of aerosolized lidocaine 2% 30–40 minutes before the procedure. More recently a smart technique of combined vagus and phrenic nerves blockade under ultrasound control at the level of the neck has been proposed (6,16).

There is no doubt that these techniques are able to avoid many of the risks and discomforts related to (I) intubation, (II) general anesthesia and (III) one-lung ventilation (OLV).

Mechanical ventilation has a series of potential side-effects such as pressure-induced injury, lung overdistension, the release of a variety of pro-inflammatory mediators. Ventilator-related lung injury occurs in about 4% of major lung resections and carries a mortality rate as high as 25%; however, subclinical lung injury might be an underestimated event. The oro-tracheal-bronchial intubation can also have potential local complications, including upper airways pain, mucosal ulceration and laryngeal or tracheal injuries. General anesthesia eventually also has deleterious systemic side-effects that do not occur in regional anesthetic techniques in awake patients or those minimally sedated. The use of muscle relaxants is known to produce diaphragmatic dysfunctions and atelectasis in the dependent lung is frequent during OLV; the intravenous analgesics (especially opioids) are associated with postoperative vomiting, nausea and respiratory depression. These can reduce the patient’s comfort and prolong the hospital stay (19).

But are all these considerations enough to support the concept that the tubeless surgery in combination with uniVATS is the direction for future thoracic surgery? We surely have some evidence to say that this will definitely be a substantial part of the thoracic surgery armamentarium in the future, though some questions still remain unanswered yet.

Clear indications and selection criteria are lacking, and as a matter of fact both selection of candidates and choice of procedures are currently left to local teams on the basis of their institutional case-mix.

A recent survey from ESTS has shown some of the hurdles preventing dissemination of the non-intubated awake surgery (20). What are viewed as difficulties routinely encountered in “traditional” OLV intubated major surgery (VATS or open) should be regarded as an insurmountable barrier in case of awake surgery: obese patients (BMI >30), case with difficult intubation or anticipated complex airway management, COPD cases with abundant airway secretions, patient with neurological disorders or unable to cooperate in the awake setting, extensive pleural adhesions or previous pulmonary resections, elder and fragile cases with severe hypoxia (PaO2 <60 mmHg) or hypercapnia (PaCO2 >50/55 mmHg), previous induction chemo- or chemo-radiotherapy, multi-level calcified lymph nodes, anatomical variations, need to isolate the lung to avoid contralateral lung from spillage and contamination.

Additionally the uniVATS or multiport VATS surgeon, dealing with an awake patient, should be much more than simply “familiar” with minimally invasive techniques; in fact even some minor procedures could become extremely demanding, as uncontrolled cough, wide diaphragmatic excursions, lung and/or patient’s movements, incompletely controlled pain or unsatisfying lung collapse under spontaneous pneumothorax are all perceived hazards hampering the widespread adoption of the technique and making it highly challenging not only for the surgeon but also for the entire theatre staff.

Another unresolved clue is when to convert? Some complications call for an imperative conversion: major bleeding, severe hypoxemia (PaO2 <60%) or hypercapnia (PaCO2 >80) or acidosis (pH <7.1); others are more questionable (slow progression during procedure, excessive mediastinal and diaphragmatic shift, persistent cough creating difficulties and preventing performing surgery, inadequacy of the level of regional analgesia, lung hyperinflation) and relies only on team experience. The obvious recommendation that “continuous and effective communication between surgical and anesthetic teams is paramount” does not clearly dictate which an acceptable cut-off for conversion rate is nor explain when it is the time to not hesitate anymore and convert.

Especially the contest of a major bleeding poses doubts for the safety of the patient: injuries to vascular structures are among the most severe causes of unplanned conversion during VATS, occasionally might be uncontrollable and might evolve into a major pulmonary resection (pneumonectomy) (21). Sometime the situation could turn rapidly catastrophic and—despite a rescue plan adequately predisposed before the incision—the last thing you would like to offer to a patient with an early stage lung cancer, potentially curable with a 90-min “ordinary” VATS lobectomy, is on the contrary the experience of a double-lumen intubation on lateral decubitus on emergency setting.

The management of major bleeding is sometimes complicated in the normal scenario and even for skilled surgeons and anesthetists: are then the risks (bleeding) truly counteracted by the benefits? At the very end of the story, where is the true benefit of this challenging and demanding techniques? What should we expect from tubeless surgery in real life?

One might argue that a large proportion of patients are nevertheless receiving uniVATS and experiencing their benefit in terms of pain, length of hospitalization, reduced morbidity.

Likewise in the era of FAST-TRACK philosophy, some of the principles of the regional anesthetic techniques are also routine part of the modern general anesthesia (with intubation), thus many beneficial effects are not exclusive to non-intubated cases (i.e., fast for only six hours for food and two hours for fluids, short-acting anesthetic drugs, limited invasive monitoring with central venous access and urinary catheterization reserved only for selected cases, focus on immediate postoperative pain control and antiemetic prophylaxis, moderate use of opioids to prevent vomiting and nausea; obsessive attention to paravertebral blocks for an aggressive pain management during and immediately after at the procedure, early mobilization and physiotherapy) (22).

In conclusion, it is not the length of stay more influenced by the need of a chest drain after the procedure or by the adoption of a fast-track strategy than by the intubation under general anesthesia? Is it not the postoperative recovery not more conditioned by the cocktails of anesthetic drugs, by the surgical incisions and by some unavoidable minor morbidities (prolonged air leak, atrial fibrillation) more than by the OLV? In terms of the impact on the postoperative outcome, is there any real difference between the modern VATS surgery (uniVATS + ERAS programme) and the tubeless surgery? If an uncomplicated case of multiport VATS lobectomy under general anesthesia and intubation can be nowadays discharged home on postoperative day 2, can we do far much better with tubeless awake technique? How can we imagine to train junior colleagues?

So far, the awake non-intubated surgery has a sure rationale for minor procedures that can be accomplished even without chest drain on out-patient basis; another area of realistic interest is represented by selected patients otherwise medically inoperable under general anesthesia (fragile, interstitial lung disease with severe respiratory impairment, elderly).

On the contrary, the place for major lung resections with non-intubated patients still need scientific confirmation and should be considered only for a selected minority of masters of surgery and anesthetists.