Acute type A aortic dissection (TAAD) is cardiovascular emergency that is often fatal. American Heart Association guidelines recommend that surgical interventions should be given to TAAD patients to resect all aneurysmal aorta and the proximal extent of the dissection (1). TAAD surgical managements had been increased and improved in recent years. In 2015, international registry of acute aortic dissection (IRAD) reported that in-hospital mortality of surgical treated TAAD patients has decreased over time, but the rate remained high (from 25% to 18% over 17 years, P=0.003) (2). Identifying patients with high-risk feature is clinically relevant. IRAD researchers reported that the principal independent pre-operative predictors of mortality were history of aortic valve replacement, migrating chest pain, hypotension as sign of TAAD, shock or tamponade, preoperative cardiac tamponade, and preoperative limb ischemia (3). Age greater than 70 years, prior cardiac surgery, intraoperative hypotension, a right ventricle dysfunction at surgery, a necessity to perform coronary revascularization, pre-existing cardiac disease, and cardiopulmonary resuscitation were also reported as risk factors for TAAD in-hospital mortality in other studies (4,5).

Since TAAD is an acute condition and often progresses rapidly, it could be hard to gather all the relevant data during hospitalization. Studies were lacking to explore potential prognostic values of biomarkers, traditional disease severity measurement system (e.g., APACHE II score), and intra-operative parameters. In the current study, we aim to examine the prognostic implications of such parameters to identify high-risk patient for in-hospital mortality.

This is a retrospective analysis of consecutive TAAD patients in Guangdong General Hospital from March 2012 to April 2016. All patient data were collected by chart review. Patients who died before and during surgery were excluded (n=4), and a total of 264 patients were analyzed. This retrospective study did not require ethics approval. 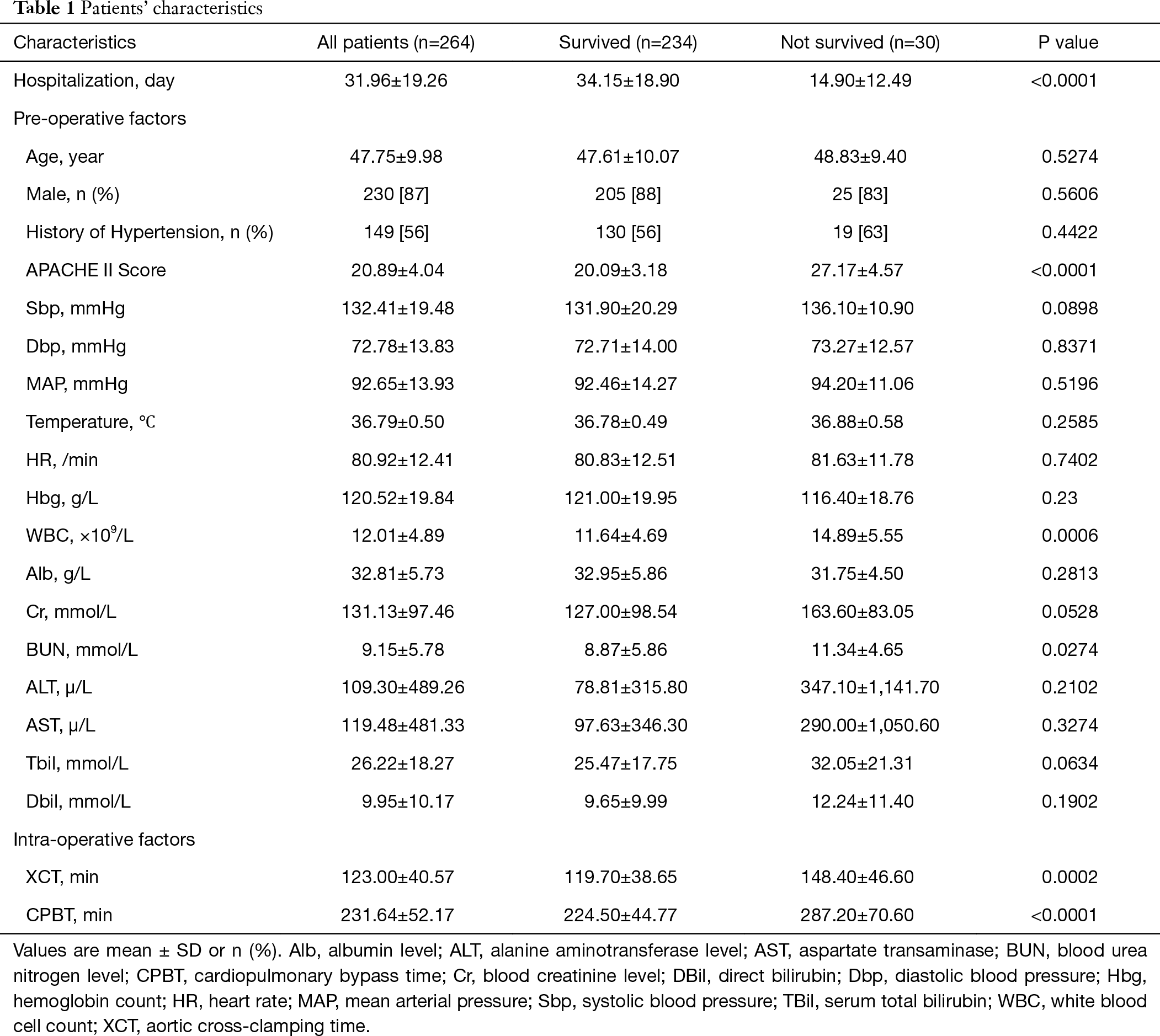 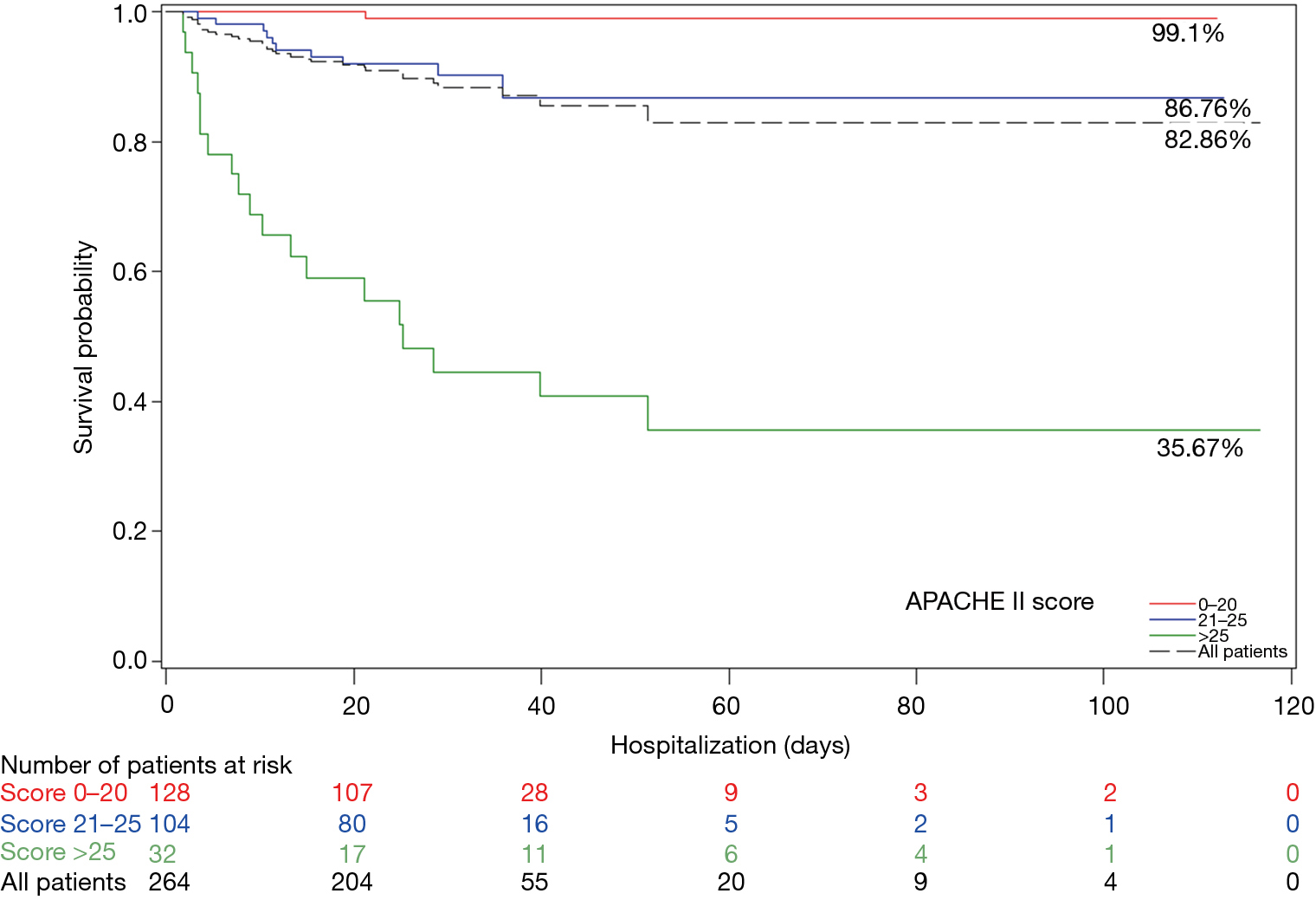 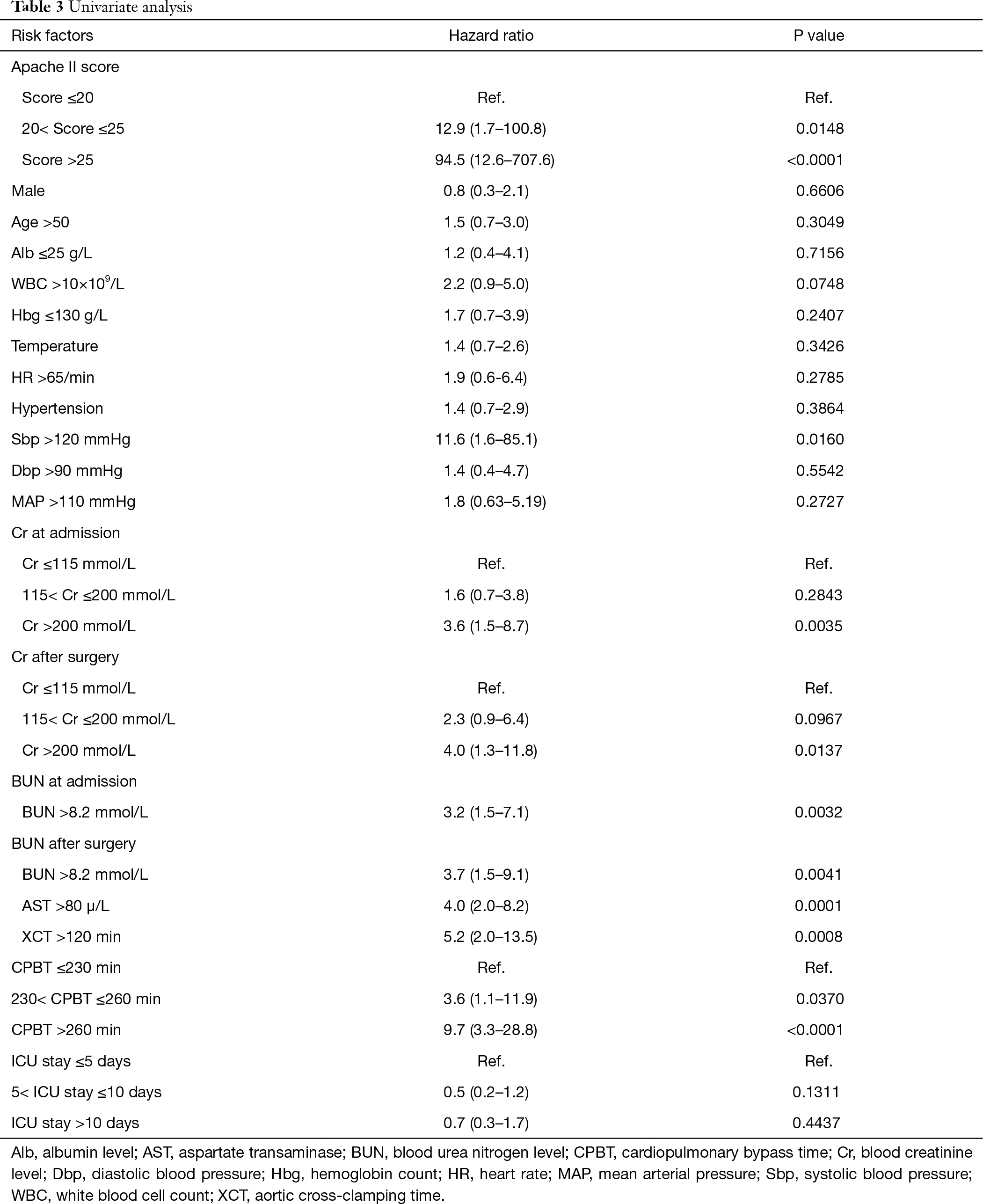 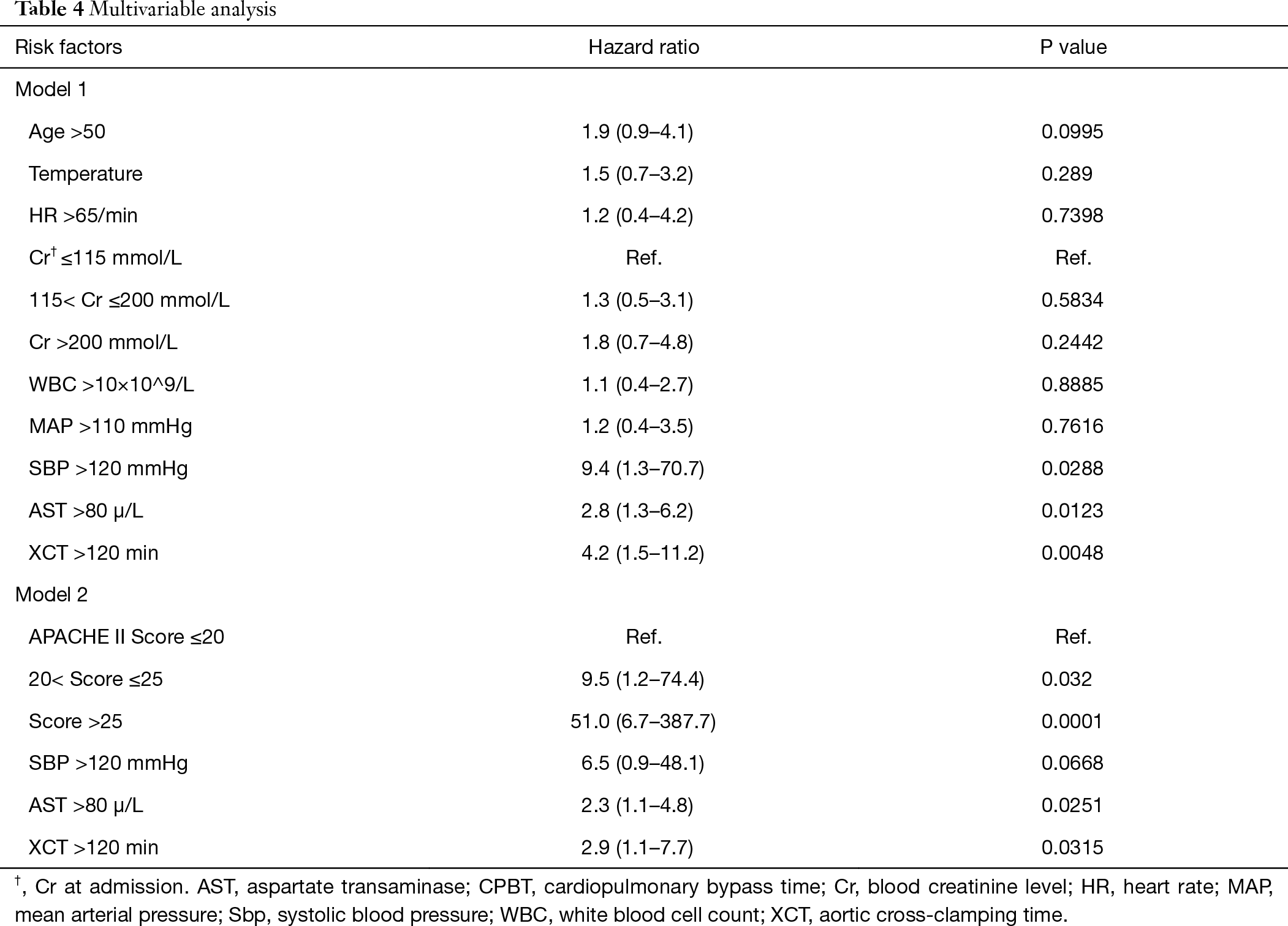 TAAD is a cardiovascular emergency that requires prompt surgical intervention. Despite advances in surgical technique, the disease is still fatal, with in-hospital mortality reported between 10.6% to 26.6% (3,5-10). Identifying high risk patients is thus clinically relevant as clinical trials may target those patients for innovation in surgical techniques and peri-operative management.

In the current study, we analyzed the outcome of 264 TAAD patients who received surgical treatment in Guangdong General Hospital. The in-hospital mortality was 11.4%. This was consistent with study by Masuda and colleagues (10.6% in 2014) (6), and was lower than those from other investigators (3,5,7-10). This may reflect continuous improvement in surgical technique and peri-operative management. However, race and referral-based facility may also explain the relatively low mortality. We found that APACHE II score could be a useful tool to predict in-hospital mortality. AST >80 µ/L and XCT >120 min were also independent predictors.

APACHE II score is a severity of disease classification system based on 12 physiologic measurements, age and previous health status (11). It is a well validated score system that is widely used in ICU setting. Due to its limitation, it may not be appropriate for all disease types. Giamarellos-Bourboulis et al. discussed that if comparing patients at a wide range of age with various baseline condition (e.g., septic patients), APACHE II score may not be sufficient to estimate death risk (12). There was no previous study investigating whether APACHE II score is suitable for predicting TAAD mortality. In current study, the mortality rate increased significantly as the score increased. In our cohort, most patients were healthy non-elderly adults with few comorbidities. APACHE II score provided a good prediction for TAAD in-hospital mortality. We also calculated the area under the receiver operating characteristics curve (AUROC) for APACHE II score (Figure S1). The AUROC was 0.9172 (P<0.0001), which also proved that APACHE II score is an excellent model to predict TAAD in-hospital death. APACHE II score could quantify severity and help physicians to have a general idea about patients’ situation at admission. The score system may also be used in future TAAD studies to identify high risk patients. We originally planned to decompose the score system to analyze each variable, but we were only able to collect age, temperature, heart rate, Cr level, WBC counts and MAP data. We analyzed the available variables and found that only Cr level greater than 200 µmol/L was related to TAAD in-hospital mortality in univariate analysis, but all of them were not significant in adjusted model. This might indicate that the other variables in the score system (AaDO2 or PaO2, pH arterial, respiratory rate, serum sodium, serum potassium, Glasgow coma scale) could have a greater weight in predicting TAAD in-hospital mortality. The prognostic implication of APACHE II score in TAAD patient will need to be further confirmed in future studies. 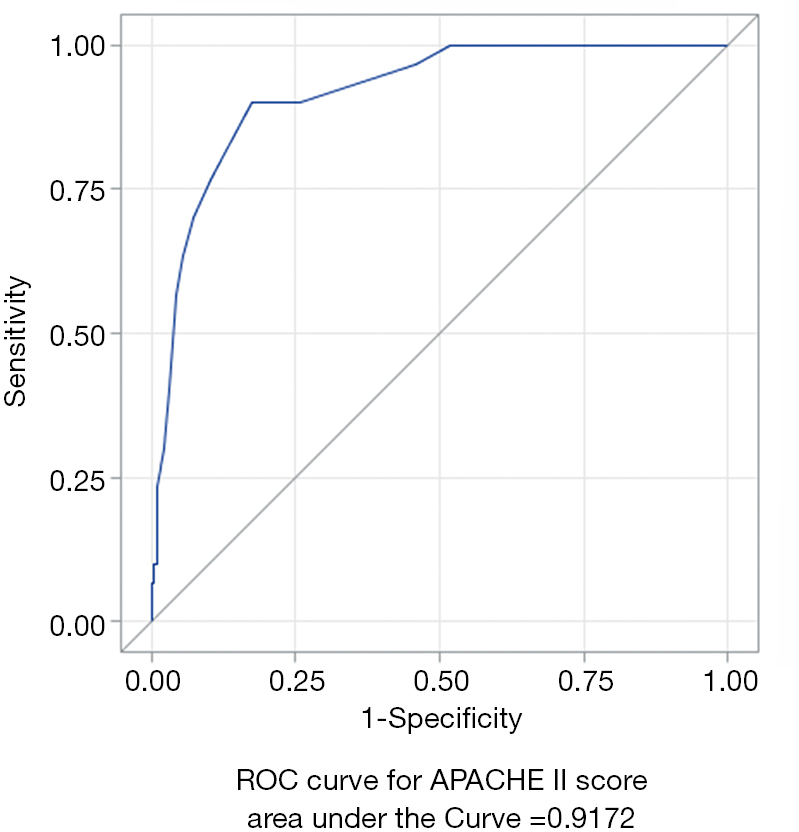 Among other pre-operative biomarkers, AST >80 µ/L was an independent predictor besides APACHE II score. One study found that elevated AST levels was significant in univariate analysis but marginally insignificant in multivariable analysis (OR =3.204; 95% CI, 0.986–10.409, P=0.0527) (13). A high AST level may result from organ injury (liver, heart, muscle, etc.) and/or inflammatory response to acute stress. Abnormal baseline AST may also indicate pre-existing liver disease, or organ ischemia during TAAD. Another research showed that TAAD patients’ AST level also tended to increase after surgery (14). Because gastrointestinal complications (15), kidney injury (16), myocardial ischemia are frequently present during or after TAAD surgeries, patients with abnormal pre-operative AST level at baseline might have a greater organ injury or inflammatory response during and after surgery, which may be associated with higher mortality. This result may also suggest that liver protection and anti-inflammatory treatment should be further investigated in patients treated surgically.

TAAD surgeries are technically challenging and require extra-corporal cardiopulmonary bypass. We found that patients whose XCT more than 2 hours had over 4 times higher risk of in-hospital mortality. It is not new that long XCT is related to patients’ death in general heart surgeries, but such data are lacking in TAAD surgeries. Nissinen et al. found that XCT >150 min was associated with a high risk of 30-day mortality (OR =1.21/30 min, 95% CI, 1.01–1.52) independently of the complexity of surgery (17). Doenst et al. also found that XCT was an independent predictor of mortality for patients with LVEF >40% regardless of surgery complexity (OR =1.014 per min of XCL, 95% CI, 1.01–1.02) (18). Regarding TAAD, Goda et al. found that TAAD nonsurvivors had much longer XCT than survivors (206±96 vs. 161±58 min) (13). Some researchers had also found that long CPBT was related to mortality (19-21). In our study, CPBT was a significant risk factor in univariate analysis, but not significant after adjusted for APACHE II score and AST (230–260 vs. <230 min, HR =2.193, 95% CI: 0.654–7.353, P=0.2034; >260 vs. <230 min, HR=3.127, 95% CI, 0.997–9.812, P=0.0507). XCT remained significant in adjusted models. XCT and CPBT were highly correlated in our data (correlation coefficients =0.74332, P<0.0001), and XCT length is the determinant factor of CPBT length. We believe that they are similar important predictors, but XCT might have slightly better predicting value. A prolonged XCT indicates technical challenge and/or complications during surgery, which might affect patient outcome, such as longer ICU stay (22) and TAAD postoperative renal impairment and renal failure (23). These factors might then affect patents’ in-hospital mortality. Therefore, improving intra-operative management and shorten XCT is an important way to improve in-hospital mortality.

This study had several limitations. First, this was a single center study and the sample size was relatively small. Less than 5% of the patient population were older than 65, which limits generalizability in elderly patients. Second, while prolong CPBT time itself increases mortality, surgery complexity and intraoperative issues might be confounding factors. Third, over-fitting might be a problem when we used Apache II score in disease with low event counts. Since we lacked the data of some important indexes (AaDO2 or PaO2, pH arterial, respiratory rate, serum sodium, serum potassium, Glasgow coma scale), we were not able to decompose APACHE II score system. We also could not collect the data of the five principle factors discovered by IRAD. Further research with more comprehensive data will be needed to better identify predictors to TAAD in-hospital mortality.

Funding: This work was supported by the Natural Science Foundation of Guangdong Province, China [#2016A030313763] and Guangzhou Science, Technology and Innovation Commission [#201707010322].