Chronic obstructive pulmonary disease (COPD) is a major threat to human health. Epidemiological data (1) shows that the prevalence of COPD patients aged above 40 years old in China is 8.2% and each year COPD patients encounter acute exacerbation (AE) on 0.5 to 3.5 occasions. Studies (2) have confirmed that acute exacerbation of chronic obstructive pulmonary disease (AECOPD) is an important cause of hospitalization and death in patients with COPD. This disease represents a serious economic and social burden.

The pathogenesis of COPD remains unclear but is known to involve environmental and genetic factors (3) and inflammatory cells, inflammatory mediators and cytokines. As a pivotal signaling pathway, NF-κB plays an important role in COPD occurrence. Pierrou et al. (4) revealed that the bronchial epithelial cells of COPD patients overexpress a large number of transcription factors including NF-κB. Brown et al. (5) found that the excessive expression or activation of NF-κB1 in patients with COPD and lung cancer led to exacerbated inflammatory responses, making COPD patients more prone to lung cancer.

It is known now that an ATTG insertion or deletion (ins/del) at the 94 bp region upstream of the NF-κB p50 (NF-κB1 gene) transcription initiation site influences COPD development. Studies (6) have shown that the NF-κB1 gene initiation sequence -94ins/delATTG polymorphism influences the expression of NF-κB which in turn affects disease progression. Others (7) have confirmed that the NF-κB1 gene initiation sequence -94ins/delATTG represents a susceptibility gene for chronic lung disease, but the correlation between NF-κB1 gene polymorphisms and the AE of chronic lung disease has not been defined.

In this study, we used polymerase chain reaction high resolution melt (PCR-HRM) to assess the distribution of NF-κB1 gene initiation sequence -94ins/delATTG polymorphisms amongst the Chinese Han population with COPD. We further assessed the relationship between polymorphisms and the AECOPD.

A total of 260 patients with COPD were recruited from the outpatient and inpatient clinics of the Department of Respiratory Medicine of the Third Affiliated Hospital of the Southern Medical University during September 2013 to September 2015. Patients were diagnosed as COPD by following the global initiative for chronic obstructive lung disease (GOLD) diagnostic criteria (3).

The diagnostic criteria were as follows: AE diagnosis criteria: COPD patients diagnosed when their respiratory symptoms continued to deteriorate abnormally with a requirement for other medication regimens (e.g., fluticasone/salmeterol in stable COPD; intravenous hexadecadrol for AECOPD). During disease progression, patients often present with short-term coughs, expectoration, a shortness of breath, wheezing phlegm, increased pus and phlegm or mucus purulent sputum accompanied by fever and other aggravations. A total of 260 healthy subjects were selected as the control group. Body mass index (BMI) and COPD assessment test (CAT) scores were assessed in all patients.

Met the above diagnostic criteria; unrelated; provided informed consent and cooperated with all experiments.

All selected patients and healthy controls were authorized by the Ethics Committee of clinical trials of the Third Affiliated Hospital of Southern Medical University (2016-clinic-042).

A total of 1 mL of EDTA anticoagulant venous blood was collected from both patient and control groups. DNA was extracted using genomic DNA extraction kits according to the manufacturer’s instruction. The concentration and purity of the extracted genomic DNA were analyzed on a DNA quantitative analyzer. DNA samples were diluted to 30 ng/µL and stored at –20 °C.

PCR-HRM was used to detect NF-κB1 gene initiation sequences and regional polymorphisms. PCR sequences were as previously described (8). Upstream primer: 5'-CATGACTCTATCAGCGGCACT-3', downstream primer: 5'-GGCTCTGGCTTCCTAGCAG-3'; product length: 152 bps. Primers were synthesized by Weijiki (Shanghai) Trading Co., Ltd. PCRs were performed using Type-it HRM PCR kits. PCR reaction conditions were as follows: initial denaturation for 5 min at 96 °C; denaturation for 20 s at 96 °C; 20 s annealing at 57 °C; extension for 20 s at 72 °C; 40 cycles. HRM analysis and PCR reactions were performed simultaneously. HRM analysis conditions: 95 °C for 5 min; 40 °C for 2 min; 60 °C for l min, and collect data of melting curves at 0.1 °C/s from 72 °C to 95 °C. Each HRM analysis assessed the ins/ins and del/del genotypes simultaneously. Rotor-Gene 6000 1.7 was used to analyze the real-time data and determine the genotype. A total of 5% of the samples were randomly selected for direct sequencing to verify the HRM technology.

Data were processed using SPSS 20.0. The χ2 test was for group comparisons of the counting data. When the theoretical frequency was <5, a Fisher’s exact test was used for comparisons. Numerical data are presented as mean ± standard deviation (SD) (). Non-normal data were indicated by the median and quartile spacing. A one-way analysis of variance (ANOVA) was used to compare measurement data between the groups. A significance level of α is 0.05 was employed.

No significant differences in age, sex and location were observed between the AECOPD and control groups (P>0.05, Table 1). The median smoking index (per cigarette/1 year) amongst the control group was 301.53±287.59 (pack/years).

Table 1 Characteristics of the AECOPD and control group
Full table 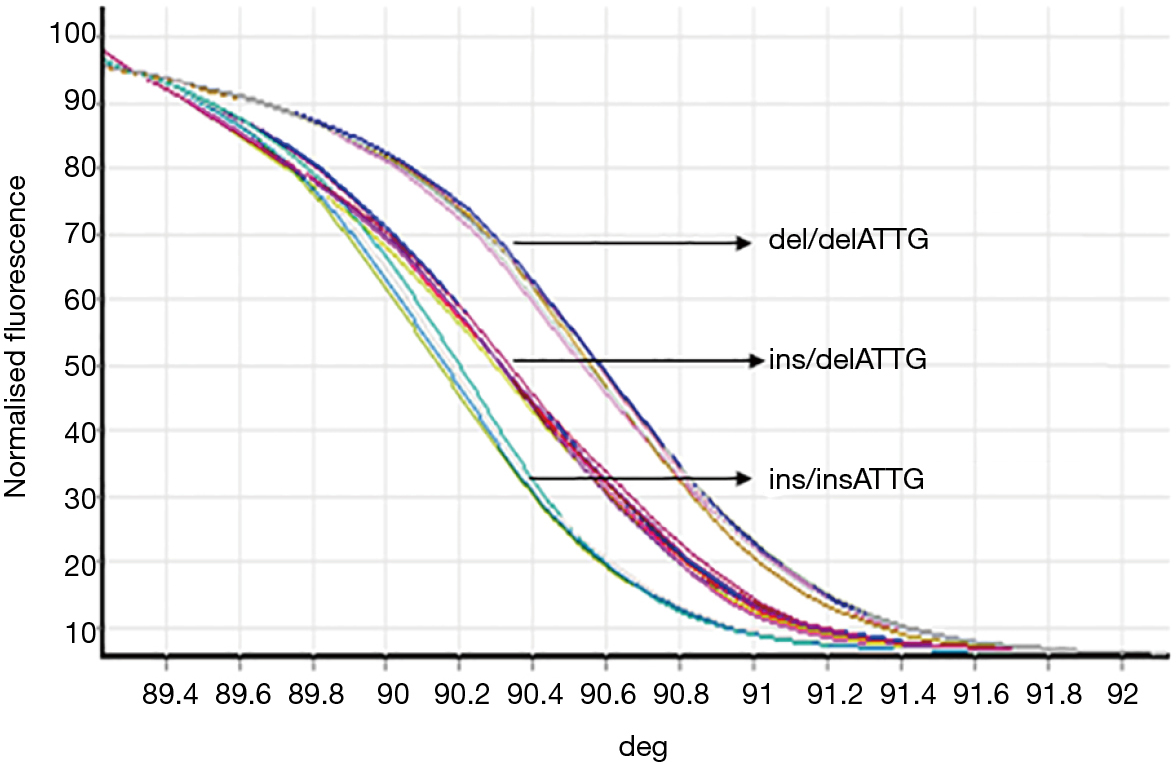 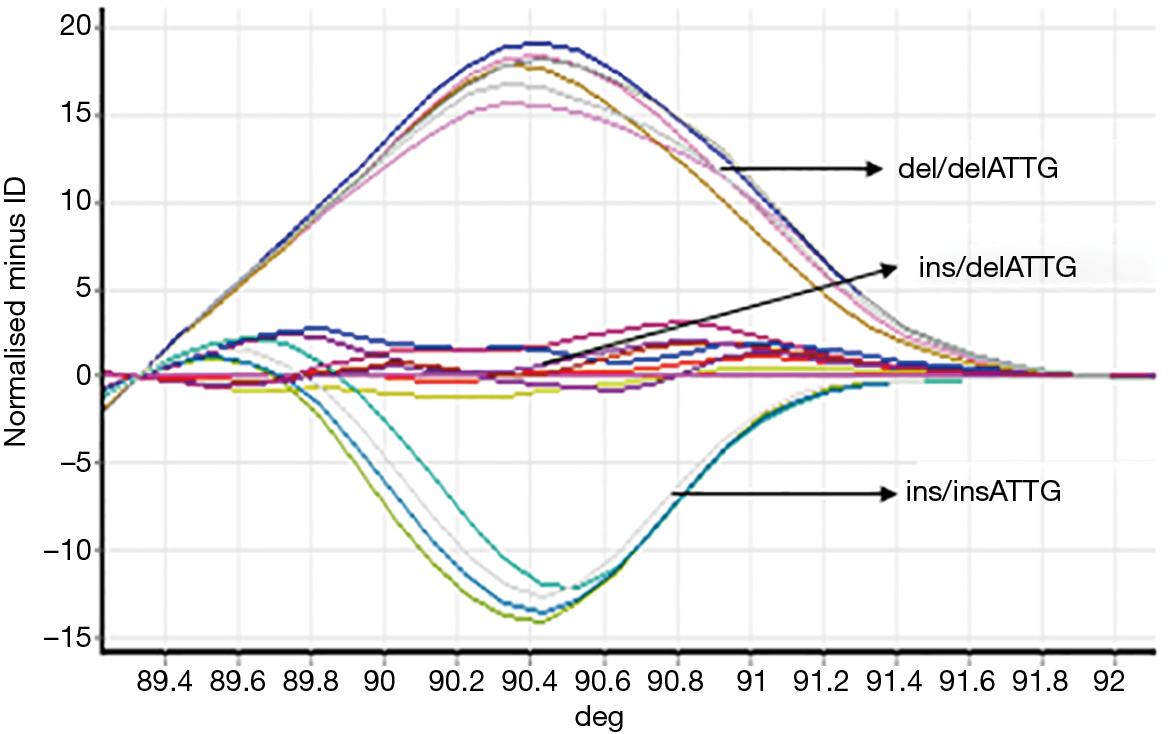 General information of the AECOPD patients

A large number of studies (5,9-10) have shown that NF-κB is associated with COPD associated airway inflammation, which regulates the expression of pro-inflammatory genes that regulate cell proliferation, apoptosis and immune responses. Activated NF-κB delays neutrophil apoptosis and enhances the inflammatory response. In this study, ins/ins, ins/del and del/del were detected from AECOPD patients the majority of which carried ins/ins and ins/del. These results were consistent with studies by Huang and colleagues (11) who found that the lung function of the Chinese Han population with -94ins/insATTG genes or ins/delATTG genes showed reduced lung function (FEV1) that those carrying del/delATTG genes. The results of this study indicated that the COPD patients with -94ins/insATTG or -94ins/delATTG gene sequences had more severe disease with longer hospital stays. It is speculated that carrying the -94insattg gene increases the expression of NF-κB and influences the intensity of the inflammatory response. Karban et al. (6) confirmed that the NF-κB1 gene initiation sequence -94insATTG could increase the transcription capacity of NF-κB1 by ~2-fold, whilst the delATTG sequence reduced the transcription intensity of NF-κB1 in vitro. Adamzik et al. (12) found that the gene initiation sequence of NF-κB1 (-94ins/delATTG) was closely related to the severity of acute respiratory distress syndrome (ARDS), and patients with ARDS with -94del/delATTG genes had a lower incidence of lung injury, indicating poor prognosis.

We observed no differences in terms of smoking history (pack years) between those carrying del/del genotypes and those carrying ins/ins +ins/del genotypes. However, Szulakowski et al. (13) showed that the transcription of NF-κB in lung tissue and phlegm of COPD patients was higher than non-smokers. The various oxides in cigarettes activate NF-κB and AP-1 signaling to induce the expression of various cytokines and participate in the inflammatory processes of lung tissue. The results of the study were inconsistent with previous proteomic analysis, and thus require further verification (14).

We found that the NF-κB1 initiation sequence -94ins/delATTG is a susceptible gene for the development of AECOPD. As a result, monitoring the polymorphism permits the ability to prevent the AECOPD, providing a theoretical basis for individualized treatments. However, the sample size of this study was small and studies with multi-center large sample sizes in combination with proteomic analysis are required to confirm the role of the NF-κB1 gene initiation sequence -94ins/delATTG during the AECOPD.

Conflicts of Interest: The authors declare that they have no conflicts of interest.

Ethical Statement: The authors are accountable for all aspects of the work in ensuring that questions related to the accuracy or integrity of any part of the work are appropriately investigated and resolved. All selected patients and healthy controls were authorized by the ethics committee of clinical trials of the third affiliated hospital of Southern Medical University (2016-clinic-042).