The video-assisted thoracoscopic surgery (VATS) lobectomy is a safe and effective approach for the treatment, not only of early stage lung cancer but also for more advanced disease.

It represents a technical challenge, perhaps due to perceived technical challenges when compared to the more conventional open approach and because of the intraoperative complications, particularly early in the surgeon’s learning curve.

The best strategy for facing the complications of VATS lobectomy is to prevent them from happening. Avoiding complications is subject to an appropriate preoperative workup and patient selection (1).

Planning for a VATS resection to be as safely as possible involves the consideration of the patient’s characteristics, the radiographic appearance of the area of the lung to be removed and the anticipated technical aspects of the case (1).

There are different causes of complications that could lead us to convert to open thoracotomy. Generally, we can classify the reasons for conversion into four categories:

These are some of the technical problems that can lead us to have intraoperative complications.

A fused or complex fissure or true pleural symphysis present a technical challenge to VATS lobectomy. The key to an adequate detachment is to find the correct plane in the pleural cavity and to create a space; then we can perform the adhesiolysis using a combination of sharp and blunt dissection (1). With the uniportal approach we have the advantage in visualizing, with high resolution for details, the apex and the base of the hemithorax (Figures 1,2). 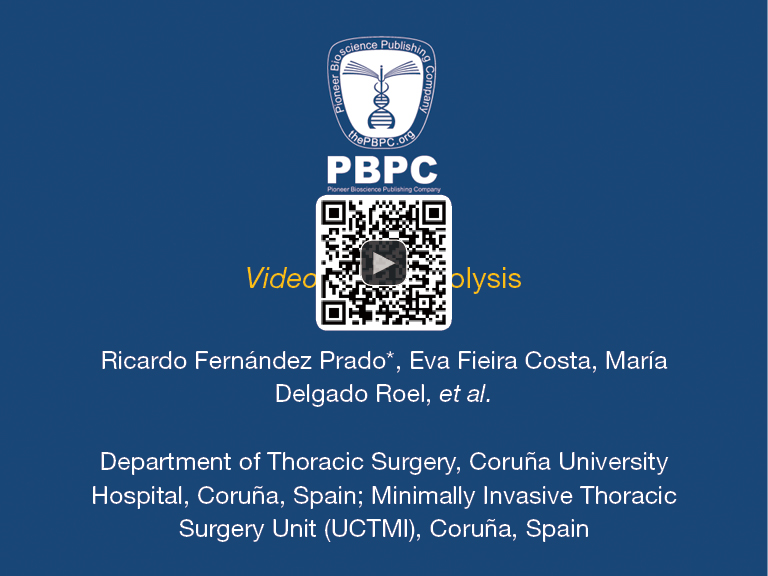 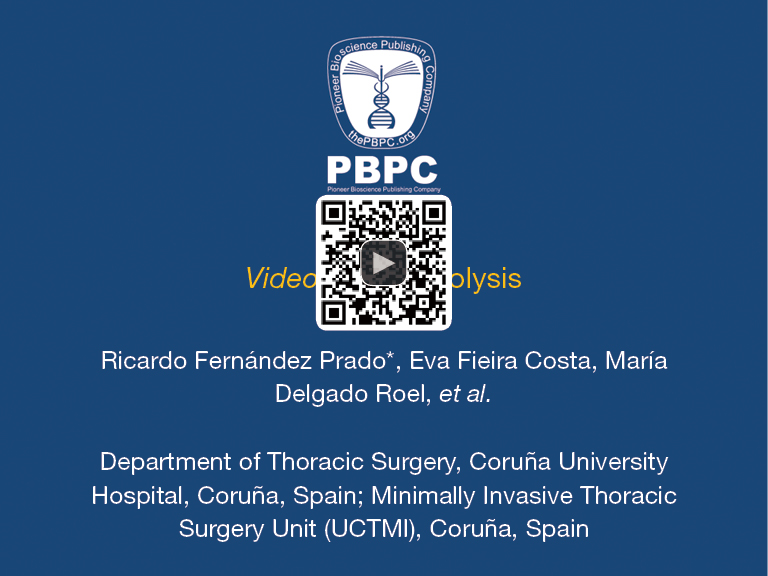 Complex artery/vein or bronchus dissection or a difficult anatomy can also lead to abandonment of the VATS approach, although with improving surgeon experience and comfort with VATS lobectomy, these cases can be accomplished. The presence of calcified hilar and/or periarterial lymph nodes can likewise complicate vascular dissection. Regarding complex hilar structures dissection, the key is to find the adventicial plane (Figure 3). In the video, we see an artery fused to the vein and to the lymph node. Note the utility of the bimanual instrumentation and how we can perform the dissection with simple instruments (curved ring forceps, long scissors, suction and a conventional dissector). 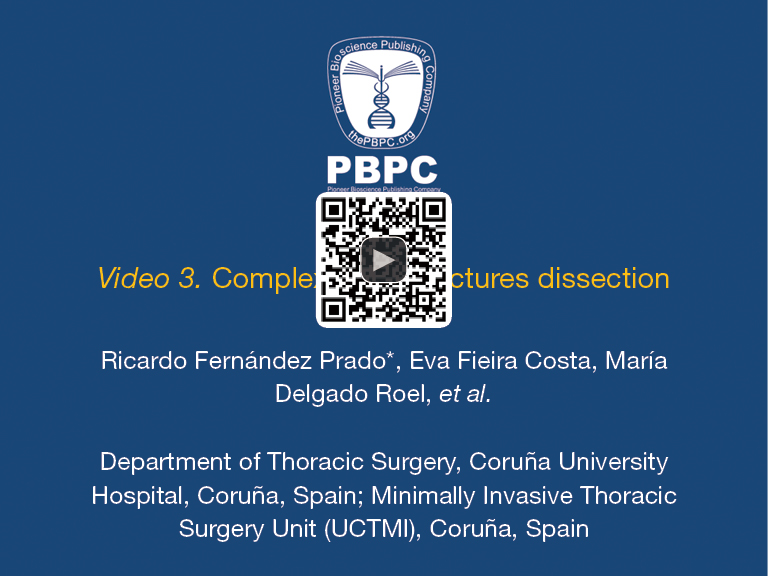 A previous ipsilateral surgery is also no longer a contraindication as Redo-VATS surgery had been reported.

Another reasons for conversion could be emphysematous lung or the absence of lung collapse, due to the small space available to perform the surgery. The difficulty for digital palpation or identification of the target lesion (mostly, small nodules) is another cause of conversion.

The uses of high doses of prior chemo-radiotherapy have previously been considered a relative contraindication, but VATS lobectomy can be performed safely and effectively for these patients (1).

Finally, chest involvement requires thoracotomy for resection, but VATS can be used to perform the lobectomy and allow placement of the better incision to the chest wall removal.

If bleeding occurs, a sponge stick should be available to apply pressure immediately to control the hemorrhage; it is always important to remain calm and not to panic. With the bleeding temporarily controlled, a decision must be made promptly as to whether thoracotomy is needed (3) or if it can be solved through the VATS approach. This will depend mostly on the surgeon’s experience.

Focusing on the artery bleeding, care must be taken during the vascular dissection as well as to the lung traction, especially if an advanced case is performed. Dissection of the vessels can be difficult due to a wide variety of causes and bleeding can be high even by thoracotomy depending on the complexity of the procedure. For example, during the approach of the artery from the hilum, a bleeding can occur (Figures 4,5). In this case, we did not know exactly where it was coming from. So, the first step in order to achieve any bleeding control was made: compression with a sponge stick and consideration of the appropriate strategy. Then, the anterior arterial trunk was divided and the anterior portion of the minor fissure completed; these steps allowed us to reduce tractions and improve the vascular control. Then the posterior ascending arterial branch to the right upper lobe could be identified and also another arterial branch (which probably was the one that caused the bleeding). At last, the bleeding was controlled with a proximal vascular clip. 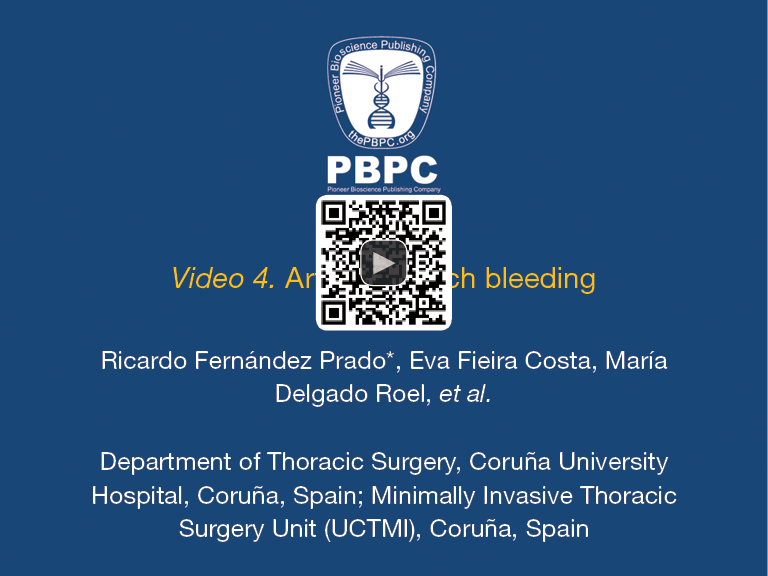 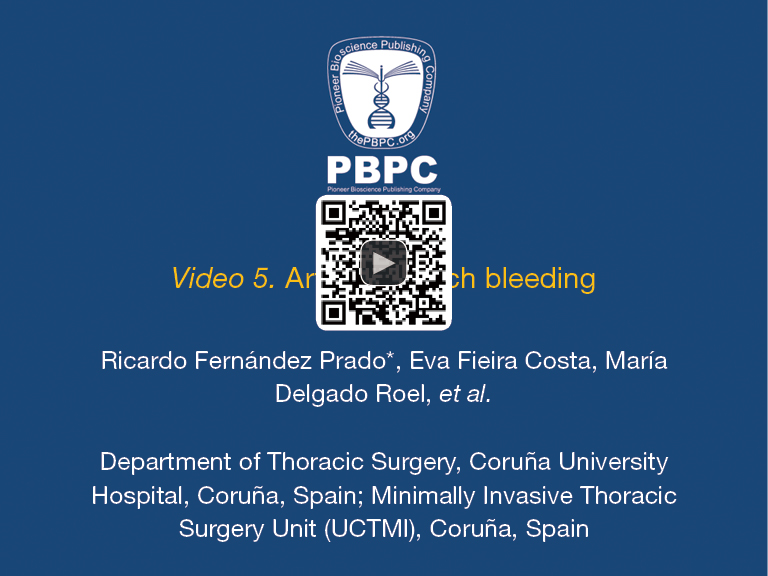 Regarding the correct planning of the VATS lobectomy, consideration of the patient’s characteristics is very important. Furthermore, certain vascular anomalies resulting in conversion are often visible on preoperative enhanced CT. Care must be taken to avoid injuring unexpected small branches (Figure 6). In this case a left upper lobectomy was performed. After the bronchus transection, a bleeding was caused. Again, the first step must be to remain calm and think of a new strategy. “Are we able to control the bleeding?” “Is the bleeding very important?” Once these questions were answered, we placed a vascular clip using bimanual instrumentation and the complication was solved through VATS. 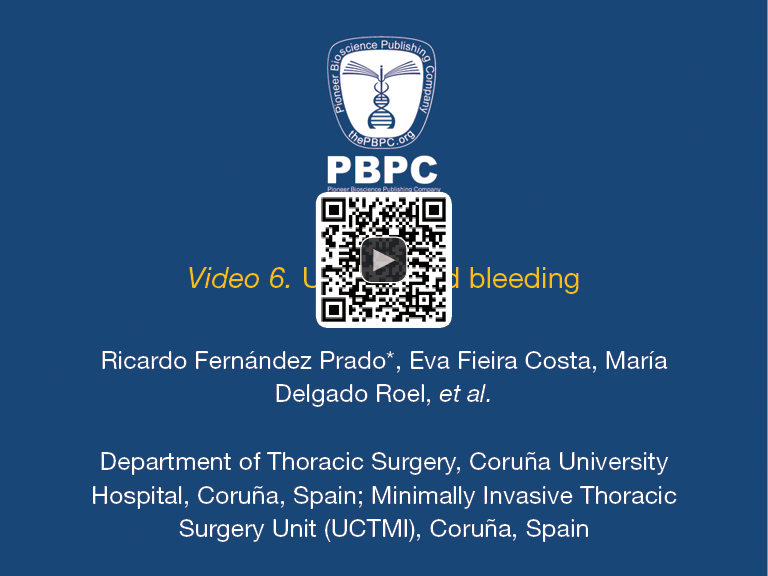 Nevertheless, the use of several developments to avoid the bleeding problems or even to the vascular division can also be the cause of bleeding. For example, an unexpected displaced clip can cause a bleeding (Figure 7). Looking at the top left corner we can identify the source of the bleeding: an accidental displacement of the proximal vascular clip during the lung retraction. We proceed to stem the bleeding with compression. Then, the change of the lung exposure allowed us to identify the source of the bleeding and finally reclipping the artery. 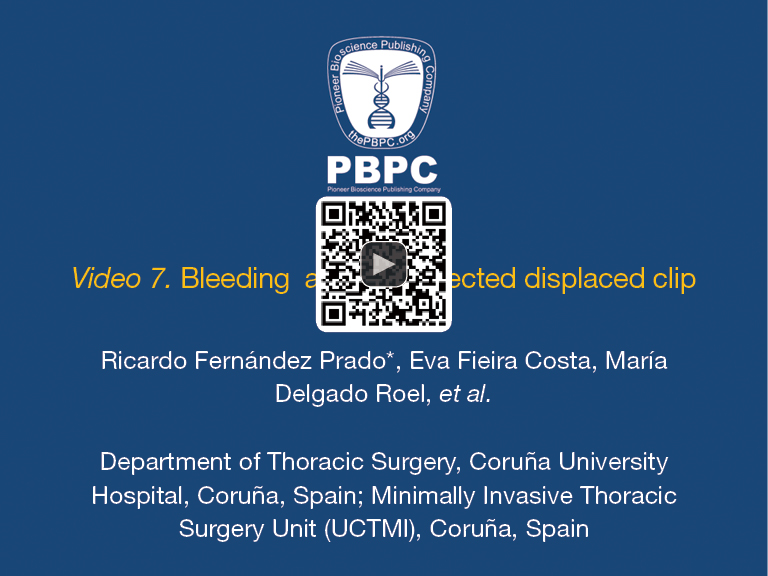 Another key point to take into consideration occurs during the lymphadenectomy, due to the major vascular structures nearby. As in this situation, while the right paratracheal lymphadenectomy was being performed (Figure 8), the azygos vein was injured in its proximal aspect without us noticing. The bleeding was controlled with a vascular clamp and by stapling the azygos vein. 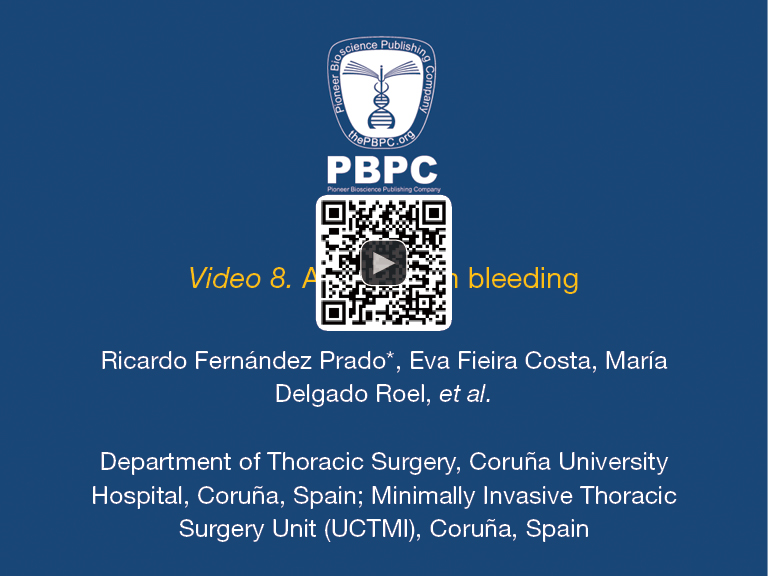 With advanced skill and experience in VATS surgery, in the event of minor to moderate bleeding, conversion can often be avoided. For example, during the performance of an upper lobectomy, one of the branches can be injured (Figure 9). After compression, the mediastinal trunk was dissected and controlled, so the tear was sutured. 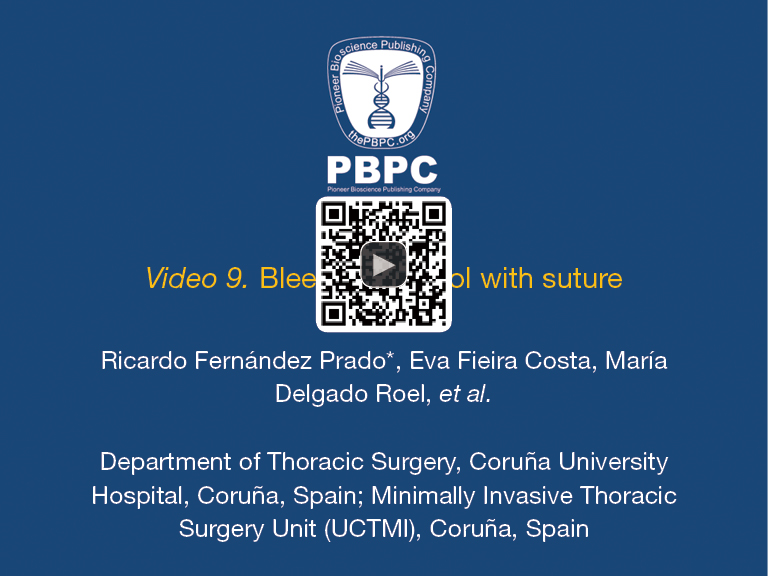 Finally, the last example of bleeding control: a left upper lobectomy performed on a patient who had received prior induction chemotherapy. During the arterial dissection, a branch was damaged. Then we dissected one of the branches of the vein in order to get obtain a good angle to control the mediastinal trunk of the artery. Once the mediastinal trunk was controlled, the arterial branch was clipped in the proximal and distal aspect (Figure 10). 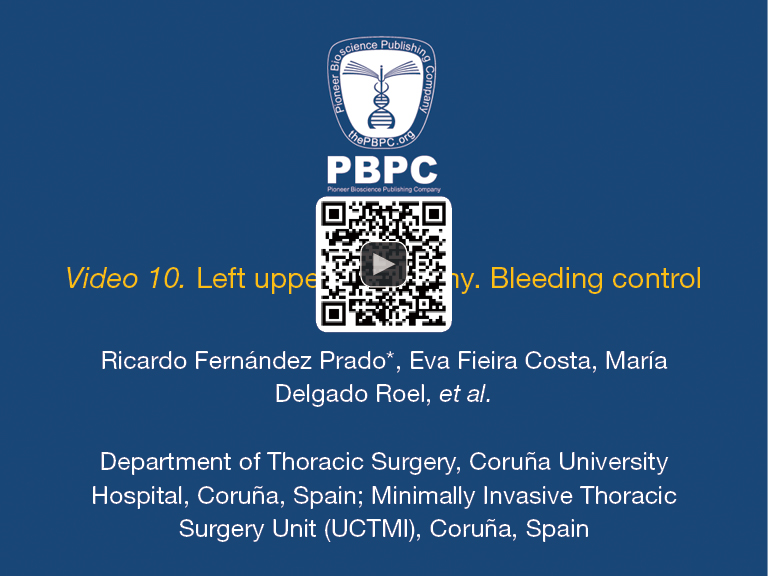 Although this is not the most common cause of conversion, it has to be taken into consideration. The failure of the stapler or a major air leak after performing a lobectomy on a patient with severe emphysema or a complex/fused fissure, can lead to conversion in order to repair the air leak.

Another cause would be the bronchus or trachea injury by the endotracheal tube. As in the video (Figure 11), after a uniportal VATS left lower lobectomy, small bubbles were identified deep down in the subcarinal space during the dissection of the subcarinal station. Also, mediastinal emphysema and air leak from the aortopulmonary window were noticed. There was no air leak from the bronchus stump, nor at the anesthetic monitor, so the patient was extubated. When the patient was at the ICU, a CT scan was performed due to subcutaneous emphysema, where a right tracheal wall disruption caused by the double lumen tube was observed. Suturing the wall of the trachea through a right thoracotomy repaired the problem. 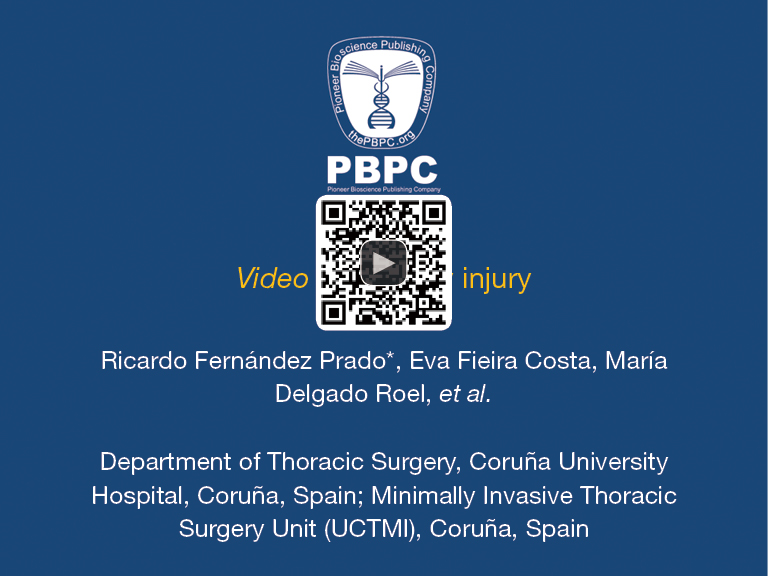 During VATS lobectomy the most important aspect is to prevent complications. Avoidance is enhanced by a solid knowledge of the anatomic relationships, careful dissection, awareness of the potential complications and the judicious conversion to thoracotomy when appropriate (2). If a complication occurs, we have to consider the management strategy. It is essential to have a good preoperative workup, the bimanual instrumentation and a good exposure of the lung or the target area. Ultimately, the decision for conversion is left to each surgeon’s skills and patience. The surgeon has to feel comfortable with the approach, whatever it is. Finally the most important consideration above all is never panic and always keep calm.