Obstructive sleep apnoea and open heart surgery: a review of its incidence and impact to patients

Obstructive sleep apnea (OSA) is a disorder where there is cessation of breathing during sleep that occurs repetitively due to the complete or partial pharyngeal obstruction and the reduced pharyngeal muscle tone during sleep, particularly in obese individuals (1). OSA has both health and social implication. It can lead to excessive daytime sleepiness, cognitive dysfunction, and reduce work performance. Studies also suggest that OSA may contribute to the development of systemic hypertension (2), cardiovascular disease (3), and abnormalities in glucose metabolism (4). A strong association between OSA and coronary artery disease (CAD) has been shown (5).

Recognising OSA in surgical patients preoperatively can reduce the problems related to OSA. Appropriately timing the extubation or preparing respiratory support with continuous positive airway pressure (CPAP) post extubation has helped to reduce the postoperative complications related to OSA (6). Postoperative complications of OSA can also be reduced with the administration of non-opioid analgesia in the postoperative period (7).

Patients can be screened for OSA by using a screening tool in the form of questionnaire such as the STOP Questionnaire (S: snore loudly, T: daytime tiredness, O: observed to stop breathing during sleep, P: high blood pressure). A modified form of this questionnaire includes BMI, age, neck circumference and gender (STOP-Bang Questionnaire). Polysomnography (PSG) remains the gold standard in diagnosing OSA, but it is costly and requires trained personnel to operate. Besides questionnaires, a portable sleep monitoring device, ApneaLink (ResMed, San Diego), which records nasal pressure, thoracic excursion, body position, pulse oximetry and heart rate can be used as a diagnostic tool. The device can be applied to patients to collect the overnight data (Figures 1 and 2). 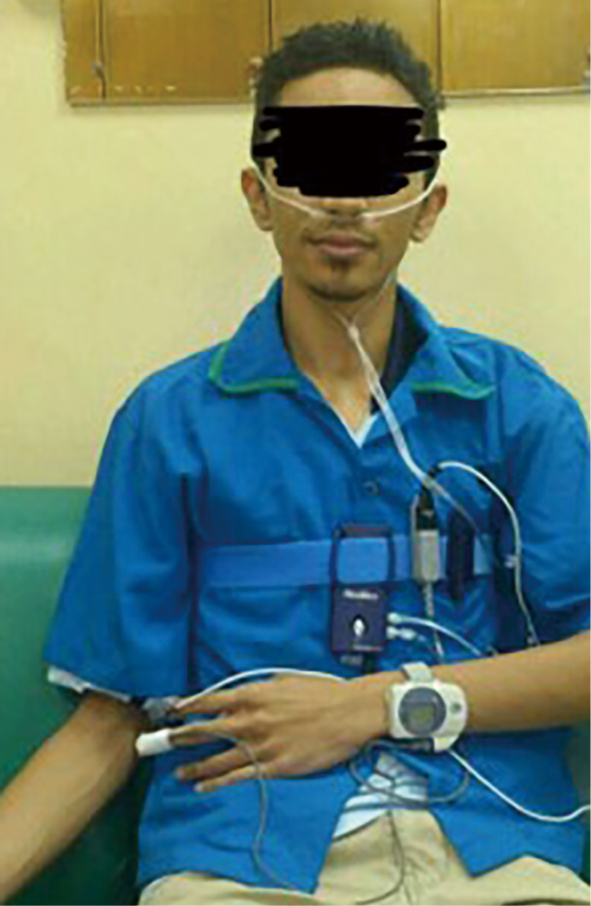 Figure 1 Apnealink being placed on our patient on the night before surgery. 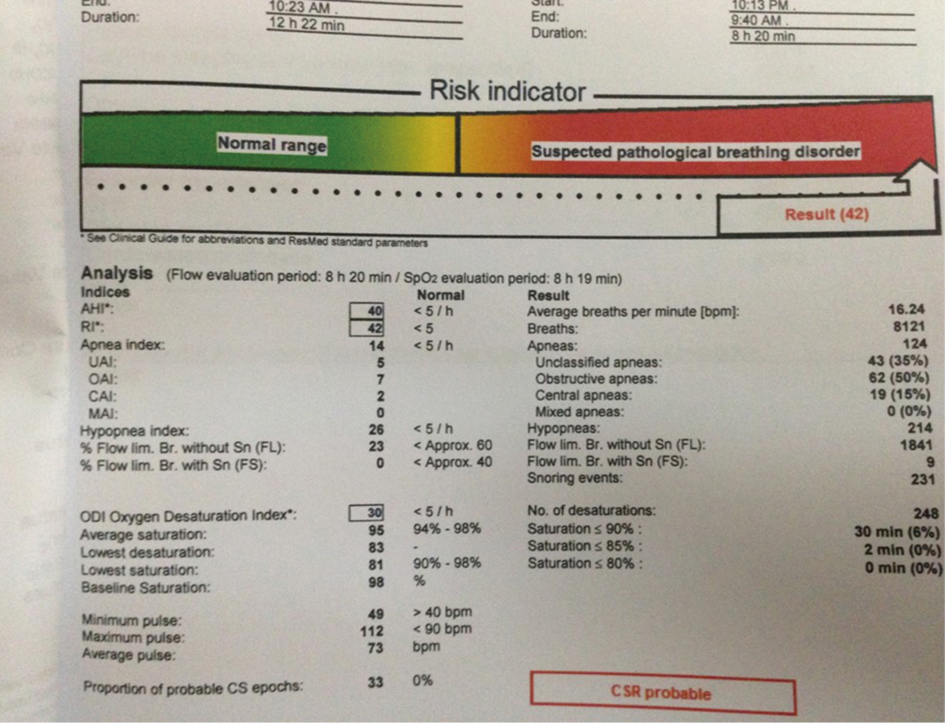 Figure 2 Printed report from the Apnealink device which is used for the data collection.

Apnea is defined as the complete cessation of airflow for at least 10 seconds. There are three types of apneas to be scored: obstructive, central and mixed. In OSA, respiratory effort is maintained but ventilation decreases or disappears because of partial or total occlusion in the upper airway. Central sleep apnea is defined as reduced respiratory effort resulting in reduced or absent ventilation, usually seen in patients with heart failure. Mixed apnea is often characterized by starting with central apneas and ending with obstructive events, these events are thought to be pathophysiologically related to obstructive apneas and are considered to be part of the obstructive sleep apnea hypopnea syndrome (OSAHS). A hypopnea is defined as a reduction in airflow (30–50%) that is followed by an arousal from sleep or a decrease in oxyhemoglobin saturation (3–4%) (8,9).

The gold standard diagnostic test for OSA is overnight laboratory PSG, which is deemed inconvenient, not cost effective and requires trained personnel to apply the sophisticated equipment that involves multi-channel polygraph recordings. It requires a sleep laboratory with extensive facilities with full time overnight skilled technician.

Due to the expensive and long waiting list for overnight sleep study, a more practical and low cost method of diagnosing OSA involves both screening questionnaire and portable sleep monitoring device that can narrow down numbers of subjects that warrants sleep study based on the clinical prediction scoring and unattended device that can be applied at the comfort of own home.

There a few screening tools used to screen for high risk of OSA including the widely used STOP/STOP-Bang questionnaires, Berlin Questionnaire, Wisconsin questionnaire, the Sleep Disorder Questionnaire (SDQ) and Hawaii sleep questionnaire. The Berlin Questionnaire is a commonly used screening tool in primary care that consists of 11 questions of 3 categories, including the quality of snoring, daytime tiredness and co morbidities. However, going through 11 questions maybe time consuming for anaesthetists or surgeons. A simple and concise STOP-Bang questionnaire consists of 8 questions which are snoring, tiredness, observed stopped breathing during sleep, pressure, BMI, age older than 50, neck circumference >40 cm and gender male. A score of 3 or greater (1 for each yes) is considered positive and high risk for OSA (10). The diagnostic ability of this questionnaire has a sensitivity of 93%.

According to the American Academy of Sleep Medicine (AASM) (11) the diagnosis of OSA is confirmed if the number of obstructive events (apneas, hypopneas + respiratory event related arousals) on PSG is ≥15 events/hour in the absence of associated symptoms or ≥5/hour in a patient who reports any of the following: unintentional sleep episodes during wakefulness; daytime sleepiness; unrefreshing sleep; fatigue; insomnia; waking up breath holding, gasping or choking; or the bed partner describing loud snoring, breathing interruptions, or both during the patient’s sleep.

The frequency of obstructive events is reported as an apnea-hypopnea index (AHI).

The aim of this study is to determine the incidence of OSA in patients undergoing cardiac surgery at University Malaya Medical Centre (UMMC). The primary end point is the prevalence of OSA. The secondary end points are: (I) post-operative complications in patients with or without OSA; and (II) predictive factors associated with OSA. This is a prospective study of a retrospective data of patients who had undergone open heart surgery in UMMC from 1st July 2012 till 30th May 2013. Medical ethics clearance obtained from University Malaya Medical Center Medical Ethics Board. Subjects were recruited when they were admitted to the ward for their elective open heart surgery. The inclusion criteria consisted of all stable patients scheduled for elective open heart surgery.

(I) They have a previous diagnosis of OSA or any sleep-related breathing disorder.

(II) They are unwilling or physically unable to use the portable PSG on the night before surgery.

(III) Use of oxygen therapy during the night of the sleep study.

(IV) Use of medications that could affect sleep.

(V) Presence of any serious respiratory or cardiac medical conditions that the investigator should decide as unsafe to participate in the study.

All the data were recorded in a booklet and this include all the pre-operative, intraoperative, postoperative monitoring, risk assessment questionnaires: STOP-Bang and Epworth sleepiness scale, and the portable sleep monitor. The portables sleep monitor is easy to use (Figure 1) and the printed data is easy to interpret (Figure 2). Subjects were followed for 30 days post-surgery. Results were recorded in SPSS version 18 and analysed to compare differences between the two groups.

Based on the portable sleep studies applied the night before surgery, about 61.4% of the patients were diagnosed with OSA with 56.5% mild, 21.0% moderate and 22.5% severe OSA.

There is difference in the waistline, the thyromental distance and intercisior distance between the OSA and non-OSA group.

The correlation between the complications and presence of OSA are tested with Pearson correlation coefficient (r2) but none of them were significant (<1.0).

The post-operative ventilatory support in OSA group (7/62) is 10% higher than the non OSA group (4/39) (with odds ratio 1.11). There was no pulmonary embolism or deep vein thrombosis in either group. No difference in the length of ICU stay and hospital stay occurred between the OSA and non OSA group.

The post-operative complications among the mild, moderate and severe OSA groups did not show any significant difference. There were no pulmonary embolism, deep vein thrombosis occurred in the OSA group. 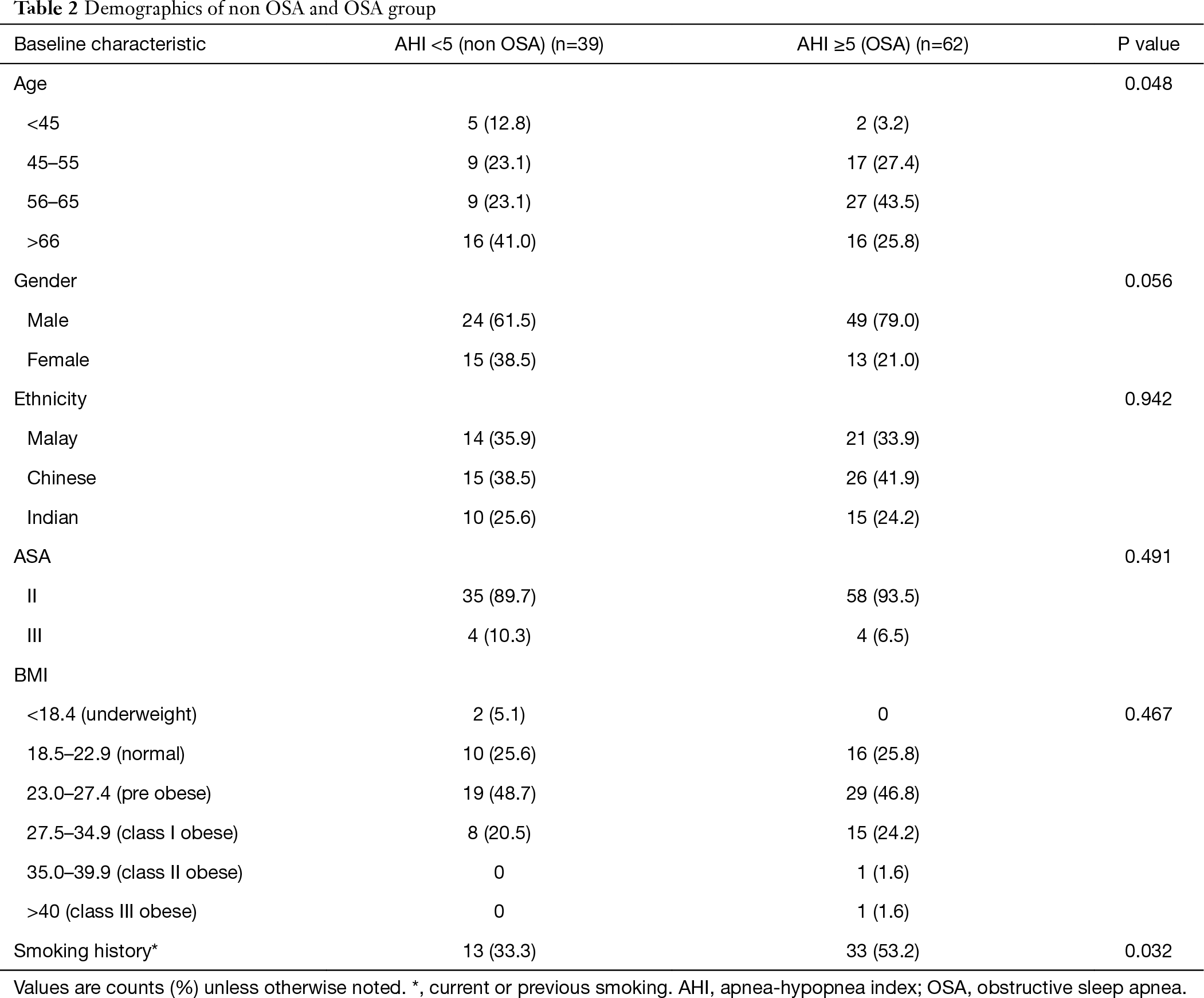 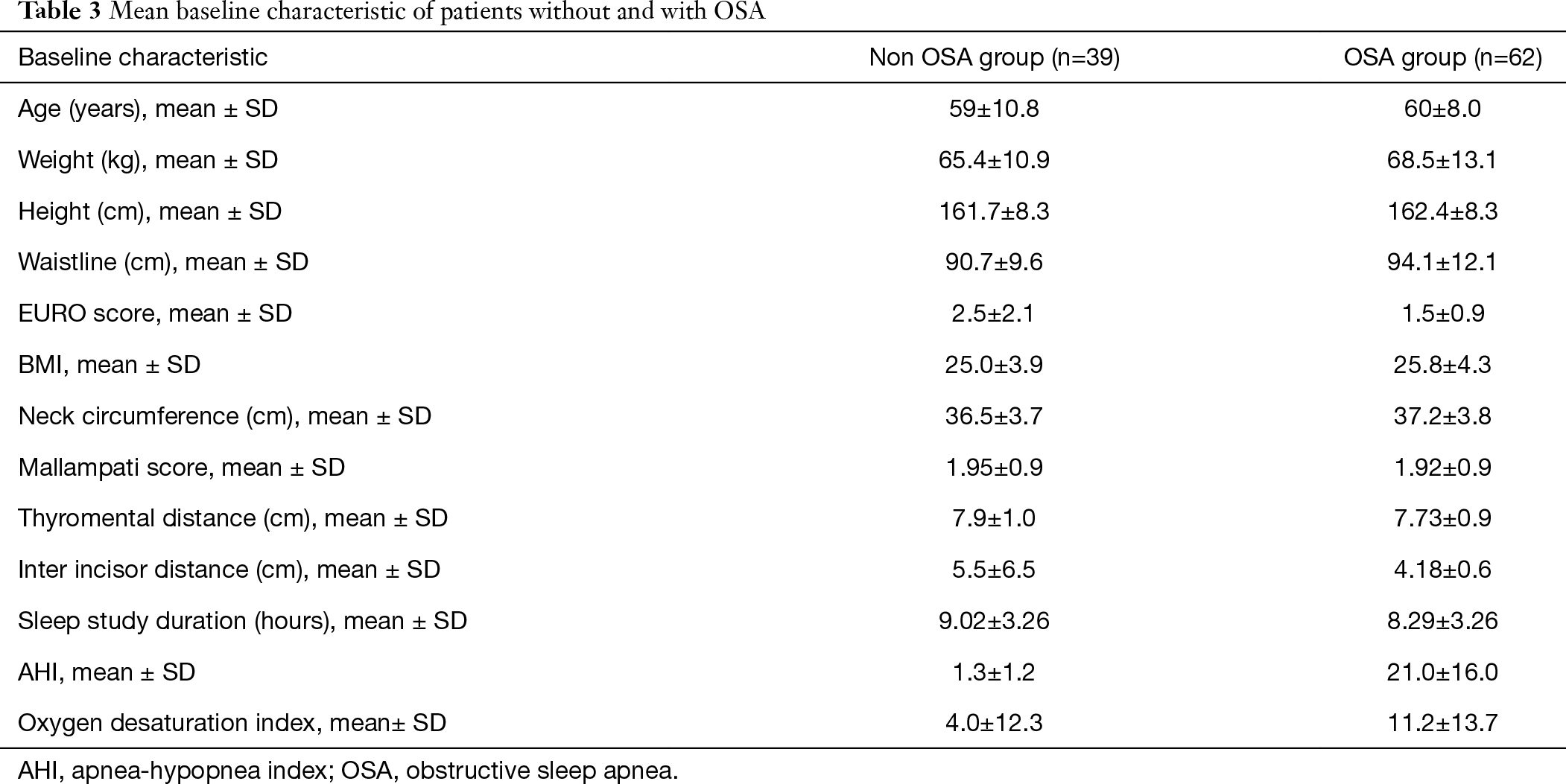 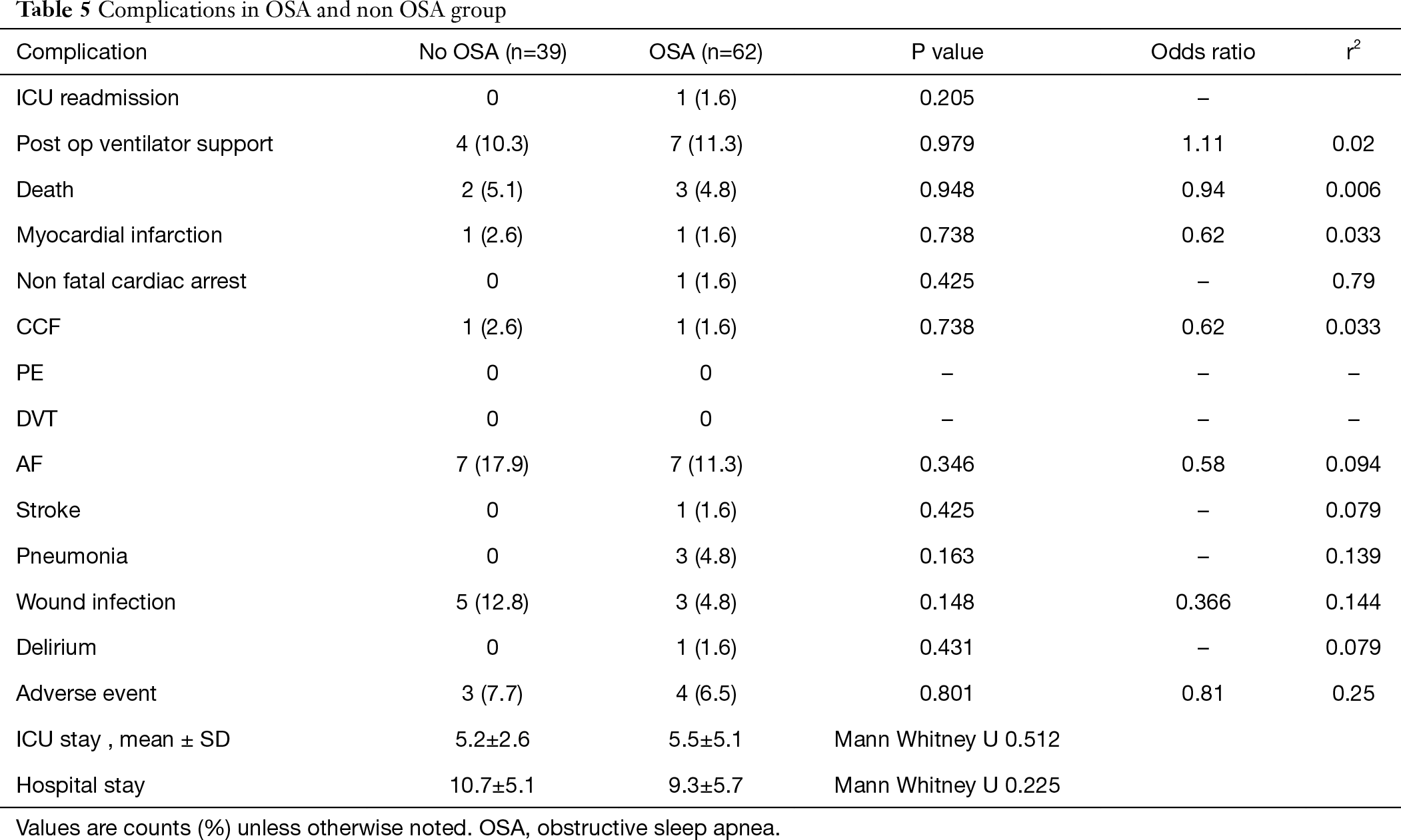 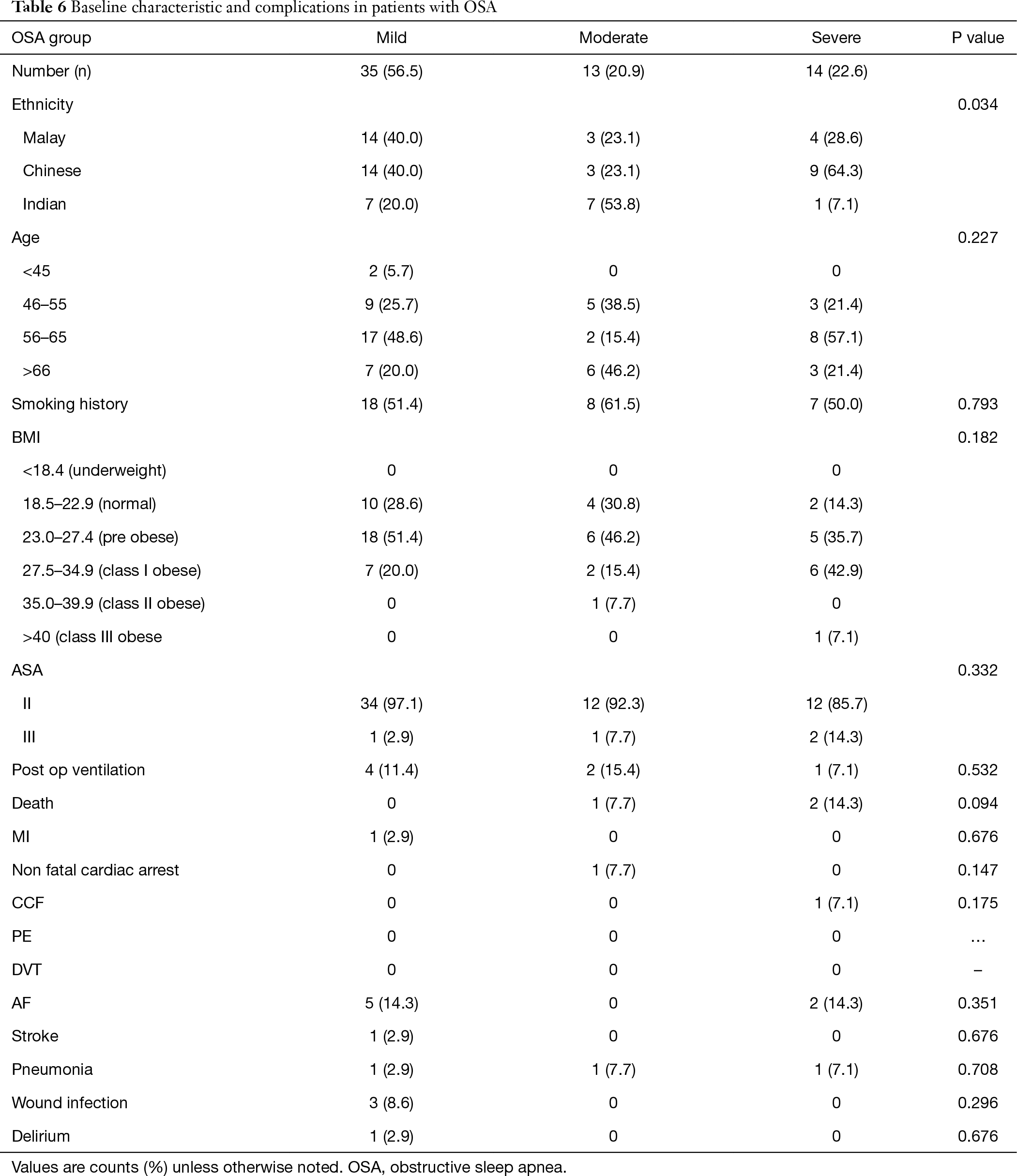 In this study, we evaluated the prevalence of OSA in patients undergoing open heart surgery by using the STOP-Bang questionnaire and a portable study device, ApneaLink (ResMed, San Diego) which was applied to the patients in the hospital before surgery. The prevalence of OSA was 61% with mild 56.5%, moderate 21.0% and severe 22.5% OSA. Among the OSA group, 43.5% were moderate to severe OSA.

Our findings are similar to another Brazil study that found 87% of patients referred for coronary artery bypass graft had OSA and 54% were moderate to severe OSA (12). Their prevalence of OSA patients is higher due to higher BMI.

In our study, the percentage of new onset atrial fibrillation was unexpectedly higher in the non OSA group (7, 17.9%) than the OSA group (7, 11.2%). An atrial tissue gene was found in patients with OSA and the gene expression is less in OSA patients that led to development of atrial fibrillation. This could be due to the recurrent hypoxaemia episodes that downregulate the atrial cardiomyocytes (13). Repetitive hypoxemic events also induce inflammatory cytokines productions causing endothelial dysfunction and heart remodelling (14,15).

We found patients with OSA had higher incidence of pneumonia (4.8% vs. 0), post-operative ventilatory support (11.2% vs. 10.0%) and ICU readmission (1.6% vs. 0). Previous study (16) also reported higher postoperative respiratory failure rates in patients with OSA. There are only few studies that examined cardiac postoperative complication in OSA subjects (17). Most reported complications other than AF are myocardial infarction and non AF arrhythmias, and these are all in non-cardiac surgeries (10,18-20).

From our observation, patients were reserved especially female patients when asked about snoring habits and sleepiness. Patients have difficulties in giving response to the Epworth sleepiness scale that contains 8 situations with 4 grading scales. The STOP-Bang questionnaire was easy to use as it incorporates anthropometric measurements and does not require patients to give grading scale.

Since the early days of overnight sleep laboratory PSG, various medical technology companies have started to produce portable sleep monitors. The waiting list for a laboratory PSG can be as long as 2 years due to limited study slots and requirements of well trained technicians. This has enabled the development of reliable and highly sensitive portable sleep monitors that can be used as an alternative to the traditional PSG (22). Previous studies found that home portable monitoring has high sensitivity in detecting OSA compared to in laboratory PSG (23,24).

In our study there was a 1.6% incidence of stroke and delirium in the OSA. A previous study found an increase-risk of stroke of 1% for every increment of AHI (25). A pilot study in assessing the relation of postoperative delirium and OSA in (26) found the incidence of delirium is higher in OSA group (53% vs. 20%, P value =0.0123).

As predicted in many of the previous studies, unrecognized OSA can be as high as 61% in patients undergoing elective open heart surgery. They are associated with higher incidence of postoperative complications that includes respiratory, cardiac and other complications. A simple STOP-Bang questionnaire and portable monitoring device can be used to screen and diagnose OSA when patients are admitted to the ward preoperatively. Cardiac patients diagnosed with OSA can be pre-emptively given extra attention in managing their postoperative care.

Ethical Statement: The authors are accountable for all aspects of the work in ensuring that questions related to the accuracy or integrity of any part of the work are appropriately investigated and resolved. Medical ethics clearance obtained from University Malaya Medical Center Medical Ethics Board.