Although there are guidelines for the management of PSP (1,2) based on various conditions, such as radiological findings or air leakage, there are no guidelines for the age-related management of PSP. The aim of this study was to identify the factors that can prevent postoperative recurrence of PSP in young individuals. We retrospectively evaluated the factors preventing postoperative recurrences including bulla neogenesis, in patients aged <25 years who underwent VATS bullectomy.

Patients underwent VATS according to PSP management guidelines because of the following indications: ipsilateral recurrence of PSP, a prolonged air leak after chest tube drainage, bilateral pneumothorax, and patient wishes (1,2). Persistent air leak was defined as air leak for a period of over 7 days. As previously described (12), the patient was placed in a lateral position under general anesthesia with the ventilation of one lung. The target lesions were determined based on preoperative computed tomographic and intraoperative thoracoscopic findings, including an air leak test under 20 cmH2O of pressure using sterile, distilled water. The target lesions, including the bulla and thickened pleura, were resected with a sufficient margin, using 45-mm cartridge autosutures, and no residual lesions were identified intraoperatively. The staple line was reinforced with regenerated oxidized cellulose and/or fibrin glue, depending on the situation. The choice of procedure (single-port or multi-port VATS) was made based on surgical difficulties which were affected by the number or site of lesions and extent of intrathoracic adhesion. 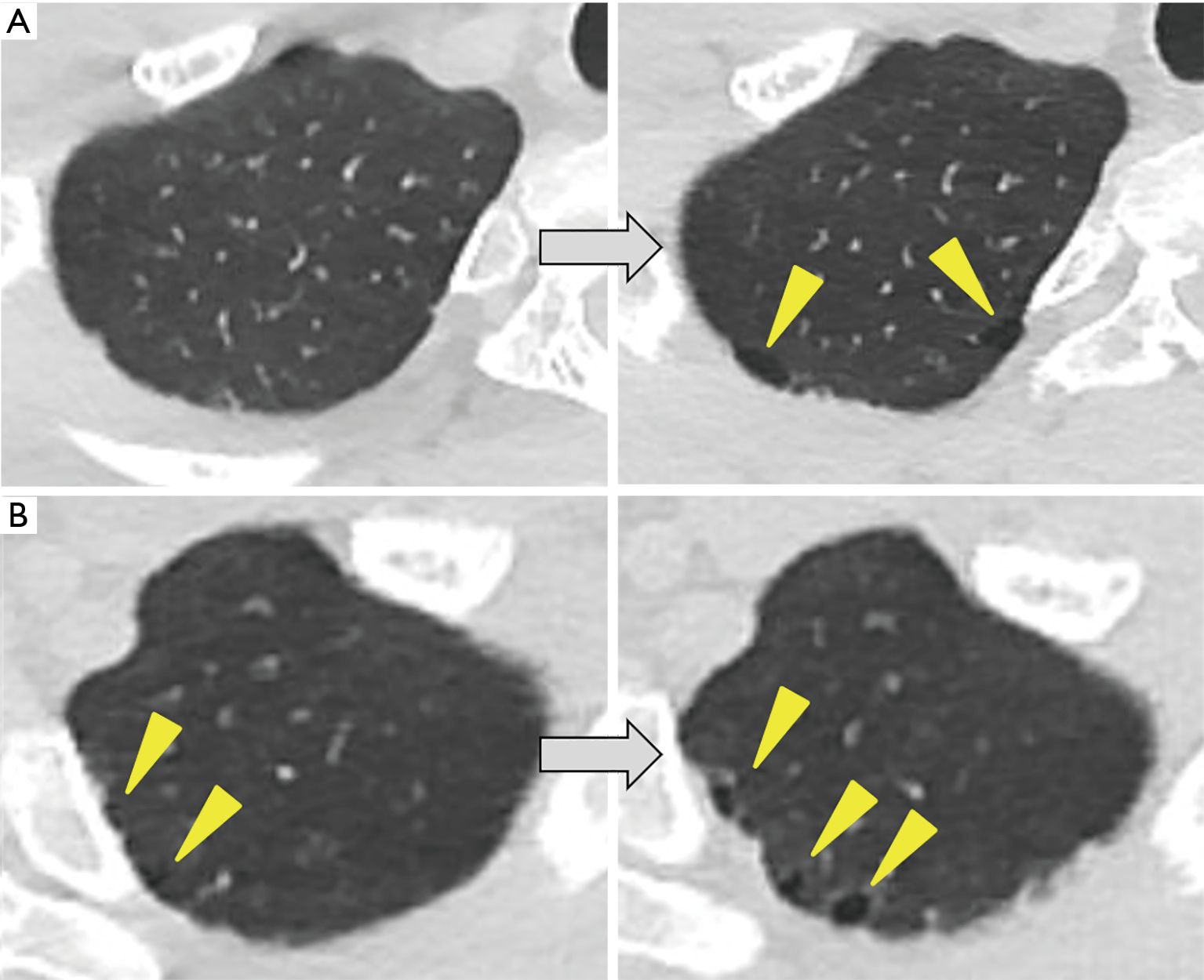 Figure 2 Definition of bulla neogenesis based on high-resolution computed tomography (yellow allows shows bullae). (A) Appearance of new bulla; (B) increase in bulla.

For statistical analyses, continuous variables were presented as mean ± standard deviation or median with range. Univariate analysis of the postoperative recurrence rate of PSP was estimated based on the Kaplan-Meier method and was compared using the log-rank test. For time-dependent factors such as contralateral bulla neogenesis, the Cox regression analysis was used for the univariate analysis. Multivariable analysis of the postoperative recurrence rate of PSP was evaluated according to Cox regression analysis using all factors by stepwise method. The validity of the model was estimated by the likelihood ratio test, Wald test, and score test. A P value of <0.05 was considered statistically significant. The hazard ratio and 95% confidence intervals (CI) were applied to analyze the preventing factors for postoperative recurrence. The data were analyzed using the statistical software EZR package (http://www.jichi.ac.jp/saitama-sct/SaitamaHP.files/statmed.html).

The Institutional Review Board of Takasago Municipal Hospital approved this study (No. 2018-11), and we obtained informed consent from each patient by optout.

Our study showed that BMI ≥18 was also a significant factor preventing postoperative recurrence. Tan et al. reported an association between BMI and PSP recurrence (16). They found low BMI to be a significant predictor [hazard ratio: 3.668 (95% CI: 1.632–7.145), P<0.001] of PSP recurrence among 273 patients on multivariable analysis. They provided several possible explanations for this association, such as unbalanced physical development, deficiency in α1-antitrypsin, and abnormal bone mineral density. Additionally, Onuki et al. described that a history of contralateral PSP was a significant risk factor for postoperative recurrence in patients aged ≤20 years using univariate analysis (17). They evaluated 66 cases, 36 (54.5%) of which had been followed-up for only 1 year. We did not obtain the same result, which may be explained by the small number of cases and relatively short period of follow-up in the study by Onuki et al. (17).

Ethical Statement: The authors are accountable for all aspects of the work in ensuring that questions related to the accuracy or integrity of any part of the work are appropriately investigated and resolved. The Institutional Review Board of Takasago Municipal Hospital approved this study (No. 2018-11), and we obtained informed consent from each patient by optout.