Calcific aortic valve disease (CAVD) is the most common type of valvular heart disease in the elderly (1). Calcific aortic valve stenosis occurred in 2% of people above 65 years old; while the incidence of aortic valve sclerosis, the early stage of CAVD without hemodynamic consequence, was as high as 26% (2). Even without hemodynamically significant obstruction of left ventricular outflow, CAVD still can be an independent risk factor for cardiovascular mortality, all-cause mortality and myocardial infarction (1,3). Currently, the only effective therapeutic option to improve clinical outcomes in CAVD patients is early surgery (4).

Histological studies suggested that the early lesion of CAVD was an active inflammatory process shared some similarities with atherosclerosis, such as lipid deposition, macrophage and T-cell infiltration, and basement membrane disruption (5). While the end-stage of CAVD usually involved heterotopic ossification consisting of mature lamellar bone formation and active bone remodeling (6). Several serum biomarkers such as lipoprotein(a) (2,7), LDL-C (2), and serum phosphate (8) had been found to be associated with the prevalence of CAVD. Various molecular, cellular, and biomechanical mechanisms had been found involved in the progression of CAVD, such as bicuspid aortic valve, osteogenic mechanisms, endocrine mechanisms, dysregulated mineral metabolism, osteoclast deficiency, and developmental signaling (9). Growing evidences suggested that the progression of CAVD was a actively regulated process, which might be suspended or reversed via potential pharmacologic intervention (10). However, thus far, there have been no identified pharmacologic interventions or presumably underlying pathways that affect the CAVD progression process. Besides, the key genes and signaling pathways underlying the progression of CAVD remain poorly understood.

Gene expression microarrays have been widely used to study gene expression profiles in many human diseases, which provide an effective way for studying disease-associated genes and discovering novel therapeutic targets and biomarkers (11). Recently, several studies had compared the mRNA expression profile of CAVD (12,13). However, the results were inconsistent due to small sample size, different technological platforms, different data processing and sample heterogeneity. The disadvantage of these single studies can be overcome by integrated bioinformatics analysis, which combines different microarray dataset to obtain a more steady result (14). MetaDE package developed by Wang et al. contains more than 12 popular genomic meta-analysis methods, which is an effective integrative analysis solution (15).

In the present study, we applied integrated bioinformatics methods to identify key genes and pathways in CAVD. Two microarray profile datasets [GSE51472 (12) and GSE83453 (13)] were downloaded from the Gene Expression Omnibus (GEO) database. Differentially expressed genes (DEGs) were screened using the MetaDE package in R software. Gene ontology (GO) and pathway enrichment analysis of DEGs were then performed. A protein-protein interaction (PPI) network was established, and key genes and pathways associated with CAVD were analyzed.

The probe IDs was converted into international standard names for genes (gene symbol). For multiple probes that mapped to a single gene, interquartile range (IQR) of each probe was calculated with MetaDE.match package in R software, and the probe with largest IQR was selected to represent the expression level of the gene. Next, MetaDE.merge package was used to merge the gene expression profiles to obtain the commonly profiles genes between the two datasets. Finally, either 30% un-expressed genes (small mean intensity) or 30% un-informative genes (small standard deviation) were filtered out by MetaDE.filtering package, and the remaining 7,946 genes were remained for further analysis.

MetaDE package was used to perform the integrate analysis (15). Moderate t test was used to determine the gene expression difference in each dataset, and the maximum P value method (maxP) was used to combine the P values from moderate t test. An adjusted P value of <0.0001, based on the false discovery rate (FDR) using Benjamini-Hochberg method was used to select DEGs.

The STRING database (http://string-db.org/) (18) was used to identify the interactions between proteins encoded by DEGs based on experimental data, databases, text mining, and predictive bioinformatics data. A combined score of >0.4 was set as threshold value. PPI networks were constructed with Cytoscape software (19). The genes with higher degrees of interaction were considered as hub genes, and pathway enrichment analysis was performed for these hub genes. The plug-in Molecular Complex Detection (MCODE) was used to screen the modules of PPI network in Cytoscape software. MCODE score >3 and number of nodes >4 were considered as threshold value. Pathway enrichment analysis were performed for genes in the modules.

Three method were used to detect common DEGs between the two microarray datasets: the maximum P value method (maxP), the Fisher’s method (Fisher), and the adaptive weight method (AW). The detection competency curves (Figure 1) suggested all the three methods were useful to detect common DEGs between the two datasets. The maxP method was chosen in this study. Under the threshold of adjusted P value of <0.0001, 107 DEGs were identified in CAVD. Among the 107 DEGs, 53 were up-regulated genes, and 54 were down-regulated genes (Table 2). Heatmap showed the expression pattern of these DEGs (Figure 2), suggesting the consistency of the 107 DEGs in each dataset. 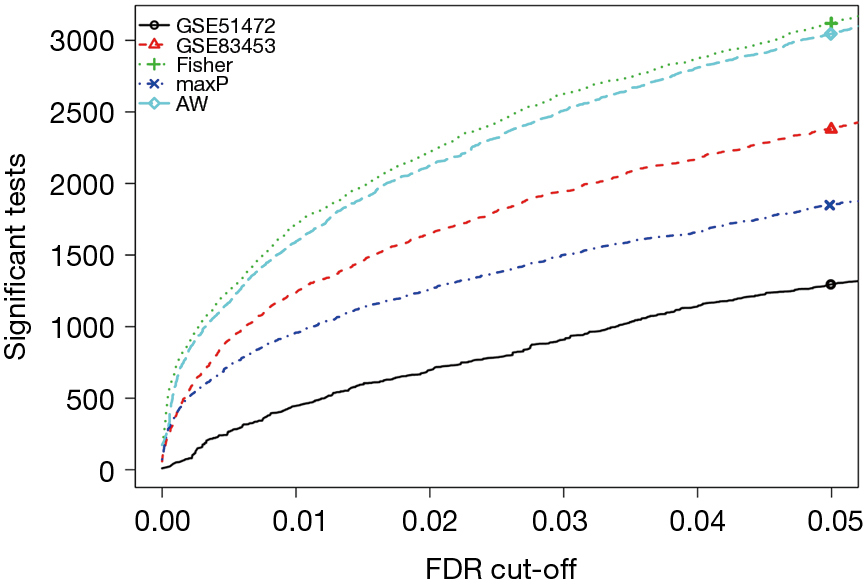 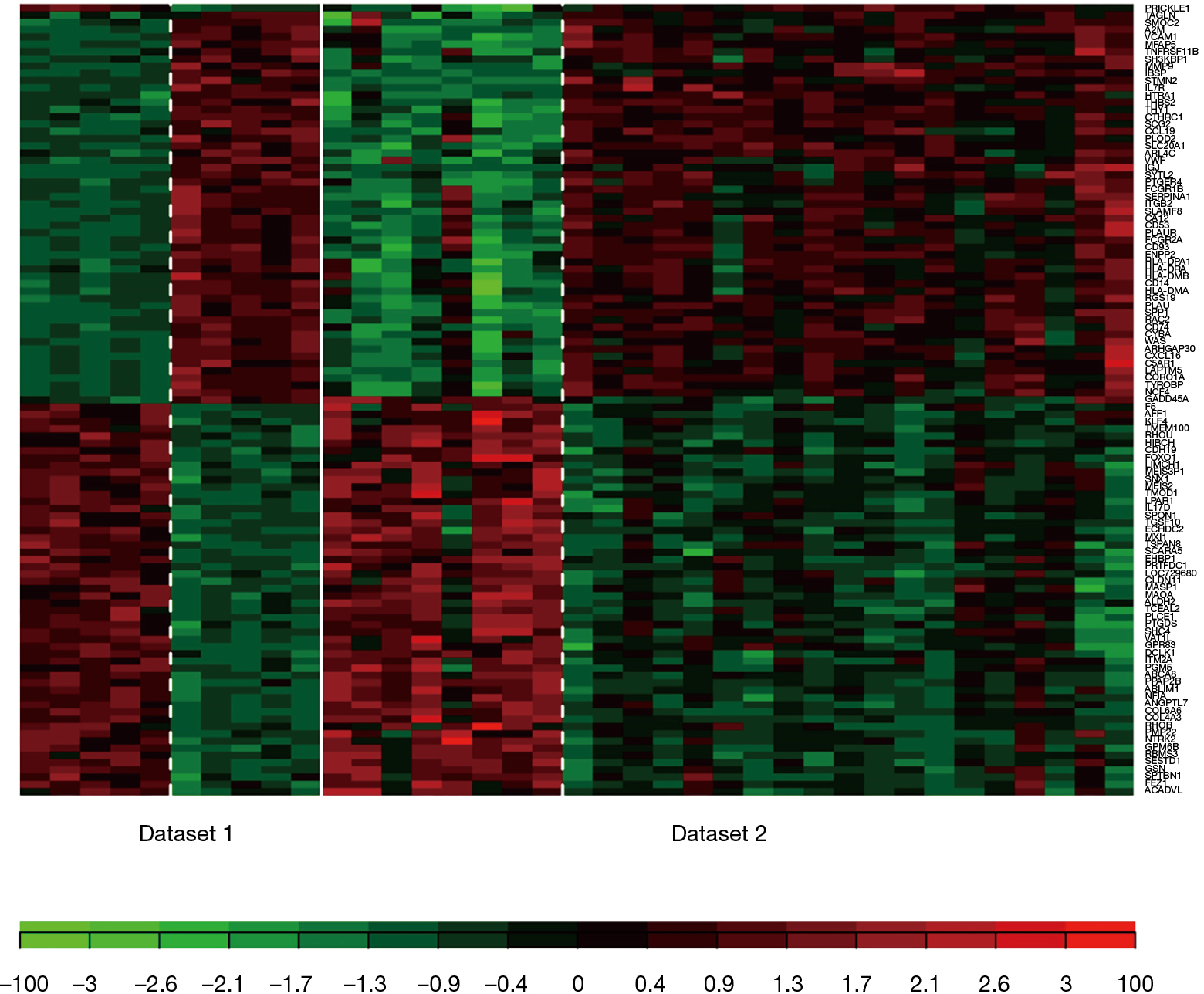 Figure 2 The heatmap of the actual expression profiles for the 53 up- and 54 down-regulated DEGs. The heatmap was generated using MetaDE package in R. The expression profiles greater than the mean are colored in red and those below the mean are colored in green. 0, normal aortic valve; 1, calcified aortic valve; DEG, differentially expressed gene. 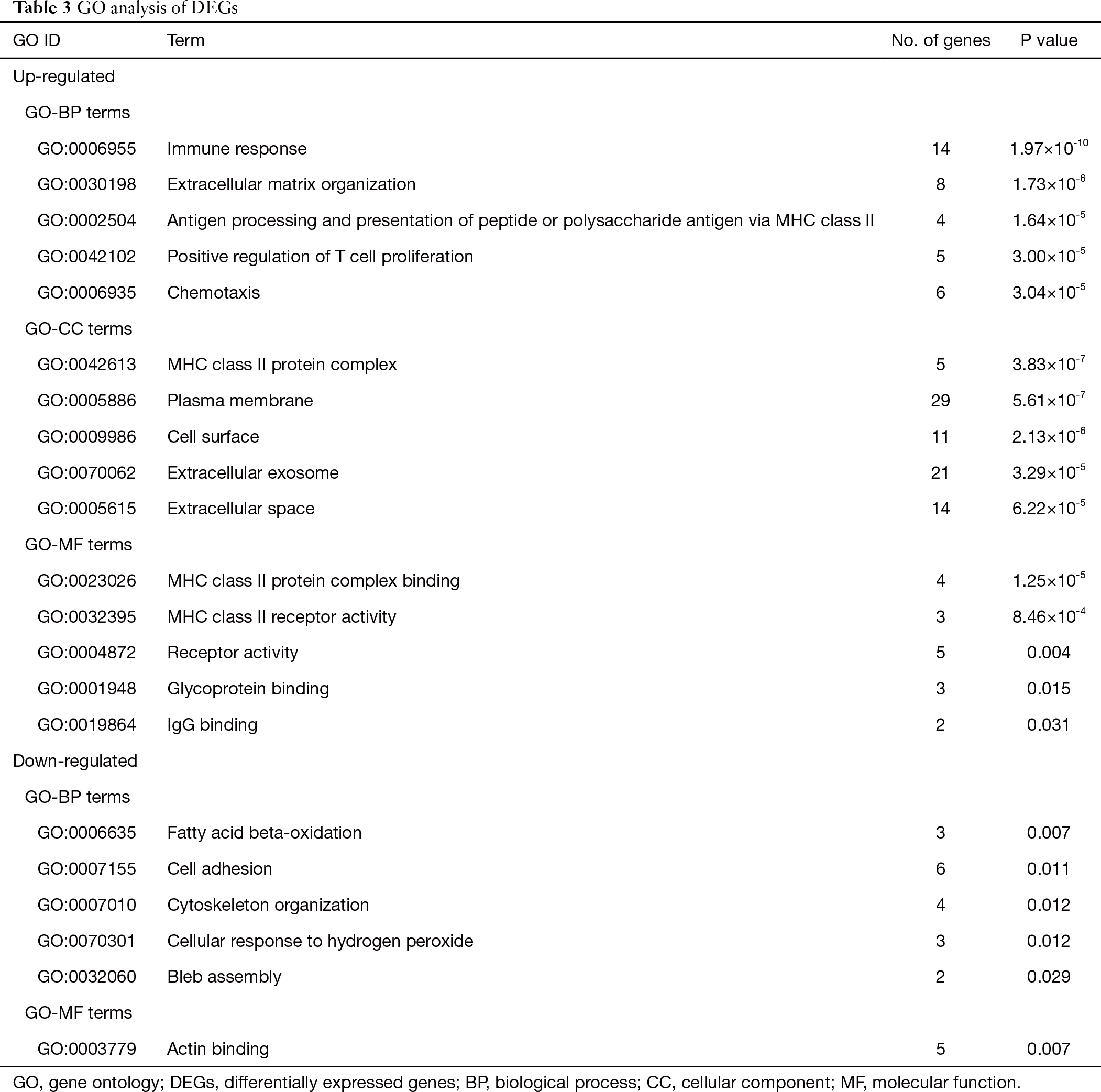 The most significantly enriched pathways of DEGs analyzed by KEGG analysis were listed in Table 4. The up-regulated DEGs were enriched in phagosome, complement and coagulation cascades, leukocyte transendothelial migration, cell adhesion molecules (CAMs), and antigen processing and presentation. It was noteworthy that four HLA molecules (HLA-DRA, HLA-DMA, HLA-DPA1, HLA-DMB) presented in three pathways associated with immune response, while ITGB2 and VCAM1 presented in two pathways associated with cell adhesion and migration. The down-regulated DEGs were enriched in AGE-RAGE signaling pathway, metabolism of amino acid (histidine, beta-Alanine, tryptophan) and fatty acid. ALDH2 presented in metabolism of amino acids and fatty acid. 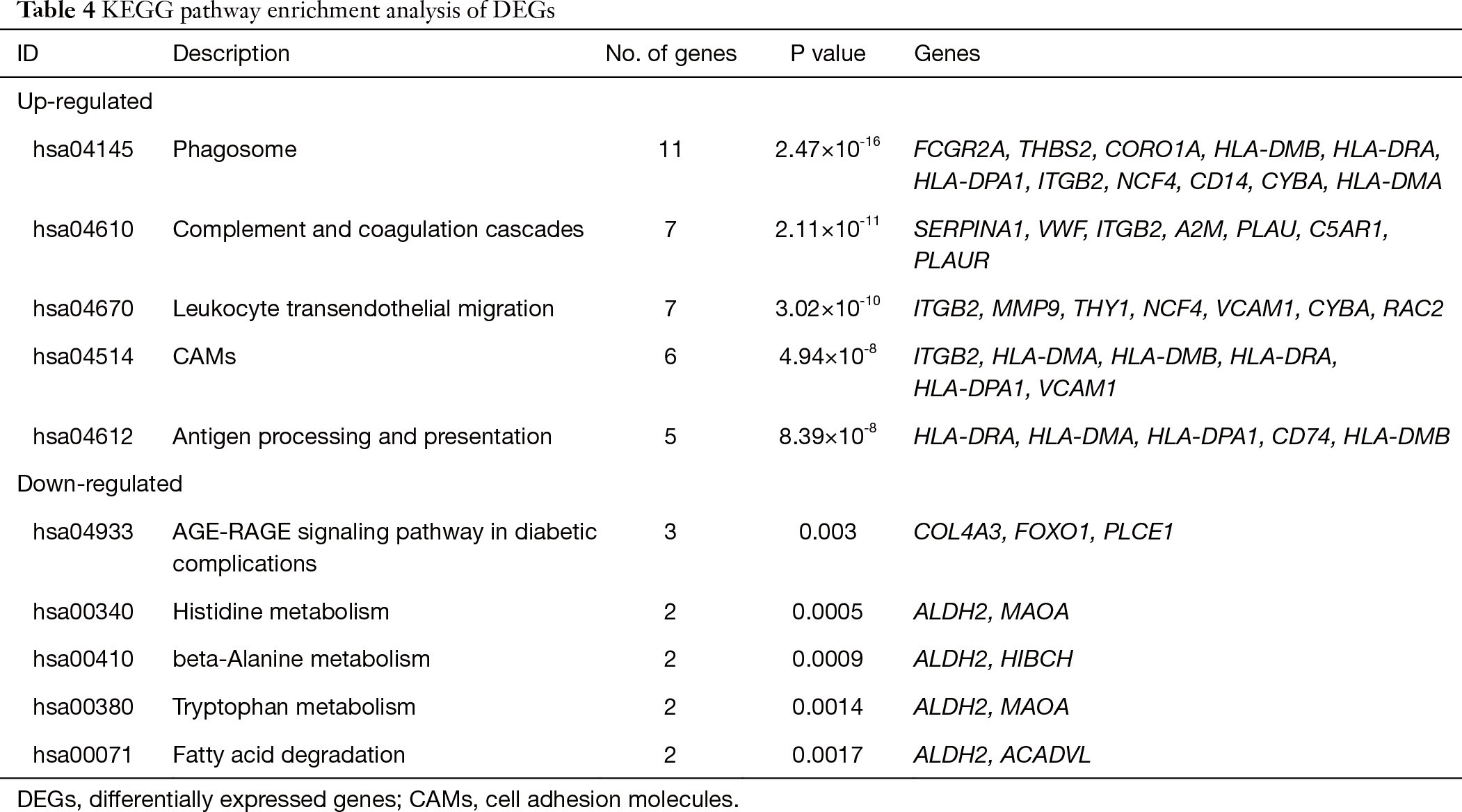 A total of 61 nodes and 143 protein pairs were obtained with a combined score of >0.4 based on the STRING database (Figure 3A). The top 5 hub genes a degree of interaction ≥10 were VCAM1 (degree =16), MMP9 (degree =14), ITGB2 (degree =14), RAC2 (degree =13), and vWF (degree =10). Pathway enrichment analysis suggested that these hub genes mainly involved in leukocyte transendothelial migration and cell adhesion (Figure 3B). MCODE detected a significant protein cluster containing HLA-DPA1, HLA-DRA, HLA-DMA, HLA-DMB, and CD74 (Figure 4A). Pathway enrichment analysis showed that these genes mainly involved in antigen processing and presentation and CAMs (Figure 4B). We also conducted pathway enrichment analysis to the independently down-regulated protein cluster containing ALDH2, HIBCH, ACADVL, ECHDC2, VAT1L, and MAOA (Figure 4C), which suggested that these genes mainly involved in metabolism of fatty acid and various amino acids (Figure 4D). 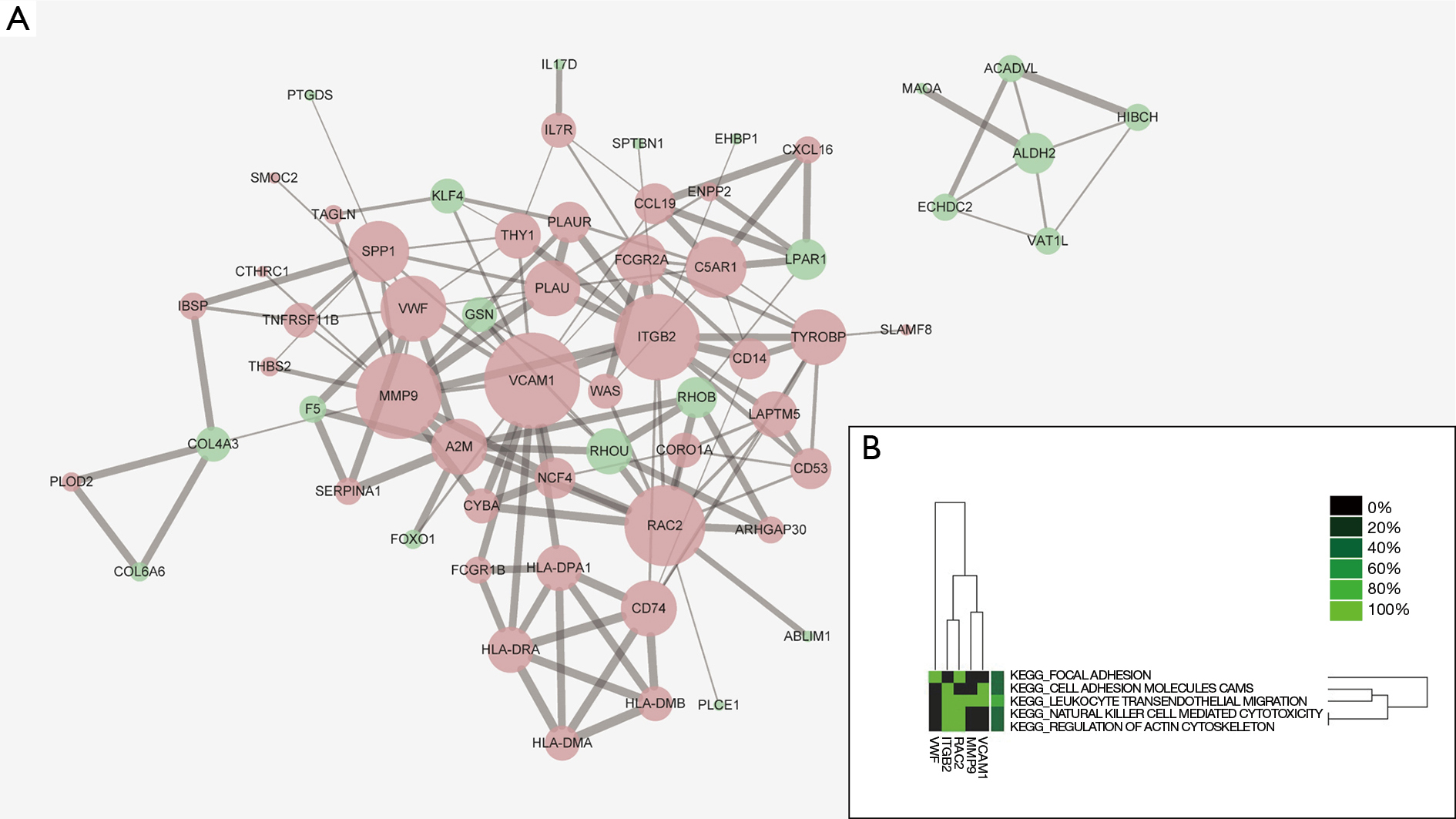 Figure 3 PPI network analysis. (A) Protein-protein interaction network of DEGs. Red nodes represent up-regulated genes and green nodes represent down-regulated genes. The size of each node is positively correlated with the degree of interaction. The width of each edge is positively correlated with the combined score; (B) pathway enrichment analysis of the top 5 hub genes. DEG, differentially expressed gene; PPI, protein-protein interaction. 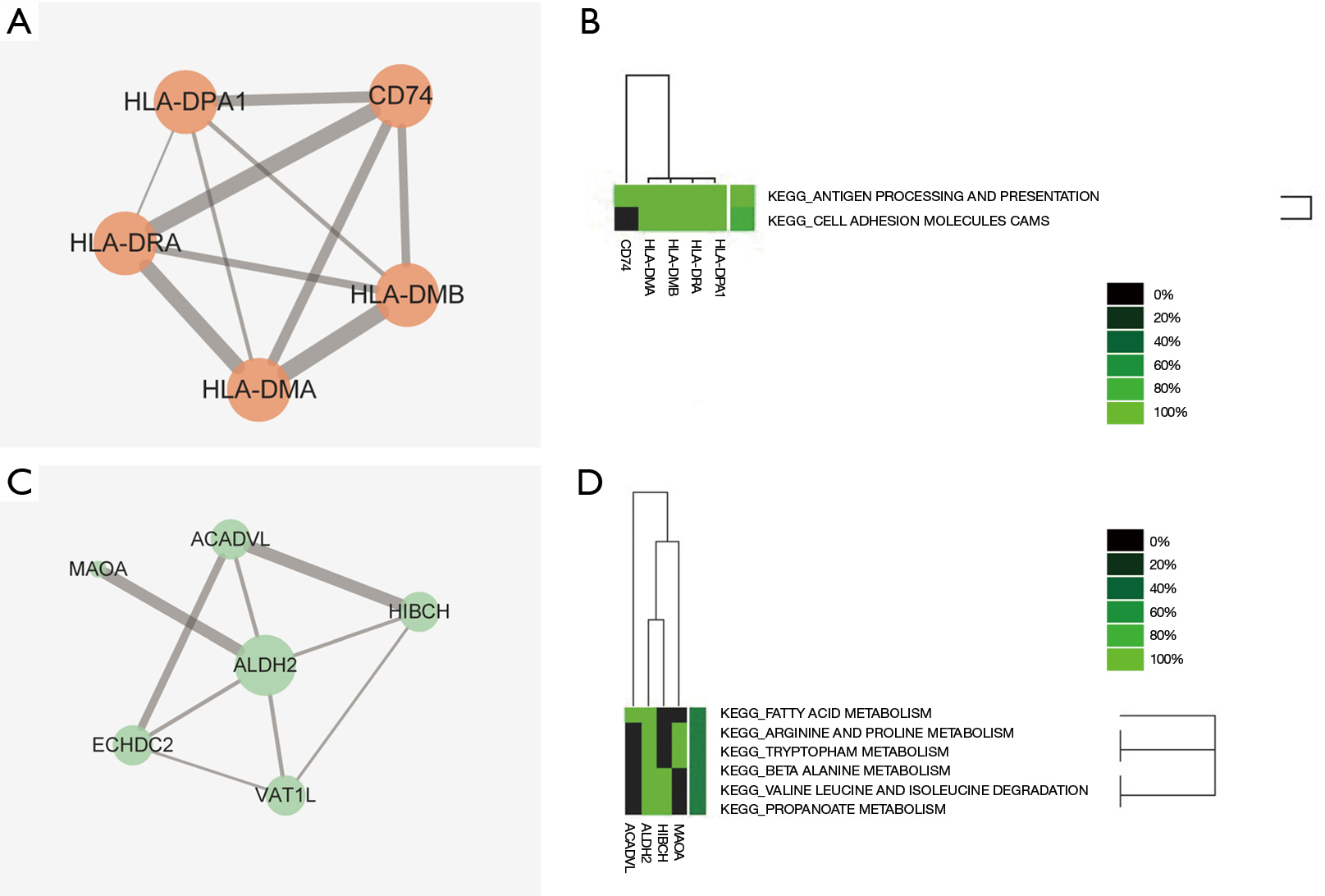 In the present study, a total of 107 DEGs (53 up and 54 down-regulated genes) were identified in CAVD by integrated analysis of microarray datasets (GSE51472 and GSE83453). Further bioinformatics analysis suggested that VCAM1, MMP9, ITGB2, RAC2, and vWF had a high degree of interaction in the PPI network and were key genes in CAVD. These key genes were significantly enriched in pathway of leukocyte transendothelial migration. The gene cluster containing HLA-DPA1, HLA-DRA, HLA-DMA, HLA-DMB, and CD74 detected by MCODE also suggested the role of immune response in CAVD. Moreover, the down-regulated gene ALDH2 might play a protective role in CAVD.

Inflammation is involved in the development and progression of CAVD (20), and calcification of the aortic valve was considered an inflammation-dependent process (21). T lymphocytes (22) and macrophages (5) had been identified in early aortic valve lesions. In the present study, 4 hub genes (VCAM1, MMP9, ITGB2, and RAC2) involved in leukocyte transendothelial migration, which was the first step of the immune cells infiltration. Aortic valve endothelial cells cover the surface of the aortic valve, and provide a protective function on aortic valve (23,24). High expression of VCAM1 had been found in the endothelium of calcified human aortic valves (24). VCAM1 on the endothelial cells are involved in the firm adhesion of leukocytes (25), and it also activates intracellular calcium release and NADPH oxidase Nox2, which further promotes the migration of leukocytes (26). Increase in MMP-9 had been found in aortic stenosis (27). MMP9 is synthesized by macrophages, which regulates the activation of T lymphocytes (28). MMP9 also can regulate leukocyte migration by processing chemokines and cytokines (29). ITGB2 normally expressed only in leukocytes, which promote leukocyte adhesion to endothelium (30). RAC2 is a member of GTPase signaling, which had been proven involved in regulation of leukocyte transendothelial migration (31). However, the role of ITGB2 and RAC2 in CAVD has not been illuminated yet. HLA-DPA1, HLA-DRA, HLA-DMA, HLA-DMB, and CD74 are MHC class II molecules, which mainly expressed in antigen presenting cells such as macrophages and dendritic cells (32). It had been previously reported that the proportion of circulating CD8+ T cell expressing HLA-DR was elevated during CAVD, which suggested that besides leukocytes infiltration of the aortic valve, a systemic adaptive immunity also play a role during CAVD (33).

vWF plays a major role in platelet adhesion and hemostasis (34). An in vitro study conducted by Balaoing et al. showed that vWF stimulated by histamine from porcine aortic valve endothelial cells significantly increased valvular interstitial cell calcification in vitro, which suggested a possible role of vWF in progression of CAVD (35).

ALDH2 is a detoxifying enzyme for the removal of toxic acetaldehyde such as malondialdehyde (MDA) and 4-hydroxynonenal (4-HNE) (36). More than 40% of the East Asians population carries a common ALDH2*2 mutant allele (Glu504Lys), which results in reduction of the enzymatic activity (37). Recently, various studies had highlighted the relationship between ALDH2 and cardiovascular disease. Epidemiological studies suggested that the inactive East-Asian variant of ALDH2 (ALDH2*2) increased the risk of coronary artery disease (38). Animal study suggested that Alda-1, an activator of ALDH2, inhibited atherosclerosis in apolipoprotein E-knockout mice (39). In vitro study also suggested that activation of ALDH2 significantly attenuated the oxygenized LDL induced endoplasmic reticulum stress and apoptosis in smooth muscle cells (40). The present study suggested that the expression of ALDH2 was down-regulated in CAVD, however, the role of ALDH2 in CAVD had not been reported yet. It has been demonstrated that dysregulation of antioxidant mechanisms led to increased oxidative stress, which contributed to the progression of CAVD (41). We speculated that ALDH2-mediated detoxification effect reduced the oxidative stress in aortic valve, which might play a protective role in CAVD.

There are several limitations of the present study. The sample sizes of the microarray datasets used in the integrated analysis were relatively small. Besides, due to the very small sample sizes, subgroup analysis was not able to be performed to distinguish the possible different mechanisms involved between bicuspid and tricuspid valves. Although the integrated bioinformatics approach obtained a steadier result than single microarray, further studies with larger sample sizes covering wider range of races are still needed.

In conclusion, the present study identified VCAM1, MMP9, ITGB2, RAC2, vWF and ALDH2 as key genes in the progression of CAVD by integrated analysis of microarray datasets. Further bioinformatics analysis suggested that immune cells infiltration might play a key role in the progression of CAVD, while ALDH2-mediated detoxification effect might play a protective role in CAVD. The study provides a set of useful targets for further investigation into the molecular mechanisms, biomarkers and treatment targets of CAVD. Further molecular biological experiments are needed to confirm the function of the identified genes associated with CAVD.