Video-assisted thoracoscopic surgery (VATS) lobectomy is now frequently used as the curative surgical approach in patients with non-small cell lung cancer (NSCLC) (1). General thoracic surgeons generally tend to consider that VATS lobectomy must be less invasive than open lobectomy. Many published papers have suggested that VATS lobectomy is an adequate oncological operation, is safe, is better tolerated than open lobectomy, and facilitates the delivery of adjuvant chemotherapy (2-5). Moreover, several multicenter case-control studies have shown that the potential benefits of VATS include less pain, chest drainage, length of hospitalization, and complications (6-9). However, these benefits are not as statistically robust in prospective randomized trials. Moreover, inflammation markers, such as C-reactive protein or erythrocyte sedimentation rate, can be easily affected by other physical factors, therefore they are not always suitable for the evaluation of surgical invasiveness.

Blood coagulation factor XIII (FXIII) is not only a key factor that functions at the end of the coagulation cascade, but it also plays an important role in wound healing, making cross-linking fibrin monomers into stable polymers and counteracting fibrinolytic degradation (10). Administration of exogenous FXIII concentrate reportedly aids wound healing (11-14) and intestinal anastomosis leakage after gastrointestinal surgery (15,16). Moreover, Inoue et al. (17) reported that FXIII was not only an important factor for prolonged air leakage after pulmonary resection but also that exogenous FXIII helped to treat the air leak.

Patients who underwent intraoperative conversion from VATS to open lobectomy were excluded. Patients who received a perioperative transfusion were also excluded because coagulation factors may be strongly affected by transfusion.

The preoperative characteristics were the patient’s age, sex, smoking history, body mass index, preoperative diagnosis and tumor position, various nutrition indexes, and presence of comorbidities. The intraoperative parameters were the surgical procedure, operation time, and blood loss. Intraoperative blood loss was calculated by weighing blood-soaked gauze and measuring the amount of blood in suction bottles. Postoperative complications that occurred within 28 days after surgery were monitored and classified according to the Clavien-Dindo classification of surgical complications (18). The index of prolonged air leakage (IPAL) (19) was also calculated from the patients’ information.

Perioperative antimicrobial prophylaxis was performed immediately before surgery and every 3 to 12 h during and after surgery (the intervals were determined according to the half-lives of the antimicrobials) until 2 days after surgery. No patients underwent postoperative replacement of FXIII, even if prolonged air leakage was found.

All patients underwent lobectomy with mediastinal lymph node dissection. VATS lobectomy was performed entirely through four small incisions that measured 30, 15, 7, and 7 mm, respectively, without rib spreading. A 5-mm high-definition camera (Olympus, Tokyo, Japan) was inserted with 30-degree angulation. The operation was performed entirely through thoracoscopic images. In contrast, open lobectomy involved the performance of lobectomy following thoracotomy with rib spreading. The length of the skin incision was about 120 mm.

Blood samples for analysis were obtained within 1 week before surgery and on postoperative day (POD) 1, POD3, POD5, and POD7. We measured the FXIII activity, fibrinogen level, fibrinogen degradation products (FDP) level, and complete blood count. All laboratory tests were performed according to the manufacturer’s protocol. FXIII activity was measured via the synthetic substrate method (20). All patients’ data were prospectively collected.

Statistical analyses were performed using Prism 8 (GraphPad Software Inc., San Diego, CA, USA). The results were assessed using unpaired or paired two-tailed Student’s t tests. A value of P<0.05 was considered statistically significant. The optimal cutoff values for continuous prognostic indexes were determined with the method established by Budczies et al. (21), described at http://molpath.charite.de/cutoff/. This method fits Cox proportional hazard models to the dichotomized variable and the survival variable. The optimal cutoff is defined as the point with the most significant split. 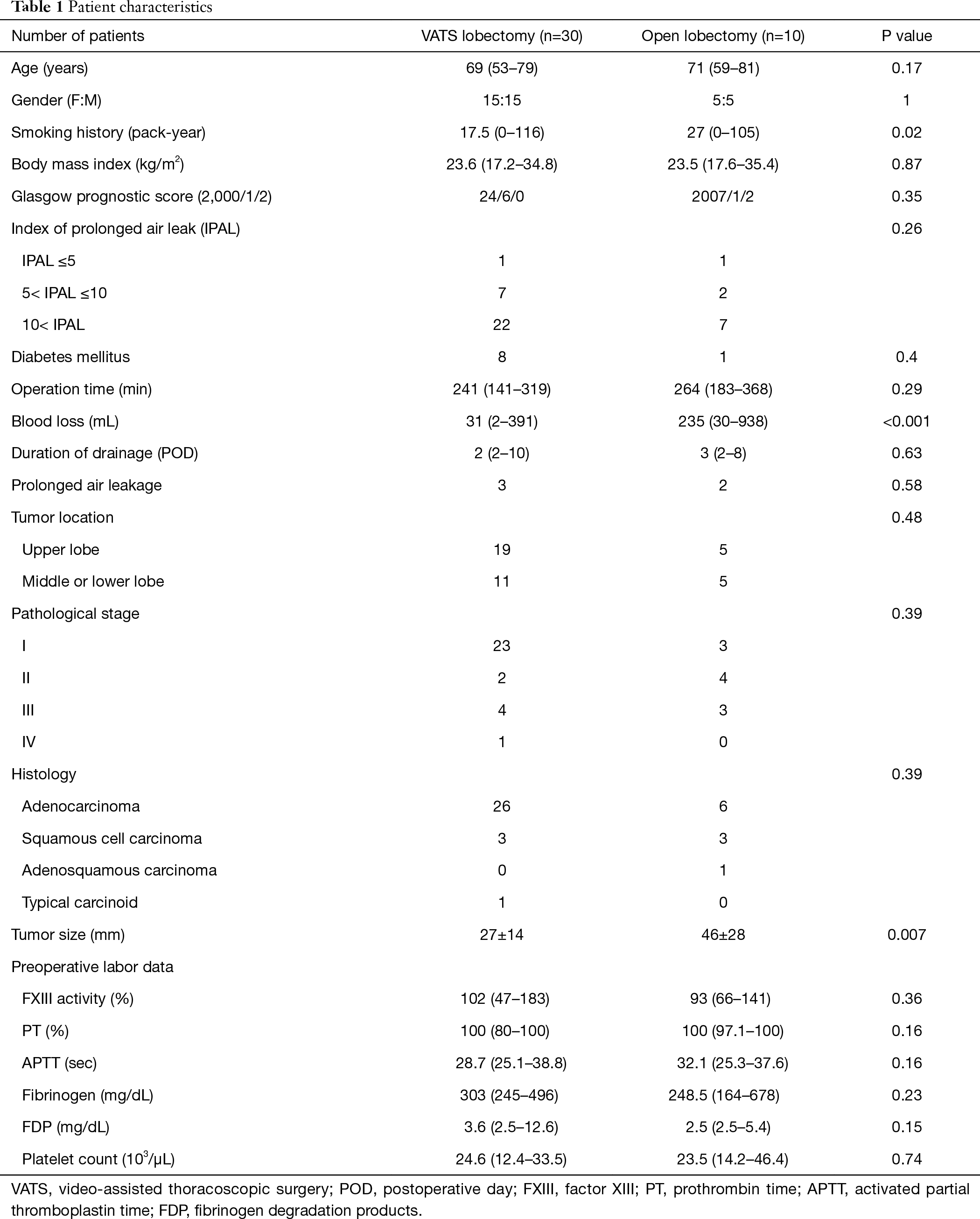 Dynamics of perioperative FXIII activity and other coagulation factors 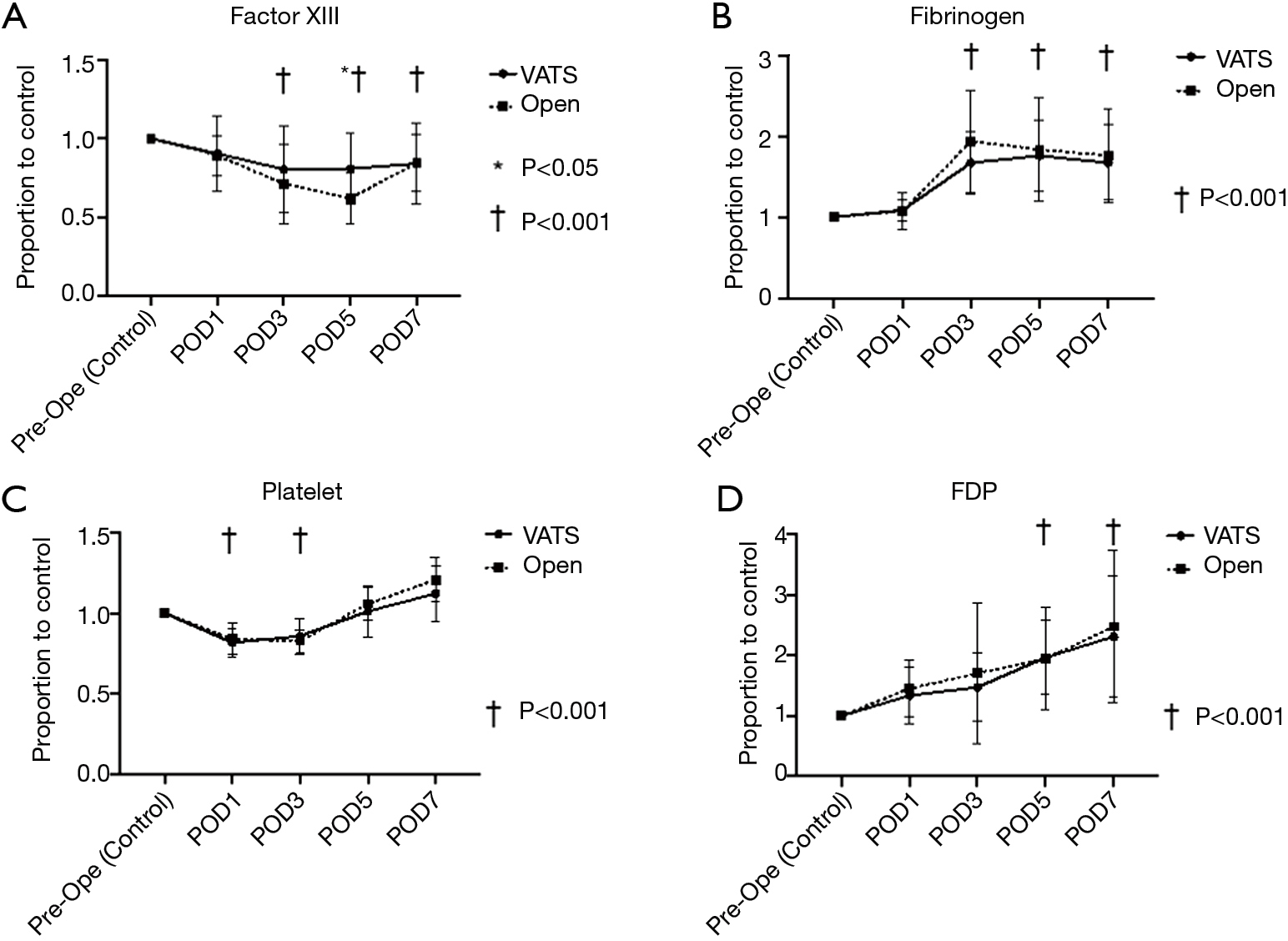 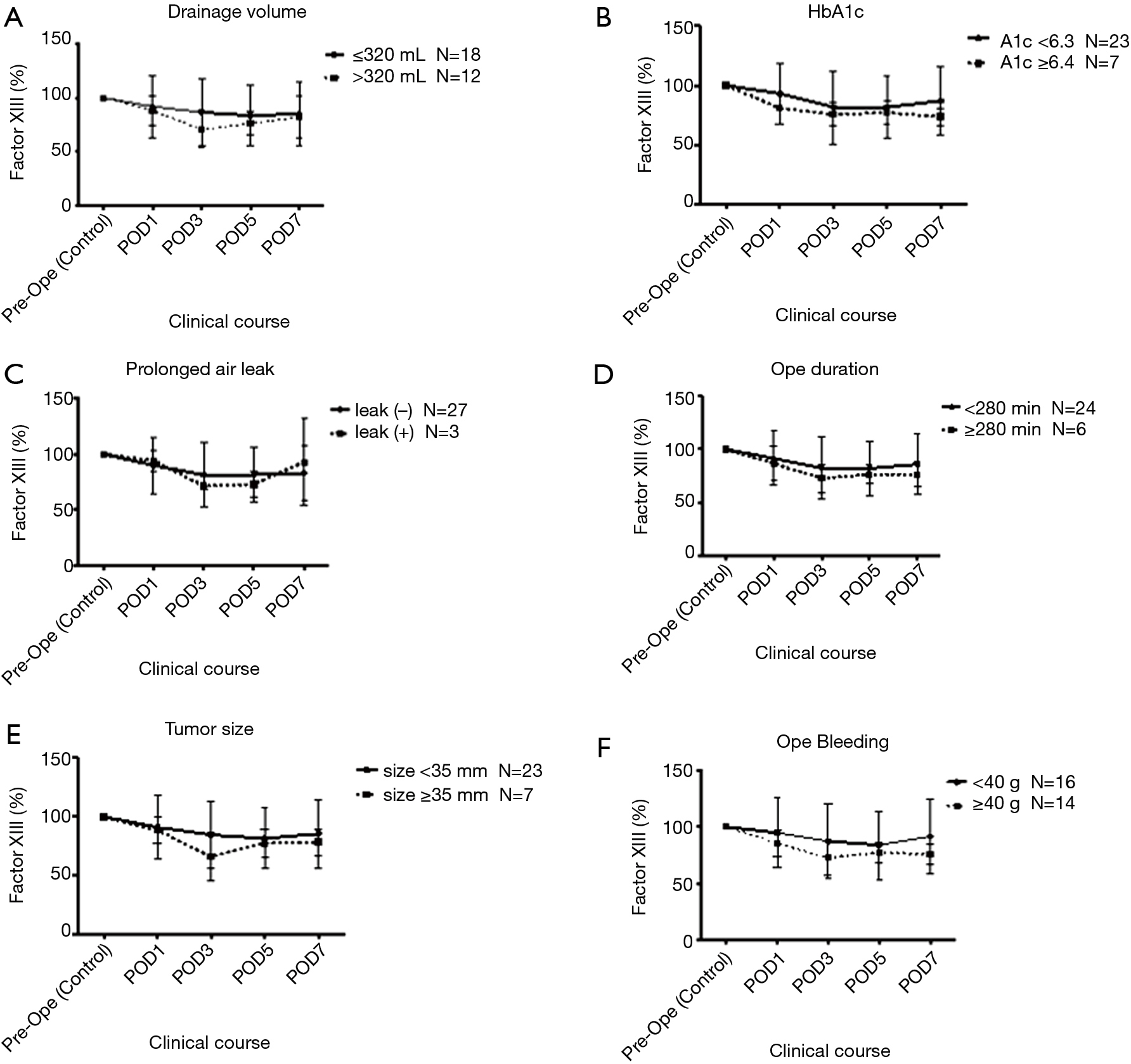 The role of FXIII in wound healing is supported by research in both animal studies and clinical cases. Schroeder and Kohler (22) reported that activated FXIII cross-links fibrin chains in a transglutaminase reaction, leading to a three-dimensional insoluble fibrin network that supports wound healing. Additionally, Higaki et al. (23) reported that the plasma FXIII level was lower in patients with active Crohn’s disease than in patients in remission, indicating FXIII consumption during the healing of damaged colons. Moreover, D’Argenio et al. (24) evaluated patients with ulcerative colitis and found that FXIII was localized in the extracellular matrix of the damaged mucosa as revealed by immunohistochemistry, which is strong evidence of the participation of FXIII in the wound healing process.

How to supply FXIII to the healing tissue remains unresolved. Katona et al. (25) examined children with chronic bronchoalveolar inflammation and found that the plasma type FXIII level in bronchoalveolar lavage fluid was elevated, as was the cellular form of FXIII. From this point of view, the consumption of FXIII in our study may reflect the result of FXIII translocation in the healing tissue. Therefore, our findings suggest that FXIII activity may reflect the difference in surgical invasiveness between VATS lobectomy and open lobectomy.

FXIII also interacts with cells of the immune system (26). Interactions include activation of FXIII by human neutrophil elastase, down-regulation of activated FXIII within the clot by granulocyte proteases, and FXIII-induced enhancement of monocyte proliferation and migration and inhibition of monocyte apoptosis (26). Monocytes and macrophages have been discussed as a source of FXIII-A in plasma, and in spite of some evidence for a non-classic secretion pathway of cellular FXIII from these cells (26,27), the origin of plasma FXIII-A is not yet proven. An association between the FXIIIVal34Leu polymorphism and monocyte and neutrophil cell counts after lipopolysaccharide infusions in humans has been suggested (28). VATS lobectomy for early-stage NSCLC has been found to be less immunosuppressive than open lobectomy as shown by less severely suppressed numbers of lymphocytes, total T cells, CD4 T cells, and NK cells in the early postoperative period (29,30).

From these previous papers and our results, the maintenance of FXIII activity may be the result of the less invasive nature of VATS lobectomy. However, this may also result in the prevention of immunosuppression after surgery, which may contribute to better perioperative outcomes.

This study has several potential limitations. First, the number of enrolled patients was small. Additionally, the study was open-label and non-randomized; therefore, it is hard to know if this trend will be a true finding, because sampling bias may have occurred. In order to prove this trend statistically, randomized study with more patients will be required. Second, we described all coagulation factor data as proportions to the preoperative data; therefore, patients with poor coagulation factors tended to show drastic changes, even if the same amount of coagulation factors was consumed. However, the preoperative data of these patients showed wide variation, and proportion data are thus suitable for the comparison between the preoperative and postoperative periods.

We thank Angela Morben, DVM, ELS, from Edanz Group (www.edanzediting.com/ac), for editing a draft of this manuscript. A research fund from the Teikyo University School of Medicine supported this study.

Ethical Statement: The authors are accountable for all aspects of the work in ensuring that questions related to the accuracy or integrity of any part of the work are appropriately investigated and resolved. This study was approved by the ethics review board of Teikyo University (approval number: 17-035).