The expression of Nesprin-1 increased in aortic dissection: why?

Aortic dissection (AD) is a serious disease; its pathogenesis is unknown, and there is a lack of targeted treatment for AD. These factors restrict the therapeutic effect. Relevant studies have shown that Nesprin-1 plays an important role in maintaining nuclear membrane stability, chromatin recombination, proliferation, and differentiation of cells (1-3). In this study, we investigated the expression of Nesprin-1 in AD, in order to find a possible target for the treatment of AD.

Apolipoprotein E homozygous negative (ApoE−/−) mice, provided by the Animal Laboratory Center of the Medical College of Shanghai, Jiaotong University. ApoE−/− mice are deficient in ApoE, and the ApoE−/− mouse is a hyperlipidemic mouse strain based on a C57BL/6 mouse background. Angiotensin II (AngII) infusion is the most common abdominal aortic aneurysm (AAA) model used in mice (4-6). This research was approved by the ethics committee of Shanghai Jiaotong University (syxk2017-0121).

Blood and aortic specimens were collected from six AD patients during AD surgery for the study in total. Samples of perforated aorta from patients with coronary heart disease were collected whilst undergoing proximal anastomosis when performing a graft for coronary artery bypass. Tissue from these patients served as controls. Informed written consents were obtained from the families of the patients. The studies involving human samples were approved by the Ethics Committee of Ren Ji Hospital, School of Medicine, Shanghai Jiao Tong University [No. (2018)31K], and conformed to the principles outlined in the Declaration of Helsinki.

After the patient samples were processed, 300 µL of the resultant tissue cell lysate were removed and mixed with gun to complete the lysis. Thereafter the lysate was transferred to a clean centrifuge tube, and 10 µL of sample was added to 10 µL of 2× SDS-PAGE loading buffer. The sample and buffer were mixed, heated for 5 minutes at 100 °C, cooled on ice and centrifuged for 5 minutes at to remove insoluble precipitation. The supernatant (20 µL of each sample) was loaded into each well of a 10% SDS-PAGE gel, and the proteins were separated. Following electrophoresis, a PVDF membrane was soaked in methanol for 1 minute, then soaked in transfer buffer, filter paper and PVDF film soaked in methanol for 4 minutes for 10 minutes, then the transfer sandwich was prepared. A semi-dry cell was used for semi-dry electrophoretic transfer at 30 mA for 50 minutes. Blocking buffer was used to seal the transfer film 4 unitary C overnight, and 1× TBST was used to wash the membrane three times the next day for 15 minutes each time. The membrane was incubated for 2 hours with diluted primary antibody . Thereafter the membrane was washed four times with 1× TBST for 10 minutes each time and the diluted secondary antibody was added and incubated for 2 hours. The membrane was washed four times with 1× TBST for 10 minutes each time. Super-GL ECL supersensitive luminescent reagent was used for chemiluminescence detection and X-ray exposure. After fixing, the air-dried film was photographed with a gel imaging analysis system and analyzed using Gel-Pro Analyzer version 4.0 software (Media Cybernetics, Inc., Rockville, MD, USA).

Total RNA reverse transcription and RT-PCR: RNA reverse transcription, real-time PCR: a two-step method with GAPDH as the normalization gene: primer 5 software was used to design the primers, and they were then synthesized by Abbott biological design. Relative quantification was used in statistical analysis. Relative expression was calculated by RQ =2-Delta CT. Excel software was used for data analysis and for drawing the graphs.

Western blot was used to detect the expression of Nesprin-1 in AD patients and in a non-AD control group with heart disease. This finding was confirmed by immunoblotting (P<0.05) as demonstrated in Figure 1.

Figure 1 WB detected the expression of Nesprin-1 in AD patients and normal control group. We collected aortic tissues of AD patients and found that the expression of Nesprin-1 increased in AD patients by immunoblotting, with statistical difference. It was confirmed in AD that the increasing trend of Nesprin-1 expression indicates that Nesprin-1 protein is involved in the pathogenesis of AD. This result is of great significance. Nesprin-1 has nuclear membrane and organelles, and plays a key role in mitosis, stabilization of nuclear membrane, chromatin recombination and separation, and RNA replication and translocation of adult cells. The change of protein level lays a solid foundation for functional realization.

The expression of Nesprin-1 in tissues from AD patients was statistically higher than that of the control group (P<0.05). These findings suggest that Nesprin-1 may be involved in AD at a transcriptional level (Figure 2). 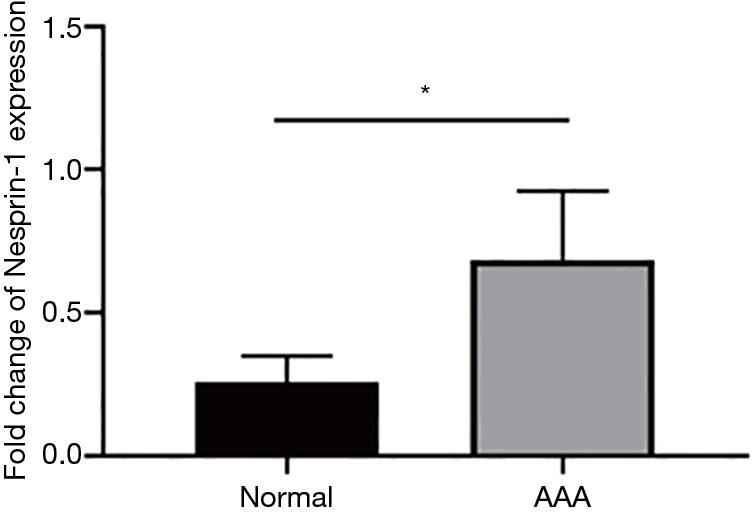 An AD animal model was successfully established by continuous injection of Ang II into ApoE−/− mice by using a subcutaneously embedded micropump (Figure 3). 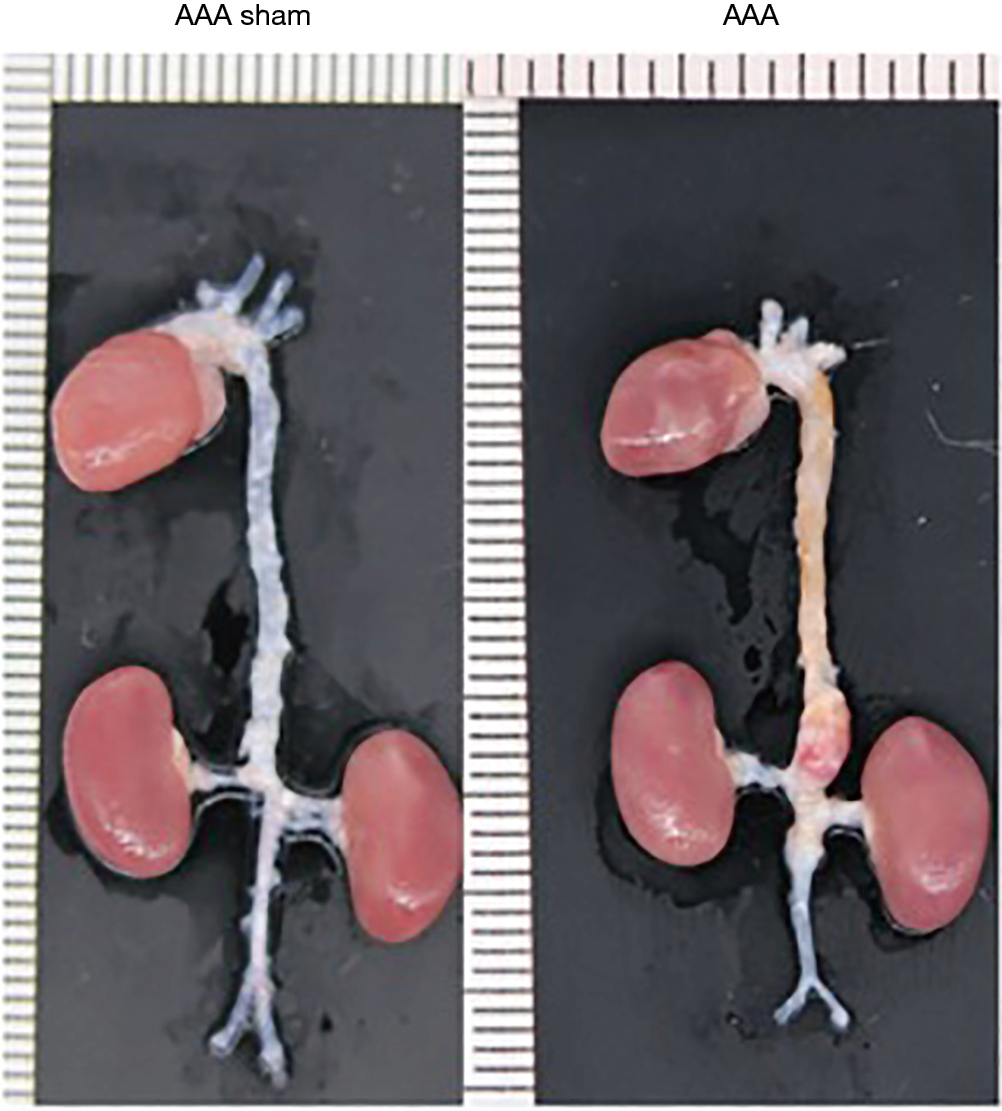 Figure 3 The AD animal model was successfully established by continuous injection of Ang II into ApoE−/− mice through subcutaneous embedding micropump. Animal models play an important role in the study of AD mechanism. 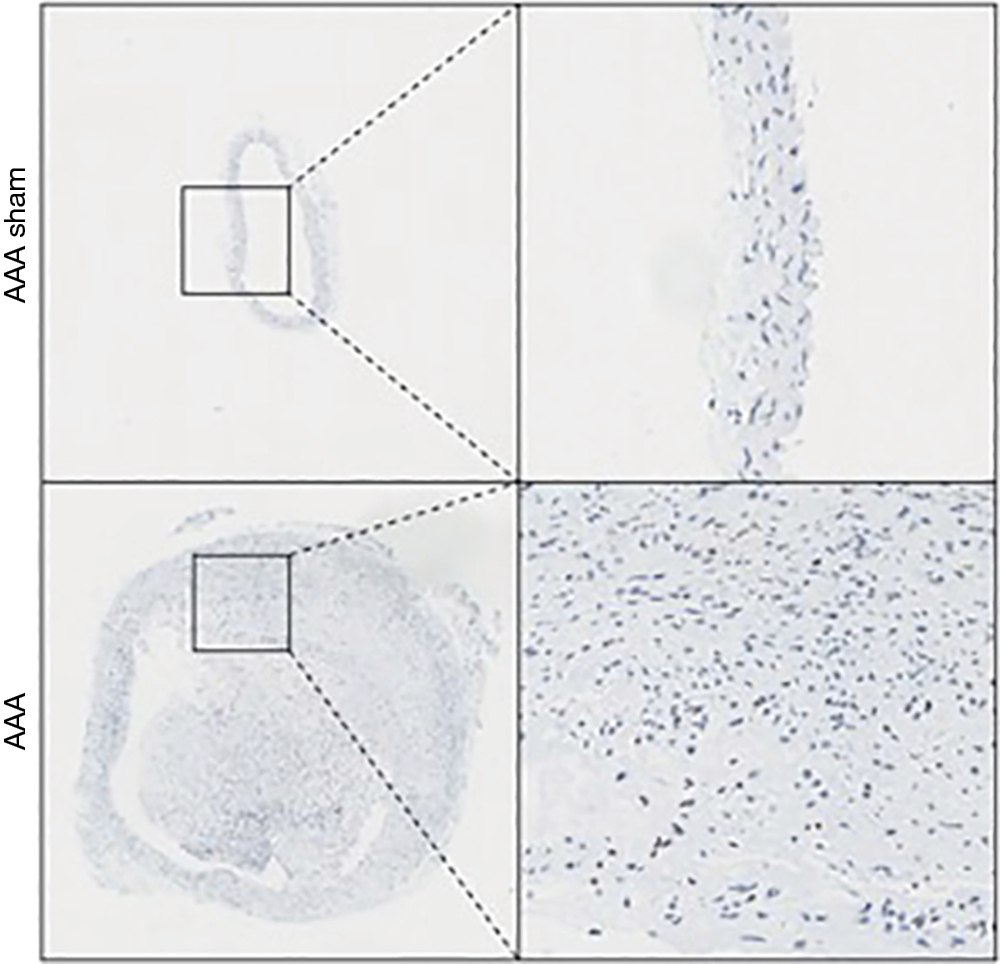 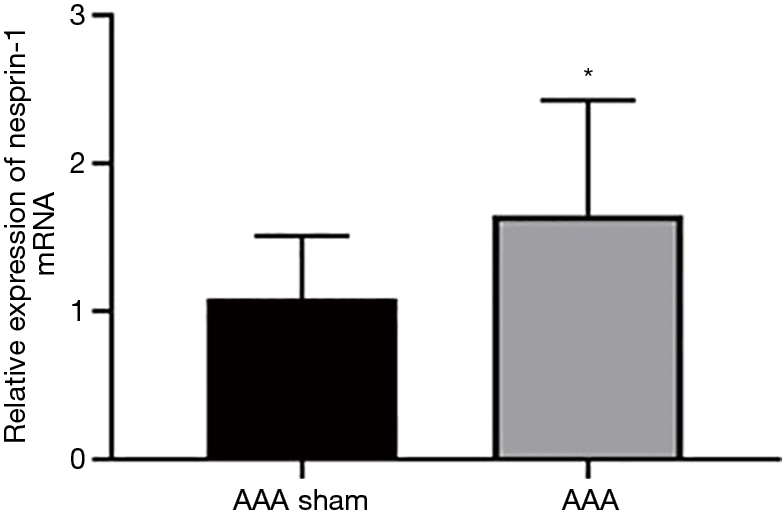 AD is a serious disease with a high mortality rate (7). At the onset of the disease, the blood in the aortic cavity enters the media from the intimal fissure, which separates the media and expands along the long axis of the aorta, forming the separation state of the aortic wall. Acute AD manifests as an intimal tear, with blood entering the denatured elastic media, resulting in a loss of smooth muscle cells. This results in endometrial hyperplasia, apoptosis of smooth muscle cells and rupture of elastic fibers in aorta of patients with chronic AD. Many cytokines, proteases and related signaling pathways are involved in the occurrence of AD, and the absence of TGF-beta leads to the enhancement of the inflammatory response pathways (8). Hypertension is an important risk factor for AD. The study of chronic hypertension in an animal model found that the blood flow of aortic trophoblast decreased, which led to the abnormal morphology of elastin and collagen fibers in the adventitia, necrosis of the media and vascular degeneration (9), and ultimately it promoted the occurrence of AD (10). We successfully established an AD animal model by continuous injection of Ang II into ApoE−/− mice by using a subcutaneously embedded micropump.

Nesprin-1 is expressed in human tissues and organs, particularly in the spleen, peripheral blood leukocytes and heart. Overexpression of Nesprin-1 results in morphological changes in the Golgi apparatus and Nesprin-1 is important for the maintaining Golgi structure. Stability plays an important role in the Golgi bodies. Nesprin-1 plays a role in the transport of substances in Golgi and endoplasmic reticulum (11). The KASH (Klarsicht/ANC-1/Syne homologue) region in Nesprins-1 interacts with SUN-1domain in the intercellular space of the cell membrane. At the same time, the KASH region of proteins in the perinuclear space interacts with the SUN region to form a LINC complex, which exists between the nucleus and the cytoskeleton. Through the bridging of the LINC (Nucleoskeleton-and-Cytoskeleton) complex and cytoskeleton actin, the mechanism of maintaining the nuclear membrane is preserved (1). Experiments also showed that Nesprin-1 protein was linked to F-actin (2,3), and played a role in nuclear separation and migration (2,12). Nesprin-1 protein binds to actin in the nucleus of adult cells, participates in the modification process of actin, plays an important role in the nuclear membrane, and participates in the transcriptional control of chromatin remodeling (13,14). Nesprin-1 transfers from the nucleus and nuclear membrane to the cytoplasm and sarcomere during the differentiation of C2C12 muscle cells into myotubes, suggesting that Nesprin-1 plays an important and unique role in muscle differentiation.

In this study, we found that the expression of Nesprin-1 was elevated in AD patients and in the aorta of AD mice. This led us to investigate whether there was a change in Nesprin-1 protein expression. Previously, we mentioned that hypertension is an important cause of AD, but not all patients with hypertension suffer from AD. It is speculated that the effect of hypertension on the aortic wall disturbs the stability of the cells. In order to maintain the stability of the cell skeleton, cells secrete a large amount of Nesprin-1 to maintain the rigid structure. If the rigid structure cannot be maintained, the cells and the cell junctions will rupture, resulting in endovascular rupture of AD. For this reason, we investigated the change in expression of Nesprin-1 in patient specimens and in an animal model, and found the expression to be increased.

Nesprin-1 may be a target for predicting the occurrence and guiding the treatment of AD. This study lays a solid foundation for further research on its downstream mechanisms and treatment directions. In this study, we established an AD animal model to strengthen our conclusions. We have verified the consistency between the findings from AD in humans and in an AD mouse model. The establishment of the AD mouse model will provide an opportunity for further studies for investigating the mechanism of Nesprin-1 activity on the formation of aortic aneurysm, and provide a theoretical basis for the clinical intervention of aortic aneurysm and AD.

Funding: This study was supported by a grant from the Wu Jieping Medical Fund, China (No. 320.6750.17557) and the Shenkang specialty disease clinical “five new” transformation project (16CR3086B).

Ethical Statement: The authors are accountable for all aspects of the work in ensuring that questions related to the accuracy or integrity of any part of the work are appropriately investigated and resolved. The institutional review board of Ren Ji Hospital, Shanghai Jiao Tong University School of Medicine, approved the use of a prospectively maintained database of patients with symptomatic AD and non-AD patients with coronary heart disease for this study [No. (2018)31K].