Papillary thyroid carcinoma (PTC) is the most common type of thyroid cancer and accounts for approximately 80–85% of malignant neoplasms of the thyroid gland (1,2). There are many factors could underlie the prognosis of PTC including patient age, gender, tumor size, histological findings, extrathyroidal extension (ETE), clinical lymph node metastasis (LNM) and remote metastasis (3). BRAF V600E mutation was proved to be associated with thyroid cancer through up regulation of cell division and proliferation leading to tumor genesis (4,5). Furthermore, it was suggested that PTC harboring an activated BRAF mutation might have a more aggressive behavior like ETE, LNM, distant metastasis, advanced TNM stages, and cancer recurrence (6,7). Previous studies have established a statistically significant association between the BRAF mutation and tumor size, advanced clinical stage, multifocality, LNM, ETE, and recurrence in PTC (8-10).

Fine-needle aspiration (FNA) is a first line diagnostic method for thyroid nodules. For the mutation test, cytologic samples from FNA are commonly used. The remaining materials from the needle after FNA are proved to be sufficient cellular material for the BRAF mutation test (11). However, some cytologic results such as non-diagnostic, indeterminate, false-negative, and false-positive results confuse the clinicians (12). Contrast-enhanced ultrasound (CEUS) is adjunct ultrasound (US) imaging technique that is used to differentiate benign from malignant thyroid nodules. Recently, some prospective studies have confirmed the high predictive value of CEUS in identifying malignancy (13-15). According to these results, we aimed to systematically review the relation between the BRAF mutation and the characteristics on CEUS. To the best of our knowledge, no design in this topic was reported.

This study was approved by the institutional review board at the Second Affiliated Hospital Zhejiang University School of Medicine and waived the need for informed consent based on the retrospective design. We reviewed the medical records of 1,315 cytopathologically-proven, conventional PTC patients who had undergone fine needle aspiration (FNA) from January 2016 to March 2018.

US, CEUS and FNA

Ultrasound guided FNAs were performed by the same radiologists with at least 5 years of experience in thyroid nodule FNA. Each nodule underwent FNA without suction with the freehand technique. At least four needle passes were required in order to obtain adequate specimens. The number of needle passes depended on the quality of slides assessed by pathologist immediately. Samples obtained with 23-gauge needles were expelled on glass slides, smeared, and placed immediately in 95% ethyl alcohol for Papanicolaou staining. The remaining materials were rinsed in saline for cell-block processing. Samples obtained from the other passages were assessed for molecular testing.

The FNA specimens were microscopically examined by an experienced pathologist. To distinguish bilaterality from multiplicity, we defined multiplicity as more than two lesions of conventional PTC in one lobe, regardless of the presence of bilaterality.

BRAF mutation analysis was performed at the Molecular Diagnostics Laboratory of the Second Affiliated Hospital Zhejiang University School of Medicine. DNA samples for molecular analysis were extracted from FNA specimens. Based on the BRAF sequence, the PCR primers were designed, including forward primer (5'-TCATAATGCTTGCTCTGATAGGA-3') and reverse primer (5'-GGCCAAAAATTTAATCAGTGGA-3'). The detection kits were provided by Amoy Diagnostics Co., Ltd. The sequencing of PCR products was performed using a LightCycler 480 II (Roche Diagnostics, Germany) after DNA extraction and PCR amplification. The Cycle threshold (Ct) value was also obtained. The Ct value of sample less than 28 was defined as positive, while equal to or greater than 28 was negative. And the amplification curve was also assessed to estimate the amplification signal.

The SPSS for Windows version 13.0 software package (SPSS Inc., Chicago, IL) was used for statistical data analysis. Continuous data are presented as mean (standard deviation) and compared by using Student’s t test. Categorical data are presented as percentages and compared using the Chi-square test and the Pearson chi-squared test. The rankings of valuable indicators were compared according to the odds ratios (ORs). All risk ultrasound features that proved to be statistically significant on Chi-square test were analyzed to assess independent association with BRAF mutations using multivariate logistic regression. 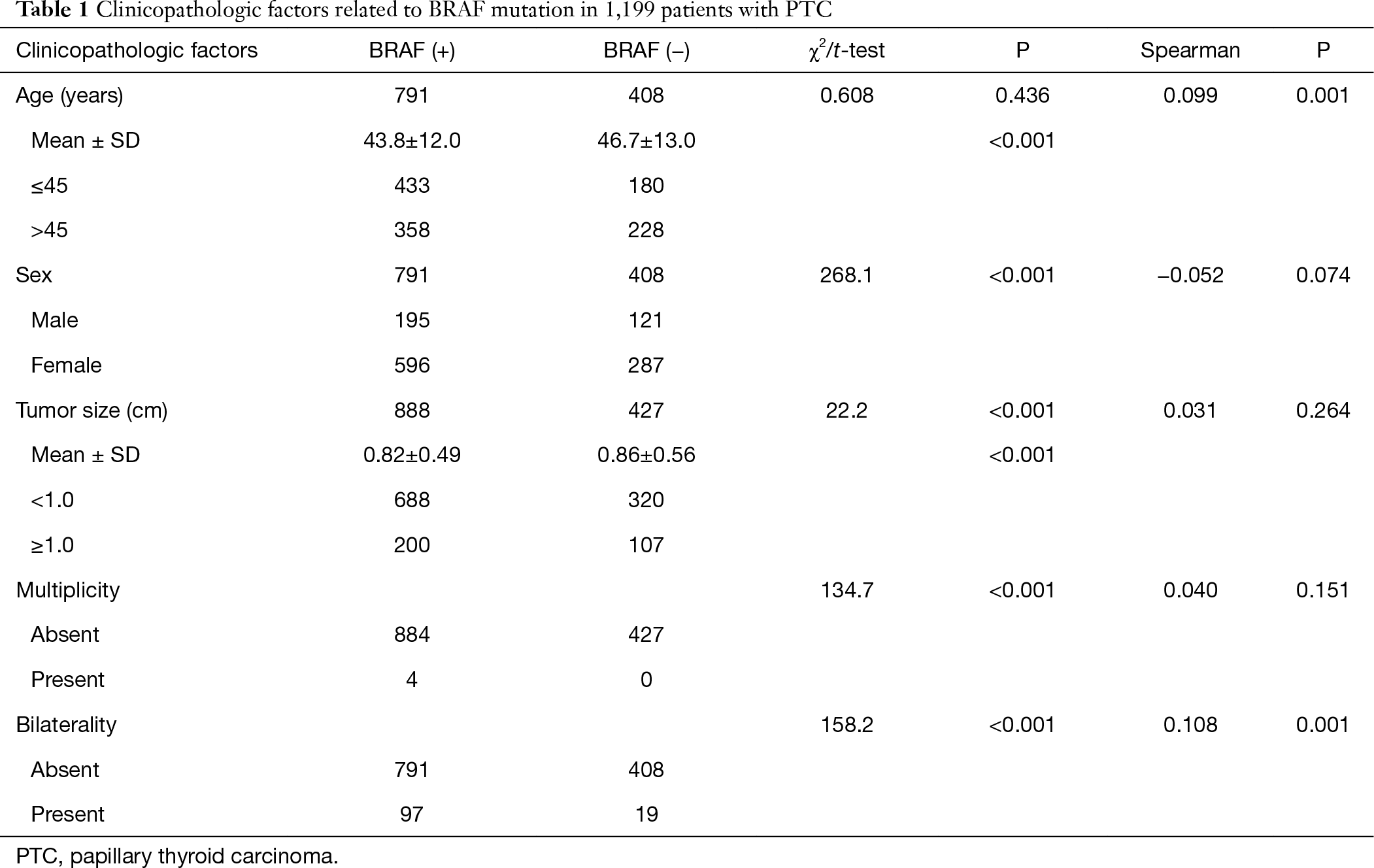 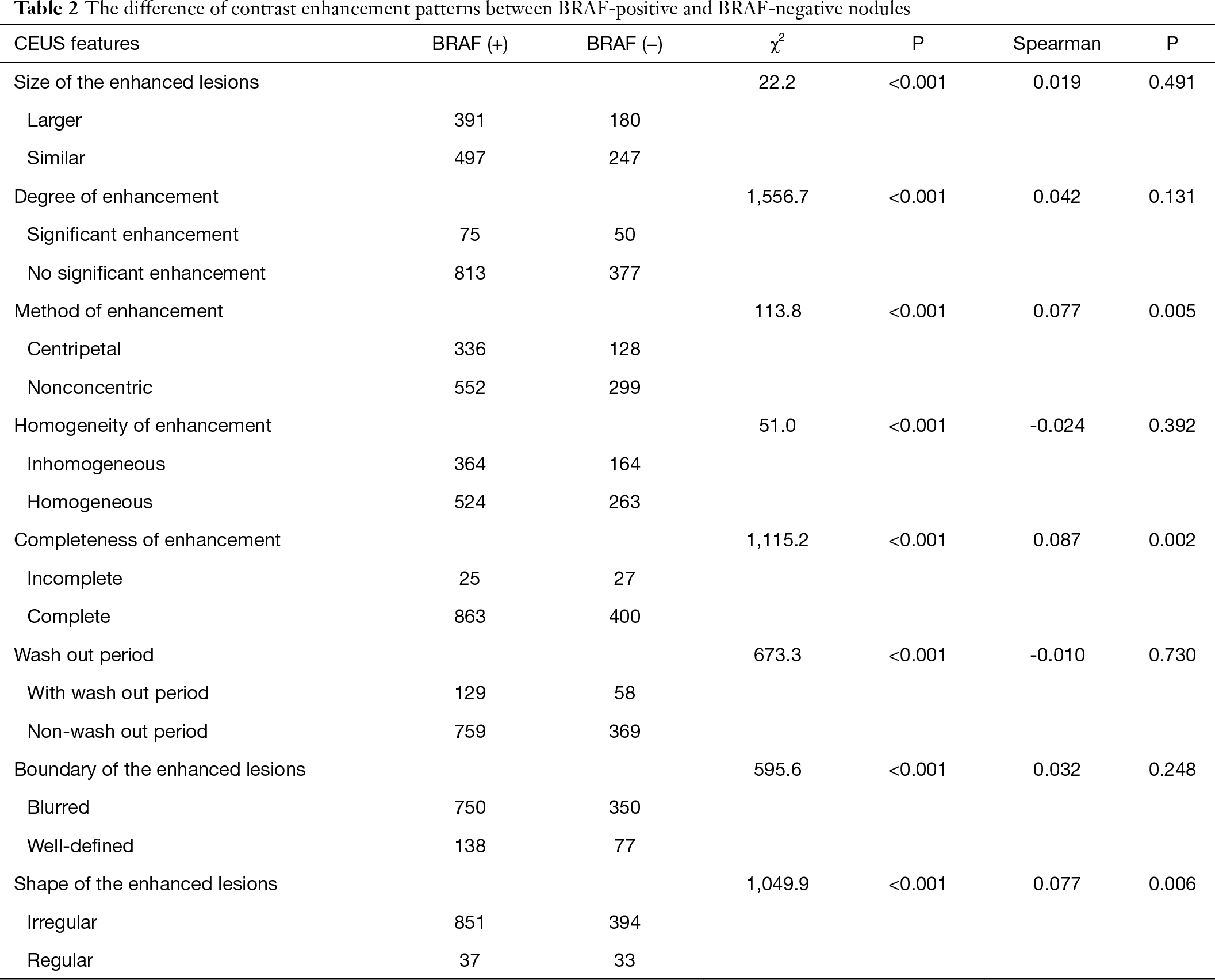 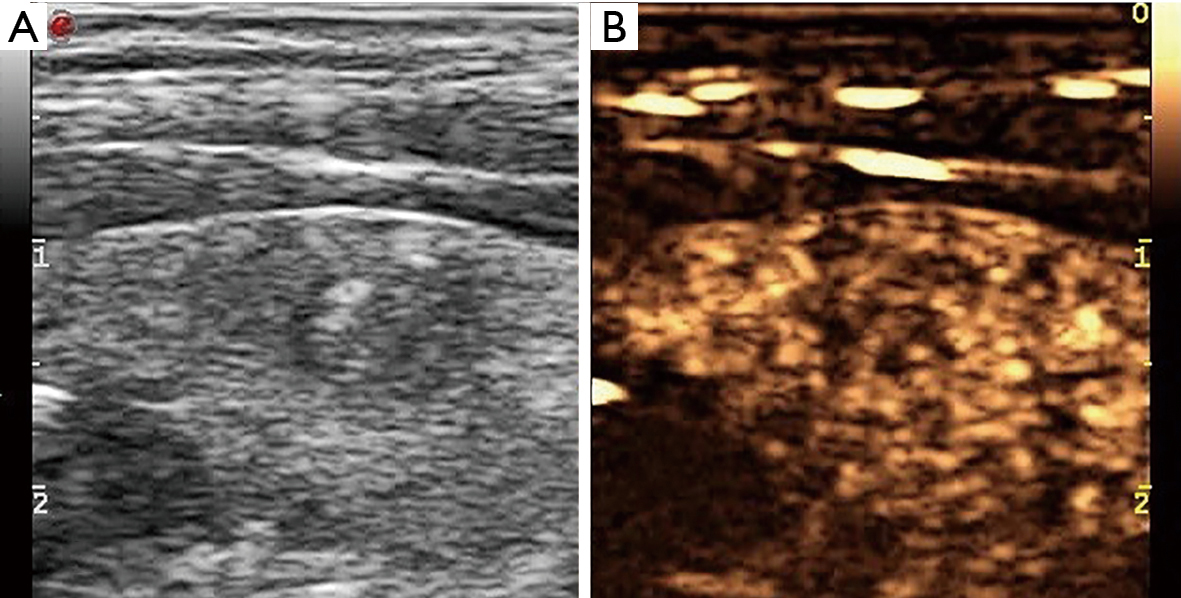 Figure 1 US of a thyroid nodule in a 38-year-old male who underwent fine-needle aspiration. Longitudinal US images demonstrating a hypoechoic nodule in the left thyroid gland (A). The nodule was hypoenhanced on CEUS (B). The cytology was papillary carcinoma and BRAF V600E (+). CEUS, contrast-enhanced ultrasound.

PTC is the most common cancer of thyroid and has an overall favorable prognosis with an average 10 years survival rate of 93% (8). Despite of the excellent prognosis for most patients with PTC, a small percentage of patients experience a more aggressive course of disease (16-18). The BRAF V600E mutation composed of a T to A transversion, which is found in up to 73.4% of PTCs (19) and results in the substitution of valine for glutamate at position 600. The V600E mutant BRAF constitutively activates the MAPK pathway to stimulate the tumorigenesis. The BRAF V600E has emerged as a promising diagnostic as well as prognostic indicator of PTC since its initial discovery. Several studies have shown that BRAF V600E mutation is an indicator of poor disease prognosis because it’s association with advanced disease stage and cancer recurrence (19-21). It has also been reported that the BRAF V600E mutation could increase not only the aggressive nature of tumor but also the recurrence and mortality rates of PTC (22). Therefore, preoperative determination of BRAF V600E mutation was thought to be useful in determination of the management and operative strategy.

US has been proved to be vital in diagnosing thyroid disease (12-14,23). Previous studies have also shown the correlations between the aggressive clinical factors underlying the BRAF mutation and PTC. It was reported that extra-thyroidal extension, multifocality, lymph node metastasis, and advanced TNM were associated with the BRAF V600E mutation in PTC (24). These results suggested the researchers to work on accurate ways to diagnose PTC including the BRAF mutational analysis. Therefore, there is a great need for more accurate preoperative risk stratification systems to inform the BRAF mutation of patients with PTC.

This study examined whether BRAF V600E was associated with CEUS features in PTC. BRAF V600E is only observed in anaplastic carcinoma such as PTC, and not in other thyroid cancers, including follicular carcinoma (8,9). In this study, we only focused on conventional PTC. Most PTCs with BRAF mutation in our study were more often with larger size, no significant enhancement, centripetal, homogeneous, completely enhanced, blurred boundary, irregular shape, and with wash out period at preoperative CEUS than those without BRAF mutations (P<0.001). However, only centripetal, completely enhanced, and irregular shape were showed significant correlation in Spearman’s rank correlation between the CEUS features and BRAF mutation. The pathological sections of malignant nodules revealed the number of sinusoids was much more than that in benign lesions (25). BRAF was proved to play a key role in cell proliferation, differentiation, and apoptosis. Thus, BRAF mutation positive may influence the number of tumor vascular bed, which displayed as centripetal enhancement. Several studies have found that enhancement patterns of thyroid nodules were closely related to lesion size. The nodules smaller than 1cm presented no significant and complete enhancement (5,26). In this study, 1,008 (76.6%) PTCs were smaller than 1 cm. Additionally, the tumors with BRAF mutation invaded outward easily, which might induce the irregular shape.

We also performed a multivariate analysis and revealed that centripetal (OR: 1.465, 95% CI: 1.129–1.903) and no significant enhancement (OR: 0.790, 95% CI: 0.639–0.977) were predictors for the presence of BRAF mutations. The vascular bed of PTC is immature when the tumor is small. The pressure of blood vessels increases due to the compression of proliferating tumor cells, which also hinders the blood supply in tumors. With the increase of cancer volume, a large number of angiogenesis is induced by angiogenesis factors. Therefore, PTMC is characterized by poor blood supply and uneven distribution of cancer cells results in uneven enhancement (27-29). In this study the pattern of no significant enhancement showed well PPV (91.6%) in predication of BRAF mutation. Given the prognostic impact of BRAF mutation, these results suggest that PTCs with centripetal and no significant enhancement patterns of CEUS seem to be associated with BRAF mutation, and also with a worse prognosis.

However, there are truly some limitations in this study. First, it’s a retrospective analysis. A bias toward larger tumors might exist, because these would be more readily available for collection and genetic analysis. This limitation also allows for a selection bias toward patients with better-documented disease. A prospective well-designed study was need for the more accurate assessment of the relation between the CEUS features and BRAF mutations. Additionally, this study is based on FNA results. FNA findings were interpreted as non-diagnostic in approximately 10% to 30% of FNA results (30-32). Our previous study showed that the sensitivity and specificity of BRAF V600E from FNA was 80% and 100% (33). Further study with pathology results would be essential in the future. Thirdly, BRAF mutation was proved to be associated with PTC. However, conventional papillary carcinoma and follicular papillary carcinoma are different disease in the clinical aspect and cytological structure. Thus, the rule of BRAF mutation for differentiation of malignancy according to pathological type should be studied someday.

In summary, our study indicates that CEUS features correlate with BRAF mutation, and CEUS might serve as a useful tool to BRAF mutation in PTC.

Ethical Statement: The authors are accountable for all aspects of the work in ensuring that questions related to the accuracy or integrity of any part of the work are appropriately investigated and resolved. This study was approved by the institutional review board at the Second Affiliated Hospital Zhejiang University School of Medicine and waived the need for informed consent based on the retrospective design.