The clinical significance of ground glass opacities in lung adenocarcinoma in the era of UICC-TNM classification ver.8

I congratulate Dr. Kim on the publication entitled “Consolidation-to-tumor ratio and tumor disappearance ratio are not independent prognostic factors for the patients with resected lung adenocarcinomas”. I read with great interest the article by Kim and colleagues (1), which showed that the consolidation-to-tumor ratio (CTR) or the tumor disappearance ratio (TDR) is not an independent prognostic predictor in patients treated with pulmonary resection when using UICC-TNM classification version 8. As Dr. Kim described in the text, CTR or TDR had been historically considered to be one of the prognostic factors in lung cancer patients (Figure 1). Namely, lower CTR or higher TDR indicates a greater proportion of the histological lepidic component, which usually reflects biologically low-grade malignant behavior in adenocarcinomas (2-5). 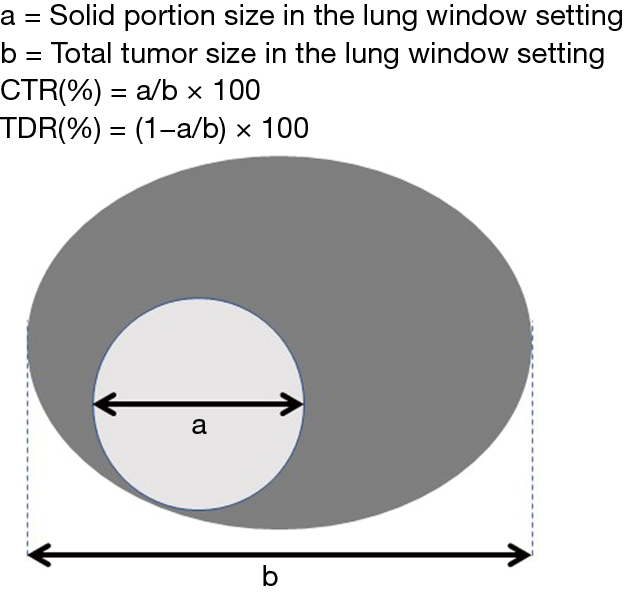 Several recent reports, however, showed that CTR is an independent prognostic predictor only in lung cancer smaller than 1 or 2 cm in diameter (6,7), or that TDR has a significant relationship just with the standard uptake value (SUV) max calculated by positron emission tomography-computed tomography (PET-CT) scanning (8). It has also been reported that tumor invasiveness or prognosis cannot be predicted by the radiographic appearance (9). We previously reported no lymph node involvement in GGO-dominant lung cancer, though no significant survival superiority was observed on multivariate analyses (10). We also found the usefulness of volume-based CTR with 3-dimensional assessments for accurate pathological staging of lymph node metastasis in stage I and II adenocarcinoma (11). Tumor diameter is classified in units of 1 cm in the current UICC-TNM classification version 8, which is well recognized to predict postoperative survival outcomes (12). Thus, the study by Dr. Kim could indicate a change in the clinical significance of the CTR or TDR evaluated using radiographic imaging according to the revised staging or variables for lung cancer. We should meticulously understand the results for GGO appearance calculation, since the lepidic adenocarcinoma component definitively has biological low-grade malignant potential histologically.