Conventional robotic thoracic surgery has been performed with multiple robotic arms through 4 or more ports, and robotic single-site approaches have also been attempted through enlarged single incisions. The authors previously reported our experiences with robotic single-site thoracic surgery for mediastinal mass excision (1). However, using the single-site platform of the da Vinci system, the number of incisions and ports can be reduced, but this approach has limitations such as non-articulating, and free wrist movement and required long distance (8 cm) from incision to target lesion. In April 2014, the first flexible robotic single-port surgical system (da Vinci SP™ Surgical System, Model SP999, Intuitive Surgical Inc., Sunnyvale CA, USA) was approved in genitourinary surgery (2). This system has 3 flexible instruments and a stereoscopic binocular camera, all contained within a cannula of 2.5 cm diameter. In contrast to the previous robotic single-site platform, this system has flexible instruments; thus, it could be used for complex procedures in thoracic surgery. However, there are some limitations for applying the da Vinci SP system in thoracic surgery. First, the 2.5-cm diameter of the robotic single-port cannula makes it difficult to insert the cannula through the intercostal spaces (ICS). In addition, the SP system requires more than a 10 cm length between the cannula tip and lesion to triangulate the instruments and enable full articulation of both the elbow and wrist instrument joints. Partial articulation of the wrist joint is possible at about a 5-cm insertion length. Nevertheless, tissues located within 10 cm from the cannula tip are difficult to dissect since the instruments do not fully articulate (Figure 1). Chiu et al. reported a preclinical cadaveric study on transcervical esophagectomy by SP system, but other thoracic procedures were not reported previously (3). Therefore, this preclinical, cadaveric study was performed to evaluate the feasibility of the da Vinci SP™ system for various thoracic procedures, and to investigate which positions and approaches are optimal for surgeries. 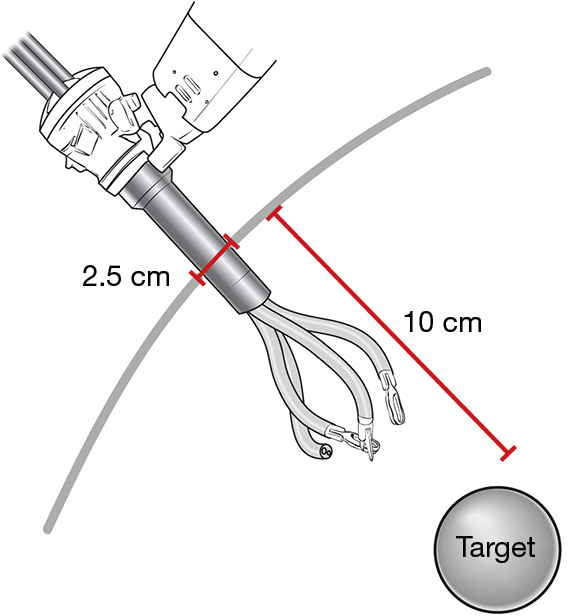 Three fresh cadavers were used for this preclinical study. Experiments were performed at a 3rd party laboratory in Germany, which is equipped with the da Vinci SP system. Access to the cadaveric models was enabled, with compliance to ethical standards of the local ethics committee, and the Helsinki Declaration of 1964 was followed. Intuitive Surgical Inc. provided access to the da Vinci SP robot and engineering support. Three different approaches were evaluated: subcostal, subxiphoid and transcervical approaches for extended thymectomy, pulmonary lobectomy, and esophagectomy. The advantages and disadvantages of these approaches were assessed and summarized. All operations were done by single surgeon (SY Park).

For subcostal approach, a 12 mm assistant port was inserted in the mid-axillary line in the 9th ICS to insufflate the chest cavity with 15 mmHg carbon dioxide (CO2) and to displace the diaphragm inferiorly. Subsequently, a 4-cm length skin incision was made right below the subcostal margin at the mid-clavicular line and a tunnel was dissected superiorly with long Metzenbaum scissors. Connection of the tunnel from the subcostal skin incision into the thoracic cavity was confirmed with an endoscope through the 12 mm port. The GelPoint Mini access system (Applied Medical Corporation, Rancho Santa Margarita, California, USA) was placed through the skin incision but not “rolled” down to the skin level to create a “sleeve” for the SP cannula and instruments (Figure 2A). To enable triangulation of the SP instruments with sufficient working distance between it and the tissue, the SP cannula was initially fixed within the GelPoint cap floating above the patient (Figure 2B). The Gelpoint cap and robotic cannula was fixed with tie. For subxiphoid approach, a transverse 4-cm skin incision was made in the supine position and the GelPoint mini was inserted. The SP cannula was fixed in the floating GelPoint cap, as previously described (Figure 2C). 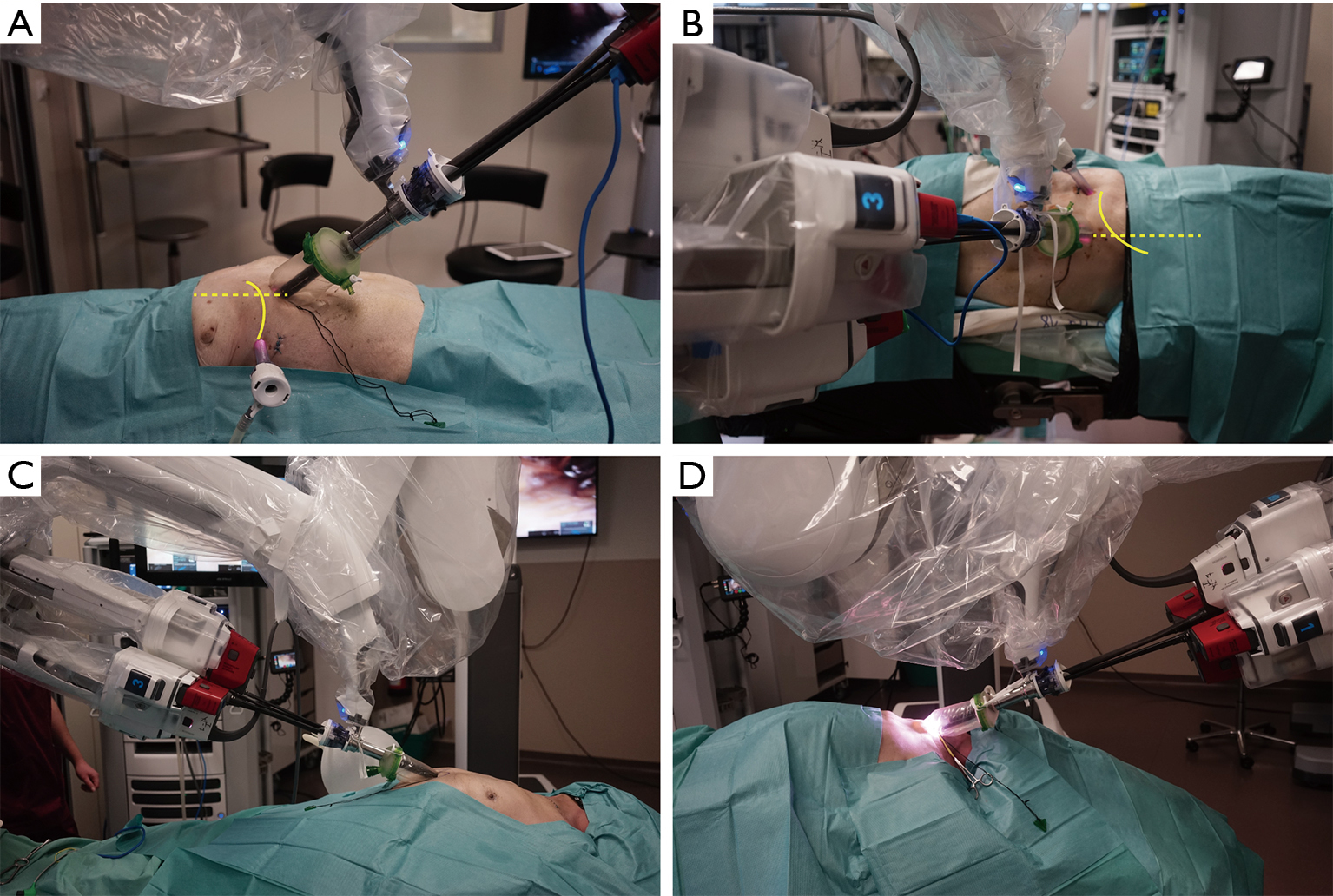 For the transcervical approach, 4-cm skin incision was made along the left supraclavicular fossa. The sternocleidomastoid muscle was retracted anteriorly, and dissection was performed on the plane posterior to the sternocleidomastoid and anterior to the common carotid artery (4). After identification of the cervical esophagus, the GelPoint mini was inserted into the skin incision and the SP cannula was fixed again, as described above (Figure 2D).

Extended thymectomy was conducted via subcostal and subxiphoid approaches. In the supine position, using a right subcostal incision, the right-side fat at the right cardiophrenic angle was easily approached. The dissection was done by monopolar scissor and Maryland bipolar forceps. After confirmation of the right phrenic nerve, dissection of the entire thymic tissue was possible (Figure 3). The small branches of innominate vein were ligated with medium clip applier. Dissection of the bilateral upper pole above the innominate vein and confirmation of the left phrenic nerve were also possible. Particularly, dealing with complex situations (vascular involvement) might be possible. The only area where dissection was difficult was at the left cardiophrenic angle (Figure 4A). This approach might be applicable to various anterior mediastinal mass excisions. Using the subxiphoid approach, complete dissection of the bilateral cardiophrenic area was difficult due to the limited working distance, although the cannula was fixed 10 cm above the skin incision (Figure 4B). Furthermore, the SP camera and instruments interfered with the sternum. 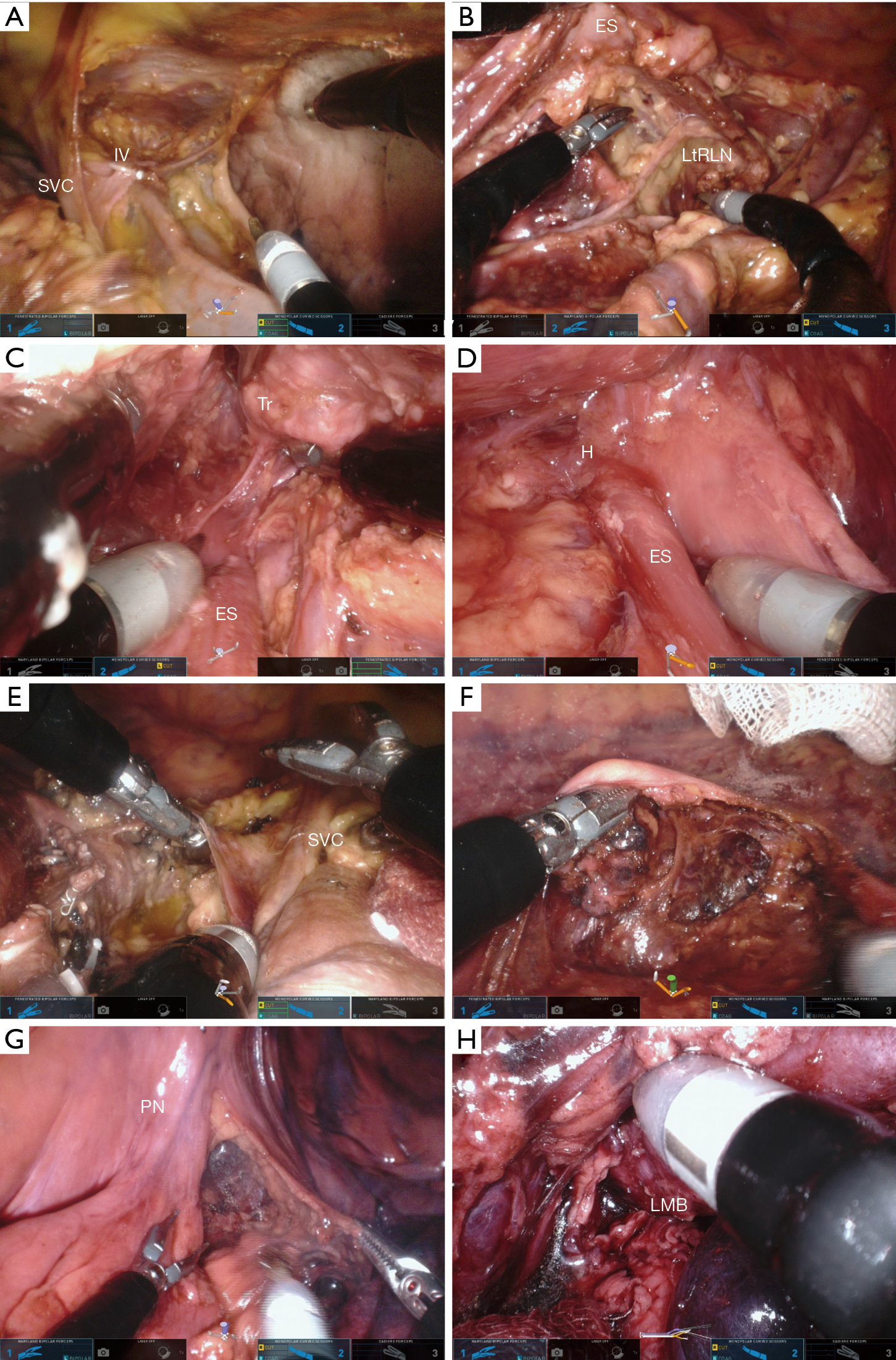 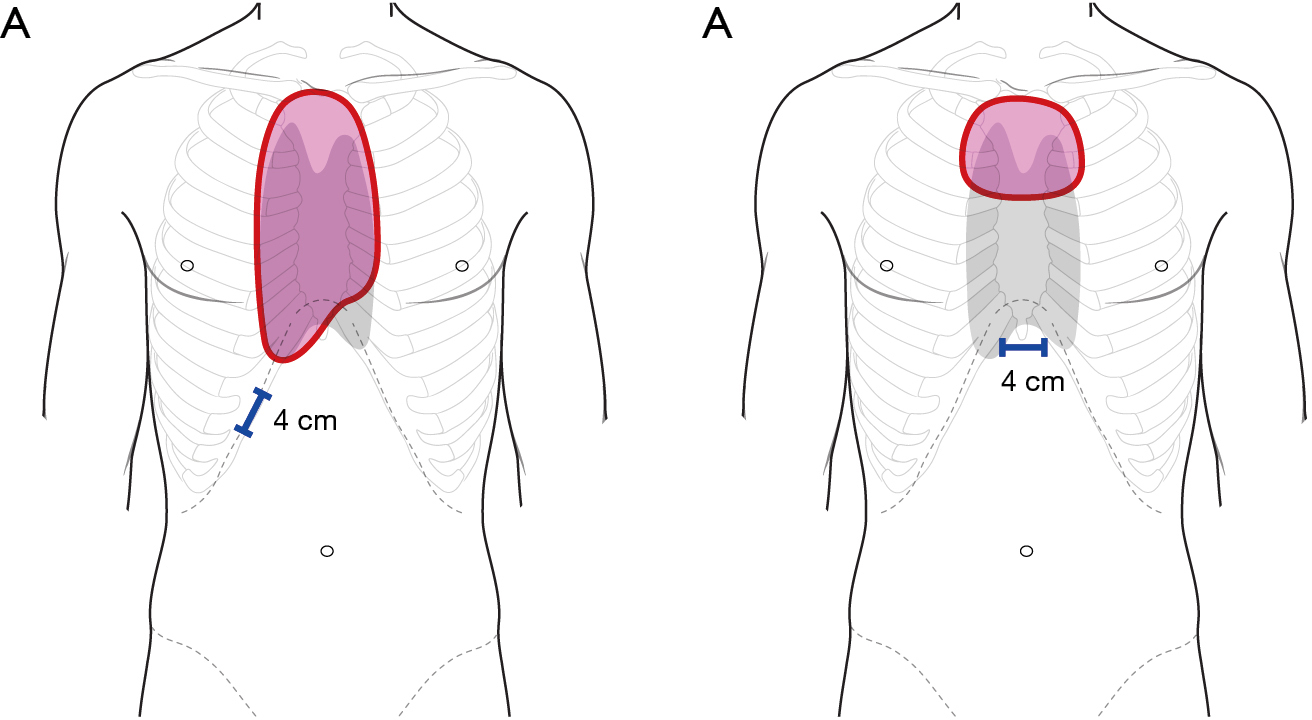 In the right subcostal approach, the patient was positioned in a semi-prone position for esophagectomy. The access to the posterior mediastinum was good. The entire intrathoracic esophagus could be mobilized from the diaphragm to the apex. Particularly, dissection of the right and left recurrent laryngeal area was possible (Figures 3B,5). We considered that this approach could be also applied to the excision of a posterior mediastinal mass. In the transcervical approach, esophageal dissection was relatively difficult despite interferences between the instruments within the narrow and tubular space. The subcarinal area was easily identified and the respective lymph nodes were dissected as a whole (Figure 3C). The dissection was continued all the way down to the hiatal level (Figure 3D). 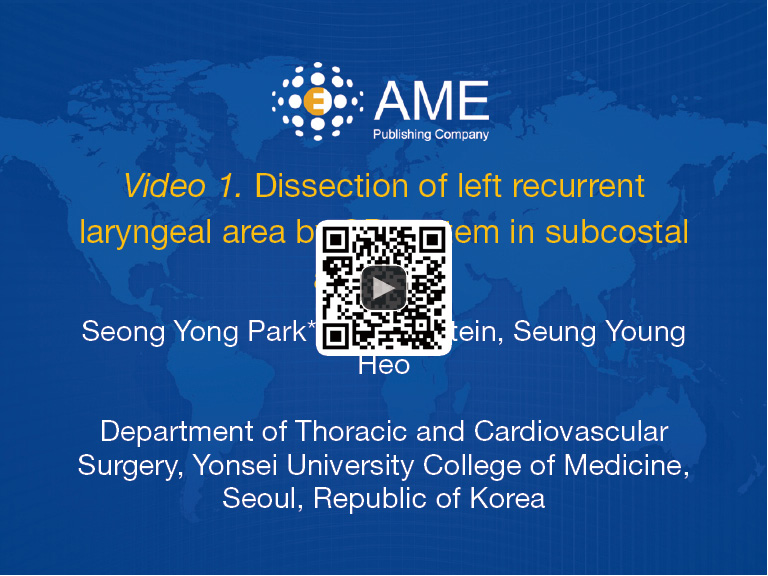 Compared to uniportal video-assisted thoracoscopic surgery (VATS) and current robotic single-site approaches, the da Vinci SP system seems to offer some advantages. It enables a more meticulous dissection by employing three articulated instruments simultaneously, whereas only two non-articulated instruments are available in the robotic single-site platform, and there is limited articulation in uniportal VATS procedures. In addition, interferences between robotic instruments are reduced in the da Vinci SP system due to the parallel entrance of the instruments through a single port. Furthermore, the length of the skin incision is reduced with this system to be as small as 2.8 cm. By making the incision at subcostal area, we can reduce the postoperative neuralgia compared to the conventional multiport robotic surgery which uses the intercostal space.

In this study, using the right subcostal approach, all thymic tissues, except the left cardiophrenic angle, could be dissected completely. Gonzalez-Rivas and Ismail made a subcostal incision 1 cm from the xiphoid, but we considered the midclavicular line more appropriate to obtain the desired distance from the incision at the right cardiophrenic angle (4). For the esophagectomy, the access to the posterior mediastinum was suitable for all procedures and dissection of the bilateral recurrent laryngeal area was satisfactory in the right subcostal approach. The transcervical approach was possible for esophagectomy, but the trajectory of the SP system has to be adapted to the level of the dissection. Bilateral pulmonary lobectomies using a subcostal approach with semi-prone patient position and dissection of the mediastinal lymph nodes was feasible. One current issue with lobectomy using the da Vinci SP system is the need to have an additional port for the stapling. In the cadaver we used, the heart was not enlarged, so left upper lobectomy was feasible. But if the patient has the cardiomegaly in human, the left subcostal approach could have the limitations for operation in some cases.

This study has several limitations. First, because it was a cadaveric study, and it can could only simulate the real clinical situation and surgical dissection to an extent certain degree. Bleeding, cardiac and vessel pulsations in a real human would surely make these procedures more challenging. In addition, because the blood vessels were had already collapsed, the dissection of the mediastinum was relatively simple and easy. During the transcervical a approaches, the heart and great vessels were retracted fully, but in a real human situation, retraction could potentially result in severe hypotension and tearing of the great vessels. Further, although We also did not perform the left lower, right middle, and right lower lobectomies, but we think consider that lobectomy of these lobes also could be done performed with via subcostal approaches. Lastly, we did not evaluate any other possible approaches, such as intercostal approaches. We speculate that Even although the 2.5 cm cannula cannot be inserted through the ICS, with a different instrument alignment and port configurations, an intercostal approach might be feasible in the future.

We thanks to Dong-Su Jang for drawing the figures.