Stereotactic body radiation therapy (SBRT) has emerged as a safe and efficacious treatment modality for selected patients with pulmonary metastases (1,2). Encouraging results from phase I and II trials have been followed by large multi-institutional databases to refine the patient selection process (3,4). The increased utilisation of SBRT for patients with pulmonary metastases was reflected in a recent European survey involving 30 centres from six countries, in which 90% of the responding radiation oncology centres were treating pulmonary metastases with SBRT (5). There is now growing evidence to support the hypothesis that radical treatment of oligometastatic disease with SBRT can improve oncological outcomes (6-8).

Approximately 10–15% of all patients with colorectal cancer (CRC) develop pulmonary metastases, and CRC represents the second most common origin of all secondary pulmonary tumours (2,4,9,10). Previous reports have demonstrated that the high doses per fraction delivered by SBRT have the ability to overcome differences in intrinsic radiosensitivity of different histologies in spinal metastases (11,12). However, other reports suggest that SBRT for pulmonary metastases from colorectal origin may not achieve as high local control (LC) rates as pulmonary metastases of other primary histologies (13,14). More recently, gene expression analyses have suggested an intrinsic radioresistance of colorectal pulmonary metastases, indicating that adjusted doses of SBRT may be necessary to achieve LC (15,16). These findings are somewhat surprising, as CRCs in their primary location are considered fairly radiosensitive and responsive to fractionated radiotherapy.

The systematic review was performed using electronic databases EMBASE and Ovid Medline, from their dates of inception to November 2018. To ensure adequate sensitivity of the search, we combined the terms (pulm* or lung) and (metasta* or oligometasta*) and (sbrt or sabr or stereotactic body radiotherapy or stereotactic radiotherapy or radiosurgery) as either Medical Subject Headings or keywords. All identified articles were then assessed by applying the predefined selection criteria.

Eligible studies for inclusion in the systematic review were those in which LC, PFS, or OS outcomes were presented for patients with colorectal pulmonary metastatic disease treated by SBRT. When institutions published duplicated studies with accumulating numbers of patients or increased lengths of follow-up, only the most complete or updated reports were included for statistical analysis. Case reports, conference abstracts or presentations, editorials, and publications not written in English were excluded. Studies with less than 10 patients were also excluded. Data were extracted from texts, tables, figures, and supplementary material. The definitions of LC, PFS, and OS were noted for each paper. Prognostic factors were selected based on categorization of the various prognosticators in each report. To assess the methodological quality of the selected studies, the Downs and Black scale was used to evaluate the quality index and categorized each report as good, fair or poor (17). Two investigators (D Wang and C Cao) independently reviewed each retrieved article. Discrepancies between the two reviewers were resolved by discussion and consensus.

Meta-analysis was performed by combining the reported outcomes of selected studies using a random effect model. Hazard ratio (HR) and standard error were extracted or calculated from each study using the Tierney and Parmar methods described previously (18,19). When calculations were not possible because of inadequate data, HRs were estimated using Kaplan-Meier graphs. I2 statistic was used to estimate the percentage of total variation across studies attributable to heterogeneity rather than chance. Meta-analysis was performed using Review Manager (version 5.1.2, Cochrane Collaboration, Oxford, United Kingdom). All P values were two-sided, and P≤0.05 was considered to indicate statistical significance.

Quantity and quality of trials

Applying the predefined selection criteria, a total of 5,482 records were found through the electronic search. After identification of additional records through other sources and removal of duplicate studies, 4,157 articles remained for screening. Of these, 3,961 were excluded on the basis of title or abstract content. After review of the full text of the remaining 196 articles, 18 were found to meet the selection criteria for the systematic review (13,21-37). All of the selected studies were non-randomized observational studies, with 9 studies presenting comparative clinical data on patients with colorectal pulmonary metastatic disease with non-colorectal pulmonary metastatic disease (13,21,25,27-29,31,34,37). Quality assessment using the Downs and Black scale reported scores that indicated good (13,21,23,24,26-28,35) or fair quality (22,25,29-34,36,37). A summary of the study selection process is presented in the PRISMA chart in Figure 1. Patients were treated according to institutional regimens, with different doses, motion management, and beam management, as detailed in Table 1. Table S1 displays SBRT regimens, including Gy and fractions, by study. 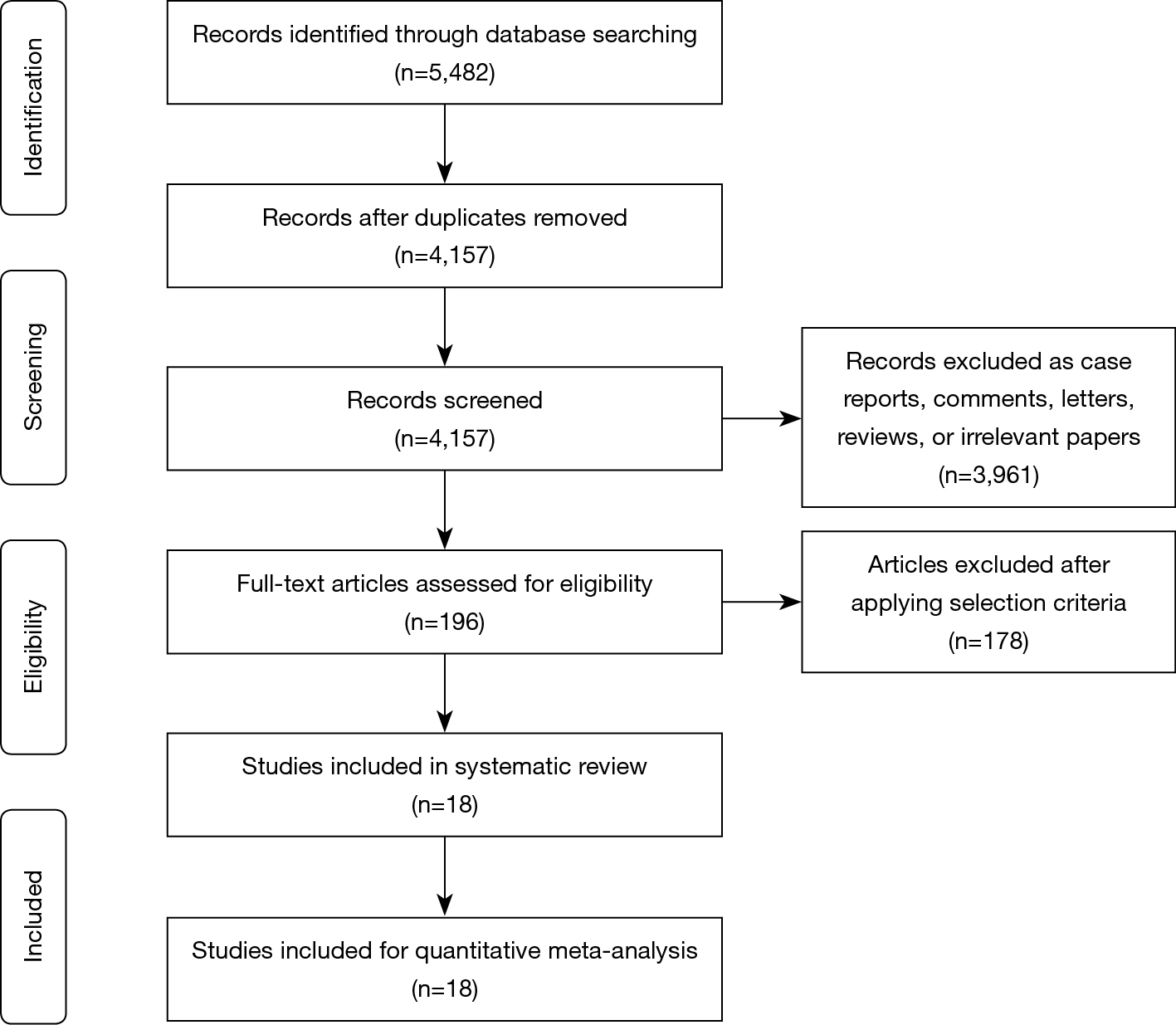 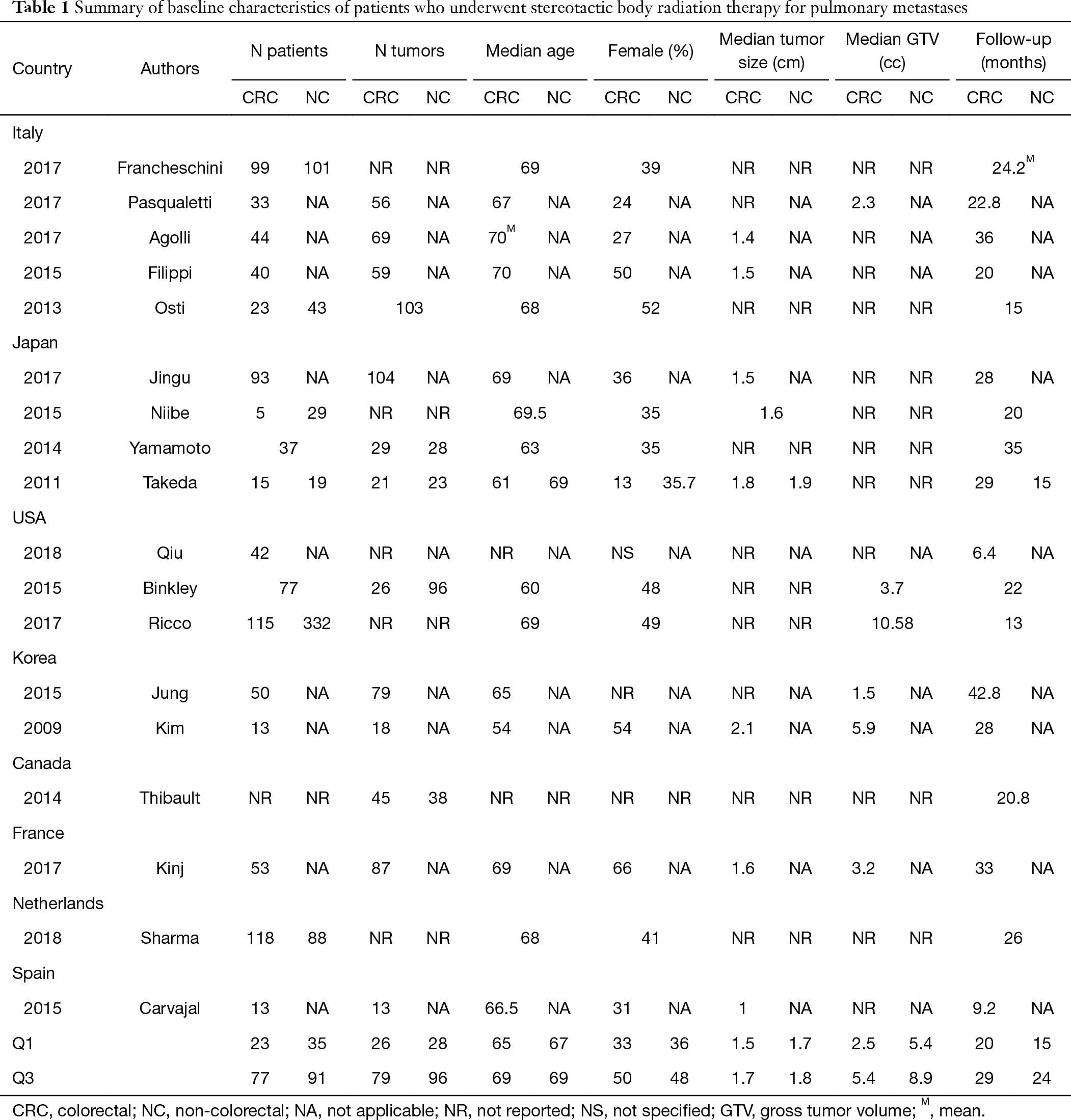 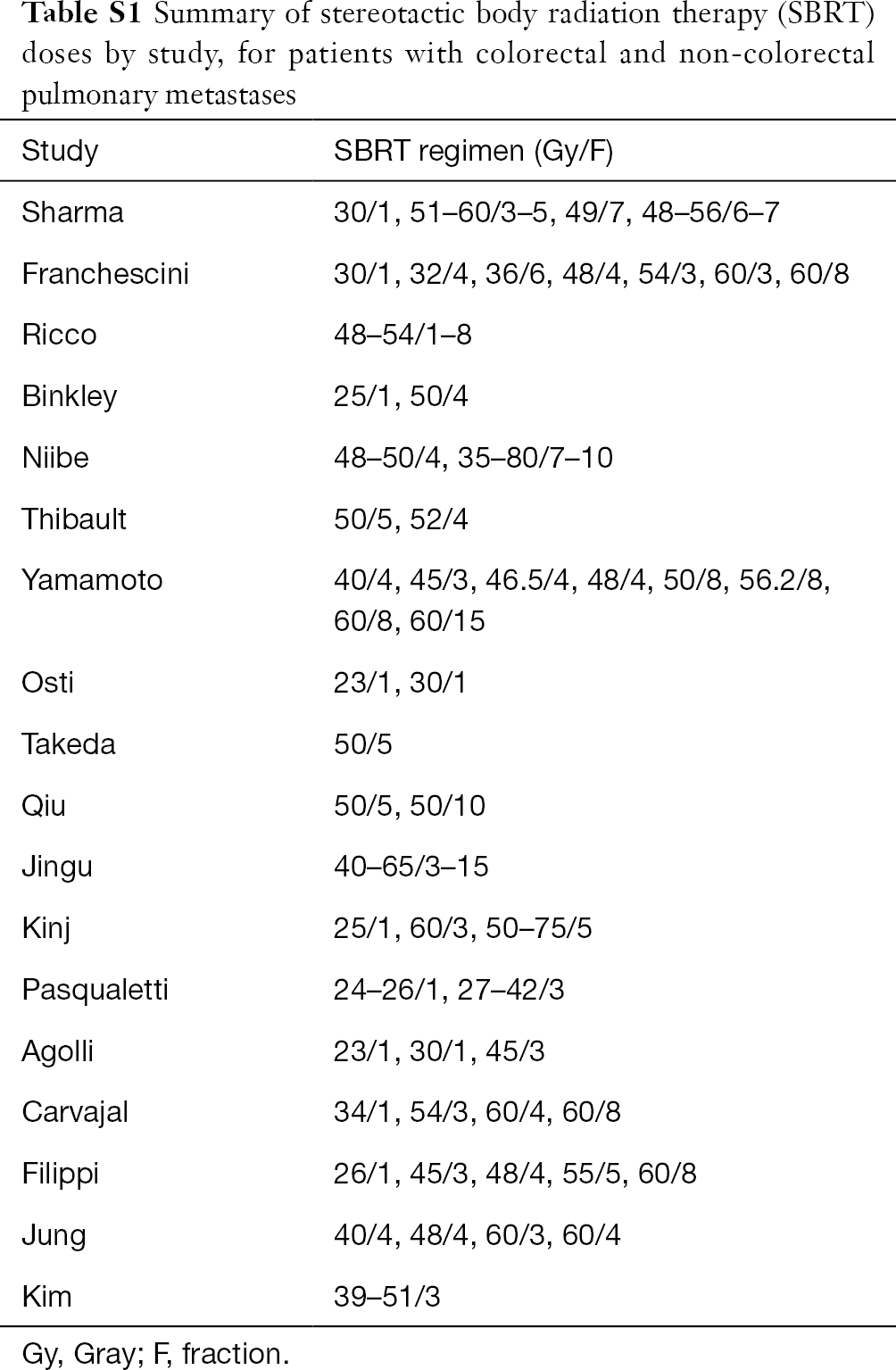 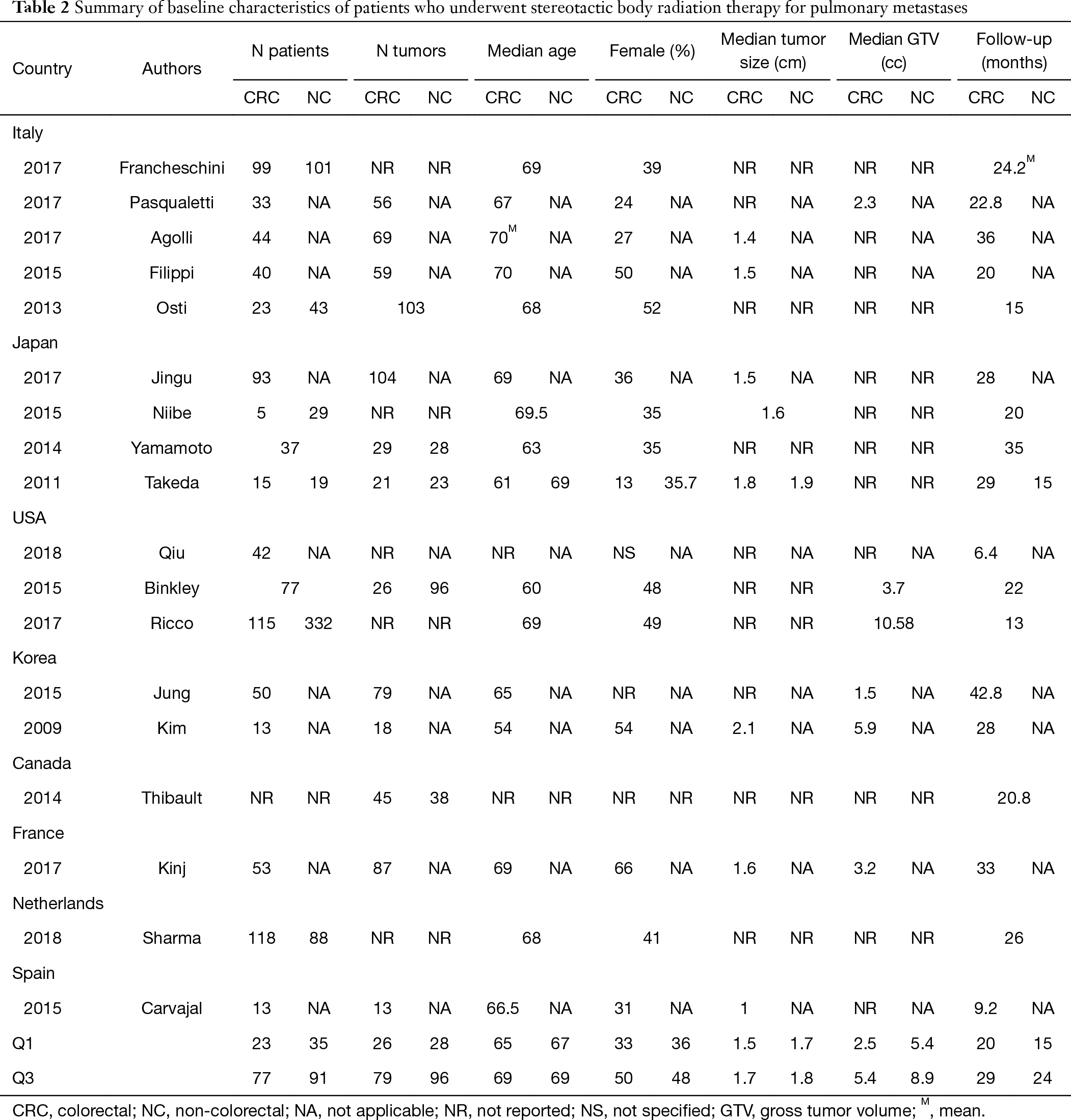 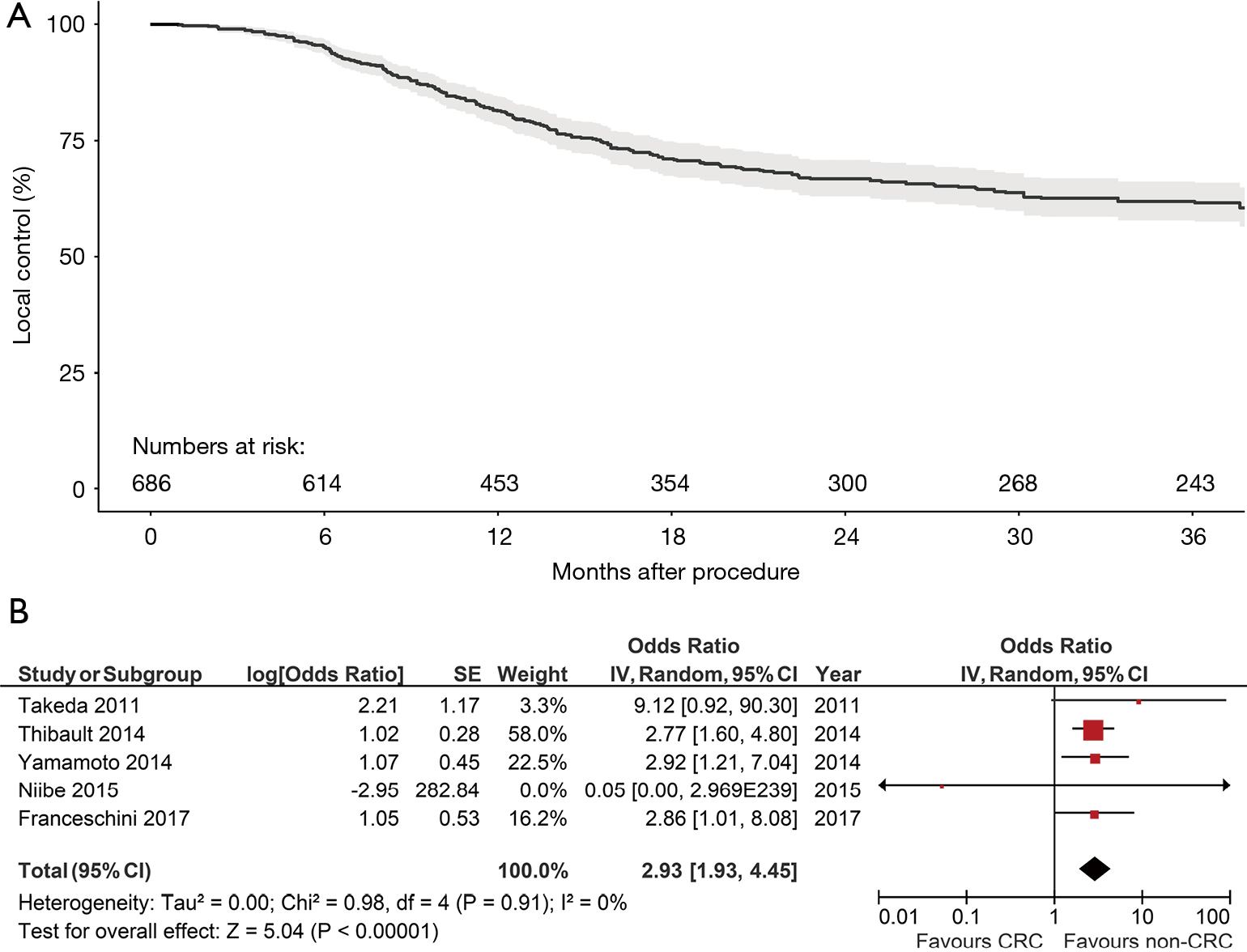 Figure 2 Local control. (A) Cumulative Kaplan-Meier graph demonstrating estimated local control of colorectal pulmonary metastases after stereotactic body radiation therapy. Shaded region indicates 95% confidence interval (CI). (B) Forest plot of the odds ratio (OR) of local control in patients with colorectal pulmonary metastases versus non-colorectal pulmonary metastases after stereotactic body radiation therapy. The estimate of the OR of each study corresponds to the middle of the squares and the horizontal line shows the 95% CI. On each line, the numbers of events as a fraction of the total number randomized are shown for both treatment groups. For each subgroup, the sum of the statistics, along with the summary OR, is represented by the middle of the solid diamonds. A test of heterogeneity between the trials within a subgroup is given below the summary statistics. 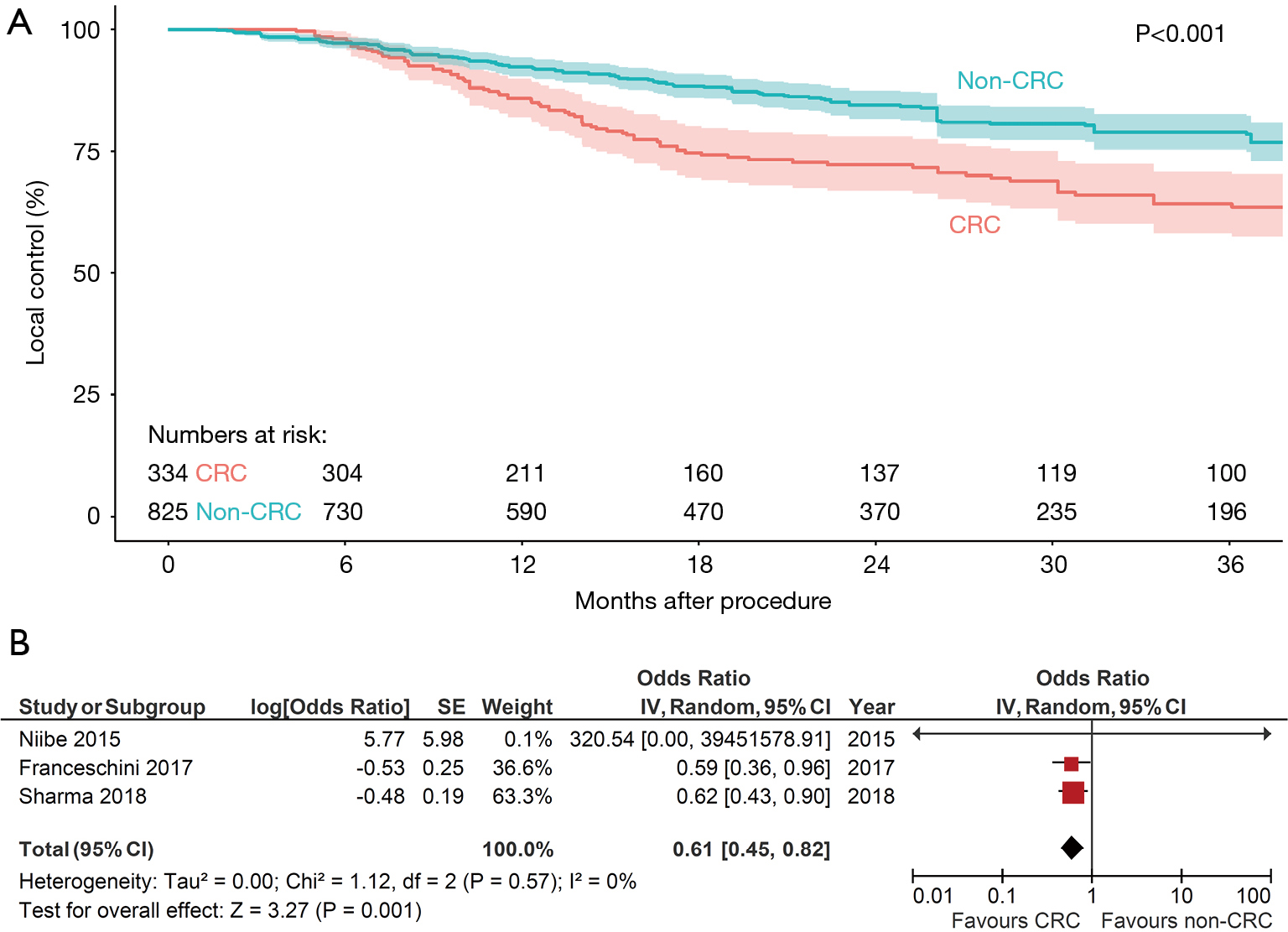 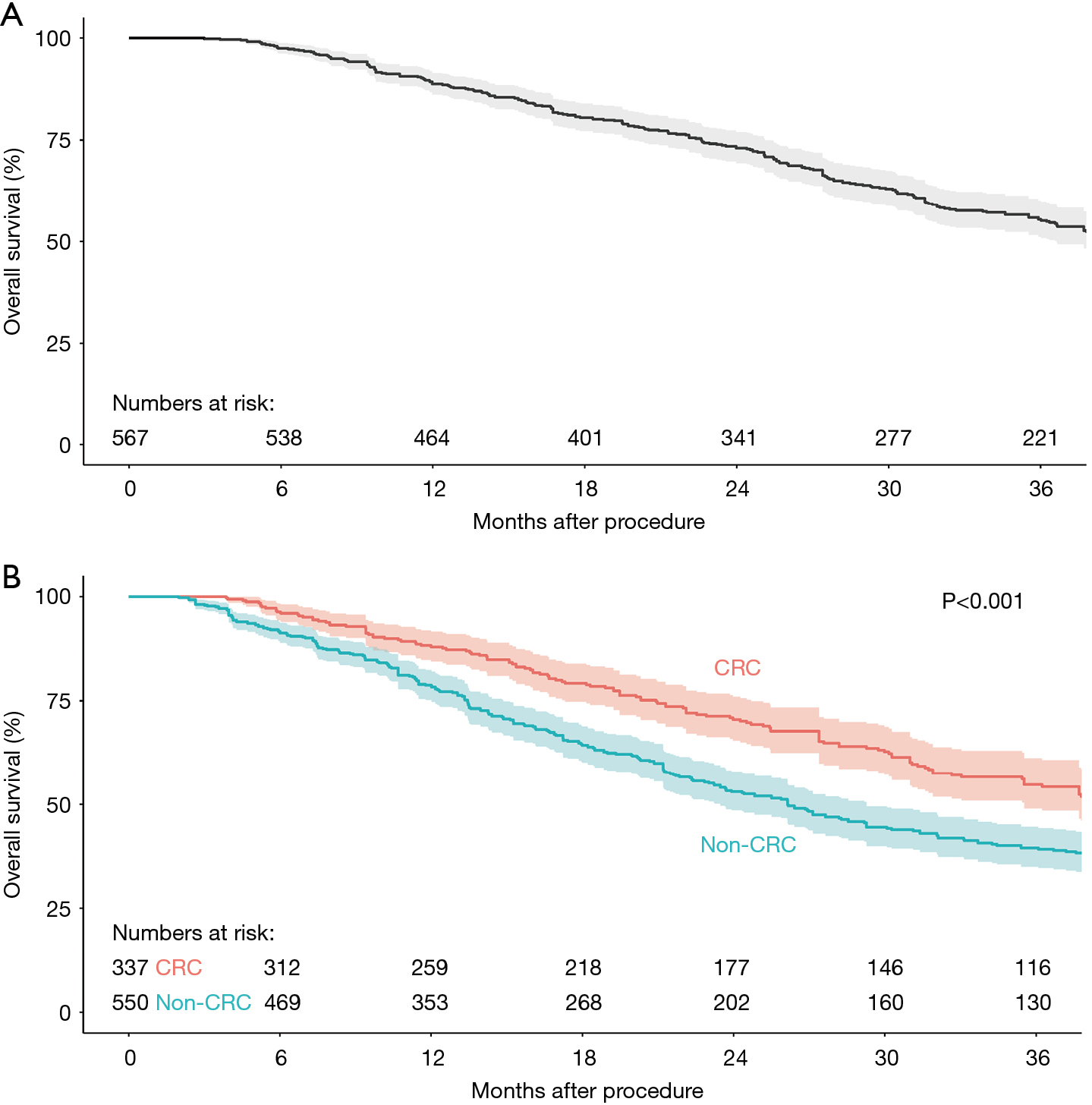 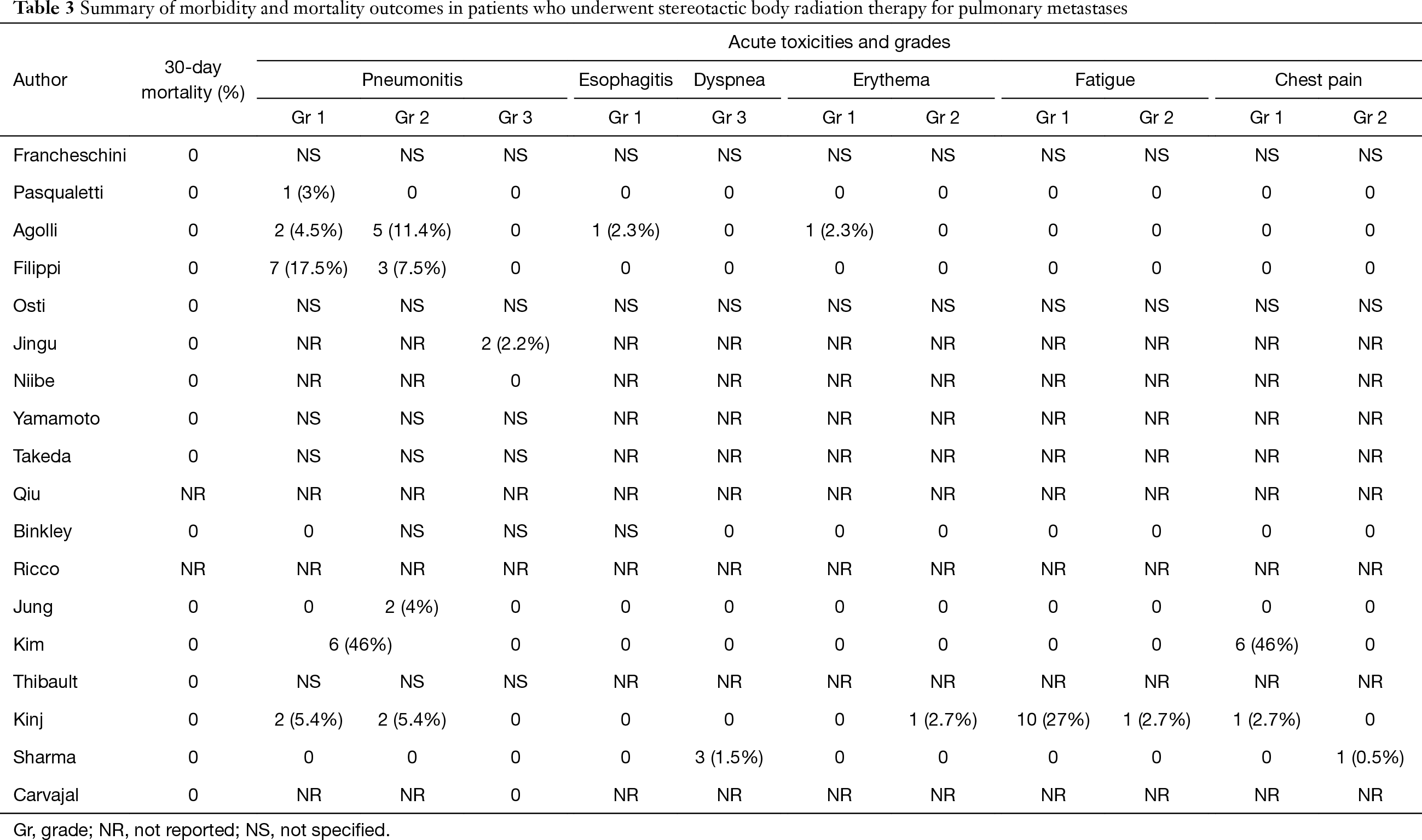 A number of patient-, tumor- and treatment-related factors were identified from individual studies to have significant impact on local disease control. These included gender, age, histopathology, number and size of lesions, standardized uptake value (SUV) max, biologically effective dose (BED) of SBRT, and completeness of response. A summary of these prognostic factors is presented in Table S2. 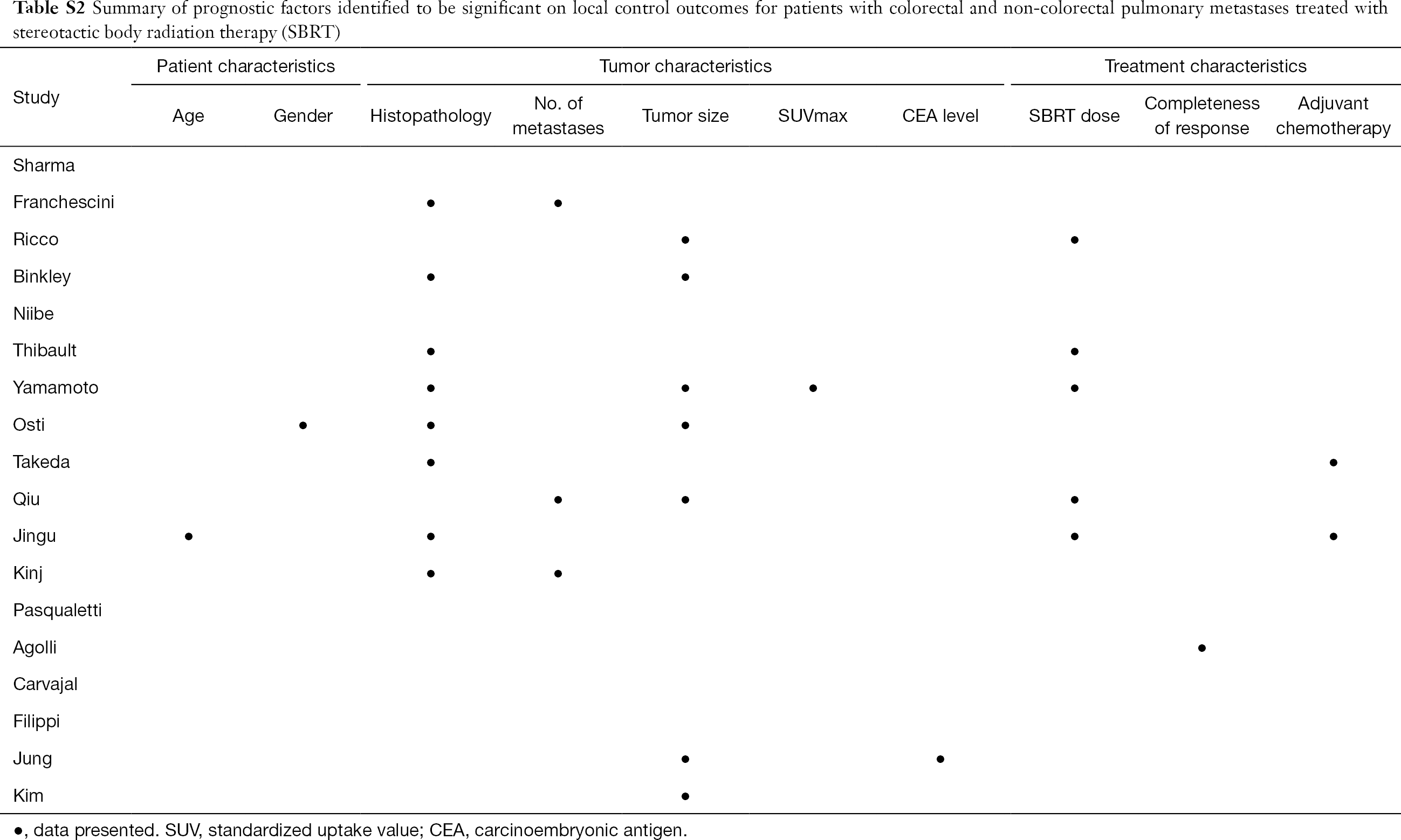 With increased clinical experience, pulmonary metastases are increasingly being treated by SBRT with minimal peri-procedural toxicity. Previous studies have suggested differing oncological efficacies of SBRT based on the histology of the primary cancer (13,28). More recently, multigene expression models have been developed to estimate the radiosensitivity index (RSI) of different tumor types (15,38). Some have proposed the utilization of genomically-adjusted radiation dosing to personalize radiation therapy for patients with oligometastatic pulmonary metastases (39). Patients with radioresistant subtypes of lesions have been postulated to benefit from escalated BEDs, although these findings have largely been based on models using surgically resected specimens rather than direct RSI measurements (16).

Limitations of the present study included the variable treatment regimens prescribed in each institution, as well as differing baseline patient and tumour characteristics. The significance of adjuvant and neoadjuvant chemotherapy was difficult to interpret, partly due to the heterogenous regimens prescribed by each institution. Patient selection bias may also have caused some studies to report improved LC with adjuvant chemotherapy (26,29), whilst others reported worse OS (30). Future prospective studies are required to improve the understanding of the role of systemic therapy in conjunction with SBRT for oligometastatic pulmonary metastatic disease. In addition, non-colorectal pulmonary metastases varied in histological origin and were sometimes not specified. Colonic and rectal cancers were often presented as a single group, and follow-up protocols also differed between studies. Nonetheless, the present systematic review represents the most comprehensive data to date, and provides a useful overview of oncological outcomes for patients with CRC metastases treated by SBRT.

Funding: This research was funded in part through the NIH/NCI Cancer Center Support Grant P30 CA008748.