Vitamin C is generally considered a micronutrient that is required for collagen synthesis and the prevention of scurvy. Vitamin C, however, plays an essential role as an antioxidant, is a cofactor for numerous biological reactions, and plays a critical role in neurotransmission and neuromodulation. Furthermore, vitamin C has a critical role in the host defence of infections by increasing bacterial killing, protecting the host from oxidant injury, preserving mitochondrial and metabolic function, modulating the inflammatory response, limiting organ damage and attenuating the delayed immunosuppressive phase of sepsis (1-3). Ascorbic acid (vitamin C) is synthesized in the liver from glucose-6-phospate in most mammals and from fructose-6-phospate in all plants. Ascorbic acid is synthesized in the kidney of reptiles and amphibians. However, humans (anthropoid primates), guinea pigs and a few fish are unable to synthesize vitamin C due to a fatal mutation in the L-gulono-γ-lactone oxidase (GULO) gene which codes for the enzyme responsible for catalyzing the last rate-limiting step of vitamin C biosynthesis. The liver of goats has been estimated to produce between 2-4 g of vitamin C per day. Furthermore, when goats are stressed, vitamin C synthesis increases significantly. Observations of very high levels of vitamin C in the adrenal gland as well as its release in response to adrenocorticotrophic hormone (ACTH) provides further evidence that vitamin C plays a role in the stress response (4). When the pituitary-adrenal axis (HPA-axis) is stimulated the concentration of vitamin C in the blood increases; this observation was first noted in 1962 (5). Furthermore, the vitamin C concentration in arterial blood of adrenalectomized rats increases following stress (6). In these experiments, the concentration of vitamin C in the inferior vena-cava above the diaphragm exceeded that in arterial blood by 70%. These experiments demonstrate that both the liver and adrenal gland contribute to the increased release of vitamin C that is observed in stressed animals. Similar observations across animal species suggest that the role of vitamin C in the stress response has been preserved by evolution (7,8). Interestingly, there is a strong inverse correlation between the ability of an animal to endogenously produce vitamin C and the cortisol response when stressed (Figure 1) (9,10). This further suggests that the increased production and secretion of vitamin C is an essential component of the stress response, and that ascorbic mutants (Homo Sapiens Ascorbicus) (11). attempt to compensate by increasing cortisol production. The inability to produce vitamin C during stress leaves mutant humans at increased risk of adverse outcomes during both psychologic as well as physiologic stress. In a randomized placebo-controlled trail, Brody et al. demonstrated that oral vitamin C attenuated the blood pressure, cortisol, and subjective responses to psychological stress in human volunteers (12). 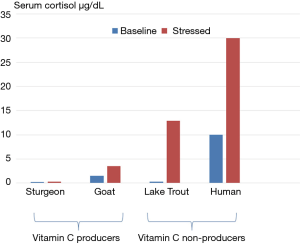 Exposure of the host to diverse noxious stimuli results in a stereotypic and coordinated response, referred to by Hans Selye as the “general adaption syndrome” (or stress response) which serves to restore homeostasis and enhance survival (13). The stress response is mediated primarily by the HPA axis as well as the sympathoadrenal system (SAS). Although not well recognized, the increased secretion of vitamin C by the liver and adrenal likely plays an important role in the coordinated stress response. Activation of the HPA axis results in the release of ACTH by the anterior pituitary with the increased synthesis and release of cortisol. Activation of the SAS results in the secretion of epinephrine and norepinephrine from the adrenal medulla and sympathetic nerves. Increased circulating cortisol and catecholamines acts via multiple mechanisms to enhance cardiovascular reserve and provide a ready source of fuel (glucose and lactate) for the brain, heart and skeletal muscles allowing the organism to take appropriate action (flight or fight). Vitamin C has diverse biological actions (Table 1), many of which likely play an important role in the stress response and act synergistically with cortisol and catecholamines. Most notably, vitamin C is required for the synthesis of catecholamines and for normal adrenergic responsiveness (14). Vitamin C enhances immune function, which may reduce the risk of infection. Furthermore, acute stress (including aerobic exercise) results in the generation of reactive oxygen species that cause cellular injury (15); vitamin C is a potent anti-oxidant that limits oxidant injury.

The inability of humans to produce vitamin C is likely highly deleterious during sepsis due to the rapid metabolic consumption of this stress hormone. Gao et al., using a cecal ligation and puncture sepsis model (CLP) in wild type and GULO-/- knockout mice, demonstrated greater survival of the wild type mice (16). However, the mortality was reduced to almost zero in both groups of mice that were treated with parenteral vitamin C. This study demonstrates the beneficial role of both endogenously produced as well as exogenous (therapeutic) vitamin C in sepsis. Fuller et al. demonstrated the lethality of endotoxin in vitamin C depleted guinea pigs as compared to control animals (17). Clinical studies demonstrate that all septic patients have low vitamin C levels, with 40% having levels compatible with “latent scurvy.” (18-20). Vitamin C has a number of crucial protective and beneficial roles in sepsis; these are outlined in Table 1 (1). Considering the inability of “Homo Sapiens Ascorbicus” to synthesize vitamin C and the rapid depletion of dietary vitamin C stores in sepsis, it is therefore logical that vitamin C supplementation would be beneficial in sepsis. In addition, the addition of corticosteroids and thiamine appears to have synergistic beneficial effects when combined with vitamin C (HAT therapy) (1-3). Indeed, preliminary data demonstrates that HAT therapy may reduce the morbidity and mortality of patients with sepsis and septic shock (21,22).

It is noteworthy that over the last 3 decades, more than 100 clinical trials have been published which have failed to find a new therapeutic approach which improves the outcome of patients with severe sepsis and septic shock (23). This has created a nihilistic mindset in which HAT therapy has been dismissed as “biologically implausible” (24). Sepsis is, however, probably the most complex diseases known to man. Indeed, Calvano et al. demonstrated that endotoxin altered the expression of over 3,700 unique genes in mononuclear cells (25). It is therefore rather simplistic to imagine that blocking or altering a single molecule or pathway would have a meaningful effect on the pathophysiology of sepsis. In this, regard vitamin C differs from the previous approaches as this molecule has numerous and diverse modes of action targeting multiple molecules and biological pathways; these are summarized in Table 1 and reviewed in a number of publications (1,2,26). These biological properties are synergistically enhanced when vitamin C is combined with other biological agents (antibiotics, corticosteroids, and thiamine). This concept is exemplified by the elegant in-vitro study by Dey and Bishayi (27). These authors evaluated ascorbic acid in combination with antibiotics (Ofloxacin and Chloramphenicol) to kill S. aureus by mouse peritoneal macrophages. In this model, bacterial killing was significantly increased when the murine peritoneal macrophages were pre-incubated with ascorbic acid and then co-treated with antibiotics as compared to treatment with antibiotics alone. Furthermore, treatment with ascorbic acid decreased proinflammatory cytokine production including tumor necrosis factor- α (TNF-α), gamma interferon (IFN-γ) and interleukin-6 (IL-6) and the inflammatory markers inducible nitric oxide synthetase (iNOS) and cycloogegenase-2 (COX2). Similarly, Barabutis et al. demonstrated that the combination of vitamin C and corticosteroids protected pulmonary endothelial cells from lipopolysaccharide induced cell death when applied in combination but not when administered alone (28). These studies demonstrate the diverse and potent synergistic actions when vitamin C is combined with other agents that have biologically beneficial effects in sepsis. What makes HAT therapy truly remarkable is the complete lack of reported side effects (1,2,26). While a number of authorities have suggested that vitamin C is nephrotoxic (24,29), this notion is incorrect. In the recommended dosage, HAT therapy significantly reduces the risk of acute kidney (21,30). Currently a number of randomized controlled trial are evaluating HAT therapy in diverse populations of patients with sepsis (3,31,32). Many will consider these trials to be the definitive evidence on which to judge the benefit of HAT therapy. However, while RCT’s are considered the gold standard, it is important to realize that most RCT’s do not replicate real world experience; mainly, due to the numerous exclusion criteria, selected patient population and delay in administering the treatment. In the end, the thoughtful clinician must weigh the totality of the evidence before dismissing this safe, cheap and potentially lifesaving treatment.

Due to an unfortunate evolutionary mutation, humans have lost the ability to synthesize Vitamin C (Homo Sapiens Ascorbicus) and consequently have an impaired stress response. The inability to produce vitamin C during stress increases the vulnerability of humans to infectious disorders. Therapeutic doses of vitamin C in combination with other biologically active agents likely improves the outcomes of humans with serious infections.