Bone morphogenetic protein-7 (BMP-7) belongs to the transforming growth factor β (TGF-β) superfamily. BMP-7 was first identified as a human homolog of the bovine osteogenic proteins, and designated as osteogenic protein-1 (OP-1) (8). Experiments using knockout mouse models of the BMP-7 gene have shown that BMP-7 is indispensable in kidney development, as well as in the morphogenesis of fingers in the hind limbs, ribs, craniofacial bones, and eyes (9-11). Subsequent studies have demonstrated that BMP-7 is expressed in various tissues, such as the kidney, brain, and skeletal muscle, and is involved in apoptosis, migration, and cell proliferation during human development (12,13). In addition, several reports have demonstrated relationships between the overexpression of BMP-7 and the prognosis of the patients with various malignancies, such as gastric cancer, colorectal cancer, hepatocellular carcinoma, and melanoma (14-17). However, the association between BMP-7 expression and the clinicopathological features of thymic epithelial tumors has not been elucidated.

The specimens were obtained from 182 patients with thymic epithelial tumors who underwent surgery at Shinshu University Hospital from 1998 to 2015. Fifty specimens from patients who received preoperative chemotherapy, radiation therapy, or who underwent incomplete resection were excluded, and 132 specimens were analyzed in this study.

Using a database, we analyzed the association between the expression of BMP and clinicopathological characteristics of the patients, including age, sex, tumor size, the WHO classification, Masaoka stage, primary tumor standard uptake value max (SUV-max) on fluorodeoxyglucose positron emission tomography (FDG-PET), and the presence or absence of comorbid myasthenia gravis. This study was approved by our Institutional Research Ethics Committee (No. 542).

The specimens of epithelial thymic tumor were paraffin-embedded and cut into 4 µm sections. They were deparaffinized using xylene and ethanol. The endogenous peroxidase activity was blocked using methanol and 30% H2O2 solution for 30 min at room temperature. After protein blocking using 1% PSA/PBS for 1 h at room temperature, specimens were incubated overnight at 4 4 with a primary antibody against human BMP-7 (1:100, R&D Systems Inc., Minneapolis, MN, USA) and human Ki-67 (MIB-1, 1:100, DAKO, Glostrup, Denmark). The sections were then washed in PBS 3 times, and probed with an anti-mouse IgG antibody labelled with Histofine Simple Stain MAX-PO (Nichirei, Tokyo, Japan) for 1 h at room temperature. The sections were washed 3 times in PBS for 5 min each time and the immune complex was visualized using Histofine Simple Stain DAB (Nichirei). After washing in water, the sections were counterstained with hematoxylin and then mounted.

The immunoreactivity was scored and reviewed by 1 pathologist (UT) and 1 thoracic surgeon (KM) who were blinded to the clinical characteristics. A normal renal tubule was used as a positive control for BMP-7 staining. Because almost all specimens were stained homogenously, BMP-7 staining was classified into 4 groups based on intensity alone; 0, 1 (weak), 2 (moderate), and 3 (strong; equal to positive control). Scores of 0 and 1 were considered negative, and 2 and 3 were positive. Ki-67 expression was evaluated based on the percentage of cells showing nuclear staining among 500 tumor cells (magnification ×400). 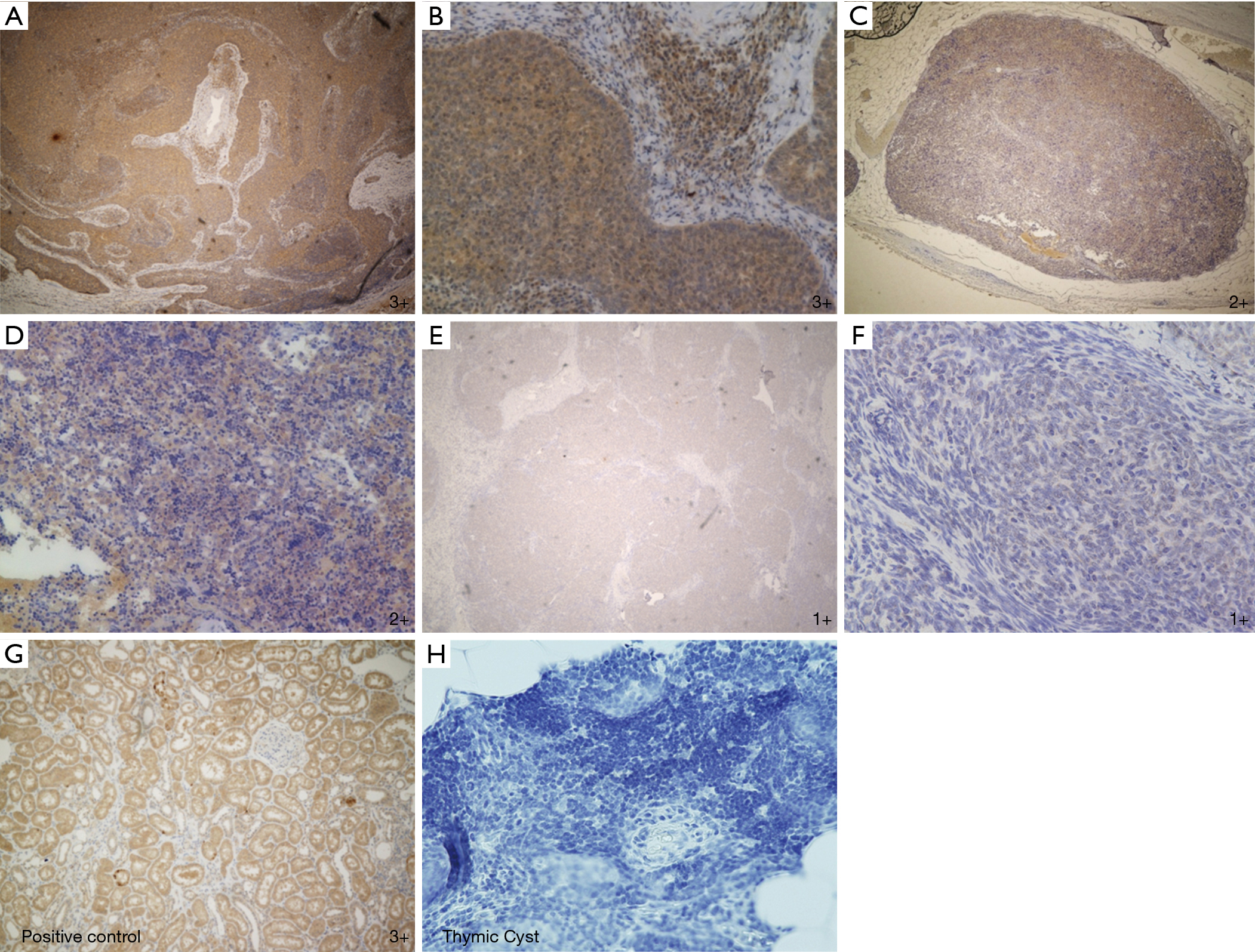 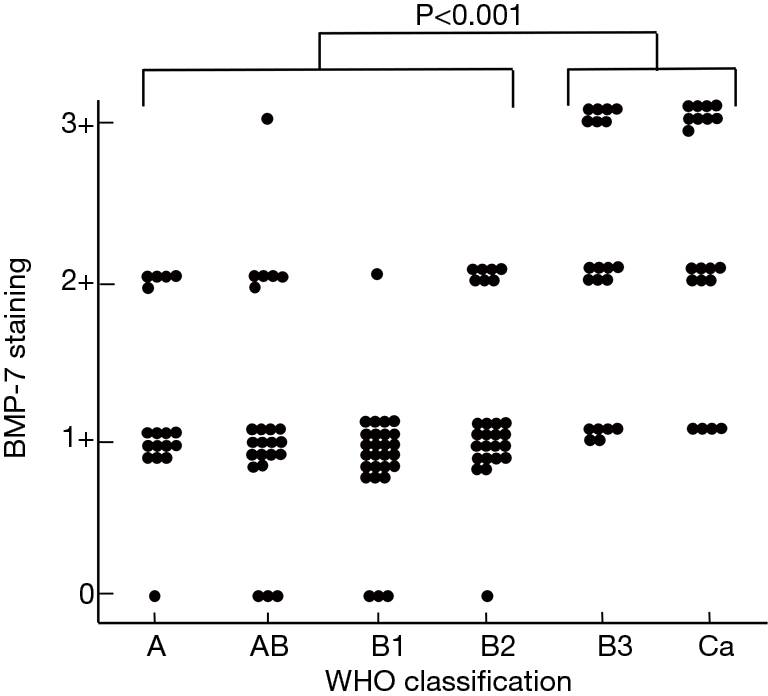 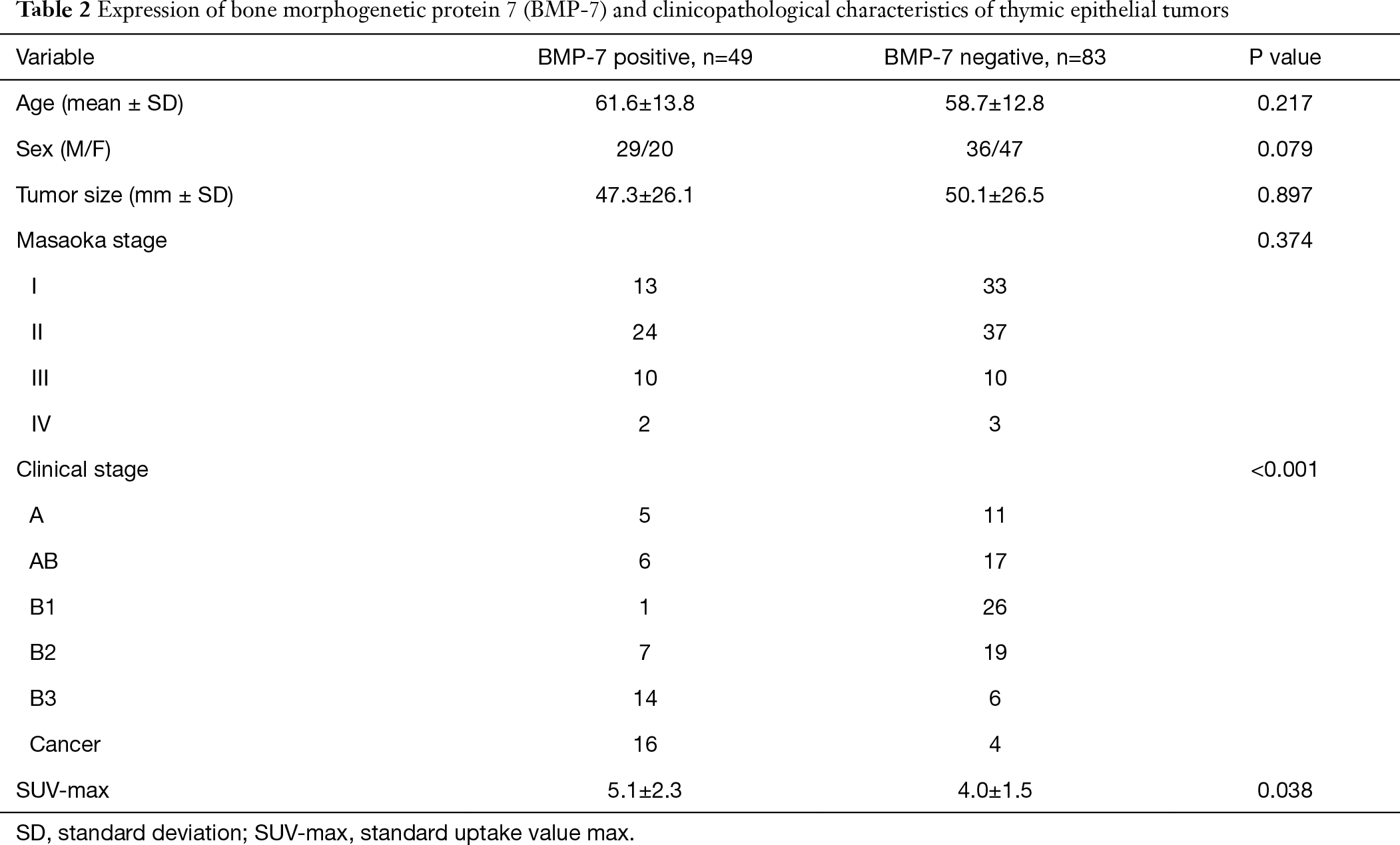 Figure 3 Comparison of Ki-67. (A) Positive ratios in thymoma B3 and thymic cancer and (B) bone morphogenetic protein 7 (BMP-7).

Figure 4A shows the OS of all patients with thymic epithelial tumors. The BMP-7 positive group demonstrated significantly poorer OS than the BMP-7 negative group (P=0.006). Figure 4B shows the Kaplan-Meier survival curve of all thymoma patients (type A-B3) and Figure 4C shows Kaplan-Meier survival curve of thymic cancer patients. A significantly poorer prognosis was observed in BMP-7 positive patients than in BMP-7 negative patients in all thymoma patients; however, no difference in OS was observed in the patients with thymic cancer. 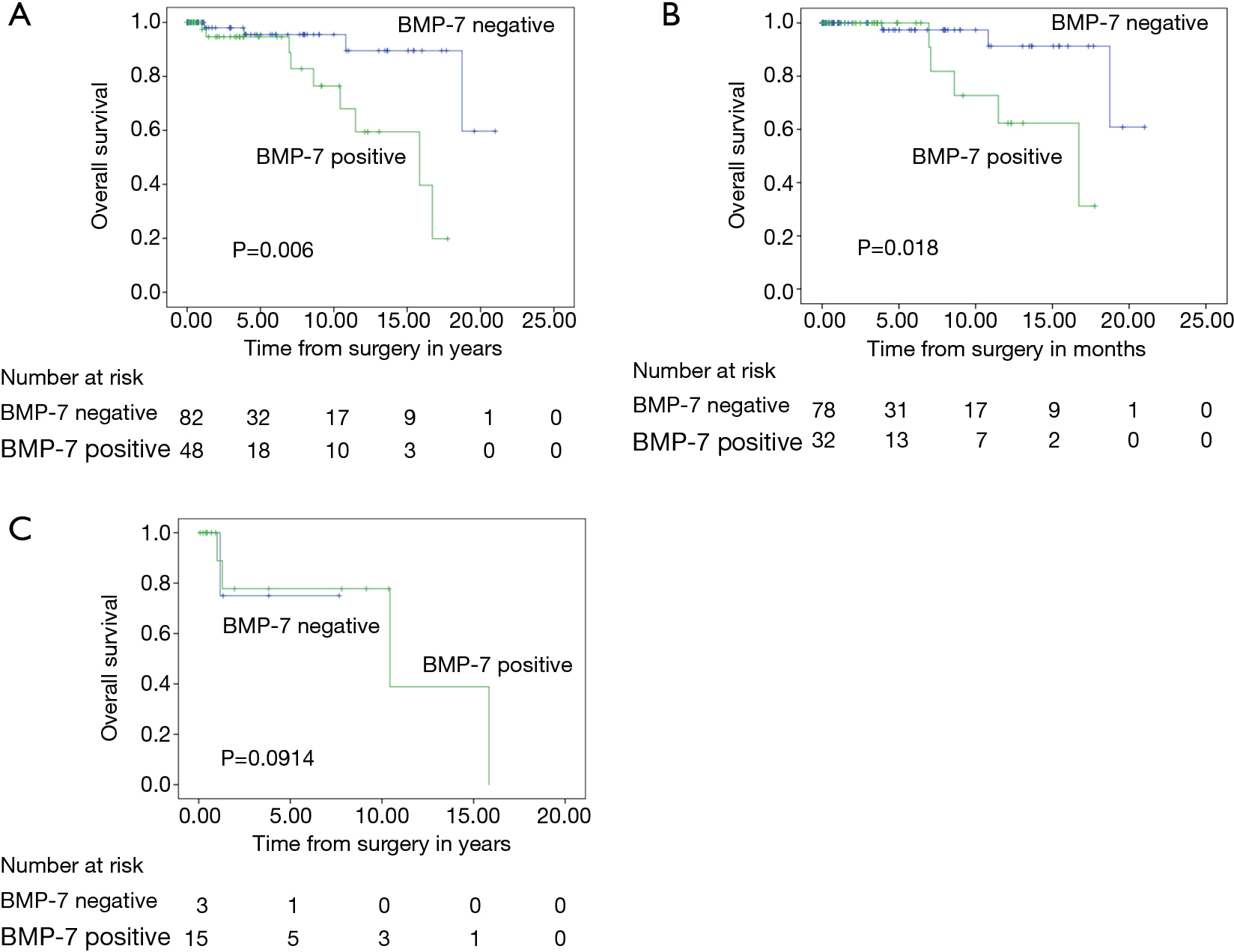 Univariate analyses showed that age, Masaoka stage, WHO classification, and BMP-7 expression were significant predictors of OS in all patients with thymic epithelial tumors. However, multivariate analyses using a Cox hazard model showed that age was the only independent prognostic factor (P=0.033) and BMP-7 staining was not an independent prognostic factor (Table 3).

Previous studies indicated that high expression of BMP-7 correlated with a poor prognosis in gastric cancer, colorectal cancer, hepatocellular cancer, malignant melanoma, and esophageal carcinoma (14-18). Recently, the relationship between the expression of BMP-7 and epithelial mesenchymal transition (EMT) was reported. Lim et al. demonstrated that expression of E-cadherin was reduced by the addition of BMP-7 in prostate cancer cells (19). They showed that BMP-induced activation of PI3K and Erk contributed to EMT morphologic conversion of the prostate cancer cells. Xu et al. demonstrated that inhibition of BMP-7 using siRNA lead to up-regulation of E-cadherin and down-regulation of MMP-9 in esophageal squamous cell lines (18). Thus, the involvement of BMP-7 in the regulation of cell migration and metastasis through modulation of EMT has been reported in various malignant tumors. In the present study, the expression of BMP-7 expression was significantly higher in type B3 thymoma and thymic cancer than in type A, AB, B1, and B2 thymomas. Furthermore, patients with BMP-7 positive tumors showed significantly poorer OS than those with BMP-7 negative tumors in all patients with thymic epithelial tumors. These findings indicate that BMP-7 might be a negative prognostic factor in thymic epithelial tumors, as well as in the other malignancies reported previously.

Ki-67 is one of the universal markers of cell proliferation, and the correlation between a high ratio of Ki-67 positive cells in the tumor and the unfavorable prognosis of the patients has been reported in various malignancies (20-25). The relationship between Ki-67 staining and thymic epithelial tumors has been reported in previous studies (7,26); however, the usefulness of Ki-67 staining in the differential diagnosis of thymic epithelial tumors has not been established. Our study demonstrated that there was a significant difference in the ratio of Ki-67 expression between type B3 thymoma and thymic cancer. In addition, tumors with high levels of BMP-7 expression showed significantly higher ratios of Ki-67 positive cells in type B3 thymoma and thymic cancer. Thus, our study indicated that BMP-7 expression could be correlated with cell proliferation and might reflect the aggressive phenotype observed in type B3 thymoma and thymic cancer.

Previous studies indicated that over-expression of BMP-7 was associated with lymph node metastasis and proliferation in melanoma (17) and was correlated with the incidence of liver metastasis in colorectal cancer (15). Thus, the expression of BMP-7 could be associated with progression and metastasis in malignant neoplasms. However, in this study, there was no relationship between the expression of BMP-7 and Masaoka stage, which classifies thymomas based on invasiveness of the tumor through the capsule into the surrounding tissue, organs, and metastases. In contrast, a significant correlation between the expression of BMP-7 and the WHO classification, which was based on the histomorphological findings, was observed in the present study. These findings suggest that BMP-7 might contribute to the biological behavior of tumor cells in thymic epithelial tumors.

In the present study, univariate analyses showed that Masaoka stage, WHO classification, and BMP-7 expression were significant predictors of OS in all patients with thymic epithelial tumors. However, none of these factors were significant predictors in multivariate analyses. These findings indicate that each classification alone was not sufficient for the prediction of the biological behavior of thymic epithelial tumors.

There are some limitations in this study. Firstly, there is no available cultured thymoma cell line by which we could analyze the role of BMP-7 in thymic epithelial cells in vitro. Secondly, as the prognosis of the patients with thymic epithelial tumors was relatively favorable and there were a limited number of patients in this study, we could not compare the recurrence rate or tumor specific death rate according to the expression of BMP-7. It is necessary to increase the number of cases and analyze the relationship between BMP-7 and other factors to establish the clinical usefulness of BMP-7 as a diagnostic biomarker in thymic epithelial tumors.

Ethical Statement: The authors are accountable for all aspects of the work in ensuring that questions related to the accuracy or integrity of any part of the work are appropriately investigated and resolved. This study was approved by Shinshu University Research Ethics Committee (No. 542).