In 1997, Kuro-o et al. published their seminal study on a previously unknown gene, the mutation of which led to a clinical syndrome that resembled aging and encompassed growth retardation, short lifespan, arteriosclerosis, ectopic calcification, osteoporosis, skin atrophy and emphysema in mice homozygous for the transgene (1). Since the serendipitous discovery of this gene, ingeniously named Klotho after one of the three Fates in ancient Greek mythology (the Greek goddess who spins the thread of life) we have come a long way in defining its role and function although, several aspects of the physiology and pathophysiology still need to be further elucidated. The main transcript of this gene, a-Klotho, has been regarded as the anti-aging protein, particularly because the overexpression of this has been initially related to extended lifespan in mice (2). Of note, it was the discovery of Klotho that led to the identification of novel endocrine pathways and an unexpected link between aging and mineral metabolism. Mineral metabolism dysregulation and vascular calcification, a major finding in aging (3) and independent predictor of cardiovascular mortality and morbidity (4), are all hallmark characteristics in patients with chronic kidney disease (CKD), a well-established state of premature aging (5,6). It was further documented that levels of circulating a-Klotho diminish with worsening renal function since early in the process (7). Therefore, it was suggested that a-Klotho plays a role in the process of vascular calcification in patients with CKD although, data are relatively scarce, equivocal and even conflicting (8,9). In this study we sought to clinically explore the relationship between circulating a-Klotho levels and severity of calcification in the coronary arteries and the aortic valve in patients with distinctly different stages of CKD, namely between stage V (end-stage renal disease) and stage III CKD.

This was a cross-sectional study. We enrolled 60 adult patients with CKD who received care at AHEPA University Hospital, Thessaloniki, Greece, between January 01, 2016 and December 31, 2017. Patients with (I) active cancer; (II) systemic inflammatory or granulomatous disease; and (III) primary hyperparathyroidism were excluded. Group 1 included 30 patients with end-stage renal disease, CKD stage V (eGFR <15 mL/min/1.73 m2) under renal replacement therapy in the form of regular intermittent hemodialysis. Group 2 included 30 outpatients (OP) with CKD stage III (eGFR ≥30, <60 mL/min/1.73 m2) with stable eGFR for the last at least 3 months prior to enrollment. For the calculation of eGFR the 4-variable, abbreviated modification of diet in renal disease (MDRD) study equation (eGFR =186× serum creatinine−1.154 × age−0.203 × 0.742 if female) was used (10,11).

Clinical data were collected through the primary physician, the Hospital Medical Records and, by directly interviewing the patients. Baseline demographic and clinical data were recorded as follows: age, gender, primary kidney disease, body mass index, blood pressure, medication history, and comorbid diseases. For laboratory measurements, blood samples were drawn in the morning after an overnight fast of at least 8 hours for the OP group. For all patients in the CKD-V group, dry weight was used as reference weight. Blood samples were drawn at the beginning of the hemodialysis session and, the hemodialysis session in the middle of the week was selected for the study purposes.

After centrifuging whole blood at 3,000 rpm for 10 minutes at 4 °C, supernatant serum was immediately stored in aliquots in deep freeze (−80 °C) for future analysis. No freeze-thaw-freeze cycle of the stored serum samples occurred at any point of the study. Human soluble a-Klotho was measured using a commercially available for research use, solid phase sandwich enzyme-linked immunosorbent assay (ELISA) kit (IBL International GmbH, Hamburg, Germany). It has been previously tested, and the intra-assay and inter-assay coefficient of variation (CV) were <10% (12). The serum soluble α-Klotho levels with this assay range between 93.75 and 6,000 pg/mL, cross reactivity with human a-Klotho is 100% (specificity) and sensitivity is as low as 6.15 pg/mL. Serum parathyroid hormone (PTH) was assayed by a double (‘sandwich’) electro-chemiluminescence immunoassay (Roche Diagnostics GmbH, Mannheim, Germany); intra-assay and inter-assay CV are <10% and serum PTH levels with this assay range between 5.50 and 2,300 pg/mL. Serum 25 hydroxyvitamin D [25 (OH) D] was analyzed with the radioimmunoassay method (DIAsource ImmunoAssays S.A., Belgium); intra-assay and inter-assay CV are <10% and detection limit is 1.5 ng/mL. Serum calcitonin was analyzed by a double (‘sandwich’) immunoradiometric assay (Institute of Isotopes Ltd., Budapest, Hungary); intra-assay and inter-assay CV are <10%, serum calcitonin levels with this assay range between 0 and 2,000 pg/mL and sensitivity is 1.5 pg/mL.

All patients had a non-contrast cardiac multi-slice computed tomography (MSCT) using a 128-slice scanner (CT Optima 660, GE Healthcare) on the day or within a week of the blood samples draw. Agatston score was used for the quantitative evaluation of the degree of calcification of the coronary arteries and aortic valve (13). Prospective electrocardiogram triggering (75% of R–R interval) was used with a slice thickness of 2.5 mm. The scan range extended from the level of clavicles to the diaphragm. The following scanning parameters were applied: collimation width: 32×0.625 mm; rotation time: 330 ms; tube voltage: 120 kV; and maximum effective tube current: 64 mA. Image reconstruction was gated retrospectively to 75% of R–R interval. MSCT images were reconstructed using a cardiac standard filter with a slice thickness of 2.5 mm. The slice thickness of the images reconstructed and reviewed was 0.625 mm for optimal isotropic imaging. MSCT data sets were transferred to an offline workstation (AW workstation, GE Healthcare) for image analysis. Aortic valve calcium score and coronary arteries calcium score were determined 2-dimensionally by using the calcium score data sets on the workstation and, defined by Agatston units (AU). The SmartScore 4.0 (General Electric Company, France) software package was used for the quantification of Agatston score of the coronary arteries and the aortic valve. The aortic valve calcium score area of interest comprised the valve cusps and aortic annulus. Total coronary calcium score was determined by summing the individual lesion scores of each of the main coronary arteries. All MSCT images were analyzed by 2 independent, appropriately trained and experienced physicians. In the case of different observer readings, a consensus reading was performed and used in the final analysis.

We described continuous variables as median (25th–75th percentile) and categorical variables as N (%). We compared variables between groups using the nonparametric Mann-Whitney U test for continuous and Fisher’s exact test for categorical variables. We examined bivariate correlations of a-Klotho levels with clinical variables and calcification scores using the Spearman correlation coefficient. To identify determinants of a-Klotho levels, we log-transformed a-Klotho levels because of lognormal distribution and used stepwise linear regression with probability to remove the variable >0.1. To identify determinants of coronary and aortic calcification, we log-transformed the corresponding calcium scores, assuming a value of 0 (log-transformed 1) for absent calcium and, used stepwise linear regression as above. Because of the small sample size, all regression estimates, and confidence intervals were calculated with resampling (jackknife) to ensure robust variable selection and stable estimates. STATA 14.2 (StataCorp LP, College Station, TX, USA) software package was used for all analyses.

The study adhered to the tenets of the declaration of Helsinki, as revised in 2013, and it was approved by the Ethics Committee of AHEPA University Hospital, Aristotle University of Thessaloniki. All patients provided written informed consent prior to enrollment. The study is registered on ClinicalTrials.gov (Identification number NCT03858413). 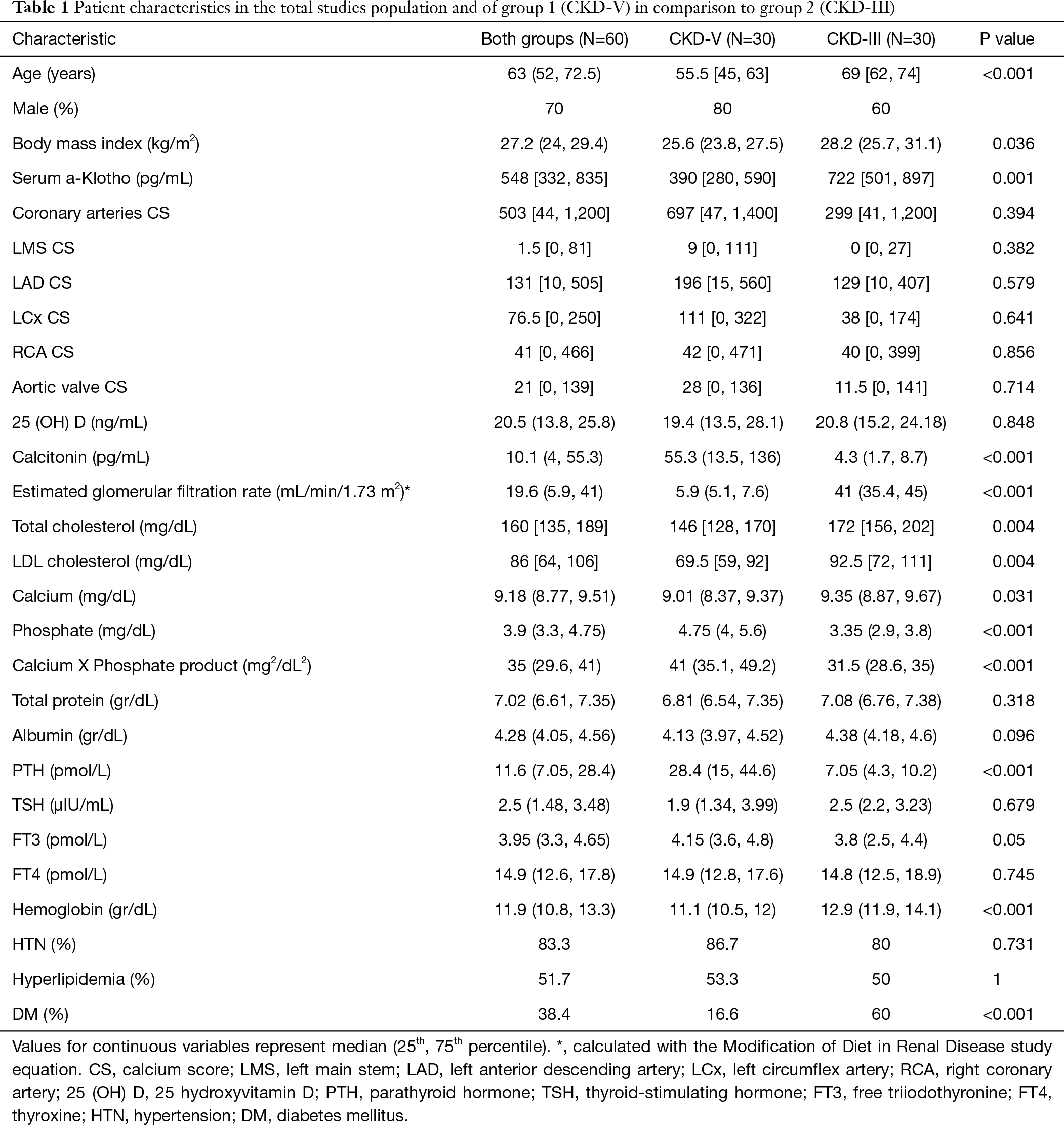 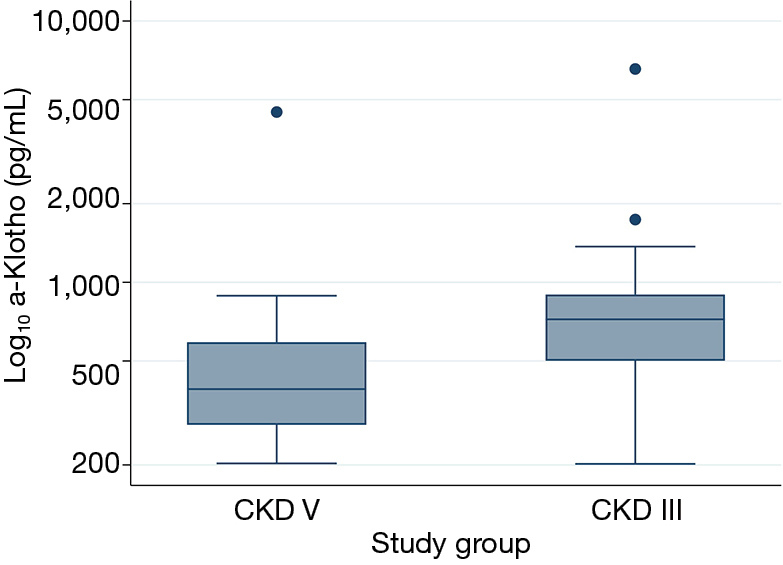 In a multivariate analysis including clinical and laboratory covariates, serum calcitonin, FT3 and FT4 were independently associated with serum a-Klotho (Table 2). In bivariate analysis, serum a-Klotho was negatively correlated with calcitonin (P=−0.508, P<0.001), PTH (P=−0.310, P=0.016) and phosphate (P=−0.302, P=0.019) (Figure 2). No correlation was found between a-Klotho levels and calcium score in the coronary arteries or the aortic valve. 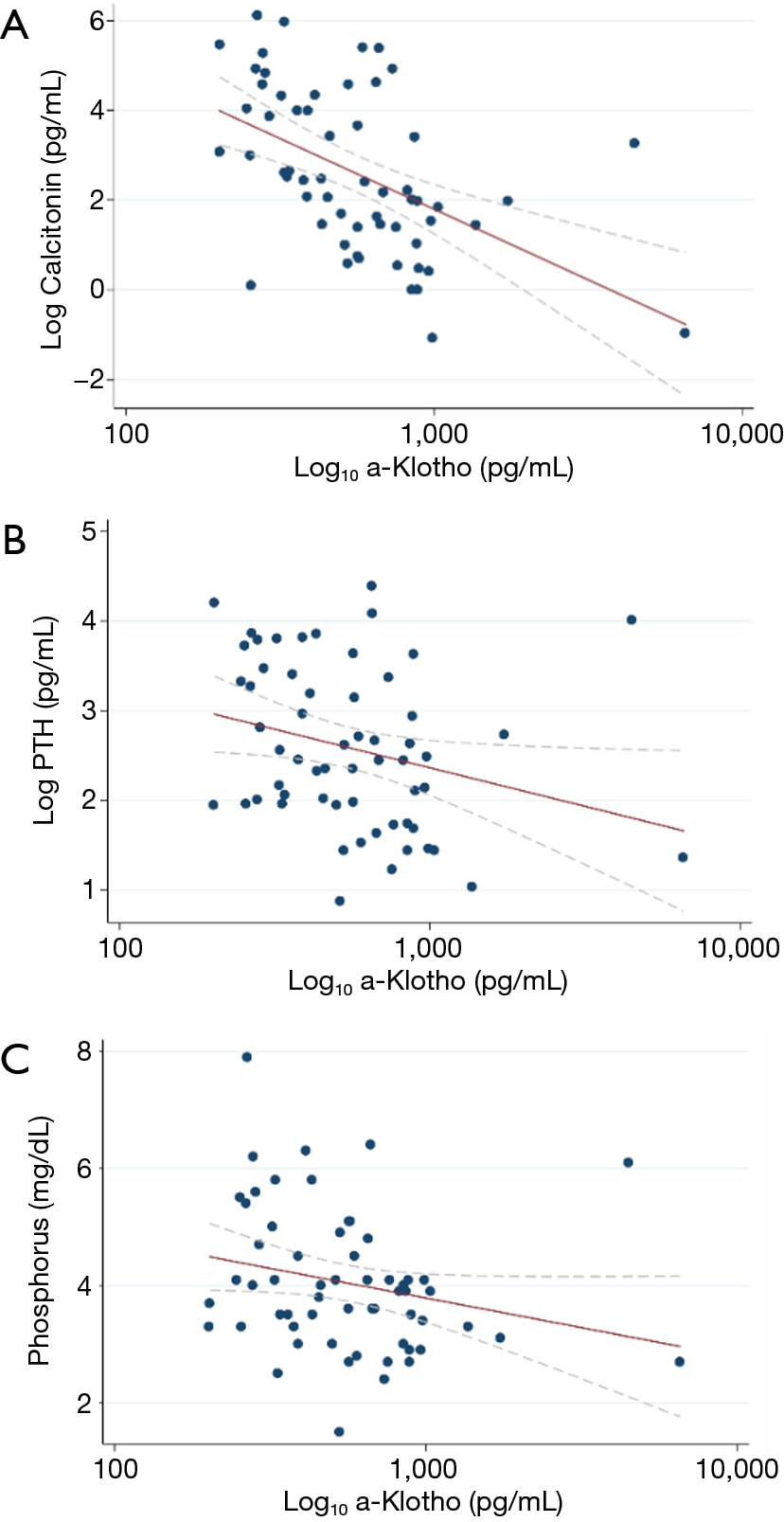 Figure 2 Correlation tests of serum a-Klotho with: (A) Calcitonin, (B) PTH and (C) Phosphat.

Klotho is part of the FGF-23/Klotho, 1,25-dihydroxyvitamin D or calcitriol [1,25 (OH)2 D] and PTH axis and have a central role in regulating the mineral homeostasis, namely, regulate the calcium and phosphate concentration within very strict and narrow ranges and in a very delicate balance to commensurate with the body demands. The main type of Klotho is a-Klotho, a type I, single-pass transmembrane protein of 1,012 amino acids in humans (1). Membrane Klotho is an obligatory co-factor for FGF-23, a 251-amino acid hormone predominantly produced from osteocytes and osteoblasts during active bone remodeling (14), and increase urinary phosphate excretion and suppresses synthesis of 1,25 (OH)2 D. Apart from the membrane form of a-Klotho, there is the circulating form which is a product of shedding from proteases and secretases (15,16). This circulating form has been shown to have hormonal properties independent from FGF-23.

This current study confirms previous knowledge that circulating a-Klotho levels deplete as renal function declines (22-25). Furthermore, a-Klotho levels in the studied population were associated with phosphate, PTH and calcitonin which is in accordance with previous studies (23). a-Klotho has a central role in the regulation of mineral homeostasis and hence, phosphate levels (as a result of the complex regulatory axis), PTH (as a regulatory hormone for calcium and phosphate levels homeostasis) and calcitonin (as a regulatory hormone for calcium levels homeostasis) were associated with circulating a-Klotho levels.

By contrast, there was a statistically non-significant difference in the calcification severity between the two groups. This could be postulated to be explained by the severity of CKD in the CKD-III group as, the majority of the participants were in stage IIIb CKD (eGFR ≥30, <45 mL/min/1.73 m2), namely, renal function in those participants was moderately to severely impaired rather than mildly to moderately impaired and closer to CKD IV and V stages.

Our study has several limitations. This was a cross-sectional study and as such, no temporal causation can be safely inferred. As patients were randomly selected, the significant difference in age between the two groups may account to some extent for the non-significant difference in calcification severity in the coronary arteries and the aortic valve. The subgroup of CKD stage V included younger patients and, the calcification severity was not different compared to patients with CKD stage III. It could be postulated that if patients were age-matched there could have been a significant difference in the extent of calcification. We believe that future studies trying to shed more light on the differential severity in calcification should include more patients to enhance power and a more diverse CKD cohort in an effort to include participants within all different stages of CKD severity. In addition, long-term follow-up of these patients would provide evidence of temporal association between circulating a-Klotho levels and calcification in the heart vasculature. Future studies should age-match the population of the sub-groups to exclude age as a confounding factor. Furthermore, all participants were of Caucasian ancestry secondary to the race distribution at the site of the study. Therefore, no conclusions can be drawn for patients with CKD of Black or other race.

In conclusion, circulating a-Klotho is found to decrease with worsening CKD severity but no correlation was found between the levels of a-Klotho and severity of coronary arteries and aortic valve calcification.

Ethical Statement: The authors are accountable for all aspects of the work in ensuring that questions related to the accuracy or integrity of any part of the work are appropriately investigated and resolved. All procedures performed in this study were in accordance with the ethical standards of the institutional and national research committee (ClinicalTrials.gov Identification number NCT03858413) and with the Helsinki Declaration as revised in 2013.