Lung cancer is a malignant tumor that possesses high rates of morbidity and mortality, with more than 200,000 patients diagnosed with lung cancer in the United States each year (1). Over 80% of all lung cancer is of the non-small cell lung cancer (NSCLC) subtype. Surgery plays a dominant role in the management of stage I, II and some IIIA NSCLC, with lobectomy being the golden standard. However, in certain circumstances such as a centrally located tumor and great vessel invasion, a pneumonectomy would be necessary to achieve radical resection of the lesion. The surgery extent of pneumonectomy for NSCLC include the anatomic resection of hemi-pulmonary tissue and pulmonary artery, vein and main bronchus, as well as systematic lymph node dissection. Dr. Graham reported the first pneumonectomy for lung cancer in the Journal of American Medical Association (JAMA) in 1933 (2). Since then, lung cancer treatment has been optimized to a combination of surgery, chemotherapy and radiotherapy. However, pneumonectomy could lead to severe damage of pulmonary function, hemodynamic change and further decreased cardiac function (3,4). Therefore, careful consideration should be taken for patients that are candidates for pneumonectomies.

A total of 132 consecutive patients who presented to Peking Union Medical College Hospital from January 2007 to December 2016 and received pneumonectomy were included in this study. The exclusion criteria were as follows: (I) benign disease, including bronchiectasis and a destroyed lung; (II) lung malignant disease that were not NSCLC; (III) undefined cancers; (IV) distant metastasis; (V) metastatic lung cancer. According to the exclusion criteria, 8 patients undergone pneumonectomy with benign diseases, 16 patients had small cell lung cancer (SCLC), 3 patients had neuroendocrine carcinoma (without a more concrete pathological type), 2 patients had residual lung resection due to recurrence, 3 patients had distant metastasis and with uncontrollable massive hemoptysis. All of these 32 cases were excluded and 100 patients were finally included in the study.

The indications and procedure of pneumonectomy

Pneumonectomy is inevitable if there is direct tumor invasion to the main pulmonary artery or interlobar pulmonary artery, or when the lymph nodes surround the interlobar artery or the root of the pulmonary lobar/segmental artery, or when the lesions invade and cross the adjacent lobes, or when the lesions in the bronchial cavity exceed the limits of lobectomy and sleeve lobectomy. Pneumonectomies were started with a posterolateral incision, followed by a comprehensive exploratory thoracotomy to ensure that the tumor could be resected completely and that the goal of complete resection was achievable. It was essential to determine if the pulmonary artery could be released safely after preliminary dissociation of pulmonary hilum. If a complete resection was not possible without opening the pericardium, the exposure of intrapericardial pulmonary artery and vein is necessary. A lymphadenectomy of the mediastinal lymph nodes was an integral part of the procedure. Bronchial stumps were sometimes covered with an intercostal muscle flap.

The age, sex, side, size, pathological type, neoadjuvant therapy, stage and whether adjuvant therapy was performed were collected with all 100 patients undergoing regular follow-up. All of the patients receiving neoadjuvant therapy were diagnosed histopathologically through biopsies and the diagnosis of lymphatic metastasis was confirmed by bronchoscopic biopsy or positron emission tomography (PET) [the standardized uptake value (SUV) threshold of 2.5 is generally used to designate a scan as positive] when pathological proof was not accessible. The lung cancer stage was determined in accordance to the eighth edition of Union for International Cancer Control (UICC). The data were collected and further analyzed to evaluate prognosis. The research was approved by the institutional review board and written consent was obtained from each patient.

Patients undergoing pneumonectomy with N2 lymphatic metastasis were filtered to analyze the effect of neoadjuvant therapy to survival.

Statistical analysis was performed using EXCEL and SPSS 24.0. Survival was calculated using the Kaplan-Meier method and was statistically evaluated by the log-rank test. The COX hazard proportion model was used to determine survival through multivariate analysis. A P value of less than 0.05 was considered significant.

Based on the exclusion criteria, 100 patients who received pneumonectomy were analyzed (Table 1), including 89 males (89.0%) and 11 females (11.0%), with the average age of 57.14 (ranged from 26 to 77) years old. Squamous cell carcinoma was more common than adenocarcinoma, while left-sided pneumonectomies’ were more common than right-sided pneumonectomies. Mediastinal node metastasis was confirmed by histopathology in 29 patients (87.9%) and by PET in 4 patients (12.1%) (4 of these patients did not receive histopathological diagnosis given their high risk of vascular injury) prior to neoadjuvant therapy. 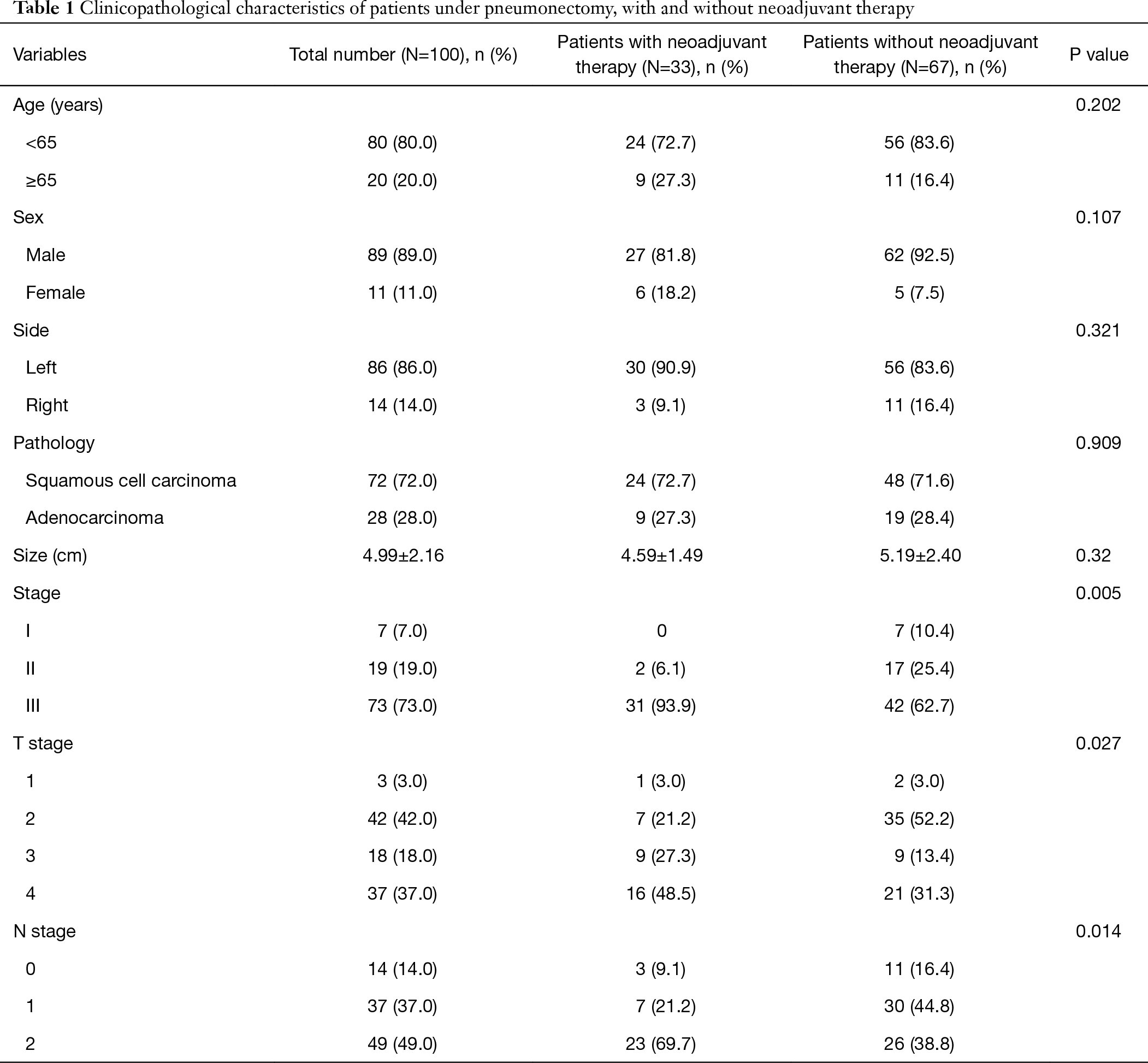 Table 1 Clinicopathological characteristics of patients under pneumonectomy, with and without neoadjuvant therapy
Full table

All 100 patients underwent an anatomic pneumonectomy and systematic lymphadenectomy, with no extended resection. The median survival time was 36 months. One patient received an R1 resection and received post-operative chemoradiotherapy and a follow-up period of 83 months, and this patient was still alive. The 5-year overall survival (OS) rate was 32.3%. The 5-year OS time was not statistically different between patients elder than 65 years old and patients younger than 65 years old (P=0.231). Likewise, no statistically significant differences were found for 5-year OS amongst different genders, tumor sizes, tumor sides and T stage. Squamous cell carcinoma possessed a better 5-year OS than adenocarcinoma (36.5% vs. 20.4%, P=0.039). The 5-year OS rates of stage I, II and III were 71.4%, 32.4% and 28.7% (P=0.017), respectively. The OS rates of lymph node stage 0, 1 and 2 were 63.5%, 35.3% and 19.6% (P=0.000), respectively. There was no difference in 5-year survival rates between patients with and without neoadjuvant therapy (39.8% vs. 29.2%, P=0.444), so was adjuvant therapy (P=0.543). In the multivariable analysis, pathology and N stage were independent predictors of 5-year OS (Table 3). The 30-day mortality was 4.0%, resulting from bronchopleural fistula, acute respiratory distress and cerebral infarction.

The survival analysis of patients with N2 lymphatic metastasis

Table 4 Five-year survival for patients with N2 lymphatic metastasis who underwent pneumonectomy for NSCLC, with and without neoadjuvant therapy
Full table 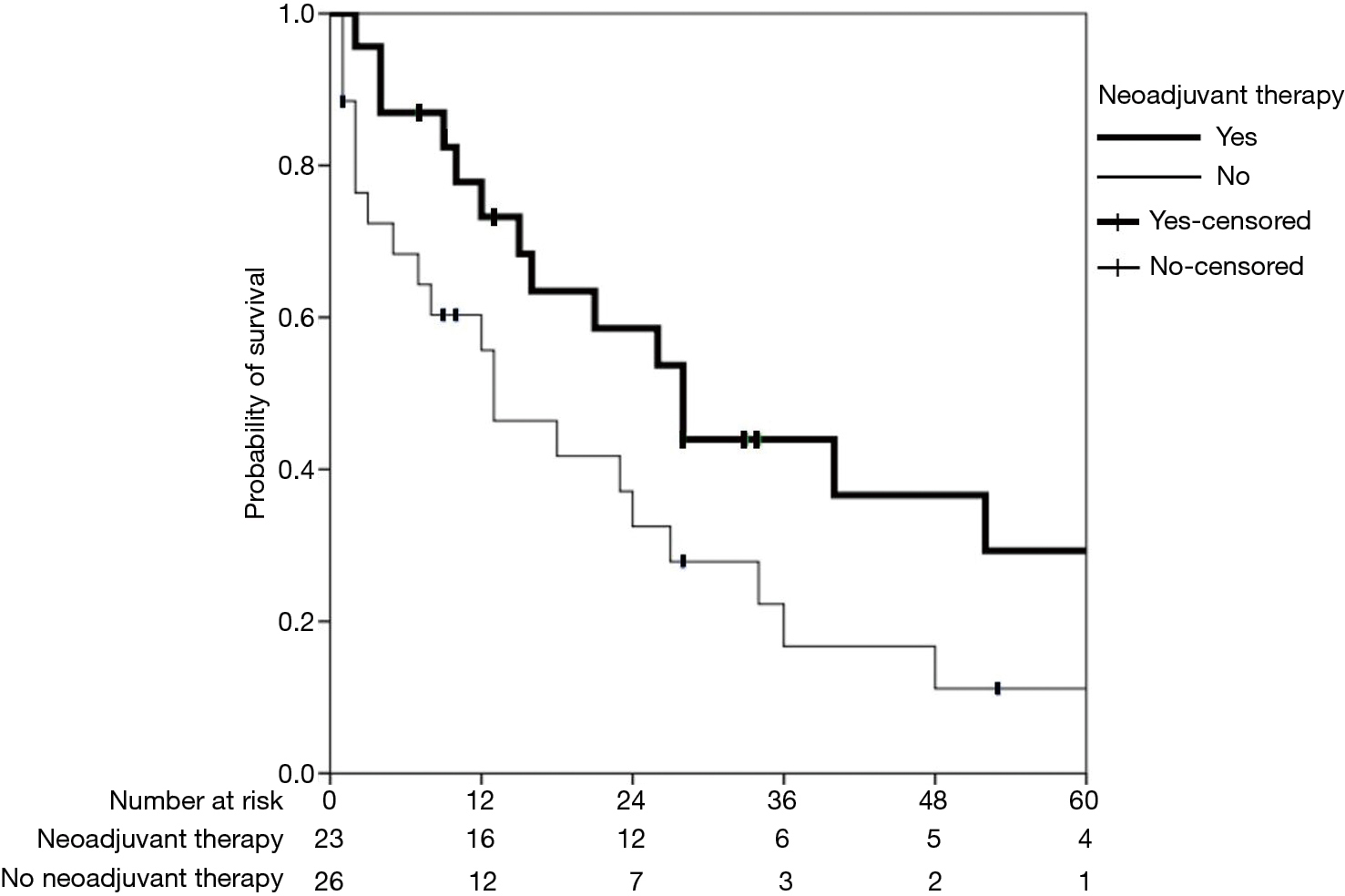 Pneumonectomy is a rare procedure in pulmonary surgery with high perioperative morbidities and post-operative mortality, such as acute loss of pulmonary function and increasing respiratory and circulatory load, and even death. Lobectomy with or without bronchoplasty or arterioplasty, or sleeve lobectomy is the preferred choice in contrast to pneumonectomy in central or locally advanced lung cancer, such as tumor invasion of the main pulmonary artery or interlobar pulmonary artery, or lymph node invasion of the interlobar artery or the root of the pulmonary lobar/segmental artery, or invasion of lesions to adjacent lobes. However, the procedure of pneumonectomy is often the most suitable mode of surgery in cases where tumor or lymph node invasion exceed the limits of lobectomy or sleeve lobectomy. From January 2007 to December 2016, we performed 132 pneumonectomies accounting for 1.6% of the total number of operations, 111 sleeve resections accounting for 1.4% of operations and 148 lobectomies with plasty of bronchus or artery accounting for 1.80% of operations. The percentage of both pneumonectomy and sleeve resections decreased gradually with increasing popularity of pulmonary resections, with over 2,000 pulmonary resections performed by our center in 2019.

Age is an important predictor for long-term survival among NSCLC patient who have received pneumonectomy. The long-term survival shortens with increasing age, especially in stage I NSCLC (12). The cut-off age of 70 years old was advised most often to evaluate the prognosis of NSCLC under pneumonectomy (13,14). In our institute, there were only 8 patients (8.0%) elder than 70 years old and no perioperative mortality and long-term survival differences were observed. When 65 years were adopted as cut off value, the number of elderly patients was 20 (20.0%). According to the Kaplan-Meier curve, elder patients tended to show worse prognosis but without statistical difference (P=0.231). We failed to prove whether the age was a predictor of poor prognosis, possibly due to the small samples of elderly patients in our study. Although the cut-off value of 65 years increased the numbers of elderly patients, the cut-off value predicting prognosis might not be 65 years. Therefore, patients should not be denied pneumonectomy solely due to elder age and should be carefully considered in cases where a pneumonectomy was indicated.

However, all of our 100 patients received pneumonectomy, and the 30-day mortality is only 4.0%, which is less than the 30-day mortality of the study INT0139. Based on this observation, we conclude that patients undergoing pneumonectomy could benefit more from neoadjuvant therapy and achieve a better long-term survival, in contrast to those who did not receive neoadjuvant therapy. In our institute, among those 23 patients with NSCLC and N2 lymphatic metastasis who underwent neoadjuvant therapy, 6 patients (26.1%) were observed to be downstaged but had no 5-year OS benefit than those without lymph node downstage (P=0.473). However, Paul et al. previously demonstrated that N2 lymph node downstage was an important predictor of prognosis (21). We failed to demonstrate this, but proved the efficacy of neoadjuvant therapy in patients with N2 lymphatic metastasis. This may be attributed to the small sample size of our study.

Pneumonectomy sometimes is inevitable and necessary in certain type of NSCLC with acceptable perioperative mortality and long-term survival. For patients with NSCLC undergoing pneumonectomy, pathological subtype and nodal stage were independent predictors of OS. When pneumonectomy was inevitable in patients with NSCLC and N2 lymphatic metastasis, a better long-term survival could be achieved among patients receiving neoadjuvant therapy compared to those without neoadjuvant therapy.

Conflicts of Interest: All authors have completed the ICMJE uniform disclosure form (available at http://dx.doi.org/10.21037/jtd.2020.02.33). The authors have no conflicts of interest to declare.

Ethical Statement: The authors are accountable for all aspects of the work in ensuring that questions related to the accuracy or integrity of any part of the work are appropriately investigated and resolved. This retrospective study was performed under a waiver of authorization approved by the Institutional Review Board of Peking Union Medical College Hospital, Beijing, China (No. S-K1049).