Lung cancer accounts for over 142,000 deaths in the United States each year. Non-small cell lung cancer (NSCLC) represents 85–90% of all lung cancers (1). To date, the preferred treatment method for early stage NSCLC involves complete surgical resection with or without adjuvant chemotherapy. However, in patients who are poor surgical candidates or refuse surgery, definitive stereotactic body radiotherapy (SBRT) is the current standard of care (2). Several studies have demonstrated excellent local control rates (>90% at 2–5 years) after SBRT for early stage NSCLC (3,4).

Despite excellent local control rates with SBRT, long-term survival for these patients remains suboptimal, with 5-year overall survival (OS) rates of 40–60% (4,5). Besides TNM staging, histology and various demographic factors (e.g., age, gender, and performance status), there are few useful clinical prognostic factors to determine which patients will have poorer outcomes for NSCLC, specifically in terms of OS and likelihood of recurrence.

Several groups have shown the importance of tumor volume (TV) when assessing patients for radiotherapy (RT). In fact, it has been suggested that TV has more prognostic value than TNM tumor stage for NSCLC (6). More recently, several studies have quantified tumor response to radiation by assessing tumor volume reduction (TVR) and have found that TVR correlates with clinical outcomes (7-10). For example, Lee et al. demonstrated that TVR is a significant prognostic factor for patients with nasopharyngeal cancer treated with definitive RT and could be used as a potential indicator for early therapeutic modifications during the course of RT (7).

For early stage NSCLC treated with SBRT, cone beam computed tomography (CBCT) imaging is routinely performed before each treatment fraction. To date, however, their primary purpose in early stage NSCLC has been for tumor visualization and alignment, and not for evaluating TV or assessing prognosis. In this study, we sought to evaluate the predictive value of TVR, as measured by CBCT, over the course of treatment.

Using an institutional review board-approved protocol, we retrospectively reviewed the records of patients treated with SBRT for node-negative, treatment naïve stage I/II NSCLC at two academic centers between 2011 and 2014. All patients were discussed by an interdisciplinary team typically consisting of radiation oncology, medical oncology, thoracic surgery, and pulmonology. SBRT was typically recommended for patients with inoperable tumors or because of comorbid conditions. Some patients preferred SBRT over surgical resection. All patients were staged with a chest computed tomography (CT) scan and positron emission tomography (PET)/CT scan. The risks/benefits of mediastinal staging (with endobronchial ultrasound) for each patient were discussed in a multi-disciplinary tumor board. The following factors were considered: PET/CT and CT chest findings, tumor location, patient comorbidities, and patient preference.

During SBRT simulation, patients were placed in the supine position with arms up using full body customized immobilization. Patients underwent a 4-dimensional CT scan where breathing coaching and retrospective gating were performed. The 4-dimensional CT scan with 8–10-phase CT scans through the breathing cycle permitted the delineation of an internal target volume (ITV) on the CT average scans. A 5-mm margin was applied geometrically to the ITV to generate the planning target volume. All patients received daily CBCT before each treatment fraction. Patients received curative-intent radiation therapy, typically to 50–54 Gy over 3–5 fractions.

We recorded patient demographics, pathology, clinical stage of lung cancer (based on the American Joint Committee on Cancer 7th edition criteria), treatment information, and follow-up data including first site of recurrence, time to recurrence, and survival for the patients in our study cohort.

We manually generated the CBCT contours for this study. In order to maintain consistency, lung window settings were used for all images, and at least two study investigators, who were blinded to the clinical outcomes, reviewed the contours. Additionally, contouring protocols between the two institutions were discussed and standardized to further ensure consistency. We contoured tumor masses on successive slices along the z-axis of a single CBCT image set. This was then used to obtain a 3-dimensional representation of the primary tumor and that allowed us to calculate the TV. This procedure was repeated for each pre-fraction CBCT image set for each patient, resulting in TV values over the course of therapy. We defined TVR based on the TV before the first fraction (TV1) and the TV before the last fraction (TV2):

The primary endpoint was OS, with secondary endpoints of progression-free survival (PFS), time to local recurrence, time to regional recurrence, time to locoregional recurrence, and time to distant recurrence. We measured all endpoints from the start of radiation therapy to the event of interest or last known follow-up. A PFS event was defined as death due to any cause or any recurrence. We stratified patients into two groups: those with TVR ≥ median value (high TVR), and those with TVR < median value (low TVR). We assessed differences in time-to-event outcomes between TVR strata using the Kaplan-Meier method and log-rank test. All hypothesis tests were two-sided, and we defined P<0.05 as statistically significant and P<0.10 as a trend toward significance. All analyses were performed using SAS 9.4 (Cary, NC, USA).

Association between TVR and either OS or PFS 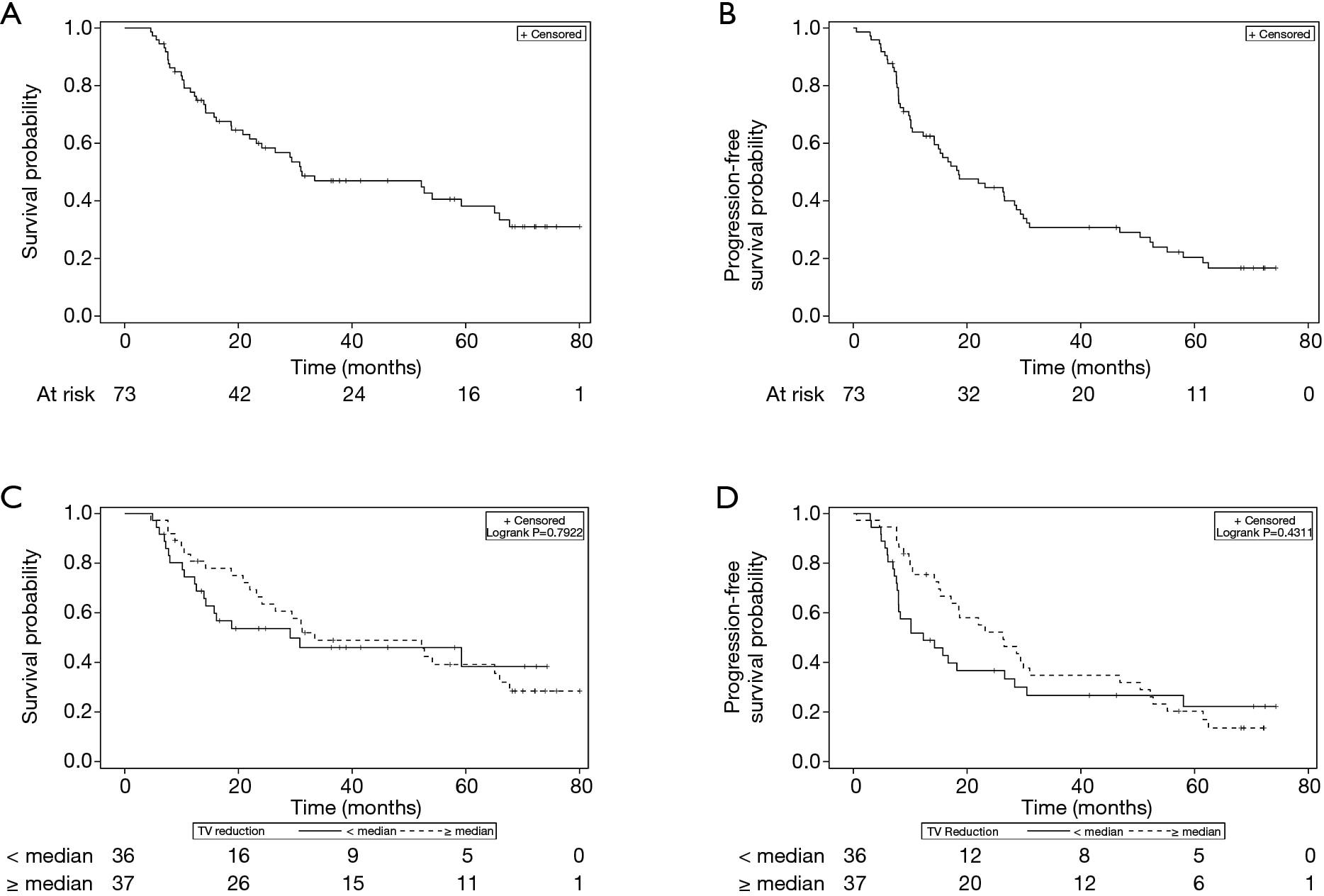 Figure 1 Kaplan-Meier curves of overall survival (A,C) and progression-free survival (B,D) of the entire cohort (A,B) and stratified by tumor volume reduction above vs. below the median value of 10.1% (C,D). 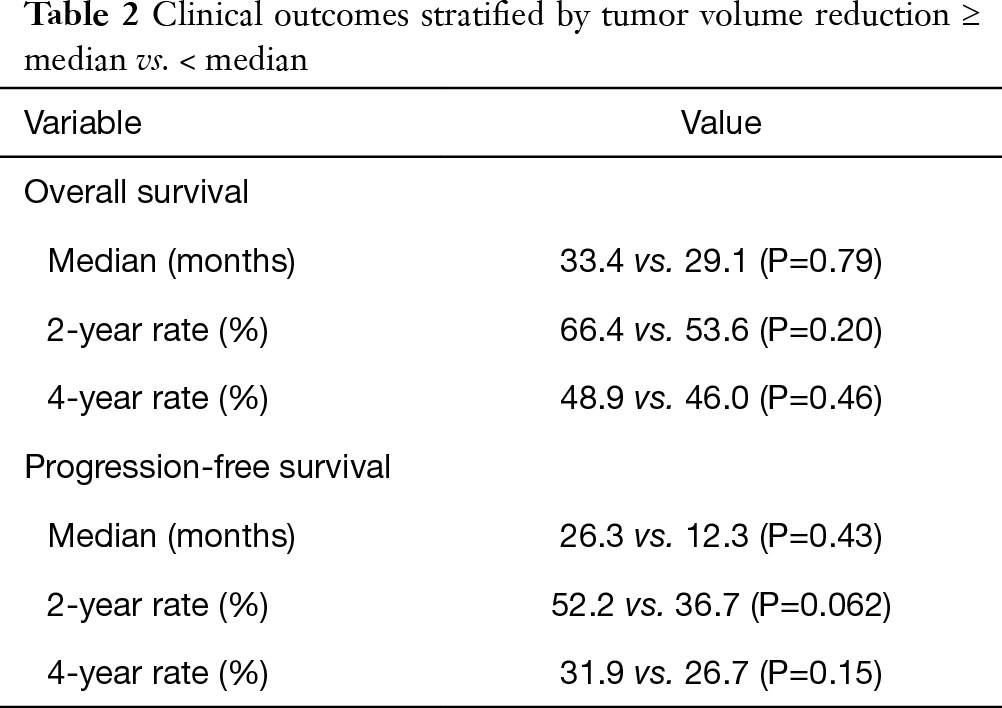 Association between TVR and tumor recurrence

While several groups have studied the association between TVR and prognosis, this is the first analysis of inter-fraction tumor response to SBRT and assessment of its association with clinical outcomes. Taken all together, we were not able to demonstrate that TVR, as measured by daily CBCT, is a reliable predictive imaging marker for stage I/II NSCLC treated with SBRT. In particular, we found no significant association between TVR ≥10.1% (the median value) and OS, PFS, or tumor recurrence. On an exploratory analysis, we analyzed the data using various TVR cut-points (terciles, quartiles, etc.), with similar results (data not reported).

Traditionally, tumor shrinkage for early stage NSCLC has been assessed at the first follow-up CT scan, usually 2–3 months post-SBRT, as there may be some lag time in TVR. However, we showed that over the course of SBRT, the median TVR for our cohort was 10.1%, with 71/73 tumors experiencing a positive reduction. We believe a TVR of 10.1% is significant, and could have additional clinical relevance if correlated with clinical outcomes.

Although not statistically significant, patients with a TVR ≥ median displayed a trend toward superior 2-year PFS, a trend that diminished with longer follow-up. This suggests that TVR may have predictive value for the first 2 years after treatment but is less useful after that. Similarly, a prospective study of 509 patients with stage I–III NSCLC found that TV provides additional prognostic information over the T and N stages only within the first 18 months after treatment, but not necessarily thereafter (11). The impact of TVR on clinical outcomes may diminish with time, similar to that seen with TV.

A few prior studies found a relationship between TVR and clinical outcomes for locally advanced NSCLC treated with chemoradiation therapy (8-10,12). A systematic review found that the median TV change during radiation therapy ranged from 18% to 70.9%, though measurement method, time of re-evaluation, and initial stage varied greatly between individual studies (10). Among 38 patients, Jabbour et al. observed a median TVR of 39.3% from the first to last date of treatment, and found a significant benefit in survival for those with TVR ≥39.3% vs. TVR <39.3% (median OS 31 vs. 10 months, P=0.02) (8). Among 52 patients, Wald et al. calculated a median TVR of 62% (absolute reduction of 39.9 cm3) from the first to last date of treatment, and found that greater relative TV changes during the first 4 weeks of treatment associated with better OS, PFS, and distant control (9). Among 111 patients, Kanzaki et al. found a median tumor reduction rate (TRR) of 45.9%, and a significant association between TRR and PFS but not OS. Interestingly, they found that a higher TRR correlated with better OS and PFS in the squamous cell carcinoma group but with worse OS in the adenocarcinoma group, suggesting the importance of histology (12).

It is possible we did not observe a significant benefit with larger TVRs because of the relatively lower median TVR (10.1%) and median absolute reduction (0.84 cm3) seen in our cohort. Three to five fractions, the typical length of SBRT, may not be enough time to observe clinically significant decreases in TV. Alternatively, TVR may hold greater predictive value in locally advanced vs. early stage NSCLC because of the more aggressive disease course and the higher local failure rates.

There are some noteworthy limitations of our study. First, our inability to find a significant correlation between TVR and clinical outcomes may be because of our small study size (n=73). Nevertheless, our sample size is larger than two of the aforementioned studies that assessed TVR for NSCLC (8,9). A relative strength of our study is that we included patients treated at two academic institutions, all of whom were treated with a uniform approach and biologically effective dose >100 Gy. Second, the Kaplan-Meier curves comparing OS and PFS between the high and low TVR groups appear to converge over time (Figure 1C,D), which decreases the power of the log-rank test and ability to detect a significant difference. This is why we analyzed OS and PFS at 2- and 4-year intervals, as perhaps the relative importance of TVR changes with time. Third, our study was retrospective, introducing the possibility for confounders or uncontrolled biases. We could not control for pre-treatment tumor growth rate, and did not have a conclusive histology for all tumors. Tumors that grew slowly prior to treatment and/or those with adenocarcinoma histology typically regress slowly even after a few months following SBRT, possibly irrespective of clinical outcomes. Additionally, though we reported ECOG performance status, we could not adequately control for baseline patient comorbidities which may significantly affect OS and PFS. We did analyze recurrences which should be less affected by comorbidities; however, the limited number of recurrences (21 locoregional, 13 distant) precluded a more detailed analysis.

In conclusion, TVR did not appear to be a reliable predictive imaging marker for early stage NSCLC treated with SBRT. Additional multi-institutional studies with larger sample sizes are needed to clarify a potential relationship between TVR and early outcomes after SBRT.

Conflicts of Interest: All authors have completed the ICMJE uniform disclosure form (available at http://dx.doi.org/10.21037/jtd.2020.03.46). SKJ has research funding and consulting fees from Merck and Nestle. JM has served on the advisory board for Pfizer and Astra-Zeneca and received research funding from Beyond Spring Pharmaceuticals. The other authors have no conflicts of interest to declare.