We set out to classify the pattern of bullae formation for 458 PSP patients under 30 years of age who underwent thoracoscopic bullectomy from March 2004 to February 2012 at a single institution. Through preoperative chest computed tomography (CT; especially, coronal section) and intraoperative findings of PSP patients, we discovered three new findings that have been commonly seen but have not been given any meaning to them in the past. Furthermore, utilizing these findings, we hypothesized that the mechanism of bleb/bullae formation might be very closely related to the physical compression and friction effects of the surrounding chest wall structures on the lung parenchyma.

First, note a “rib-line” that occurs in the shape of a band where the upper lobe of the lung is in contact with the ribs, mostly from the first to the fifth ribs (Figures 1,2). This rib-line is a mark on the lung surface resulting from mechanical compression and repeated friction by the ribs. As a result, the lung parenchyma may result in fibrosis through a chronic inflammatory reaction, or in bleb/bullae formation through emphysematous like changes. Previous studies for PSP etiology demonstrated the diffuse pleural porosity, inflammatory cell infiltration, fibrotic scar, and compensatory emphysema in the pathologic examination of the lung specimen (6). We found that the rib-line could explain all these changes. Pathologic results also add credibility to our hypothesis. Of course, the rib-line can be seen even in a healthy population, however, in a tall and thin person, the bony prominence of the ribs is more pronounced, and the narrow thoracic cavity makes the friction more pronounced between the lung and the ribs, resulting in more prominent rib-lines.

Figure 1 Various phenotypes according to the severity of the rib-line which is indicated with an arrow: (A) mild type; (B) emphysematous like changes; (C) multiple blebs on the rib-line. (Intraoperative images obtained from video-assisted thoracic surgery for primary spontaneous pneumothorax). 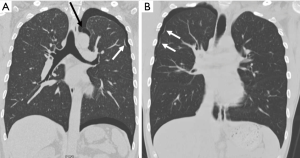 Figure 2 Evidence of rib-line shown on preoperative CT images (white arrows). In (A) a bulla just above the aortic arch is seen (black arrow). If there is a rigid structure around the lung and there is a balloon effect with mechanical friction, bullae can be formed like in the vicinity of the aortic sulcus.

Secondly, we can see a small hole that penetrates the parietal pleura, which we have named “p-spot (pneumothorax-spot)”, which is more visible when the lung collapse occurs in PSP. It is an evidence that the small bleb from the lung apex has been located in the mediastinal soft tissue layer, digging into the chest wall that has been in contact for a long time (Figure 3). Preoperative CT findings of 458 PSP patients revealed that 98.9% (453/458) had bleb/bullae in the posterior part of lung apex, and 29.7% (136/458) had p-spots.

Figure 3 Evidence of p-spot. The black arrows indicate the p-spot and its corresponding bulla site. The white arrow demonstrates where the large bulla was located, which is surrounded by the 1st and the subclavian vessels.

In 2014, Lin et al. first reported the presence of vascular-penetration defect (VPD) in 40.9% of PSP patients (7). The VPD they indicated is the same phenomenon as the p-spot we named. However, they explained with a different concept that the pulling of the visceral pleura by the negative pressure gradient in the lung apex produced VPD. As is well known, the chest cavity is a vacuum structure with negative pressure under normal breathing. We guess that initial bleb formation will be difficult in this normal and calm state of breathing. For bleb to be initially created, a strong pressure will be required to overcome the resistance of the visceral pleura to remain unchanged. We should pay attention to situations like Valsalva maneuver, including heavy lifting, forceful coughing, straining on the toilet, blowing a balloon, holding breath, or vomiting. It means a strong transient increase in intrathoracic pressure. Such situations are closer than we realize. This results in strong intrapulmonary positive pressure, inward movement of the chest wall, and diaphragm elevation. Lung and ribs are hit directly by positive pressure at this moment. This repetitive friction itself creates emphysematous like changes or bleb/bullae, while at the same time making the balloon effect in the apex of the upper lobe or superior segment of the lower lobe. Once the bleb is formed, intrathoracic negative pressure will be the basis for maintaining and developing its morphology. As the positive intrapulmonary pressure makes a bleb, it is assumed that the VPD can be made by the mechanical compression of the bleb. The stimulus during this process is thought to evoke angiogenesis. We still think that the term “p-spot” works better because this is very directly related to pneumothorax or hemopneumothorax.

If a bleb whose perimeter is all adhered to surrounding parietal pleura bursts into the mediastinal soft tissue, only primary spontaneous pneumomediastinum can occur without PSP. When the most vulnerable bulla ruptures and the lung collapse happens in succession, the detachment force from the parietal pleura rises to the bleb placed on the p-spot. If the force of this detachment damages the blood vessel in the area, bleeding may occur and become primary spontaneous hemopneumothorax.

Thirdly, note a “strangle sign” shows a bulla captured and surrounded by adjacent thoracic structures in the apex of the thoracic cavity. We have observed that in many patients with PSP, the bullae were formed in the posterior portion of the lung apex (Figure 4). That region shows the balloon effect resulting from the influence of the compressed upper lobe by ribs, thus forming bullae (Figure 5). If the p-spot is a sign of a digging trace of a small bleb, the strangle sign is a squeezed bulla into the apico-posterior space surrounded by the 1st rib and subclavian vessels. Once a small bleb has settled in this apical space, it tends to take up more and more space. The surrounding structures intensify the choking of the bullae. Naturally, the rupture of the bullae also occurs most commonly at this site. 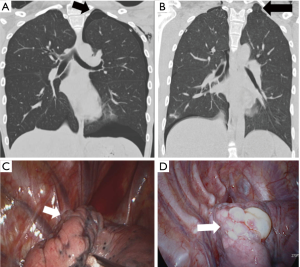 Figure 4 Panel A and B show “strangle sign”. Initially, it begins with a small bulla, but it takes up more and more space in the lung apex, which leads to bulla itself to be captured (black arrow). Panel C and D: the place where the balloon effect is most likely to occur is the posterior portion of the lung apex (white arrow).

Figure 5 Balloon effect to explain the mechanism of bulla formation: (A) normal chest; (B) thin and tall thorax. The combination of mechanical friction and balloon effect will make a good condition for the bullae formation. It is the posterior part of the lung apex rather than the lower lobe.

The implication of the hypothesis

There have been several bullae formation hypotheses and risk factor analyses for PSP occurrence including discrepancy between the static lung growth and the rapid increase in chest height (8), pleural porosity (9), FLCN (folliculin) gene mutation (10), distal airway inflammation (11), hereditary predisposition (12), abnormalities of the bronchial anatomy (13), ectomorphic physiognomy with more negative intrapleural pressures (14), and apical ischemia at the lung apex (15), low body mass index and caloric restriction (16). However, they were not enough to cover the overall pathogenesis of PSP patients. For example, the theory of apical lung ischemia is difficult to explain the bullae pattern on the lateral surface of the upper lobe. It accounts for 27.9% (128/458) in our PSP patients. Our hypothesis can help predict the location of the ruptured bullae and give a rationale that covering the lung apex with a bioabsorbable reinforcement sheet rather than mechanical pleurodesis may be more effective in preventing recurrence during PSP surgery (17). Also, it may be a good starting point to combine thoracic deformity correction with bullectomy operation in the case of PSP patients with a definite funnel chest.

In our ex-vivo porcine lung experiment (18), we incidentally found that a bleb was able to be made by the friction of the lung with two fingers. However, an objective and quantified animal experiment model would be needed.

Under the assumption that bullae formation is related to the shape of the chest, we can infer the link with bullae formation by analyzing the patients with pectus excavatum, which is a typical thoracic deformity disease. Recent studies have shown that PSP patients have higher Haller index, anteroposteriorly flatter, laterally narrower, and craniocaudally taller thorax compared with age and sex-matched control population (19,20). Interestingly, pectus excavatum has male predominance with a similar pattern to the incidence of PSP (21).

We propose an association between narrow chest, mechanical compression/friction, rib-line, balloon effect, bullae formation, and PSP. Our model enables intuitive understanding through figures and helps us realize another dimension of PSP pathogenesis through new terminology. However, we still need more tests for the widely accepted theory.

Conflicts of Interest: Both authors have completed the ICMJE uniform disclosure form (available at http://dx.doi.org/10.21037/jtd.2020.03.39). HCY serves as the unpaid editorial board member of Journal of Thoracic Disease from Feb 2019 to Jan 2021. SJ has no conflicts of interest to declare.