In vitro comparison of everting vs. non-everting suture techniques for the implantation of a supra-annular biological heart valve

Aortic valve stenosis is the most frequent valvular disease in western countries mainly caused by degenerative calcification (1). The gold standard for the treatment of such degenerated valves is aortic valve replacement (AVR) (2). In 2017, 9,484 surgical aortic valve replacements with biological valves were performed in Germany at which the hemodynamic outcome of the procedure is determined by different factors (3). In this respect, biological valves with a rigid (stented) sewing rings are known to offer comfortable implantation but a smaller orifice areas than native valves and potentially create turbulent flow patterns (4). Whereas stentless prostheses provide optimal orifice areas due to the lack of surrounding material and are supposed to maintain physiologic aortic root dynamics (5). However, the implantation of this valve type requires an experienced surgeon. New generation stented valves are designed for supra-annular implantation, offering the maximum achievable orifice area by utilizing free space within the aortic root, thus an actual greater valve diameter could be applied to reduce the risk of patient-prosthesis-mismatch.

However, not only the geometry and characteristics of the prosthesis are important but also the implantation technique. In this regard, Sievers et al. and Tasca et al. have shown that the suturing technique for AVR impacts the annulus diameter (6,7). The conventional suturing technique includes the non-everting pledget forced suture which adds extra material to the outflow tract and thus tends to reduce the effective outflow diameter, consecutively resulting in higher transvalvular gradients. These observations raise the question, can a technique which avoids or relocates suture supporting material improve the hemodynamic performance of such supra-annular valves.

A St. Jude Trifecta aortic valve (St. Jude Medical Inc./Abbott, St. Paul, MN) with a size of 25 mm was used for hemodynamic measurements. The Trifecta valve is a biological, stented valve made for supra-annular implantation. The valves were implanted into a Dacron prosthesis (26 mm) incorporating bulbed sinuses (Unigraft W sinus, Aesculap AG, Tuttlingen, Germany). To mimic the aortic annulus, an additional crown-shaped Dacron patch was sutured within the prosthesis. Afterwards, the whole conduit was coated with low viscosity silicon to prevent leakage.

For each trial the valve was implanted using both the everting (n=13) and non-everting pledget forced (n=13) suturing technique. For the non-everting pledget forced suture, the suture direction was started from the ventricular side of the annulus and was finalized on the aortic side. After a first run of measurements the valve was carefully removed from the prosthesis and subsequently reimplanted using the everting technique. For this technique, the direction was switched starting the approach on the aortic side finishing on the ventricular, positioning the felts above the sewing ring (Figure 1). To prevent a systematic error, the sequence of implantation was randomly alternated. 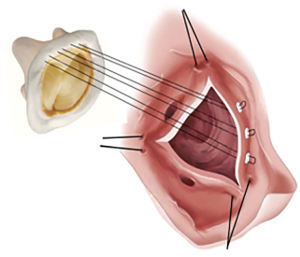 Figure 1 Schematic of the implantation using the everting suture technique.

The valves were mounted in a pulse duplicator simulating the left heart function as previously described (8). Pressure measurement was obtained via capacitive pressure sensors (Endress + Hauser, Maulburg, Germany). An ultrasonic flowmeter (Transonic Inc., Ithaca/NY) provided measurements of the volume flow through the valve. A high-speed camera (Motionscope HR-1000; Redlake Imaging Corp., Morgan Hill, CA, USA) was mounted above, taking 500 images per second to record the valve’s movements and orifice area. Hemodynamic testings were performed with 125 mmHg systolic and 80 mmHg diastolic pressure at a heart rate of 64 beats per minute. Saline solution (0.9%) was used as test fluid at room temperature for trials.

Values are given as mean and standard deviation.

Obtained values were tested for normal distribution using the Kolmogorov-Smirnov-Test. Unpaired t-tests were performed to detect differences between both suturing techniques at which P values ≤0.05 were considered significant.

The results of the hemodynamic measurements are shown in Figure 2. 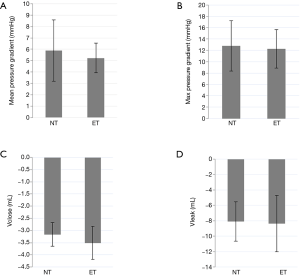 Figure 2 Hemodynamic results of the St. Jude Trifecta aortic valve using the non-everting (NT) vs. the everting suturing technique (ET). Negative values for the closing and leakage volume indicates backflow to the ventricle.

The video recordings after the implantation of the valve using the non-everting suturing technique show suturing material extending into the outflow tract during systole (Figure 3). 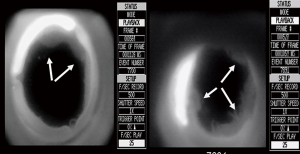 Using the everting suturing technique, the outflow tract appears free in both directions according to the records (Figure 4).

Figure 4 The outflow tract using the everting suturing technique does not show any material.

This study aimed to compare the effect of different suturing techniques on the hemodynamic performance of the supra-annular St. Jude Trifecta aortic valve in vitro.

Third generation stented aortic valve prostheses such as the St. Jude Trifecta valve provide excellent hemodynamic results (9,10). It has also been shown that the supra-annular position yields a larger diameter compared to the intra-annular position resulting in decreased flow obstruction (11). However, hemodynamics may be additionally influenced by the suturing technique. Using the “conventional” suturing technique with non-everting pledget forced sutures, extra material is added to the annulus area. Material, such as felt pledgets, rising into the left outflow tract may influence hemodynamic performance. Even a one millimeter reduction of the achieved geometric orifice area on each side leads to a 30% decrease in annular size (12). Petracek et al. and Tabata et al. suspected this material to be liable for pannus creation and subsequent increases transvalvular gradients over time (13,14).

The impact of increased transvalvular gradients is of particular importance for patients with small annuli, since these patients face higher risk of patient prosthesis mismatch (PPM) (13). This mismatch is observed when a valve orifice area is too small relative to a patient’s body size, and it is associated with poor outcomes after AVR. Specifically, PPM can result in poor symptom reduction, stagnant coronary flow reserve, and enduring left ventricular hypertrophy.

Studies have further shown that PPM can be an independent predictor for long term mortality in patients less than 60 years of age (15-17).

In order to reduce PPM in patients at high risk, it is possible to conduct aortic root enlargements; however, these are high risk procedures which require an experienced surgeon due to increases in bypass time and mortality rate (18).

The hemodynamic behavior of the St. Jude Trifecta aortic valve has been studied before in comparison to the Perimount Magna and Magna-Ease valve prostheses (Edwards Lifesciences Corp., Irvine, CA, USA) supra-annular implanted valves (19). Hemodynamic analysis showed advantageous mean pressure gradients and orifice areas for the St. Jude Trifecta aortic valve. Bavaria et al. and Deutsch et al. have shown similar results regarding transvalvular gradients to the presented data (9,10). Leakage and closing volumes could not be compared because no study has provided this data, to the best of our knowledge.

In this study noticeable visual narrowing of the left ventricular outflow tract was observed which could suggest increased hemodynamic gradients in the non-everting suturing technique compared to the everting suturing technique. However, no statistically significant differences in transvalvular gradients were detected between the two techniques. Because 25 mm valves provide large, hemodynamically efficient orifice areas, it is expected that only marginal differences in pressure gradients would be observed. More commonly the St. Jude Trifecta is used in the 21 and 23 mm sizes, which create higher transvalvular gradients than 25 mm valves (20). Thus, it would be interesting to compare both techniques using valves even of a size of 19 mm to evaluate the impact of these two suturing techniques in smaller annuli.

Ugur et al. analyzed the effect of different suturing techniques in patients with small valves including the St. Jude Trifecta valve sizes 19 and 21 mm retrospectively (21). Both valve sizes were implanted into 346 patients which were split into two groups: 269 patients received the valve using a non-everting suturing technique and 77 received the valve using a single suture or everting mattress suture technique. Statistically significant difference regarding the hemodynamic performance could not be shown. However, both groups differed remarkably in the number of acquired patients and the data was collected retrospectively. Echocardiographic follow up was limited to one year.

Tabata et al. used 19 and 21 mm Carpentier-Edwards Perimount Magna aortic valves and compared single sutures with non-everting mattress sutures in 152 patients (13). Postoperatively valve orifice area was measured to detect potential patient prosthesis mismatch in this cohort of patient with a small aortic annulus. This investigation showed that single armed sutures provided a bigger aortic valve orifice area compared to non-everting mattress sutures and reduces the incidence of PPM. Video analysis in the present study showed a distinct amount of the suturing material (namely, the applied felts) extending into the outflow tract. Although statistically not significant within our study, the felts which were visible in each record may have a long-term effect e.g., on the hemodynamic performance of the valve and durability since this is just a snapshot of the immediate situation. Increased blood flow in vivo may add stress and turbulent flow to the area around the valve and have a more severe effect on the dynamic aortic root. Also, over time, this material may be endothelialized in vivo and could contribute to an even smaller aortic valve orifice area, increasing the risk of early valve deterioration by calcification since the area around the sewing ring is crucial for pannus formation (13).

Results were obtained using an in vitro model which may not completely reflect the in vivo environment. The valve was implanted into a Dacron prosthesis which is stiffer than the native aorta. Aortic graft material comes with a reduced compliance and increased velocity compared to native aortic tissue which provides the unique Windkessel effect (22). Saline water was used as test fluid which has a lower, Newtonian viscosity compared to blood and may result in differences from in vivo hemodynamic parameters.

Our study has shown that an aortic valve replacement with a biological prosthesis can be performed with either suturing techniques achieving similar hemodynamic results. Regarding the practicality of the everting suturing technique, implantation is equally feasible to the non-everting technique. However, results were obtained implanting a valve with a large diameter; thus, only small effects of the suturing technique were detected. Subsequent in vitro studies comparing both techniques using smaller valves may reveal higher impact on the hemodynamic performance. In addition, clinical studies with long term follow up may show impacts in patients with small annuli and different implantation techniques.

Conflicts of Interest: All authors have completed the ICMJE uniform disclosure form (available at http://dx.doi.org/10.21037/jtd.2020.03.55). The authors have no conflicts of interest to declare.