Lung cancer is the leading cause of cancer deaths in Europe, accounting for an estimated 388,000 deaths in 2018 (1). Radical surgical resection still is the main curative treatment modality for patients with early stage lung cancer, even for high-risk patients, including high age (2,3).

Due to ageing population a worldwide increase of surgery for lung cancer in elderly patients is being observed (4). The definition of elderly varies in different publications. While the World Health Organization defines elderly as persons over the age of 65 there is a clear trend to an upward shift over the last years, reaching up to octogenarians.

Surgery in elderly can be associated with a relatively high perioperative morbidity of up to 55.8% (5-7). However, chronological age alone is not anymore a contraindication for lung cancer surgery (8-10). Recent publications have shown an acceptable postoperative morbidity and mortality in elderly patients (11,12). Even in octogenarians, the morbidity and the mortality rates were 8.4–48.0% and 1.1–8.8%, respectively; the 5-year overall survival rate was 27.0–57.5% (12). A thorough preoperative functional evaluation can guide the clinically challenging decision, taking the variety of comorbidities as well as the functional, nutritional and social status into consideration.

A number of papers tried to answer the question whether lung cancer surgery is justified in elderly patients or not (13-15). Risk factors included male gender and operation time (12). However, there is only limited evidence regarding the role of surgical approach in the early postoperative outcome in these patients (11). Minimal-invasive techniques including video-assisted thoracoscopic surgery (VATS) represent a safe and efficient surgical approach for early-stage lung cancer in elderly patients (16). VATS is recommended as an acceptable approach for early stage lung cancer (17) (NCCN 2019).

The aim of the study is to investigate the risk factors of postoperative complications in elderly (>70 years of age) early-stage lung cancer patients at our institution and to answer the question which surgical approach leads to a better early postoperative outcome.

A retrospective analysis was performed in patients who underwent curative intent anatomical resection for histologically confirmed, clinical stage T1/2 lung cancer (UICC 7th edition of TNM classification and staging system) at our institution. Our prospectively maintained ESTS database of all patients undergoing thoracic surgery for lung cancer was used to identify those patients. Written informed consent was given by all patients and the study was conducted following the approval of the local Ethics Committee (18-8030-BO). Patients with small cell lung cancer, preoperative chemo- or radiotherapy were excluded. Clinical characteristics included age, gender, BMI, functional status, preoperative comorbidity, lung function, tumor histology, clinical and pathological stage (C-stage and P-stage), operative procedure and approach, postoperative cardiopulmonary complications, 30- and 90-day mortality and length of hospital stay. All patients were staged according to the UICC 7th edition of TNM classification and staging system. The extent of lung resection was determined based on the preoperative evaluation criteria proposed by the ESTS-guidelines (8).

All procedures were performed under general anesthesia with single lung ventilation. Postoperative pain management was provided either by continuous administration of epidural (usually fentanyl with bupivacaine 0.05%) until chest drain removal or a combination of an opioid (oxycodone) with a nonsteroidal anti-inflammatory medication (metamizole) at the maximum dose. In all minimal-invasive procedures and in cases where an epidural anesthesia was contraindicated an intercostal block (20 mL Ropivacaine 1%) was utilized. After surgery, all the patients participated in active physiotherapy provided by the physiotherapy department of the certified lung cancer center.

The minimal-invasive approach was the preferred approach. It was the surgeon’s decision to do a uni-, bi- or triportal VATS. Robotic-assisted thoracoscopic surgery (RATS) was done using the Da Vinci robotic system with the 3- or 4-arm robotic approach in selected patients. Conversion from VATS or RATS to a thoracotomy was performed in case of an uncontrollable bleeding or extended adhesions. An open approach (anterolateral, muscle-sparing thoracotomy) was chosen in case of central tumors, bronchial or vascular sleeve resections or extended adhesions. A complete systematic mediastinal and hilar lymph node dissection was performed in all operations (18).

The data are presented as frequency and percentage for categorical variables and as median and range for continuous variables. The Wilcoxon rank test were used to compare continuous variables and the chi-square or Fisher’s exact tests were used for categorical variables. P value less than 0.05 was considered significant. The statistical software GraphPad Prism 5.0 (GraphPad Software, La Jolla, CA, USA) was used for all analyses.

The review of the prospective thoracic surgical cases performed from January 2016 to November 2018 identified 505 patients who fulfilled the inclusion criteria. There were 278 males and 227 females, ranging in age from 39 to 88 years (median age of 66). Two groups were studied according to age (<70 years old, 315, 62% and ≥70 years old, 190, 38%) (Table 1). A significantly higher proportion of the elderly patients were male (65%, P=0.009). There was no difference in the preoperative lung function parameters FEV1% and DLCO% (Table 1). Of note, we found a small but significant increase in the proportion of patients with higher BMI (>30) in the below 70 years old subcohort. The main histology was adenocarcinoma (56%) followed by squamous cell carcinoma (32%) and others (12%). Of note, squamous cell carcinoma was significantly more frequent in elderly patients when compared to younger ones (39% vs. 29%). Pathological T2 tumors were significantly more frequent in elderly individuals in comparison to younger patients (49% vs. 40%, P=0.033). The predominant resection type was lobectomy and bilobectomy, whereas pneumonectomy was only performed in 4 patients of each group. Sublobar resection was performed in 7% of all cases. Regarding surgical approach there was no significant difference between elderly or younger patients. In each age group an analysis regarding the surgical approach (minimal-invasive vs. open) was performed. There was a balance between open and minimal-invasive approach (52% vs. 48%). Of all patients, 241, 218 and 46 underwent thoracotomy, VATS and RATS, respectively (Table 1). 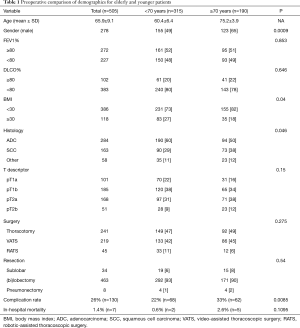 The overall complication rate was 26% in the whole cohort. Table 3 lists all the postoperative complications in detail. The only significant difference was found in atrial fibrillation (P=0.028). The overall complication rate was significantly higher in the elderly group (33% vs. 22%, P=0.0085) (Figure 1). Major cardiopulmonary complications were observed in 4.2% (n=21) patients. One out of 8 pneumonectomy patients had MCP (12.5%), while MCP rates in sublobar resection (2.9%) and (bi)lobectomy (4.1%, P=1.0) were similar. There was no significant difference in major cardiopulmonary complication rate following minimally invasive surgery between patients above or below 70 years of age (4.3% vs. 2.5%, P=0.47). In contrast, major cardiopulmonary complication rate was significantly higher in elderly thoracotomy patients than in patients below 70 years of age (9.9% vs. 2.6%, P=0.035) (Table 4, Figure 2). There was a significant difference in MCP when comparing open and minimal-invasive technique taking age into account (P=0.025). The hospital stay was significantly shorter in elderly patients operated by minimal-invasive compared to open approach (8.1 vs. 11.9 days, P<0.0001). Thirty- and 90-day mortality was comparable with 1.4% and 1.5%, respectively. 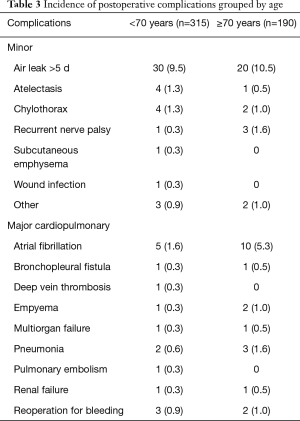 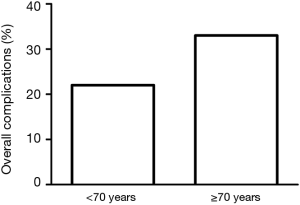 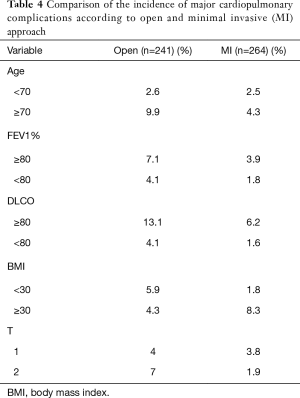 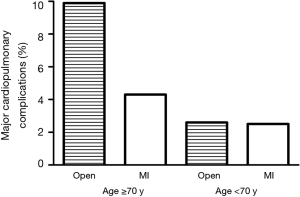 Finally, we further analysed the elderly patient cohort in terms of gender, preoperative lung function and BMI focusing on the open and minimally invasive techniques. Table 5 shows that elderly thoracotomy patients had worse lung function and were more frequently male or obese. Important to note that despite these findings two thirds of the patients with MCP had above 80 FEV1% and more than half of them above 80 DLCO% which is a higher proportion than in the overall patient cohort. 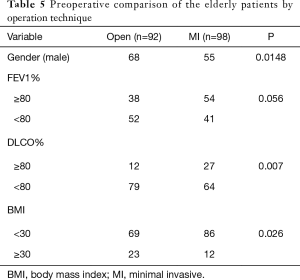 In our series, the operative mortality was lower than that in other series (23), probably because of the higher number of octogenarians and the relatively large number of patients with pneumonectomy in their cohorts.

Shorter length of hospital stay in elderly patients operated by minimal-invasive approach compared to open approach is consistent with many authors (23). In our study, we observed that the minimal-invasive group had a shorter median length of stay compared with the thoracotomy group by 3.8 days. The difference is even more obvious than in the group Cattaneo investigated (21). In the era of enhanced recovery after surgery (ERAS) (24) the utilization of minimal-invasive techniques, especially in high-risk patients will increasingly play a pivotal role.

Our study tried to answer a relevant and timely issue in an era of increasingly ageing lung cancer patients presented for surgery. The patient data collection including the complications using the ESTS database guaranteed a uniform and consistent recording. However, this study has some limitations. Due to its retrospective design there is a selection bias. In our study elderly was defined as age ≥70 years, and this varies in literature. Furthermore, we did not match patients in the groups. Nevertheless, both age groups were balanced with no major differences in the pattern of the different clinicopathological variables. Moreover, it was the surgeon’s decision what kind of minimal-invasive approach to be used. In our study, we focused on clinical T1/2 lung cancer patients.

Our study emphasizes that pulmonary resection for lung cancer in elderly patients is safe and can be performed with a low morbidity and mortality. In this high-risk population, the utilization of minimal-invasive surgery is associated with a reduced rate of major cardiopulmonary complications and may therefore be the preferred approach. Additional prospective studies are needed to confirm these findings.

We thank Ms Baerbel Eigendorf for her continuous support in data maintenance and data extraction.

Funding: This study was supported by the open access fund of the University Duisburg-Essen.

Conflicts of Interest: All authors have completed the ICMJE uniform disclosure form (available at http://dx.doi.org/10.21037/jtd.2020.03.73). The authors have no conflicts of interest to declare.

Ethical Statement: The authors are accountable for all aspects of the work in ensuring that questions related to the accuracy or integrity of any part of the work are appropriately investigated and resolved. Written informed consent was given by all patients and the study was conducted following the approval of the local Ethics Committee (18-8030-BO).