As the most common malignancy in the world, lung cancer is one of the leading causes of tumor-related deaths (1). Lung cancer is divided into two subtypes: small cell lung cancer (SCLC), which accounts for approximately 15% of all lung cancers, and non-small cell lung cancer (NSCLC), which comprises the vast majority (approximately 85%) of cases (2). Despite the significant advances in the diagnosis and treatment of lung cancer, including traditional surgery, chemotherapy, radiation therapy, and emerging target therapies and immunotherapy, these treatments fail to achieve a response in many patients. Tumor metastasis is also experienced by many lung cancer patients; and, together, these factors contribute to a poor prognosis. Therefore, there is still a vital need to find new therapeutic drugs for patients with lung cancer (3).

Natural products, especially plant-derived active agents, have assumed a core role in the development of new drugs. Wogonoside or baicalin, a biologically active flavonoid compound (4), is extracted from baicalensis root and possesses anti-cancer, anti-inflammatory, anti-inflammatory, and angiogenic properties (5-7). Recent studies have reported wogonoside exhibits anticancer activity in a variety of cancer models, including breast cancer (8), leukemia (9), osteosarcoma (10), and colon cancer (11). However, to date, no research has been carried out to explore the effect of wogonoside on the occurrence and development of lung cancer. Therefore, this study investigated the effects of wogonoside on the invasion and migration of lung cancer A549 cells and angiogenesis in xenograft tumors in nude mice, to provide a theoretical basis for the usage of wogonoside in the clinical treatment of lung cancer.

We present the following article in accordance with the ARRIVE reporting checklist (available at http://dx.doi.org/10.21037/jtd-20-1555).

A549 and HUVEC cells were cultured in DMEM medium supplemented with 10% FBS, at 37 °C in an incubator containing 5% CO2. When the cells reached a confluence rate of above 85%, they were digested by 0.25% for passage.

Lung cancer A549 cells were treated with various doses (1, 2.5, 5, 10, 25, 50, 100, 200, 300 and 400 µM) of wogonoside, after being seeded in 96-well plates for 24 h. After another 22 hours of culture, the cells were added with 10 µL of CCK8 to each well in line with the manufacturer’s instructions. After incubation for more 2 h, a microplate reader was used to calculate absorbance in each group. A line chart was drawn, and the cell growth rate was calculated (multiplication factor = cell absorbance/0 h cell absorbance).

Lung cancer A549 cells were randomly divided into 4 groups, which were treated with the doses of 0, 10, 25, and 50 µM (the wogonoside 0 µM, wogonoside 10 µM, wogonoside 20 µM, and wogonoside 50 µM groups, respectively). Each group of cells was digested, centrifuged, and resuspended in serum-free DMEM medium at a density of 5 × 105 cells/mL, before 500 µL of DMEM with 10% FBS was added to the upper chamber. After incubation at 37 °C and 5% CO2 for 24 h, the non-invasive cells and extracellular matrix gel were gently removed. The invading cells in the membrane were stained for 20 min, washed with PBS, and then air dried. Five fields were randomly selected, and a microscope was used to count the number of invading cells on the membrane.

Before the experiment, five parallel straight lines were drawn on the back of a culture plate with a marker pen. Cells from each group were seeded in 12-well plates, and a 10 µL pipette was used to scratch straight lines perpendicular to the culture plate. The cells were then washed 3 times with warm PBS, and serum-free culture medium was added for culture. Photos were taken at 0 h and after 48 h, and the width of the scratches was recorded. The rate of cell migration was calculated based on the changes in the width before and after the culture.

To determine the angiogenic capacity of endothelial cells, a tubule-formation assay was performed in vitro. Pre-coated Matrigel (5 mg/mL, BD, USA) was solidified via incubation on a 48-well plate at 37 °C for 30 min. The fused HUVEC cells were suspended in the culture medium at a density of 1.5×105 cells/mL and incubated at 37 °C for 24 h. Photographs were then taken with an Olympus DP71 immunofluorescence microscope and the number of microtubules was determined.

The extraction of total protein from the treated A549 cells was carried out using lysis buffer. The protein concentration was then quantified with a BCA protein measurement kit. The sample containing 20 mg of protein was separated by running 10% SDS-PAGE gel, before being transferred to a polyvinylidene fluoride (PVDF) membrane. The membrane was blocked with 5% skim milk at room temperature for 2 h, and then incubated with primary antibodies against VEGF (1:1,000), E-cadherin (1:1,000), N-cadherin (1:1,000), and vimentin (1:1,000) at 4 °C overnight. The next day, the relative secondary antibody was added, and the membrane was incubated at room temperature for 1 h. Finally, ECL reagent was added to detect the intensity of chemiluminescence corresponding to the target band with set exposure parameters.

The animal experiments were approved by the Ethics Committee of Affiliated Cancer Hospital of Harbin Medical University and were carried out in strict accordance with the Guidelines for Animal Use in the National Institutes of Health. Six-week-old male BALB/c null nude mice (purchased from Liaoning Changsheng Biotechnology, Liaoning, China) were used. Animals were housed in climate-controlled quarters with a 12 h light/12 h dark cycle and had free access to food and water. After acclimated for 2 weeks, 1×106 A549 cells with matrigel (BD Biosciences, San Jose, CA, USA) at 1:1 dilution were subcutaneously injected into the right flank region of all mice. After 5 days, 10 mice with xenografts were randomly divided into two groups and intraperitoneally injected with 80 mg/kg/d of wogonoside or saline for 30 days as reported in previous research (12). Then the mice were anesthetized and sacrificed, and the samples were harvested for further experiments.

Immunohistochemical detection of VEGF and vimentin

Immunohistochemical staining of VEGF and vimentin in the tumor tissues was performed using a streptavidin-biotin-complex peroxidase kit. The slides were rinsed, dehydrated and mounted under a microscope to check and count immune response cells with the color as yellow to brown. The immunostaining was analyzed with an Image-Pro Plus image analysis system connected to the Olympus microscope. At 400× magnification, cells with VEGE and vimetin-positive staining were quantified by counting the total number of yellow to brown cells in five randomly selected fields of view.

Blood was collected under sterile conditions and single cells were then isolated from peripheral blood. The samples from each group were diluted, centrifuged, and then cultured for 6 h so that unattached cells were discarded. The attached cells were considered peripheral blood mononuclear cells (PBMCs). PBMCs were collected, and then fixed and permeated. Anti-mouse CD34 FITC fluorescent monoclonal antibody was added to achieve full contact between the pellet and the antibody. The mixture was incubated for 30 min in the dark, and then centrifuged to retain the pellet. CD34 content was then immediately detected by flow cytometry.

Statistical analysis was carried out with SPSS 21.0 (Chicago, IL, USA). Differences between groups were tested by t-test or one-way analysis of variance. Results were expressed as mean ± standard deviation (x±S), and the difference was considered statistically significant with P<0.05. 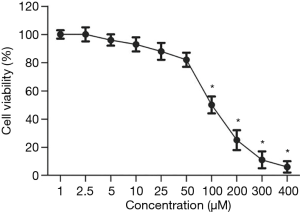 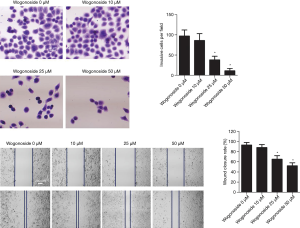 Figure 2 Changes in A549 cell invasion and migration after treatment with wogonoside at different concentrations. *, P<0.05 compared with the Wogonoside 0 μM group. 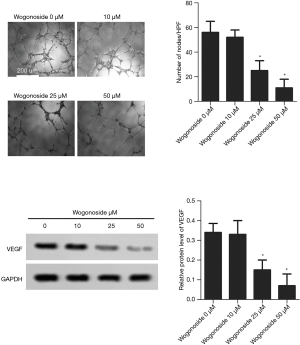 Figure 3 Changes in microtubules and VEGF expression after treatment with wogonoside at different concentrations. *, P<0.05 compared with the Wogonoside 0 μM group.

Figure 4 Changes in the expression levels of E-cadherin, N-cadherin, and vimentin after treatment with wogonoside at different concentrations. *, P<0.05 compared with the Wogonoside 0 μM group.

The effects of wogonoside on angiogenesis in xenografts of nude mice 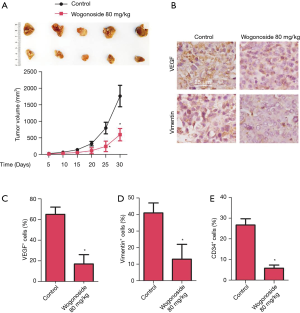 Figure 5 Effects of 80 mg/kg wogonoside in vivo. (A) Tumors at day 30 in both groups and changes in tumor volume during treatment. (B) Immunohistochemical staining of VEGF and vimentin, and immunohistochemical positive cells were counted for (C) VEGF and (D) vimentin. (E) CD34 content in PBMC tested with FACS after treatment. *, P<0.05 compared with the control group.

In recent years, significant progress has been made in studies on the molecular mechanisms of active ingredients of traditional Chinese medicine in tumor inhibition. The bioactivity of such ingredients includes the inhibition of tumor growth, the induction of apoptosis and cell differentiation, cytotoxicity, the regulation of cell signal transduction, multidrug resistance reversal, and the inhibition of telomerase activity (9,12,13). In this study, lung cancer A549 cells were treated with different doses of wogonoside. After 24 h, the A549 cell survival rate was reduced by bupivacaine in a dose-dependent manner. Therefore, bupivacaine doses without significant toxicity (0, 10, 25, 50 µM) were selected for subsequent experiments, to confirm the potential antitumor effect of wogonoside on lung cancer A549 cells.

Malignant tumor cells have the ability to migrate and invade to affect the surrounding normal tissues. Tumor metastases, in which invasion plays a core role, account for 90% of cancer-related deaths (14). During the invasion process, tumor cells first lose cell-to-cell connectivity, then degrade, restructure, and adhere to the surrounding extracellular matrix, before eventually migrating to distant sites through the extracellular matrix (15). Studies have confirmed that wogonoside can inhibit the invasion and migration of breast cancer cells, both in vitro and in vivo (8). This study showed that after treatment with wogonoside, the rate of A549 cell invasion decreased, as did the rate of scratch closure, which suggests that wogonoside might inhibit the invasion and metastasis of lung cancer A549 cells.

EMT occurs during the progression of epithelial tumors to increase the migration and invasion capacity of cancer cells. The process of EMT results in the downregulation of epithelial markers E-cadherin and upregulation of mesenchymal markers such as vimentin and N-cadherin (16). Malignant cells have the ability to invade and metastasize during the EMT process. Previous studies have shown that the level of EMT is closely related to tumor aggression and recurrence, and a poor prognosis (17). A study by Wei et al. found that wogonoside inhibits the EMT process in prostate cancer PC3 cells via the upregulation of the protein level of E-cadherin, and the downregulation of the protein expression levels of vimentin and N-cadherin (18). The results of this study indicated that in A549 cells, after the treatment of wogonoside, the protein level of E-cadherin increased, while the expression levels of N-cadherin and vimentin decreased, which was consistent with the results of Wei et al. (18). Comprehensive experimental results indicated that wogonoside can inhibit EMT in lung cancer A549 cells.

In summary, wogonoside can inhibit the invasion and migration of lung cancer A549 cells and angiogenesis of xenograft tumors in nude mice, which may provide a theoretical basis for the usage of wogonoside in clinical treatment of lung cancer.

Reporting Checklist: The authors have completed the ARRIVE reporting checklist. Available at http://dx.doi.org/10.21037/jtd-20-1555.

Conflicts of Interest: All authors have completed the ICMJE uniform disclosure form (available at http://dx.doi.org/10.21037/jtd-20-1555). The authors have no conflicts of interest to declare.

Ethical Statement: The authors are accountable for all aspects of the work in ensuring that questions related to the accuracy or integrity of any part of the work are appropriately investigated and resolved. The Ethics Committee approved the study of our center (No. KY2018-20).