Chronic obstructive pulmonary disease (COPD) is a progressive disorder characterized by a persistent airflow limitation and chronic systemic inflammation, due to significant exposure to noxious particles and gases (1). COPD manifests in two clinical phenotypes: chronic bronchitis and emphysema. Chronic bronchitis is clinically defined as a productive cough on most days of the month for at least 3 months during a year or more in 2 consecutive years, and characterized pathologically by hyperplasia of the submucosal glands and thickening of the subepithelial basement membrane (2).

The main characteristic of chronic inflammation in patients with COPD is the accumulation of neutrophils, macrophages, B-cells, lymphoid aggregates, and CD8+ T-cells in the small airways. Cytokines and chemokines are involved in many aspects of COPD, including recruitment of these cells, airway remodeling, induction of emphysema, and systemic inflammation (3). Many reports have described elevated levels of interleukin (IL)-6 and tumor necrosis factor-α (TNF-α) in induced sputum or bronchoalveolar lavage (BAL) fluid. Sputum neutrophils and circulating levels of TNF-α and C-reactive protein (CRP) are the best markers of COPD severity (4). In particular, elevated concentrations of biomarkers of systemic inflammation, such as IL-6, CRP, fibrinogen, and leukocytes, are associated with poor clinical outcomes in patients with COPD, including COPD exacerbations and mortality (5). In recent studies, plasma IL-33 levels in patients with stable COPD were associated with blood eosinophil count, age, smoking status and the presence of chronic bronchitis, and were thought to be related to disease severity (6).

AG NPP709 (Synatura®) was developed by a South Korean pharmaceutical company (Ahn-Gook Pharmaceuticals Co., Ltd.), and formulated with a dried 30% ethanolic extract of Hedera helix L. (ivy; Lamiaceae) leaves and a dried water-saturated butanolic extract of the Coptis chinensis Franch (Ranunculaceae) rhizome (3:1, w/w). AG NPP709 was demonstrated to be efficacious in decreasing cough and sputum in patients with acute upper respiratory infection and chronic inflammatory bronchitis, in a phase III clinical trial conducted in 2010 (NCT01151202). AG NPP709 was approved by the Korean Ministry of Food and Drug Safety in March 2011 for treating cough and sputum due to bronchitis. AG NPP709 is currently on the market; however, no study has investigated the effect of AG NPP709 in patients with COPD. Therefore, the aim of this study was to evaluate the efficacy of AG NPP709 in patients with chronic bronchitis type COPD.

This study was a 12-week, prospective, single-arm, open-label, phase IV clinical trial (NCT03623282). The first patient to participate in the study was enrolled in July 2017 and recruitment was conducted until November 2017. Baseline characteristics of age, gender, chronic bronchitis symptoms, COPD medications, pulmonary function test (PFT) score, smoking history, and COPD assessment test (CAT) score were noted. A blood sample was obtained to measure the degree of systemic inflammation. All eligible patients received AG NPP709 three times daily (15 mL each time) for 12 weeks. After 12 weeks, the PFT and CAT were performed again and a blood sample was taken to measure systemic inflammation. The degree of systemic inflammation was measured by CRP, fibrinogen, IL-6, TNF-α, and IL-33, using enzyme-linked immunosorbent assays.

The primary endpoint of the study was improvement in the CAT score between the baseline visit and week 12. Secondary endpoints were the effect of AG NPP709 on PFT and systemic inflammation, as indexed by CRP, fibrinogen, IL-6, TNF-α, and IL-33 levels. Adverse events, safety, and tolerability were also assessed over the 12-week treatment period.

This study was approved by the Institutional Review Board (IRB) of Seoul St. Mary’s Hospital (IRB approval No. 2017-3400-0006) and written informed consent was obtained from all patients.

The primary outcome of the study was an improvement in the CAT score during the 12 weeks of AG NPP709 treatment. Sample size was calculated based on a two-sided null hypothesis test assessed at the 5% (α=0.05) significance level with 80% (β=0.2) power. Twenty-five patients with a standard deviation of 7.7 were required to test whether AG NPP709 could improve the CAT score (7). Therefore, considering a dropout rate of approximately 15%, 30 patients were enrolled in the study.

Changes from baseline to the endpoints were analyzed by the paired t-test. All statistical analyses were performed using SPSS Statistics for Windows software (ver. 24.0; IBM Corp., Armonk, NY, USA). A P value <0.05 was considered significant.

A total of 30 patients were enrolled. Of these patients, 26 were followed-up after 3 months, 4 were excluded from the analysis; two patients were lost during follow-up. One was excluded due to acute exacerbation of COPD, and one stopped taking the drug due to nausea. Ultimately, 26 patients with COPD were included in the efficacy analysis (Figure 1). 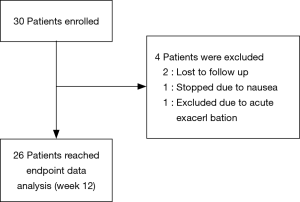 Figure 1 Flow diagram of the study.

Patients were classified using the refined ABCD assessment of the Global Initiative for Chronic Obstructive Lung Disease (GOLD) 2017 criteria (1). Six patients were in group A, seventeen in group B, two in group C, and five in group D.

We compared the CAT scores of the groups with (ICS/LABA and LAMA/LABA/ICS) and without ICS (LAMA or LAMA, LAMA/LABA and without inhaler) to further analyze the baseline characteristics. The total CAT score and the second CAT item, “My chest is full of phlegm”, were not significantly different between the two groups in the Mann-Whitney test (P=0.705, P=0.940, respectively) and the Student t-test (P=0.695, P=0.736, respectively). 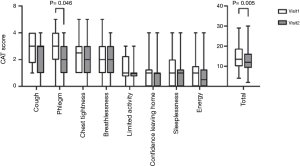 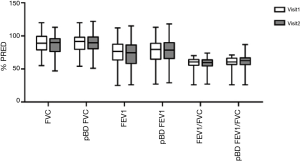 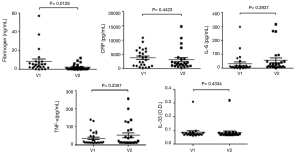 Three patients (10.7%) treated with AG NPP709 experienced at least one adverse event during the treatment period. All three had nausea, and one stopped treatment for that reason. However, no serious adverse events developed.

Ivy leaf extract preparations have long been used to treat cough and mucus hypersecretion. α-Hederin, an ingredient in ivy leaf extracts, inhibits internalization of the β2-adrenergic receptor and enables a high number of receptors to be activated. Elevated cAMP levels and increased cAMP signaling promote the formation and secretion of surfactant from alveolar type II cells, resulting in a secretolytic effect. Bronchial muscle cells also respond to the increased cAMP level, such that muscle relaxation and bronchodilation are achieved (8).

In addition to α-Hederin, several compounds isolated from ivy including hederasaponin-C, hederacolchiside-E, and hederasaponin-F (HSF) have anti-inflammatory properties. HSF exhibits direct anti-influenza effects and is enhanced when used with oseltamivir in vitro and in vivo. PR8-infected mice treated with a combination of oseltamivir and HSF had reduced necrosis, inflammatory cell infiltrates, and pulmonary edema compared with untreated mice. HSF decreased inflammatory cytokines, especially TNF-α (9). A dried 30% ethanolic extract of ivy leaves is the most widely used formulation due to its well-established efficacy and tolerability, as proven in many clinical trials (10).

Berberine is a natural product found in some medicinal plants, such as Coptis sp. and Berberis sp., and has a wide range of pharmacological activities, such as an anti-inflammatory action, protection against cardiovascular diseases, and regulation of cholesterol metabolism. Xu et al. showed that berberine attenuates cigarette smoke-induced airway inflammation and mucus overproduction by significantly reducing TNF-α, IL-1β, and monocyte chemoattractant protein-1 levels in a mouse model (11). Lee et al. reported that berberine suppresses inflammatory agent-induced IL-1β and TNF-α production in human lung cells (12).

In this study, AG NPP709 was formulated with a dried 30% ethanolic extract of H. helix L. (ivy; Lamiaceae) leaves and a dried water-saturated butanolic extract of the C. chinensis Franch (Ranunculaceae) rhizome (3:1, w/w). In a phase III clinical trial conducted in South Korea in 2010, AG NPP709 demonstrated efficacy for decreasing cough and sputum compared to a control group prescribed an ivy leaf extract.

This is the first study to assess the efficacy of AG NPP709 in patients with chronic bronchitis type COPD. This 12-week study met the primary endpoint of symptom improvement in patients with chronic bronchitis type COPD, due to reduced phlegm and total CAT score. We noted a significant reduction in serum fibrinogen level as a secondary endpoints. However, PFT and other systemic inflammatory markers, such as CRP, IL-6, IL-33 and TNF-α, were not significantly different after treatment versus baseline. Therefore, concluding that AG NPP709 improves systemic inflammation should be done with caution.

In our study, the adverse effects of AG NPP709 were mild and infrequent. In addition, this study confirmed long-term (12 weeks) safety of AG NPP709 for the first time; in a previous phase III study, AG NPP709 was given only for 5 days.

We did not exclude asthma or emphysema type COPD patients from the study design and patient enrollment process of this study. However, none of the 30 enrolled patients had been diagnosed with asthma before age 40. CT scan had been performed already for the purpose of lung cancer screening in all 30 patients before the enrollment of this study. Bronchitis or bronchial wall thickening was mentioned in official CT reading by radiology specialist in 13 patients. In 21 patients, emphysema in various degree was observed in CT scan. Eleven patients showed both bronchial wall thickening and emphysema.

In general, the use of drugs such as ACE inhibitors, opiates, pregabalin and gabapentin are not allowed in cough related studies. There was no inclusion criterion regarding non-permitted medications in this study. However, we have reviewed all enrolled patients. We have confirmed that ACE inhibitors, opiates, pregabalin, and gabapentin were not administered to any patients enrolled during the study period.

This study had several limitations. First, there was no control group, so the significant improvement seen in the CAT score should be validated in a controlled trial. A large randomized multicenter prospective trial is currently being prepared for this purpose. Second, this study was conducted in an exclusively male population (100%). The main reason for the male predominance is the very low rate of smoking among females in South Korea. Third, the systemic inflammatory markers were not compared to a healthy control group. Fourth, the compliance of medication was not monitored. However, AG NPP709 is an oral medication and easy to take. There was no serious side effect. We have noticed no compliance issue during this clinical trial. Finally, the sample size was small.

Funding: This study was supported by the Ahn-Gook Pharmaceuticals Co., Ltd., Seoul, Republic of Korea. The sponsor had no role in the design of the study, the collection and analysis of the data, or the preparation of the manuscript.

Conflicts of Interest: Both authors have completed the ICMJE uniform disclosure form (available at http://dx.doi.org/10.21037/jtd.2020.03.61). The authors have no conflicts of interest to declare.

Ethical Statement: The authors are accountable for all aspects of the work in ensuring that questions related to the accuracy or integrity of any part of the work are appropriately investigated and resolved. Approval was obtained by the Institutional Review Board (IRB) of Seoul St. Mary’s Hospital (IRB approval No. 2017-3400-0006) and written informed consent was obtained from all patients.