Lung cancer is the most prevalent and fatal cancer in Chinses population with the non-small cell lung cancer (NSCLC), accounting for 80–85% of all lung cancer cases and being the most significant subtype (1). NSCLC is further divided into squamous cell carcinoma, large cell carcinoma, adenocarcinoma and others, among which non-squamous NSCLC accounts for half of all NSCLC cases. In clinical settings, most NSCLC patients are diagnosed as locally advanced or systematically metastasized diseases; thus, curative surgery is unprocurable. Instead, the targeted therapy for patients with targetable genetic aberrations [such as epidermal growth factor receptor (EGFR)] improves the survival of advanced NSCLC patients. However, for patients lacking targetable genetic aberrations, chemotherapy remains the only option (2,3). Although chemotherapy, as first-line option, has brought certain benefits and there exists the choice of second-line therapy, the clinical outcomes for advanced NSCLC patients are barely satisfactory, especially when the patients fail the first-line therapy.

In various malignancies, angiogenesis is an essential mechanism for tumor growth, metastasis and recurrence. Among cancer therapeutic strategies, anti-angiogenesis agents, in combination with chemotherapy or not, have shown survival benefits in advanced-stage malignancies (4). Vascular epidermal growth factor receptor 2 (VEGFR2) is specifically responsible for angiogenesis functioning via regulating multiple signaling pathways (5). Therefore, VEGFR2 inhibitors including receptor-specific antibodies and small molecule drugs have been developed, and a few of them have been approved as standard treatment for advanced malignancies (4). Apatinib is a small molecular vascular epidermal growth factor (VEGF) tyrosine kinase inhibitor (TKI) that binds and targets the intracellular domain of VEGFR2. It has been used in advanced malignancy patients who fail the prior chemotherapy and other targeted therapies (6). The use of apatinib has been approved by FDA and cFDA for advanced gastric cancer, and supportive data from several randomized, double-blinded, placebo-controlled clinical trials illustrate that apatinib significantly improves progression-free survival (PFS) and overall survival (OS) with acceptable safety in patients with advanced gastric cancer including those who have failed two or more lines of chemotherapy (7,8).

As for advanced NSCLC, favorable survival outcomes are observed after treated with apatinib, and the drug-related toxicity is tolerable and controllable (9-11). Also, the combination of apatinib with cytotoxic drugs such as docetaxel has been proven effective in treating advanced NSCLC (12). In a previous multi center prospective study, apatinib plus docetaxel achieves ORR of 33.33%, DCR of 66.67% and median PFS of 2.92 months as the second or above line treatment in advanced non-squamous NSCLC (12). However, whether apatinib combining docetaxel would improve the treatment outcomes of advanced non-squamous NSCLC patients with wild-type EGFR is seldom reported, only a phase I trial shows promising safety and treatment response to apatinib plus docetaxel in 12 advanced lung adenocarcinoma patients with wild-type EGFR (13). Therefore, in this multi-center, phase II trial, we aimed to investigate the treatment response, survival profiles and treatment-related adverse events (AEs) of apatinib plus docetaxel in treating advanced non-squamous NSCLC patients with wild-type EGFR.

This phase II trial (Chinese Clinical Trial Registry Number: ChiCTR1800020105) was approved by the Ethics Committee of our hospital (Ethical Approval Number: 2016NZKY-014-01) and conducted in accordance with the provisions of the Declaration of Helsinki and Good Clinical Practice guidelines as defined by the International Conference on Harmonization. All patients signed the informed consents prior to enrollment and were voluntary to comply with treatment protocol, follow-up assessments and procedures.

All patients received combined therapy of apatinib (Jiangsu Hengrui Medicine Co., Ltd, China) and docetaxel (Jiangsu Hengrui Medicine Co., Ltd, China) (Table S1). The apatinib was administered as follows: oral dose of 500 mg once daily until intolerable toxicity, disease progression, or death. A continuous 28-day treatment was defined as one treatment cycle. Dose reduction to 250 mg once daily of apatinib was allowed if patients experienced grade 3/4 hematologic AEs, or other non-hematologic AEs that the investigators considered it was necessary to reduce dose. The docetaxel was administered at dose of 60 mg/m2 intravenously over 1 h, repeated every 3 weeks which was defined as one treatment cycle, and continued for 4–6 cycles. Treatment cessation criteria for this trial were: (I) subjects withdrew their informed consents; (II) disease progression confirmed by imaging examination; (III) subjects were still intolerable to the toxicity after dose adjustment; (IV) other circumstances where the researcher considered it necessary for subjects to withdraw from the trial. Besides, after trial discontinuation, apatinib plus docetaxel or combined chemotherapy was allowed for patients with disease progression at the discretion of the investigators and patients.

Twenty-nine patients were included in response and survival analysis, and one patient without response and survival assessments due to early lost follow-up was excluded. While all 30 patients were included in the safety analysis. Descriptive analysis was displayed as mean and standard (SD), median and interquartile range (IQR), or number and percentage [No. (%)]. PFS and OS were illustrated by Kaplan-Meier survival curves. Statistical analysis was performed using SPSS 22.0 software (IBM, USA).

Thirty NSCLC patients were eligible for enrollment, and signed the informed consents (Figure 1). All patients received apatinib plus docetaxel treatment, and 8 of them continued treatment but 22 of them discontinued due to disease progression (n=15), death (n=6), lost follow-up after 3 doses of apatinib (n=1). Finally, 29 patients were included in response and survival analysis, while 1 patient without response and survival assessment due to early lost follow-up was excluded; meanwhile, all 30 patients were included in the safety analysis. 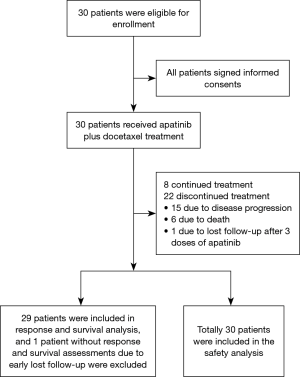 Since one patient lacked response and survival assessment due to early lost follow-up, 29 patients were included in treatment response and survival analysis. Assessment of treatment response revealed that no patient achieved CR (0.0%), 8 patients achieved PR (27.6%), 20 patients were with SD (69.0%), and 1 patient were with PD (3.4%), resulting in ORR and DCR of 27.6% and 96.6%, respectively (Figure 2). Besides, tumor size was recorded at each examination and the change of tumor size compared with baseline of each patient was shown in Figure 3. 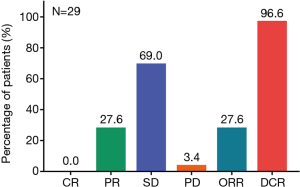 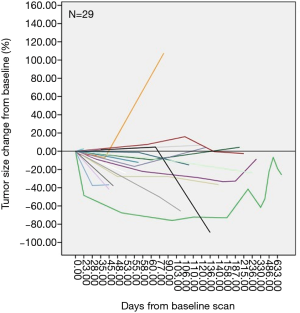 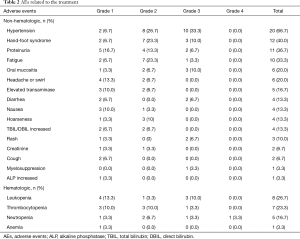 Docetaxel is recommended as the second-line chemotherapy for advanced NSCLC patients with wild-type EGFR (17). Previous report reveals the median PFS and OS to docetaxel as 4.2 and 9.4 months respectively in advanced non-squamous NSCLC patients (18). Despite that, the combination of anti-angiogenesis receptor TKI with docetaxel improves PFS in advanced NSCLC patients. For instance, in a phase III, double-blind and randomized-controlled clinical trial, nintedanib (anti-angiogenesis receptor TKI) in combination with docetaxel notably improves PFS and OS compared with docetaxel plus placebo in patients with previously treated NSCLC, especially in those with adenocarcinoma (19). Additionally, combination of apatinib with chemotherapy agents, yields better treatment outcomes, including inhibiting the proliferation of NSCLC cells, reducing the micro vessel density and anti MAPK-ERK and PI3K-AKT-mTOR signaling pathway activation compared with apatinib monotherapy in NSCLC mouse xenograft model (20). These studies illustrate that there may be a synergizing effect of anti-angiogenesis receptor TKI combined with cytotoxic drugs in treating advanced NSCLC.

The common apatinib-related AEs include hypertension, proteinuria, hand-foot-skin reaction, fatigue, oral mucositis and hematologic toxicity. In a clinical trial using apatinib as the second-line treatment for advanced NSCLC, the incidences of AEs are hypertension (53%), hand-foot reaction (47%), proteinuria (41%), fatigue (21%), anorexia (19%), and hematologic toxicity (15%); and no grade 4 AE is observed (15). For the AEs with higher grade (grade 3/4), a previous pooled analysis reports grade 3/4 hypertension (7%), proteinuria (3%), hand-foot-skin reaction (6%), fatigue (4%), decreased appetite (1.1%), oral mucositis (3%), and thrombocytopenia (3%) in advanced NSCLC patients treated with apatinib alone (14). Regarding docetaxel, the related AEs are mostly neutropenia, fatigue, nausea and alopecia. Since this study used apatinib plus docetaxel, the common treatment-related AEs included hypertension (66.7%), hand-foot syndrome (40.0%), proteinuria (36.7%), fatigue (33.3%), oral mucositis (20.0%), headache or swirl (20.0%); and hematologic toxicities including leukopenia (26.7%), thrombocytopenia (23.3%) and neutropenia (16.7%). Most AEs were at grade 1–2, and there existed only 1 case of grade 4 AE which was neutropenia. Taken together, the common AEs of apatinib plus docetaxel were predictable according to the AEs of apatinib or docetaxel alone, and that the high-grade AEs were rare, indicating that apatinib plus docetaxel had reasonable and controllable safety profiles in treating advanced non-squamous NSCLC with wild-type EGFR.

As a single-arm, multi-center, phase II trial, this study existed several shortcomings. The sample size was relatively small (N=30), which might slightly reduce statistical power. In addition, since this was a single-arm trial, whether apatinib plus docetaxel was comparable to apatinib/docetaxel alone required further validation by randomized, controlled trial; and whether there existed synergizing effect of apatinib and docetaxel in treating advanced non-squamous NSCLC needed to be investigated by further studies.

Conflicts of Interest: All authors have completed the ICMJE uniform disclosure form (available at http://dx.doi.org/10.21037/jtd.2020.03.54). YS serves as an unpaid editorial board member of Journal of Thoracic Disease from Mar 2012 to Mar 2022. The other authors have no conflicts of interest to declare.

Ethical Statement: The authors are accountable for all aspects of the work in ensuring that questions related to the accuracy or integrity of any part of the work are appropriately investigated and resolved. This phase II trial (Chinese Clinical Trial Registry Number: ChiCTR1800020105) was approved by the Ethics Committee of our hospital (Ethical Approval Number: 2016NZKY-014-01) and conducted in accordance with the provisions of the Declaration of Helsinki and Good Clinical Practice guidelines as defined by the International Conference on Harmonization. All patients signed the informed consents prior to enrollment and were voluntary to comply with treatment protocol, follow-up assessments and procedures.