The right medial basal segment (RS7) is the smallest volume of all lung segments (1). The definition of B7a and B7b is still unclear (2). Anatomic features and surgical techniques focusing on S7 segment have been few reported (3). Here we present 3 cases of anatomic S7 segmentectomy, describing the surgical techniques and proposing a new nomenclature for B7a and B7b.

A 50-year-old female patient was admitted to our hospital for a lesion in right lower lobe (RLL). A high resolution computed tomography (HRCT) scan revealed a 13-mm GGO (ground glass opacity) in S7. Preoperative 3D-CTBA shows that B7 is anterior to inferior pulmonary vein (IPV), and there exist the B* for this patient. The intrasegmental vein is V7a and V7a’, that drain into the basal vein. The intersegmental vein is V7b, which drain into V8+9 (Figure 1). The main utility incision and observing port was made in the fourth and seventh intercostal space in anterior axillary line. Two assistant incisions were made in the seventh intercostal space in mid-axillary line and ninth intercostal space in posterior axillary line. The oblique fissure is first divided between the right middle lobe and the right lower lobe to identify the interlobar pulmonary artery and the A7 artery. The A7 artery is ligated and resected (Figure 2). The B7 bronchus, which runs on the ventral side of the IPV, is dissected and isolated, but not resected (Figure 3). Next, the right lung is ventilated by anesthesiologist using 100% oxygen. About 10 minutes later, a boundary is found between the inflated and deflated lung parenchyma to allow visualization of the anatomic intersegmental plane. The demarcation line was marked by electrocautery. During the 10-minutes-waiting, the B7 bronchus was resected using a stapler. The stump of the B7 bronchus was ligated with 2-0 silk and elevated. The intersegmental plane between S7 and S6, S8-10 was dissected using electrocautery along the demarcation line. During the process of intersegmental plane dissection, we can identify and cut two thin veins (V7a and V7a’), the intrasegmental veins that drain directly into the basal vein (Figure 4). The dissected plane is covered with nothing (Figure 5). The patients’ backgrounds and surgical outcomes were summarized in Table 1. 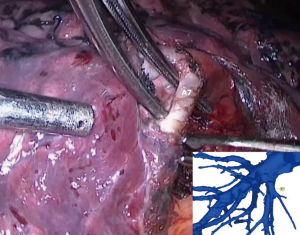 Figure 2 The A7 artery in surgery and 3D-CTBA. 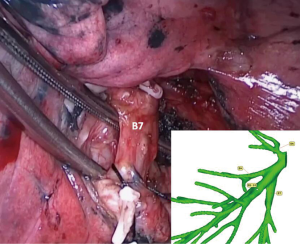 Figure 3 The B7 bronchus in surgery and 3D-CTBA. 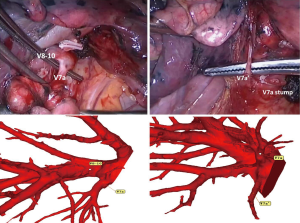 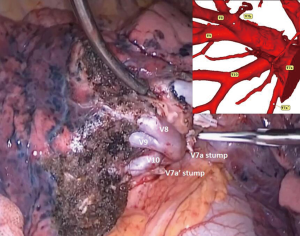 Figure 5 The vein in surgery and 3D-CTBA. 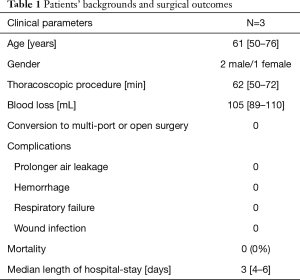 RS7 is a very small segment and is rarely reported. In Kimihiro Shimizu’s study, B7a runs anterior to the inferior pulmonary vein (IPV), and the B7b runs posterior to the IPV (3). However, in the book of Hiroaki Nomori and Morihito Okada (4), B7a was defined dorsal (posterior) and B7b was ventral (anterior). By looking into history, we found the dilemma that in the definition of Boyden in 1951 (5), B7a was anterior and B7b was posterior. However, disputes start in 1953 when Nagaishi defined B7a as anterior in the figure of his article while in the table, he redefined B7b as anterior (2). Similar situation was found in the book of Ikeda in 1974. In the table about the nomenclature of segmental/subsegmental bronchus, B7a was defined anterior; in the endoscopic illustration, B7a was redefined posterior (6). The contrary definitions of B7 branches may cause inconvenience in medical communications, and more importantly, it may cause misunderstanding between medical stuffs, even medical lawsuits. To avoid this problem, we suggest to use a (anterior) and p (posterior), instead of a and b. The B7 anterior to the IPV was B7a; B7 posterior to the IPV was B7p. The new nomenclature is anatomy-based, and easy to understand.

The inflation-deflation method for the identification of intersegmental plane is widely utilized. The artery, vein and bronchus of the target segment is ligated and resected. Then the lung is ventilated manually using 100% oxygen to achieve a full re-expansion, which always requires a high pressure. The target segment is inflated through the pores of Kohn. About 10 minutes later, the O2 in adjacent lung segments is transported by blood circulation so that the lung is deflated; the O2 in target segment, cannot be transported by circulation, is still inflated. The border between the inflated and deflated lung parenchyma is visualized. We made a small modification for this method. After the artery and vein of the target segment is ligated and resected, we require the anesthesiologist to ventilate the lung using 100% oxygen. Because the bronchus is only dissected but not resected at this moment, it is easy to achieve a full re-expansion with a relatively low pressure. During the 10-minutes-waiting, the target bronchus is resected by stapler. This method could reduce pressure-related damage of lung caused by manual ventilation. Besides, it saves time by utilizing the 10-minutes-waiting period for the resection of bronchus.

Conflicts of Interest: All authors have completed the ICMJE uniform disclosure form (available at http://dx.doi.org/10.21037/jtd.2020.04.03). The authors have no conflicts of interest to declare.