Extracorporeal membrane oxygenation (ECMO) is essential for the treatment of refractory cardiac or pulmonary failure. Its implementation, however, is frequently plunged by bleeding complications, whose rate ranges between 10% and 30% in the ECMO runs (1). Indeed, systemic anticoagulation (SA) although appropriate to enhance uneventful blood/foreign surface contact, avoiding thromboembolic events as well as ECMO system malfunction, is responsible for the majority of the haemorrhagic events and have been representing a contraindication for ECMO application in specific challenging clinical backgrounds (2,3). Haemorrhagic shock, traumatic injuries, and severe active bleedings are only a few of them (4). Sepsis-associated or post-cardiotomy cardiogenic shock are also two relevant pathophysiological conditions, in which haemostatic homeostasis is compromised respectively by infection-related acquired coagulopathy (5) and the effects of systemic heparinization during cardiopulmonary bypass, making ECMO-related anticoagulation a threat for further coagulation disorders and intractable bleeding (6,7).

In all of the above-mentioned clinical scenarios, minimizing anticoagulation might be advantageous to reduce bleeding-related complications during ECMO support, and, in selected cases, extracorporeal life support (ECLS) application without SA might be feasible without increasing or limiting the haemorrhagic risk (8,9). The introduction of heparin-bonded extracorporeal tubing, polymethyl-pentene oxygenators, and new generations of centrifugal pumps, allowed a more “coagulation/hemostasis-friendly” management, thereby favouring a number of experiences in which trivial or no anticoagulants were administered during ECMO runs (10,11). However, the actual feasibility and therapeutic potential of ECMO without anticoagulation, along with optimal management strategies during its application, are yet to be elucidated.

The present case series describes a limited clinical experience of ECMO support without administration of heparin or alternatives due to ongoing intractable bleeding or in high-risk condition for refractory haemorrhage in patients requiring extracorporeal circulatory or respiratory support.

This study was approved by the ethical committee of the local institution (Maastricht University Medical Centre, Maastricht, The Netherlands; No. METC 2018-0788). From January 2015 to December 2018, all the patients considered for ECLS were found and examined.

Veno-venous (VV) ECMO was instituted in the presence of refractory hypoxemia (paO2 <60 mmHg) and persistent desaturation (SaO2 <80%) under maximal mechanical ventilation therapy. Indications for veno-arterial (VA) ECMO were hemodynamic instability or difficult weaning from cardiopulmonary bypass, remaining in low cardiac output syndrome, despite adequate inotropic therapy and use of intra-aortic balloon pump (IABP). ECMO was positioned in the cardiac operating room or in the Cath lab.

Post-cardiotomy patients received protamine sulphate to reverse heparin effect, and persistent bleeding conditions were treated by the use of blood products and recombinant factor VII. SA was avoided in patients with severe active bleedings or affected by conditions associated with high haemorrhagic risk (see Table 1). Contraindications to anticoagulants and anticoagulation strategies for each patient were discussed by the multidisciplinary team.

Oxygenator function (gas exchange performance and blood pressure drop) and status (macroscopic inspection), were assessed hourly. Oxygenator back-up and immediate and quick exchange of the circuit urgently were guaranteed for the entire duration of support. Direct inspection of the oxygenators, pump and cannulas was performed after ECMO weaning.

Six patients (3 males and 3 females, age range, 25–85 years) underwent ECMO without SA. The most common indication (3 patients) was the presence of pulmonary haemorrhage after cardiac surgery or multiple trauma. Other indications for ECMO support were related to conditions at high risk for refractory pulmonary or general bleeding, or to a high risk for bleeding and need for gas exchange support during surgical procedure at the trachea level (Table 1).

V-V ECMO was established in two patients, in the same cases heparin uncoated cannula were used. Tip-to-tip heparin-coated circuits were used for the V-A ECMO in 4 patients. Peripheral cannulation through the femoral vessels was performed for all the subjects. In all the three post-cardiotomy patients, intra-operative heparin, administered to conduct extracorporeal circulation, was fully reverted by protamine.

No oxygenator malfunction, nor pump-head failure, or circuit thrombosis were observed. All the patients were successfully weaned from ECMO without thromboembolic complications. Overall survival rate was 50%, cause of death was sepsis for two patients and multiple organ failure (see Table 3). The direct inspection of all the circuit components didn’t show any thrombotic deposition (Figure 1). 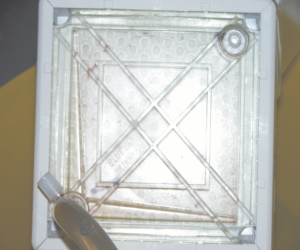 Figure 1 Oxygenator without thrombotic deposition after 12 hours of performance.

SA is commonly considered mandatory during ECMO but, despite improvements in technology and monitoring strategies (12), its side effects, mainly related to bleeding events, have not decreased in the last years (13). Bleeding represents the most common complication in ECMO patients and often associated with increased mortality (14).

The interaction between blood and foreign materials plays a critical role in the activation of both coagulation and inflammatory cascades, favoring a concurrent systemic pro-hemorrhagic and pro-thrombotic state (15,16). Haemorrhages may occur at the cannula or catheter insertion sites, at recent surgical incisions, at gastro-intestinal, urinary tract, abdominal or thoracic cavities, but also in the brain, or in lungs and airways (17). Significant untreatable bleedings or high-risk bleeding conditions, moreover, are exacerbated by anticoagulants, whose administration represents a contraindication for ECLS according to Extracorporeal Life Support Organization (ELSO) guidelines in such circumstances (3). In post-traumatic scenario, multiple organs are frequently injured and impaired, with bleeding acting as a common cause of mortality (4). During post-cardiotomy ECMO for the treatment of acute heart failure following cardiac surgery, the destructive effects of cardiopulmonary bypass on the coagulation system are still active, and massive haemorrhagic complications are even more frequent (7,18). Finally, subjects suffering from sepsis-associated cardiogenic shock have a relevant haemorrhagic risk, due to the concomitant sepsis-associated coagulopathy (5).

Progressive technological advances, such as heparin-coated extracorporeal circuitry and cannulas, polymethyl-pentene oxygenators, and new generations of centrifugal pumps, prompted several investigators to explore the possibility to use mild anticoagulation regimen in challenging scenarios. Indeed, excellent survival and low complication rates were shown in 42 ECMO patients receiving only low-dose heparinization, and despite frequent interruption of anticoagulation during mechanical support (19). Prolonged heparin-less ECMO run was also shown feasible and safe in post-traumatic lung failure had been treated using ECMO initially without heparin, administered only after 5 days from the beginning of mechanical support (20). A low activated partial thromboplastin time (APTT) had also proven to be effective and safe during V-V ECMO run (10). A group of polytraumatic patients, affected by bleeding shock, was successfully treated by ECMO with the administration of only an initial bolus of heparin without any subsequent anticoagulant infusion (21). Furthermore, in selected cases, ECMO has been successfully positioned completely even without anticoagulation therapy at all (22-24).

Incidence of ECMO system malfunction related to clot formation during support without SA appeared highly variable among the previously published experiences. In a population of 8 patients treated by V-V ECMO without SA for concomitant active bleedings, the oxygenator thrombosis was observed in all the subjects, and oxygenator change was required in half of the patients for worsening gas-exchange capability and of pump-head thrombosis in 1 case (8). This group received ECMO after two weeks from cardiac surgery, probably enough time for losing all the effects of the anticoagulants used during cardio-pulmonary bypass. In contrast, another group of patients who received V-A ECMO for post-cardiotomy cardiogenic shock, at an earlier stage after cardiac surgery, showed only 8% of oxygenator change rate (9). All these cases received protamine, but a contribute from the “heparin rebound” effect to the establishment of an hypocoagulable state should be taken into account (25).

In our patients’ series, ECMO without anticoagulation was feasible and void of overt thromboembolic complications. No clots were observed in the entire circuit and no pump malfunction, requiring ECMO system replacement, was registered. ECMO system malfunction, particularly at the oxygenator level, may generate high-risk conditions, like sudden impairment of gas exchange performance of the device with patient desaturation, thromboembolic complications, particularly dreadful in the V-A mode, or even reduced circulatory support favoring hemodynamic instability (26), but none of these events occurred in any of the supported subjects.

In our limited series, half of our patients underwent post-cardiotomy ECMO and received protamine to reduce the perioperative bleeding risk, but none of them experienced overt thromboembolic complications during mechanical support. In line with some experiences in current literature, despite being considered a contraindication in ECMO patients, protamine doesn’t seem to immediately jeopardize ECMO circuit functioning and could be even beneficial for haemostatic homeostasis (9,27). A prolonged effect of intra-operative anticoagulation cannot, however, be completely excluded.

The demonstration of clot-free circuits also at the direct inspection following ECMO removal in our patients, provided a strong evidence of the absence of sub-clinical thrombosis as well given the high incidence of under-diagnosed clotting during ECMO runs (28).

Due to the high risk of thromboembolic events, adequate precautions in the technical management and round-the-clock monitoring of the patient had to be provided. First of all, sustained blood flows have been preferred, in accordance with the experiences of Ryu and co-workers (29). Additionally, the duration of support had a key role and have been minimised as much as possible; previous reports had shown higher thromboembolic complication rates for prolonged duration of supports and had already suggested a possible time-dependency of their incidence (8).

Our data should be interpreted with caution. The limited patient number and ECMO duration cannot provide conclusive information regarding this ECMO management. Furthermore, no autopsy was performed in the dead patients, making the lack of clinical diagnosis of embolic events, either in the venous or arterial vasculature, another limitation for claiming absence of embolic events, although no sign of neurologic complication was observed during the ECMO run requiring deeper neuroimaging control. Undiagnosed thromboembolic events may occur in up to 50% of the ECMO patients, although these episodes are directly associated with the ECMO duration, which was short in our experience (30).

ECMO without anticoagulation was shown to be feasible in patients with severe active bleedings or at high risk for bleeding. In this specific setting, dedicated management protocols and strict monitoring and control are required and prevent thromboembolic complications and circuit malfunctioning, even in subjects treated with protamine.

Further investigations are needed to better evaluate actual extensive feasibility of ECMO without SA, and to assess its potentiality or limitations in a broader spectrum of clinical backgrounds.

Conflicts of Interest: All authors have completed the ICMJE uniform disclosure form (available at http://dx.doi.org/10.21037/jtd.2020.04.54). RL reports other from Medtronic, other from LivaNova, other from EUROSETS, outside the submitted work. MK serves as an unpaid editorial board member of Journal of Thoracic Disease from Sep 2018 to Aug 2020. The other authors have no conflicts of interest to declare.

Ethical Statement: The authors are accountable for all aspects of the work in ensuring that questions related to the accuracy or integrity of any part of the work are appropriately investigated and resolved. This study was approved by the ethical committee of the local institution (Maastricht University Medical Centre, Maastricht, The Netherlands; No. METC 2018-0788).