The epidemiology and biology of pulmonary metastases

Pulmonary metastases are a common occurrence in patients with extrathoracic cancer. Our goal in this chapter is to explore the complex processes of metastasis and why there is a predisposition for this to occur in the lung. In addition, we aim to describe the incidence of pulmonary metastases in various contexts and based on the origin of the primary tumor.

The process of metastatic spread involves many complex events. The pathophysiology of pulmonary metastasis is initiated with the growth, neovascularization, and tissue invasion of the primary tumor. Subsequently, there is detachment of cells from the primary tumor and hematogenous dissemination where these cells may arrest and proliferate in capillary beds. After surviving host defense mechanisms, the tumor cells extravasate into larger arteries and extend into organs by adhering to the basement membrane (1). There are many host-factors that must act in concert for this process to occur, including cell adhesion molecules, motility, growth and angiogenesis factors and various cytokines (2,3).

There are unique characteristics of the pulmonary system that make metastases more likely to occur in the lung than anywhere else in the body. Schueller et al. describe these features well, “The lungs receive the entire cardiac output every minute. They also have the densest capillary bed in the body and are the first capillary plexus that most of the lymphatic drainage meets after entering the venous system. In addition, the lungs consist of a meshwork of delicate membranes that easily entrap tumor cells which can readily draw on nearby oxygenated air for sustenance.” (4). These characteristics provide an ideal situation and environment for the cascade of events to occur that lead to metastases in the lung. The rate of growth of metastases was studied by Spratt et al. They performed a radiographic study of 118 patients with untreated pulmonary metastases and demonstrated, through mathematical calculation and radiographic correlation, that the rate of growth of the pulmonary metastases was exponential (5).

There are multiple routes of metastasis to the lung from extra thoracic tumors. Certain groups of extrathoracic tumors have characteristic patterns of spread attributed to the unique and complex series of events that must occur for metastasis to succeed. The most common route of metastasis is a hematogenous mechanism. This pattern of spread is first initiated with detachment of cells from the primary tumor and hematogenous dissemination of the cells into pulmonary capillary beds. A minority of these cells will survive host defense mechanisms and penetrate the pulmonary interstitium, leading to metastatic growth (6). It is also possible for the pulmonary vasculature to be seeded at the same time as dissemination in other capillary beds such as the liver, bone or brain. In addition, there are situations where hematogenous spread occurs only after other capillary beds have been seeded, such as prostate or breast cancer. Metastatic spread can also occur via lymphatic channels—regional lymph nodes become the site of collection, which commonly occurs with endobronchial metastases (7).

As previously described, pulmonary metastasis is a complex process of tumor cell dissemination from the primary tumor to the lungs. There are currently two major concepts of metastasis that may influence the approach of clinicians (8). Fidler et al. describes a theory of late dissemination of metastases. This is postulated to occur after genetic changes to the primary tumor and surrounding environment have occurred that are sufficient for migration and spread (9). A different theory suggests metastasis occurs via early dissemination. Morgan et al. describes a process of early shedding of single cancer cells. There is a subsequent dormant stage where the cells may acquire genetic and environmental alterations that trigger proper metastasis and lead to delayed recurrence (10). Both theories of metastasis may occur separately or together within different tumor types and individuals—rendering the genetic composition and characteristics of pulmonary metastases unique and complex to treat.

For lung metastases to grow, adequate nutrition is needed via a viable blood supply. In the lung, there are three possible routes: bronchial circulation, pulmonary circulation, or both. The route of blood supply to the metastases is important as it can be a means of therapeutic intervention. Historically, it was held that most lung tumors are supplied by bronchial circulation and that pulmonary “neovascularization” did not occur (11-13). However, Milne et al. conducted a computer topographic angiography study of resected human lungs with pulmonary metastases of varying origin which demonstrated that angiogenesis does occur. In addition, there was a pulmonary circulation component in all metastases usually supplying the lateral portion of the tumor (14). The vascularization of pulmonary metastases is variable and complex, often recruiting supply from bronchial and pulmonary origin.

Interestingly, diet may also have a role in tumor growth. Hayman et al. details a study that has shown how a diet high in omega-6 fatty acids has been linked to statistically higher rates of visible lung metastases in mice injected with human breast cancer cells. As well, omega-3 fatty acids have been shown to reduce lung metastases in colorectal cancer, breast carcinoma, and melanoma (15). This is postulated to be due to influences on gene expression which can affect the production of various protein factors.

There are many biochemical factors in the tumor microenvironment that play a key role in the development of lung metastases. Laboratory studies have shown that cellular factors such as vascular endothelial growth factor (VEGF), interleukin-8 (IL-8), platelet-derived endothelial cell growth factor (PD-ECGF), and/or basic fibroblast growth factor (bFGF) play an important role in the tumor microenvironment (16). As well, tumor cells have a role in metastatic invasion with very late antigen 4 (VLA-4) production from hematopoietic progenitor cells. This production of VLA-4 allows for interaction with fibronectin in fibroblasts at premetastatic sites (17). Chemokines are activated by tumor cells through the attraction of immune cells and tumor cells to the lungs via VEGF-A, tumor necrosis factor-α (TNF-α), and transforming growth factor–β (TGF-β) inducing expression of inflammatory chemokines used for lung invasion (18). Once tumor cells are at the site of metastasis, they can anchor to the environment through surface expression of intercellular adhesion molecule 1 (ICAM-1) induced be recruited neutrophils (19). Cellular expression of proteins that enhance anchoring, recruitment of cells and invasion are necessary for lung metastasis. 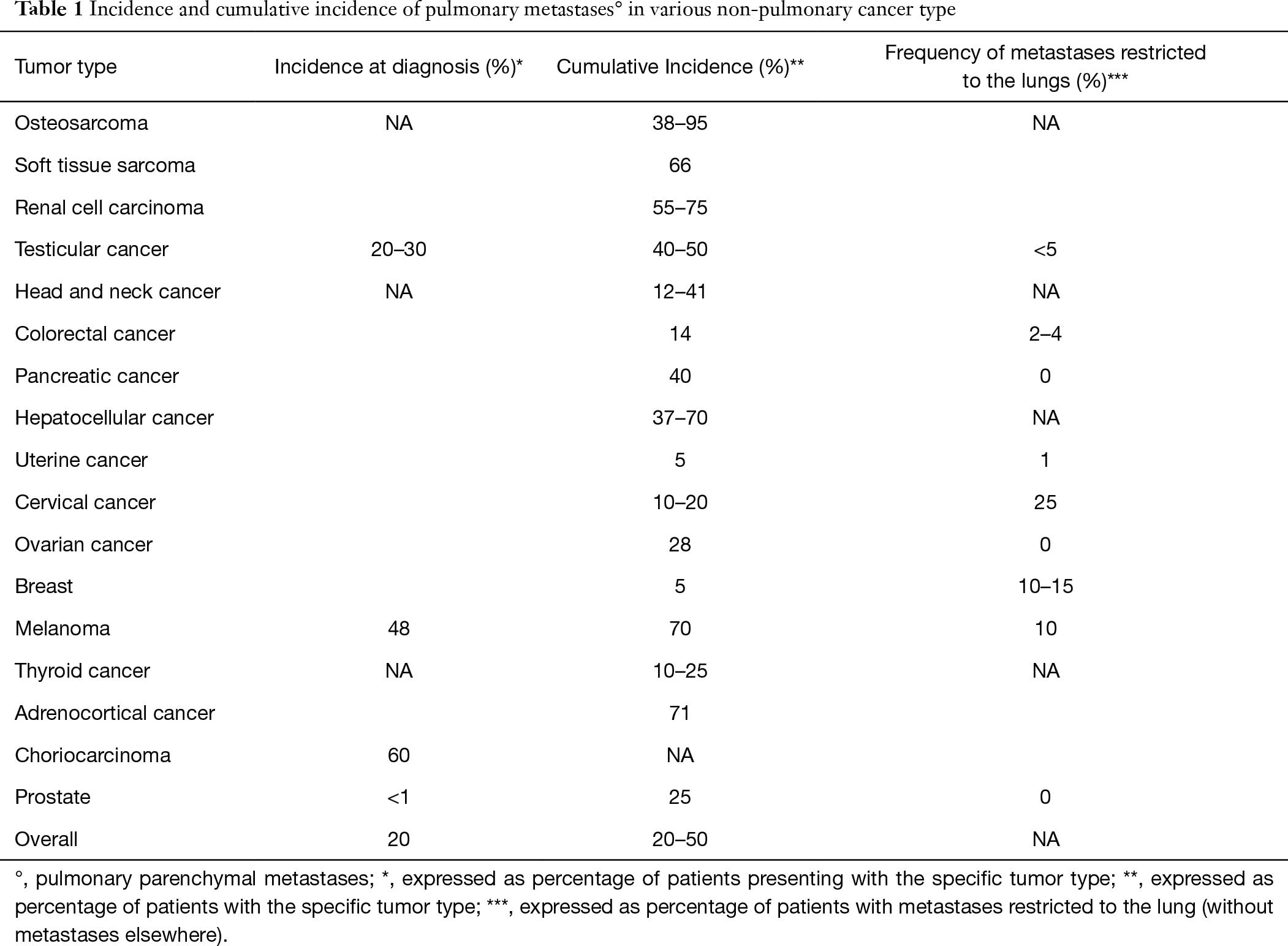 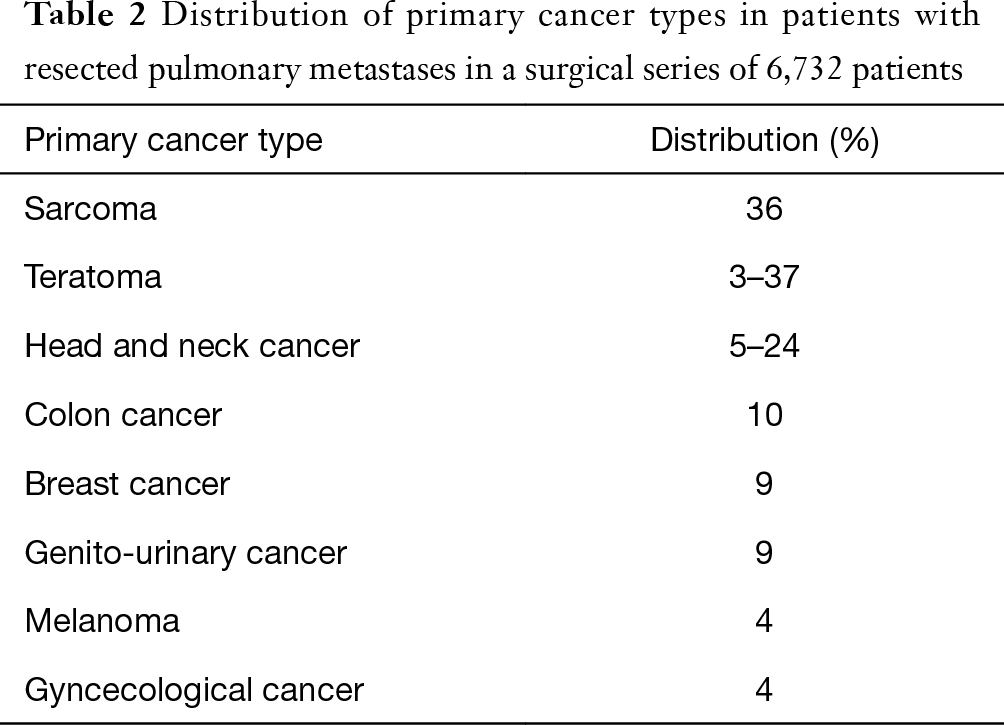 Table 2 Distribution of primary cancer types in patients with resected pulmonary metastases in a surgical series of 6,732 patients
Full table

Conflicts of Interest: All authors have completed the ICMJE uniform disclosure form (available at: http://dx.doi.org/10.21037/jtd.2020.04.28). The series “Pulmonary Metastases” was commissioned by the editorial office without any funding or sponsorship. The authors have no other conflicts of interest to declare.