Lung cancer is one malignant cancer of the highest incidence and mortality rates all around the world (1). About 80% of the patients are non-small cell lung cancer (NSCLC) patients (2). Most lung cancers are diagnosed in the advanced stage. Currently, only 30% of NSCLCs can be surgically removed, but the 5-year survival rate is low (3). Traditional radiotherapy and chemotherapy have not been effective in treating patients with advanced lung cancer, and a new method for seeking treatment of lung cancer has become an urgent problem. Tumor invasion and metastasis is a malignant marker of lung cancer, and it is also the main cause of treatment failure and death. In-depth study of genes involved in lung cancer invasion and metastasis can help to explore the etiology of lung cancer and provide a potential basis for molecular typing and individualized treatment of lung cancer.

CD276 serves as a new member of the B7 family of costimulatory molecules, and its receptor has been unknown (4). B7 superfamily molecules have the function of initiating and maintaining T lymphocyte-mediated immune responses (5). The human CD276 gene is located on chromosome 15q24.1. Nucleotide sequence analysis indicated that CD276 is 951 bases in length and encodes 316 amino acids (6). The protein has a signal peptide at the amino terminus, including immunoglobulin-like variable regions. The extracellular segment of the constant region and the transmembrane region and the 45 amino acid cytoplasmic region belong to the immunoglobulin superfamily and are type I transmembrane proteins.

CD276 is specifically expressed in a variety of tumors, and the expression is closely related to clinical prognosis. In ovarian cancer, CD276 positively expressed ovarian tumor blood vessels are often associated with short survival and high cancer recurrence rates (7). In colon cancer, 54.3% of cancer patients had high expression of CD276, and the expression intensity of CD276 was positively correlated with tumor grade (8). In addition, the high expression of CD276 in cancer tissues was negatively related with the number of tumor infiltrating lymphocytes, and positively correlated with lymph node metastasis and tumor malignancy (9). Recent evidence shows that, although CD276 is considered an immune co-stimulator, it also plays a role in suppressing T cells and immune evasion, leading to tumor development (10). In addition, CD276 can play a certain role in the progression of cancer invasion and migration, angiogenesis and other processes, including its epigenetic effects through gene modification and regulation. Its selective expression on tumor cells makes it an attractive target.

The human lung cancer cell lines A549 and H460 were purchased from the Shanghai Cell Bank of the Chinese Academy of Science (Shanghai, China). The lung cancer cells were cultured in high glucose medium DMEM containing 10% fetal bovine serum (Gibco, USA). All cells were incubated at 37 °C in a 5% CO2 incubator.

Cells were harvested and lysed by using RIPA buffer, then mixed with 1x loading buffer, samples were separated by 10% SDS-PAGE gel electrophoresis and transferred to PVDF membranes (Millipore, Billerica, MA, USA). The membrane was blocked with 5% skim milk for 1 hour at room temperature, incubated with primary antibody overnight at 4 °C, and then incubated with secondary antibody for 1 hour at room temperature. Protein bands were visualized by SuperSignal chemiluminescent substrate (Millipore, Billerica, MA, USA). GAPDH is used as a load internal reference.

Total RNA isolation and cDNA preparation were carried out as previously described (11). PCR was carried out using SYBR Premix Ex Taq II (RR820A, Takara, Japan). The specific primers were used for amplification. The relative quantification of gene expression for each sample was conducted using the ΔΔCT method. Each experiment was performed in triplicate.

A Transwell chamber with an 8 µm aperture was used. Forty-eight hours after cell transfection, the cell suspension was transferred to the upper chamber coated with Matrigel. A medium containing 20% fetal calf serum was added to the lower chamber. The cells in the upper chamber were fixed in cold methanol for 30 minutes, and then stained with 1% crystal violet for 30 minutes. The number of cells on the underside of the filter was counted under a microscope. Different fields of view were randomly selected and then an average count was performed.

The density of seed cells entering a 12-well tissue culture plate reached a confluence of about 70–80% monolayer after 24 hours of growth. The center of the hole was gently stroke with a new 10 µL pipette tip and the single layer was gently scratched. After the scratch, the medium was gently washed twice with a medium to remove the separated cells. The cells were incubated for an additional 48 hours and then the stained monolayer photographs were taken under a microscope.

The cells were collected and plated into 6-well plate, 500 cells per well, and three replicate wells were set. Cells was incubated for a few hours in a CO2 incubator at 37 °C and attached to the plate. The cells were incubated for 15 days at 37 °C in a CO2 incubator until the cells in the control plates formed colonies of significantly better size (50 cells per colony is the smallest score). The colonies were stained with Giemsa staining solution.

The proliferative capacity of tumor cells was determined using a Click-iT EdU cell proliferation assay (Thermo Fisher Scientific, C10337). Five hundred µL of Click-iT reaction mixture was added to each well and the plate was shaken briefly to ensure thorough mixing. The cells were stored in the dark for 30 minutes at room temperature. The reaction mixture was discarded and each well was washed once with 1 mL of PBS containing 3% BSA. The washings were discarded and the nuclei were stained with DAPI for 5 minutes at room temperature.

CD276 is highly expressed in lung cancer and correlated with prognosis 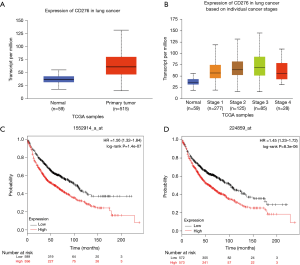 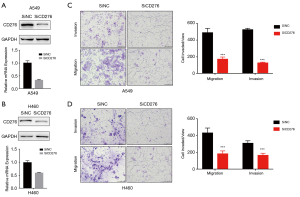 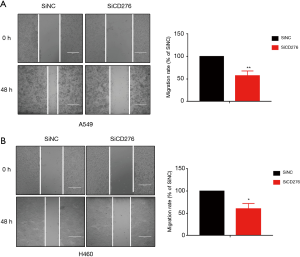 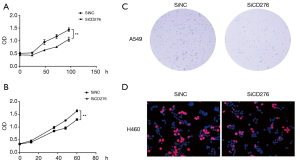 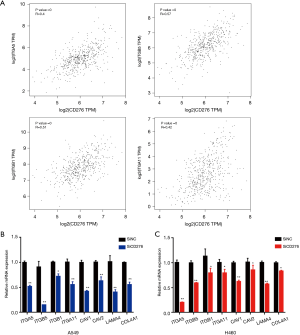 Lung cancer is one of the most common cancers with the highest morbidity and mortality in the whole world. Studies have shown that tumor invasion and metastasis are malignant markers and biological characteristics of lung cancer, and are also the main cause of treatment failure and death in patients. And to explore the molecular mechanism related to it has become a very urgent issue.

More and more research results show that CD276 plays an important role in tumor evolution and distant metastasis. CD276 is overexpressed in tumor tissues, and several human malignant tumors with high expression of CD276 are positively correlated with the malignancy of these diseases (12), and the expression level of CD276 is invasive with tumor tissue or the clinical stage of tumor (13). There was a significant correlation between the probability of recurrence and death or the survival time of the patient (8,14,15). Chavin et al. found that in patients with prostate cancer treated with new hormone-assisted therapy (NHT), the higher the expression of CD276, the more prone to prostate cancer cells to undergo bone metastasis (15). The studies have revealed that the mRNA and protein levels of CD276 are increased in human gastric cancer tissues, and CD276 is positively correlated with postoperative survival rate (16). In colon cancer, 54.3% of cancer patients have high expression of CD276, and the expression intensity of CD276 is positively correlated with tumor grade (8). In ovarian cancer, the ovarian tumor blood vessels owning positive CD276 expression are often associated with short survival and high cancer recurrence rates in patients (7). Through immunohistochemical analysis of clinical specimens, the researchers find that the expression of CD276 is closely related to lymph node metastasis in patients with lung cancer, pancreatic cancer, breast cancer, and hypopharyngeal squamous cell carcinoma (10,17,18). The level of CD276 is closely related to lymph node metastasis and distant metastasis in lung cancer patients (19). The specific mechanism of CD276 in tumor metastasis is unclear.

Integrin is a transmembrane heterodimer composed of two subunits, α and β. The α and β subunits have long extracellular, transmembrane and short intracellular regions. The extracellular region of integrin is connected to the extracellular matrix, while the intracellular region is connected to the cytoskeleton, forming focal adhesions, and mediating the transmission of intracellular and extracellular signals. The focal adhesion composed of extracellular matrix-integrin-cytoskeleton protein is the structural basis of integrin signal transduction. Many signal proteins play a role in integrin-mediated signal transduction by binding to focal adhesion, so that adjust cell adhesion and migration. In our research, we found that CD276 can regulate the expression of multiple integrin-related proteins. Because CD276 is also a membrane protein, we speculate that CD276 can bind to integrin-related proteins, which in turn activates integrin signals and promotes tumor cell migration. However, this needs further experimental confirmation.

Our results showed that higher CD276 levels in NSCLC cancer tissues was associated with tumor stage. We also investigated the impacts of siRNA-mediated CD276 silencing in the lung cancer cell lines, A549 and H460. CCK-8 assay results showed difference between CD276-silenced A549 and H460 cells and controls (P<0.05). In addition, wound healing and Transwell assays showed that CD276 silencing reduced cancer cell migration and invasion. Ours is the first report that CD276 silencing down-regulates integrin-associated proteins. Recent studies have reported that integrin-mediated cell adhesion pathway induces the migration and invasion of cancer cells (20). CD276 may activate integrin signaling, although this requires further study.

In summary, we investigated the role of CD276 in lung cancer cell migration and invasion, proliferation. We showed that CD276 silencing downregulated integrin-associated proteins. Our findings suggest that CD276 and/or its associated molecules, including integrin, may be novel targets for NSCLC therapeutics.

Conflicts of Interest: All authors have completed the ICMJE uniform disclosure form (available at http://dx.doi.org/10.21037/jtd.2020.04.41). The authors have no conflicts of interest to declare.