At present, with development of medical technology video-assisted thoracic surgery (VATS) was used more and more widely in surgical treatment of lung cancer, including the central lung cancer (1,2). Although VATS bronchial sleeve resection or VATS angioplasty has been reported, the VATS double sleeve lobectomy (bronchial sleeve resection and pulmonary sleeve resection synchronously) has been an absolute contraindication for VATS and has forced conversion to thoracotomy. In fact, to date there are very few reported cases of double sleeve lobectomy by VATS (3-5). We lived a “VATS left upper double sleeve lobectomy” in a nationwide academic conference in June 7, 2014, more than 1,500 thoracic surgeons of China witnessed the whole operation. The operation reports as follows.

A 60-year-old male patient, He was admitted to hospital with the over 20 days persistent left chest pain. The patient had a history of smoking over 40 years, 40 cigarettes per day. Chest CT showed that a 4.5 cm × 3.4 cm tumor was in the left upper lobe, with invasion of the left pulmonary artery and bronchial (Figure 1). Brain magnetic resonance and bone scintigraphy has no obvious distant metastasis. This patient had bronchoscopy, and pathological biopsy was squamous cell carcinoma (cT3N1M0). FEV1 was 2.71 L, FEV1% was 93.33%, MVV was 120.6 L/min. 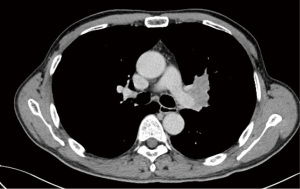 The surgery required a double sleeve lobectomy performed totally using VATS procedures, without the use of a rib spreader while viewing a video monitor (Figure 2). Patient received epidural catheter anesthesia and general anesthesia with dual-lumen endotracheal tubes, and then positioned in the lateral decubitus position with the bed flexed to increase the intercostal spacing. A utility incision was placed in the 3rd intercostal space (ICS). A 3.5 cm silicone rubber wound protector (company information) kept the utility wound open by retracting of the soft tissue. The remaining two incisions for the 10-mm trocars (Johnson & Johnson Investment Co. Ltd., NJ) were used for distal PA forceps and a thoracoscope. The proximal PA forceps was placed through the additional 5 mm incision (the fourth port) located in anterior chest wall at the level of the PA (Table 1, Figure 3A). 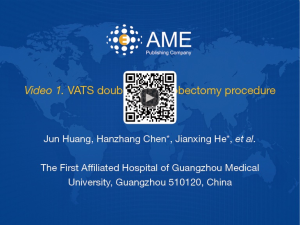 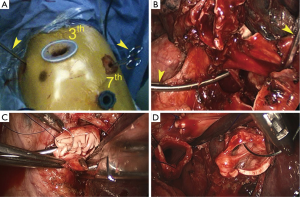 The surgical technique for pulmonary artery circumferential sleeve resection has been detailed in the previous articles. After the PA clamp completed by the vascular forceps, the main PA that had cancer invading its surface was then resected using scissors. After confirming the lack of cancer invasion to the margin, the PA was reconstructed with a primary closure using 4-0 Prolene (Ethicon, Somerville, NJ) (Figure 3). Through the utility incision, a standard needle holder was easily inserted. After a completion of the running suture, the distal clamp was removed before tying the arterial sutures to help remove the intravascular air. The proximal clamp was then removed to ensure hemostasis of the sewn PA.

Bronchial sleeve reconstruction is after angioplasty. We had detailed the surgical technique for bronchial sleeve reconstruction in the previous articles (7,8). The chest is irrigated, and the anastomosis is checked for an air leak under water. Two 28F chest tubes are placed and the incisions are closed. Postoperative bronchoscopy is then performed to clear the airways of blood and secretions before extubation.

The operative time was 230 min. The time of PA clamped was 60 min; the pulmonary artery anastomosis time was 35 min; the pulmonary resection length was 1 cm; bronchial resection length was 1.5 cm; bronchial anastomosis time was 30 min; lymph node dissection station was including station 4-7 and 10, 11; number of lymph node was 34; Patients bleeding was 100 mL; this patient was observed 1 day in the ICU; drainage days after operation was 5 days; postoperative hospitalization time was 7 days .There was no complications.

This patient was diagnosed as squamous carcinoma (pT3N1M0).

Elaborate VATS left upper double sleeve lobectomy, further broaden the VATS indications, confirmed that the patient with central type lung cancer can also choose the minimally invasive treatment, is a hallmark of the VATS technology; because of small trauma and quick recovery, this technique can make more patients with lung cancer benefit. In addition, the technique has a very important role for the thoracic surgeons who have no chance to perform it. But VATS left upper double sleeve lobectomy is still difficult. The surgeon should accept strict training, and prepare for intraoperative bleeding, even have to perform VATS pneumonectomy or conversion to thoracotomy.