For certain patients in need of a transplant, international organ exchange is life-saving. This is because every so often, no suitable organ is available for transplantation in the area of the organ procurement organisation (OPO) where a patient is on the waiting list. The only chance of survival for patients with end-stage organ failure, for which no alternative treatment to transplantation exists, is being transplanted with an organ offered by a foreign OPO. Yet, the benefits of international collaboration among OPOs are not unique to this patient group, as organ sharing has various, more general advantages. Among these are, firstly, the reduction of the loss of donor organs for which there is no suitable recipient on an OPO’s waiting list; secondly, international organ exchange improves the odds for specific patient groups, such as children, urgent or highly immunised patients, for receiving a matching donor organ; thirdly, international collaboration is valuable for OPOs in smaller counties, because it allows them to expand their otherwise limited donor pool, thereby increasing the likelihood of an optimised donor-recipient match (1-3). However, a major limiting factor in international organ exchange is the acceptable cold ischaemia time (CIT). Organs that tolerate only short CITs, such as the heart and lungs, are therefore less suitable for long distance transports from remote OPOs than organs that allow longer CITs (4,5).

With the aim of supporting the collaboration among national or supranational OPOs, the European Organ Exchange Organisation (EOEO) was established in 2004 (3). The members of the EOEO exchange organs for which there is no suitable recipient on the offering OPO’s waiting list with the other member OPOs. According to the first-come first-served principle, an organ offered by an EOEO member is allocated to the OPO that first accepts the organ for transplantation to a patient on its waiting list (4). Even though international cooperation is widely acknowledged as an important factor in organ transplantation, only limited information about the impact of international organ exchange is available. To the best of our knowledge, only a few studies specifically addressing this issue have been published during the last decade (2,4,6-8). The goal of our study was thus to evaluate the impact of international organ exchange on the Swiss transplant activity, and raising the awareness of the fact that many patients owe their life to international organ exchange.

This study is a retrospective analysis of data related to international organ exchange and its impact on the Swiss transplant activity. The study period was 1 January 2009 to 31 December 2013; excluded from the analysis was living donation data. The Swiss Organ Allocation System (SOAS) data base was queried for information about the organs offered by foreign OPOs affiliated with the EOEO. In a first step, the offers were categorised by organ type and according to the origin OPO of the organs. Then, the subset of accepted offers (i.e., organs originating from foreign OPOs allocated to patients on the Swiss waiting list) was partitioned by calendar year. For each organ type, the acceptance rate of foreign offers (the number of organs allocated expressed as a percentage of the total number of offers) was calculated. In order to evaluate the impact of allocated foreign offers on the Swiss transplant activity, the number of transplants from deceased donors performed during the study period was extracted from SOAS. For the assessment of the impact, the number of foreign offers allocated to patients on the Swiss waiting list was divided by the total number of transplants.

Paediatric heart transplant data was gathered within the framework of a medical doctorate thesis. The supplementary information about the hearts offered by foreign OPOs and the patients on the Swiss waiting list for the period between 1 January 2004 and 31 December 2008 was also extracted from SOAS.

Between 2009 and 2013, a total of 1028 organs from deceased donors were offered by foreign OPOs to Swisstransplant, the Swiss National Foundation for organ donation and transplantation, for allocation to patients needing transplantation in Switzerland (Table 1). Of all organs offered, 35.9% originated from the Agence de la Biomédecine (ABM), 25.6% from the National Health Service Blood and Transplant (NHSBT), 12.9% from Eurotransplant (ET), 10.8% from Scandiatransplant (SCANDIA), 9.0% from the Organització Catalana de Trasplantaments (OCATT), and 5.7% from Italian Gate to Europe (IGE).

When looking at the distribution of offers by organ type, Table 1 shows that the largest number of hearts was offered by NHSBT and ABM (36.6% and 27.9%, respectively). The prevalent origin OPOs of lung offers also were NHSBT and ABM (43.0% and 26.5%). ABM offered more than two thirds of all livers (67.5%) and almost half of the kidneys (46.1%). The majority (55.8%) of organs in the “others” category, which includes pancreas, islets and small bowel, were offered by ET.

Of the 1,028 organs offered, 137 (13.3%) were accepted by the Swiss transplant centres for transplantation.

Figure 1 Impact of imported organs on the transplant activity in Switzerland 2009-2013. 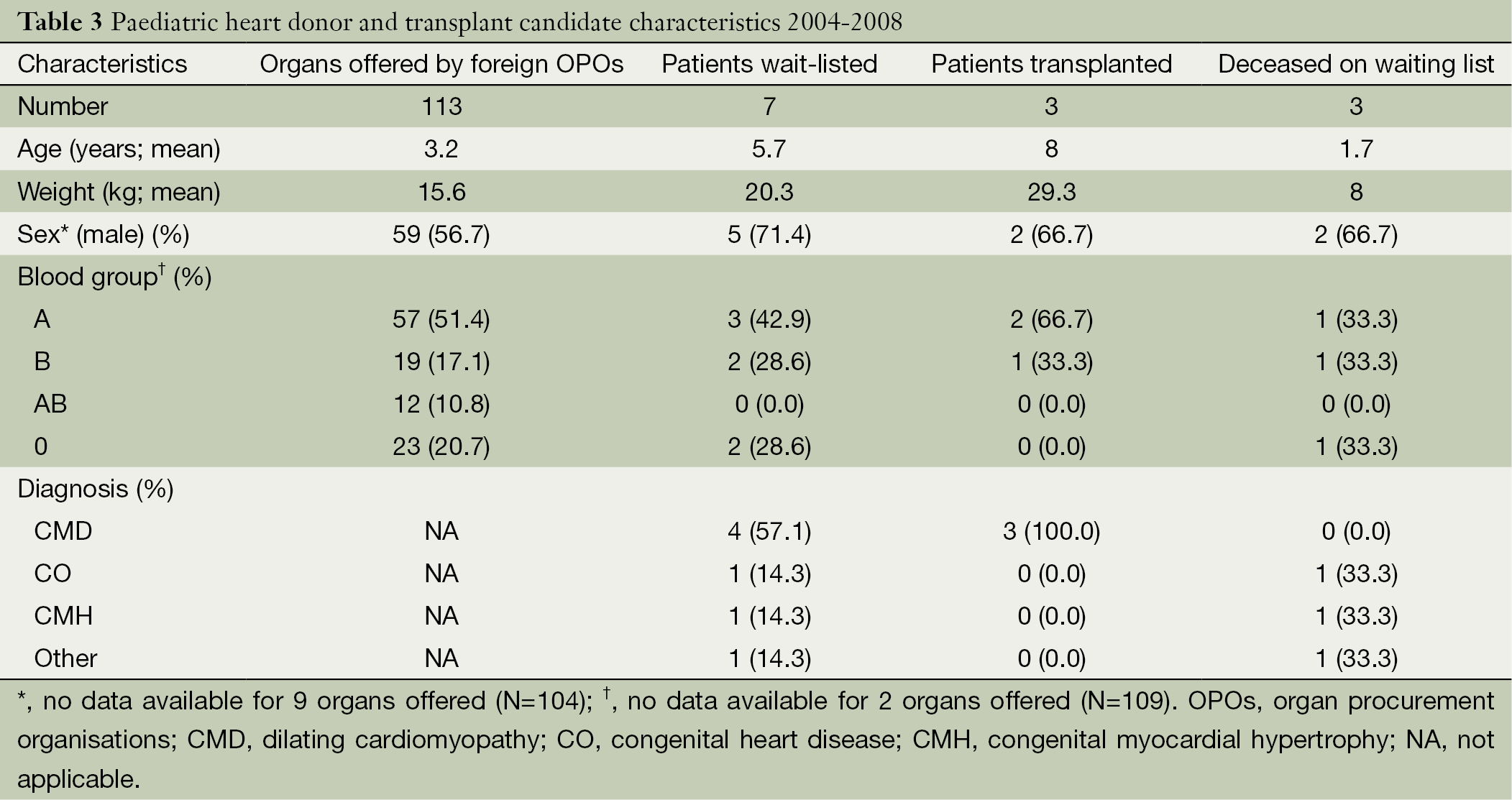 Between 2009 and 2013, 29 patients aged below 16 years were wait-listed for a cardiac transplantation. Of the 16 patients who received a transplant during that period, 6 (37.5%) were transplanted with hearts offered by foreign OPOs. While the number of paediatric heart transplant candidates was more than four times bigger than during the 2004–2008 period, the rate of wait-listed patients who deceased (n=5) decreased to 17.2%.

This study is the first comprehensive evaluation of the impact of international organ exchange on the Swiss transplant activity. Between 2009 and 2013, 1,028 organs were offered by foreign OPOs, whereof 137 (13.3%) were allocated to patients on the Swiss waiting list. The organs offered by foreign OPOs which were allocated in Switzerland made 7.2% of the transplants performed during the 5 years analysed possible.

Our assessment showed that the impact of imported organs varied greatly during the study period and between the organ types (Figure 1). While only 1.5% of the total number of pancreas, islets and small bowel transplantations were performed with organs originating from foreign OPOs, the impact of imported organs was as high as 14.2% on the Swiss liver transplant programme in the years 2009-2013. The 70 imported livers accounted for 51.1% of all foreign offers allocated to patients in Switzerland. With a 42.9% acceptance rate, the liver was also the organ with by far the highest ratio of accepted offers (Table 2). This significant number of imported livers is owed to a close collaboration between Swisstransplant and the Agence de la Biomédecine which is life-saving for patients on the Swiss liver waiting list. The second largest quantity of imported organs were kidneys (n=35, 25.5% of foreign offers allocated). Kidneys were on second position as well with respect to the acceptance rate (22.7%). Due to the fact that in Switzerland, the kidney is by far the organ most frequently transplanted, the impact of kidneys offered by foreign OPOs was relatively small (4.0%).

In view of the fact that at present, transplantation is the only treatment with a large survival benefit for patients with terminal heart or lung failure, the impact of foreign offers on the heart and lung transplant programmes (8.9% and 6.3%, respectively) is considerable. Of the 298 hearts and the 309 lungs offered by foreign OPOs, 15 hearts and lungs each were allocated to patients on the Swiss waiting list, equalling an acceptance rate of 5.0% for hearts and 4.9% for lungs. In comparison with a previous evaluation this result shows a clear increase, since the acceptance rates in the years 2004-2008 were 2.8% for heart and 2.5% for lung (4). With regard to the impact on the heart and lung transplant activity, we also observed an increase, as it was 8.9% for heart and 6.3% for lung in the present study, while it was 5.8% for heart and 2.8% for lung between 2004 and 2008 (4). Due to the lack of published studies with recent data about the impact of international organ exchange on the transplant activities of other OPOs, we were unable to compare our Swiss results with current international data.

The data presented in our study shows that the impact of international organ exchange on the transplant activity in a small OPO can be considerable. Mainly because the collaboration between the members of the EOEO is a valuable means to enlarge the donor and recipient pools, which helps to reduce the waiting list mortality and prevents the loss of organs for which there is no matching recipient in the area of an OPO. This is most evident in the case of low volume procedures such as paediatric heart transplantation, where our analysis showed that between 2009 and 2013, the mortality was significantly decreased compared with the years 2004-2008, while the impact of organs offered by foreign OPOs on the Swiss paediatric heart transplant programme more than doubled. Therefore, it may be presumed that strengthening the international collaboration can have several positive effects. Above all this means that for the patients, transplantation becomes a viable therapy due to an increased availability of donor organs. This, in turn, helps to increase the awareness of organ donation among the intensive care staff as well as their commitment to the detection of potential donors suitable for transplant candidates with rare patient characteristics. As a result, this may not only allow to expand the indications for transplantation, but also lead to more donor organs that can be exchanged internationally and allocated to candidates belonging to special patient groups. In this context it is noteworthy that international organ exchange thus can be considered a formula for success not only for small OPOs with a limited donor pool. As these OPOs supposedly also have fewer potential recipients on their waiting lists, the odds are increased that no suitable transplant candidate can be found. Therefore, smaller OPOs not only benefit from imported organs, but they may also be exporting a substantial number of organs for which there is no compatible recipient.

Although international collaboration has a direct positive impact on the chances of patients to get a timely, often life-saving transplantation, there are some issues—mainly on an organisational level—that ought to be addressed in order to improve the sharing of organs between OPOs. Apart from complications that may result from the different languages spoken in the various OPOs, non-standardised protocols and the unresolved question of reimbursement in many OPOs are both hurdles to overcome. With regard to protocols this means for example that international organ exchange would be greatly facilitated if there was an international agreement on the examinations that are standardly required for each organ. Another protocol-related issue is owed to the fact that in transplantation, time is of the essence because of ischaemia. This means that the longer it takes for an OPO to decide whether an organ is going to be allocated to a candidate on their waiting list, or whether it will be offered to other OPOs, the shorter the remaining timeframe will be for the other OPOs to allocate the organ and coordinate its transport. Possibly, advances in machine perfusion technique will allow extended ischaemic times in the not-so-distant future, thereby also permitting farther transport distances (9-11). Offering an organ to other OPOs for allocation in any case entails a prolonged period of donor management in the procurement hospital, which, in turn, causes higher costs.

In conclusion, our study showed that international organ exchange substantially contributed to the Swiss transplant activity in the years 2009 to 2013. Organs offered by foreign OPOs accounted for 7.2% of the comprehensive number of transplants from deceased donors performed in Switzerland during that period. The collaboration between the EOEO members can be life-saving, especially for paediatric patients and selected adult transplant candidates. Swisstransplant, being an OPO in a relatively small country, therefore appreciates the international cooperation which, as in the case of the Agence de la Biomédecine, has a beneficial effect for the patients that cannot be underestimated. Consequently, it may be assumed that more patients in Europe could benefit from organ sharing if the standards for international collaboration would be further harmonised.

The authors would like to thank Danick Gut for proofreading the manuscript.