Non-small cell lung cancer (NSCLC) is one of the most common cancers and the primary cause of cancer-related death around the world (1). At present, supplementary therapy used to treat NSCLC patients following surgical operation, and cisplatin is widely considered as a first-line chemotherapeutic agent for NSCLC patients (2). However, cisplatin resistance remains a main obstacle to achieving successful chemotherapy (3). The cytotoxic mechanism of cisplatin includes DNA damage and the suppression of DNA synthesis in cancer cells, which prevent or increase cancer cell death by regulating a range of signaling pathways including autophagy and endoplasmic reticulum (ER) stress (4,5).

The ER is an important organelle for protein folding and maturation in eukaryotic cells. ER stress can be triggered by exposure to chemotherapeutic agents and the accumulation of misfolded proteins (6,7). The accumulation of misfolded proteins in the ER cavity contributes to ER stress and the activation of subsequent unfolded protein response (UPR), thereby initiating the expression of chaperone proteins (8). Moderate ER stress promotes survival of cancer cells and enhances resistance to chemotherapy (9,10).

Autophagy is a common cellular process that degrades aggregated or misfolded proteins in cells and damaged organelles to maintain cell homeostasis (11). It is also a form of programmed cell death, which is closely related to apoptosis (12). Previous studies have reported that autophagy plays a vital role in the drug resistance of cancer cells. Bao et al. reported that induction of autophagy contributes to cisplatin resistance in human ovarian cancer cells (13), while Su et al. demonstrated that autophagy inhibition enhances cisplatin sensitivity in nasopharyngeal carcinoma cells (14). However, knowledge concerning the precise mechanism of autophagy resistance to cisplatin in NSCLC treatment remains extremely limited.

Astragaloside IV (AS-IV), a major active component of Astragalus membranaceus, has anti-cancer, anti-oxidative, and anti-inflammatory functions (15-17). Although AS-IV is a potential treatment drug for NSCLC (17), the relevant mechanism has not been elucidated. Thence, this study aimed to investigate the effect of AS-IV on cisplatin chemosensitivity in NSCLC cells, and the relationship with endoplasmic reticulum stress and autophagy. In the current study, the results of western blot suggested that cisplatin seriously induced increasing of ER stress-related proteins glucose regulated protein 78 (GRP78) and protein kinase R (PKR)-like endoplasmic reticulum kinase (PERK), also enhanced expression levels of autophagy-related proteins Beclin1 and LC3 II/I. Fortunately, treatment combined with AS-IV partly reversed these effects. Thus, we inferred that AS-IV increased the chemosensitivity of NSCLC cells to cisplatin through suppressing ER stress and autophagy.

NSCLC cell lines (A549, H1299) were purchased from the American Type Culture Collection (ATCC). Cisplatin-resistant A549 and H1299 cell lines, A549Cis and H1299Cis, were established by constant exposure to cisplatin through a process described previously (18). A549Cis and H1299Cis cells were cultured in RPMI-1640 medium (Gibco, Rockville, MD, USA) supplemented with 2 µM cisplatin and 10% fetal bovine serum (FBS) at 37 °C with 5% CO2. A549Cis and H1299Cis cells were moved to the cisplatin-free medium for 2 weeks before subsequent experiments were performed in order to eliminate the interference of residual cisplatin. AS-IV, cisplatin, and rapamycin were obtained from Sigma (St. Louis, MO, USA).

Cell Counting Kit-8 (CCK-8) assay was carried out to detect cell viability. Different groups of cells were seeded into 96-well plates at a density of 2×103 cells per well, in triplicate. After cells were treated with each concentration of cisplatin for 24 h, 10 µL/well of CCK-8 solution (Dojindo, Tokyo, Japan) was added, and the cells were incubated in the dark at 37 °C for another 2 h. The optical density (OD) was determined under 490 nm.

Cell apoptosis was detected by Hoechst 33258 stain analysis. In brief, 2×105 cells per well were washed with phosphate-buffered saline (PBS) twice. Then, 1 mL of Hoechst 33258 reagent (Beyotime, Nantong, China) was added to each well, and the cells were incubated at 37 °C for 30 min in the dark. Next, the Hoechst 33258 reagent was removed, and cells were washed with PBS 3 times (5 min × 3 times). Morphological changes of apoptotic cells were observed under an inverted fluorescence microscope, and images were captured.

Cells were harvested to detecte cell apoptosis after 48 h transfection. Cells were washed with pre-cooled PBS three times, followed by being re-suspended using binding buffer to a concentration of 1×106/mL to 5×106/mL. Then, 100 µL cell suspension was moved into a 5-mL tube, to which 5 µL of Annexin V/fluorescein isothiocyanate (FITC) and 5 µL of propidium iodide (PI) were added, followed by incubating the tube under the dark for 15 min. Then, 400 µL of 1× Annexin V binding buffer was added into the tube. Cell apoptosis was analyzed using a FACScan flow cytometer (BD Biosciences, USA).

All data are presented as the mean ± standard deviation (SD) and were analyzed by SPSS19.0. The Student’s t-test was used to compare means of two groups and one-way analysis of variance (ANOVA) was used for comparing means of multiple samples. Values of P<0.05 were considered statistically significant. 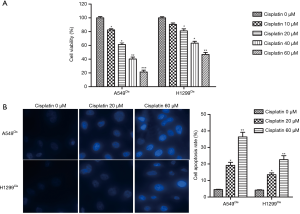 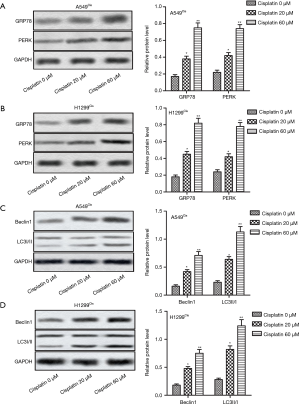 The effect of AS-IV on the chemoresistance of NSCLC cells to cisplatin was explored. The results suggested that the combination of AS-IV and cisplatin suppressed cell viability and increased the cell apoptosis rate in A549Cis and H1299Cis cells in a dose-dependent manner compared with the cisplatin 20 µM treatment group (Figure 3A,B,C,D). These findings demonstrate that AS-IV enhanced the anti-tumor effect of cisplatin in NSCLC cells in a dose-dependent manner. 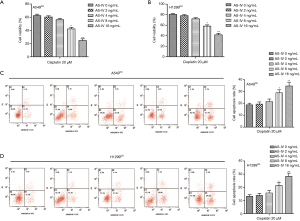 We further examined the molecular changes of NSCLC cells under AS-IV cotreatment to reveal the underlying mechanism of AS-IV sensitization in the chemosensitivity to cisplatin. Western blot results revealed that the expressions of GRP78 and Beclin1 were both markedly downregulated after co-administration with AS-IV (Figure 4A), indicating that AS-IV might augment the antitumor effect of cisplatin through inhibiting ER stress and autophagy. To verify our hypothesis, autophagy activator, rapamycin (100 nM), and ER stress inducer, tuniamycin (5 µg/mL), were used to treat the cells. Our data showed that both rapamycin and tuniamycin treatment increased cell viability and decreased cell apoptosis in A549Cis and H1299Cis cells, as compared with the AS-IV 16 ng/mL group. This suggests that induction of autophagy or ER stress counteracted the inhibitory effect of AS-IV on chemoresistance to cisplatin in NSCLC cells (Figure 4B,C,D,E). Our data demonstrate that AS-IV sensitized NSCLC cells to cisplatin through suppressing ER stress and autophagy. 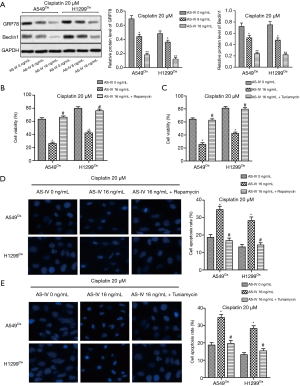 NSCLC is one of the most common malignant tumors, with cisplatin being the predominant first-line chemotherapy for NSCLC patients. However, acquired drug resistance limits the application of cisplatin (19). As a chemotherapeutic agent, cisplatin causes DNA lesioning and the suppression of DNA synthesis in cancer cells. Cisplatin-caused DNA damage can activate various signaling pathways which induce cell death, mainly through apoptosis-related pathways (20). Recent research indicates that cisplatin-induced ER stress and autophagy can inhibit cisplatin-induced apoptosis in cancer cells (5). Therefore, suppressing ER stress and autophagy induced by cisplatin might help to augment the anti-tumor effect of cisplatin. In our present study, we found that AS-IV, a major active component of Astragalus membranaceus, can sensitize NSCLC cells to cisplatin by suppressing ER stress and autophagy.

ER is an essential intracellular organelle in eukaryotic cells with multiple functions including protein synthesis, protein folding, stress reaction, and calcium ion level modulation (21). It was reported that changes in the tumor cell microenvironment or the effects of anti-tumor drugs can provoke ER stress, resulting in the accumulation of unfolded proteins in the ER lumen (22,23). ER stress can trigger a UPR, which decreases the burden of protein processing in the ER and increases the level of ER molecular chaperones such as GRP78 and the ER stress sensor protein, PERK (4). It has been shown that mild ER stress promotes cell survival through UPR to mitigate ER stress (24). However, severe ER stress can cause cell apoptosis by activating the downstream apoptotic signaling pathway (25). Lin et al.’s study reported that human lung cancer cells acquired cisplatin-resistance through ER stress (26). Zhang et al. also indicated that cisplatin induced ER stress in U251 human glioma cells (4). Similarly, our present study suggests that cisplatin suppressed cell viability and triggered apoptosis in cisplatin-resistant NSCLC cells; the application of cisplatin upregulated the expression of GRP78 and PERK, meaning that cisplatin induced ER stress in NSCLC cells dose-dependently.

Autophagy is a common process in cellular health. Autophagy maintains cell homeostasis by degrading the intracellular aggregation of misfolded proteins and damaged organelles (11). The key event of autophagy is autophagosome formation, and Beclin1 is integral in this process. LC3-II is involved in autophagosomal membrane formation associated with the completion of various cell processes. The ratio of LC3-II to LC3-II I is used to evaluate autophagy levels (27). Abundant research suggests that autophagy plays an important role in regulating chemoresistance in multiple types of cancer cells. A study by Fukuda et al. reported that autophagy was related to endometrial tumor growth and cisplatin resistance, and that the inhibition of autophagy overcame the cisplatin resistance of endometrial cancer cells (28). Furthermore, the inhibition of autophagy was reported to enhance cisplatin-induced cell death and apoptosis in human ovarian cancer cells (13). The present study found that cisplatin increased the expression of Beclin1 and promoted transformation of LC3-I to LC3-II, suggesting that cisplatin advances autophagy in NSCLC cells.

Recently, traditional Chinese medicine has gained significant attention because of its potential antitumor activities. AS-IV is a major active ingredient of Astragalus membranaceus, a medicinal plant commonly used in East Asia (29). Accumulating evidence suggests that AS-IV can exert multiple anti-inflammatory and anti-oxidative functions, and it has been used often for the treatment of cardiovascular diseases (30), exerting its anti-tumor effects to this end. AS-IV was also observed inhibiting colorectal cancer epithelial–mesenchymal transition by promoting miR-134 expression level which dramatically inhibited the recombinant human cAMP responsive element binding protein (CREB1) signaling pathway, and therefore enhanced the sensitivity to chemotherapy (31). Additionally, it was also shown that AS-IV also sensitizes NSCLC cells to gefitinib via the regulation of Sirtuin 6 (SIRT6) (32). In the current study, our results demonstrated that cisplatin treatment combined with AS-IV dramatically enhanced cisplatin sensitivity in NSCLC cells and enhanced the anti-tumor effect of cisplatin. Moreover, we also found that AS-IV inhibited the expression of GRP78 and Beclin1, indicating that AS-IV suppresses ER stress and autophagy in NSCLC cells dose-dependently. Inhibition of ER stress or autophagy both counteracted the inhibitory effect of AS-IV on chemoresistance to cisplatin in NSCLC cells. Our results confirm that AS-IV can sensitize NSCLC cells to cisplatin through suppressing ER stress and autophagy.

In summary, this study found that cisplatin triggers autophagy and ER stress which, in turn, increases chemoresistance in NSCLC cells. However, the combination of AS-IV and cisplatin can sensitize NSCLC cells to cisplatin and enhance the antitumor effect of cisplatin by suppressing ER stress and autophagy. These findings provide support for the potential clinical application of AS-IV on cisplatin-resistant NSCLC patients.

Conflicts of Interest: All authors have completed the ICMJE uniform disclosure form (available at http://dx.doi.org/10.21037/jtd-20-2098). The authors have no conflicts of interest to declare.