Stroke is one of the leading causes of mortality and disability worldwide (1,2). In China, stroke has surpassed coronary heart disease and become the leading cause of death among adults, with 1,500,000 deaths in 2011 (3). Its mortality in China is 4-5 times higher than that in the United States and European countries, 3.5 times higher than that in Japan, and also higher than those in Thailand, India and other developing countries (4). High blood pressure is the most important risk factor for stroke, which accounts for 40-50% of stroke in Chinese population (5). Effective treatment of hypertension can achieve blood pressure control (6). Many large-scale multi-center randomized controlled studies and meta-analysis have demonstrated that lowering blood pressure in hypertensive patients is fundamental for the prevention of stroke and other cardiovascular events (7-11).

Hypertension is a complex chronic disease, with an etiology involving multiple physiologic mechanisms, including the renin-angiotensin-aldosterone system, sympathetic tone, and body fluid volume regulatory system (12). Individual antihypertensive drugs target single mechanism and have limited efficacy in advanced hypertension (13,14). Therefore most current clinical hypertension guidelines recommend combination of at least two anti-hypertensive drugs for the initial treatment of grade ≥2 hypertension or complicated hypertension (5,15,16). During the initial phase of hypertension treatment, combination therapy has been shown to increase the rate of blood pressure control, but also shorten the time to achieve control (17,18). Randomized controlled clinical studies demonstrate a reduced incidence of cardiovascular events including stroke, even for patients with grade 1 hypertension, if target blood pressure was achieved within 3 to 12 months during initial treatment (19,20).

All the data were obtained from the follow-up database of the population-based “Shanghai Electronic Health Record Management System of Community Residents (SEHRMSCR)”. As previously described (22), SEHRMSCR is an electronic health record-based local health information platform in Shanghai, China, which is established in 2005, it covers 93.05% (n=830,400) of the local permanent residents and 30.5% (n=334,800) of the floating populations in the Minhang District, Shanghai. Results from medical records, physical examination, chronic disease management, two-way consultation, and medication management are collected and transmitted through the network and stored at a central location. Standard Operating Procedure (SOP) has been developed for information gathering, recording and transmission, and local medical staff has undergone training for standardized information collection and management. Compliance with SOP is verified by independent audits on a regular basis. This registration system was sponsored and supervised by Shanghai Health Bureau and the data collection and information store complied with international standards, including data confidentiality and safety. This study was approved by the Ethics Committee of Fudan University.

From the database, follow-up data of hypertensive patients from January 1 2005 to July 31 2011 were selected. Inclusion criteria were: (I) systolic blood pressure (SBP) ≥140 mmHg and/or diastolic blood pressure (DBP) ≥90 mmHg (measured on three different days, with an interval of at least 14 days); (II) at least 18 years of age; (III) no history of stroke; (IV) drug-naive for ≥6 months before enrollment; (V) initiation of single- or dual-antihypertensive therapy. Exclusion criteria included: (I) secondary hypertension; (II) history of malignancy; (III) steroid treatment; (IV) patients with unclear history of stroke at baseline or during follow-up (V) subjects taking ≥3 classes of antihypertensive drugs and/or using antihypertensive drugs that contain traditional Chinese drugs/components.

Based on the registration data in the SEHRMSCR, the diagnosis of ‘stroke’ included ischemic (ICD-10 code I63-I67) and hemorrhagic stroke (ICD-10 code I61), and transient ischemic attack (TIA) (ICD-10 code G45). New-onset stroke was defined as patients who had no history of stroke at baseline, but were diagnosed with stroke during the follow-up period.

The switch rate was defined as the ratio between the number of patients whose initial treatment was switched and that of cumulated patients who received antihypertensive therapy in that month.

Based on their initial therapy, subjects were divided into the dual-therapy group and mono-therapy group. Baseline characteristics, initial medications, decrease in blood pressure, target blood pressure control rate, drug switching patterns, and incidence density (cases per 100 person-years) of stroke during the follow-up period were described. The inter-group differences of continuous variables were compared using t-test, and those of categorical variables with chi-square test/Fisher’s exact test. The Kaplan-Meier method (Log-rank test) was used for the comparison of stroke risks in both groups. In the Cox proportional hazards model, the baseline factors including socio-demographic characteristics, baseline blood pressure, history of cardiovascular disease, cardiovascular disease risk factors, and target organ damage were included. The unadjusted and adjusted hazard ratio (HR) and 95% confidence interval (95% CI) of the stroke between these two groups were calculated. All the statistical analyses were carried out using the SAS 9.3 software and Stata 11.0.

A total of 37,608 subjects met the inclusion criteria and were enrolled in this cohort (Figure 1). The initial mono- and dual-therapy group included 32,682 (86.9%) and 4,926 (13.1%) subjects, respectively. Table 1 shows the baseline data of the two groups. Overall, compared with those in the mono-therapy group, patients in the combination group were significantly younger, had a higher percentage of male subjects, a higher body mass index (BMI), and higher baseline blood pressure (DBP and SBP). In addition, the incidence of angina, smoking, total cholesterol, left ventricular hypertrophy, proteinuria, increased plasma creatinine of combination group were also significantly higher than mono group (P≤0.0486). 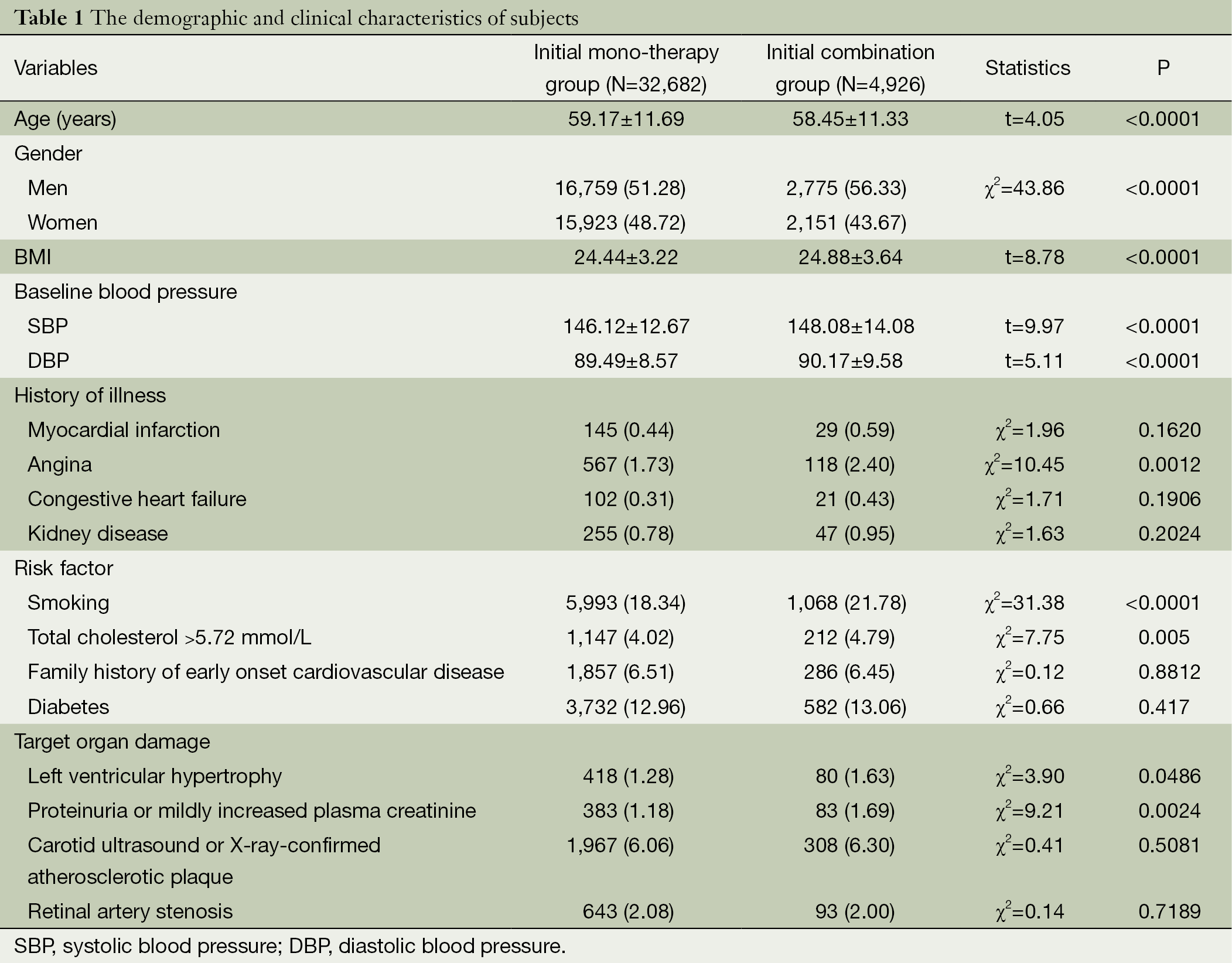 Table 1 The demographic and clinical characteristics of subjects
Full table 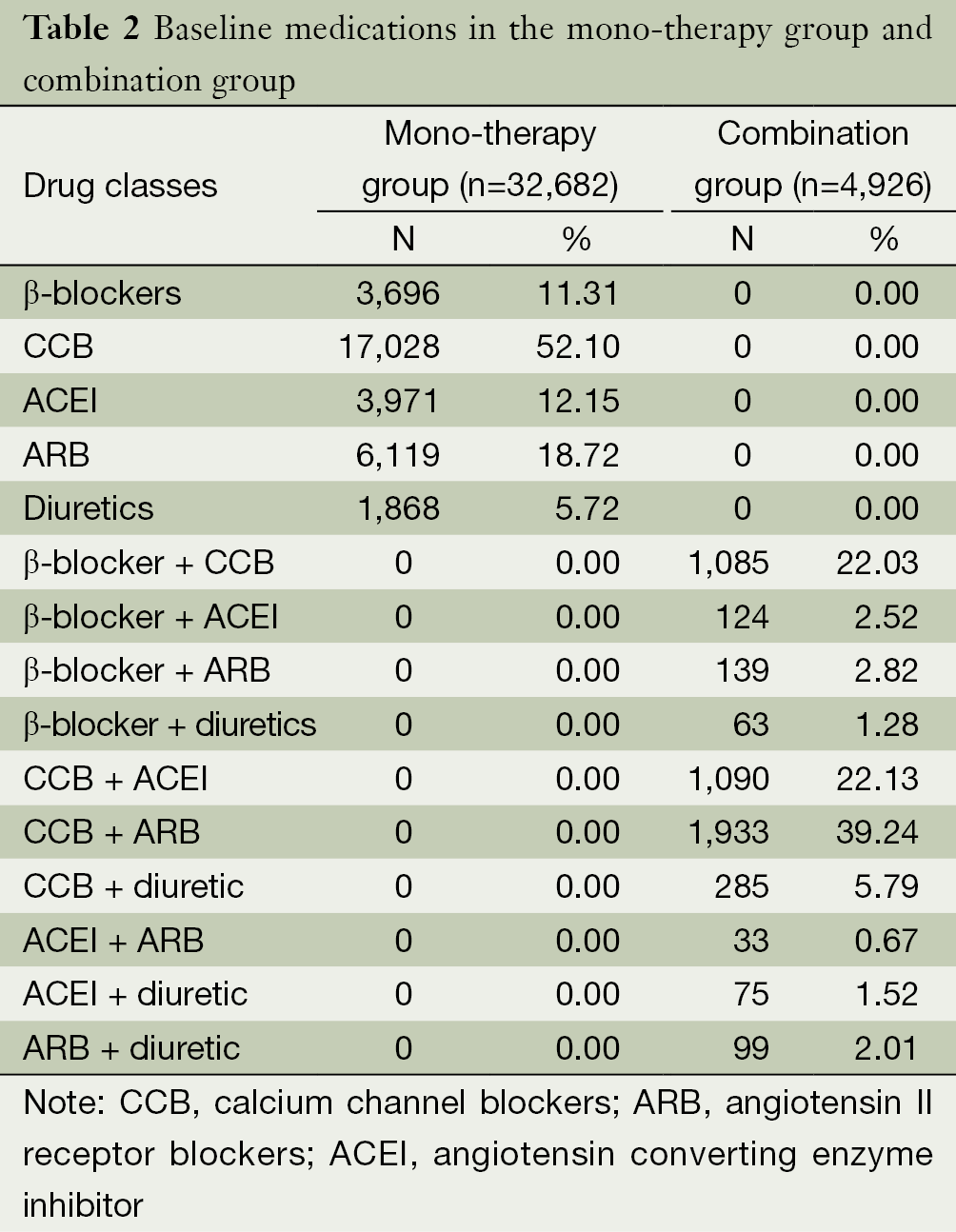 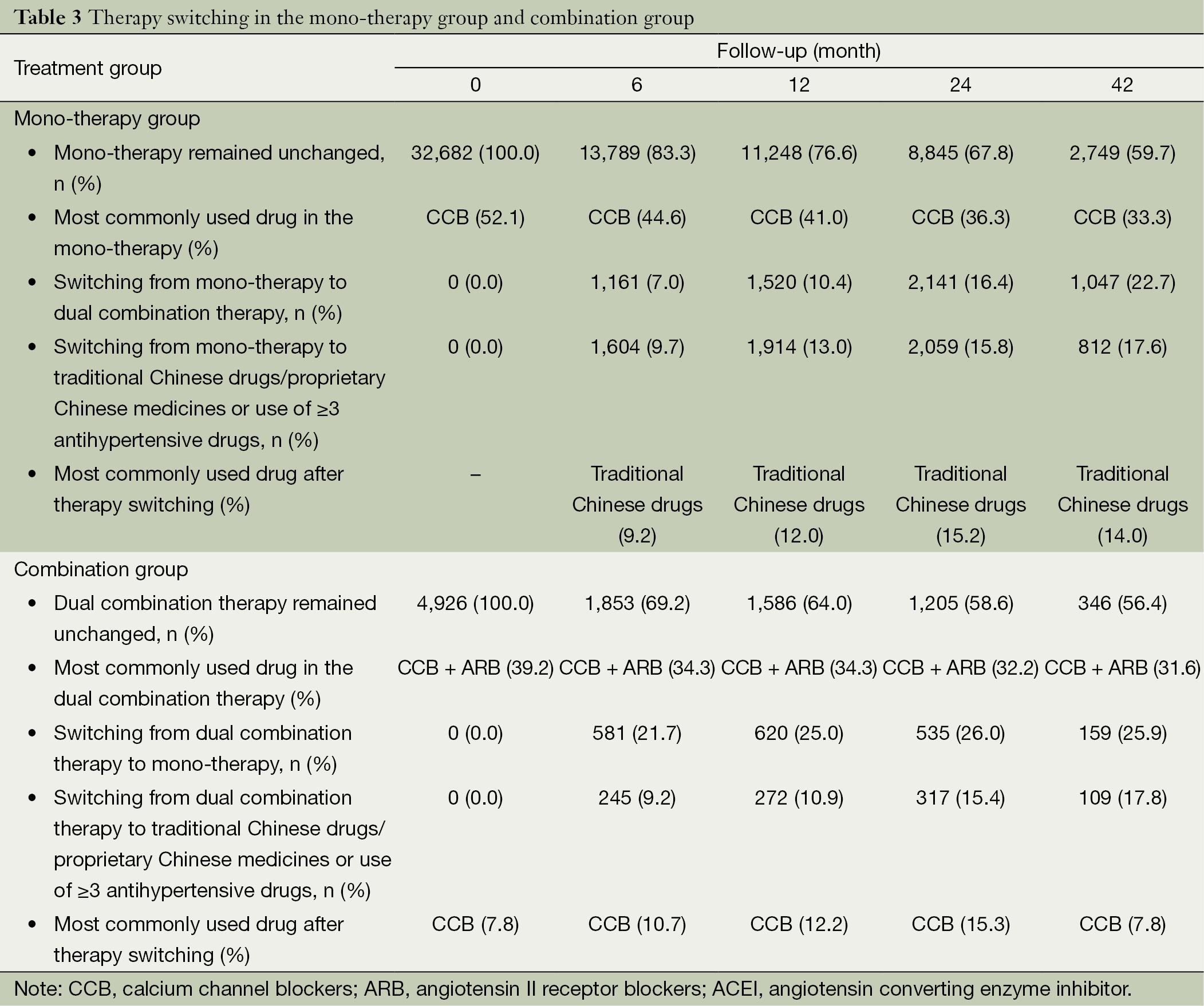 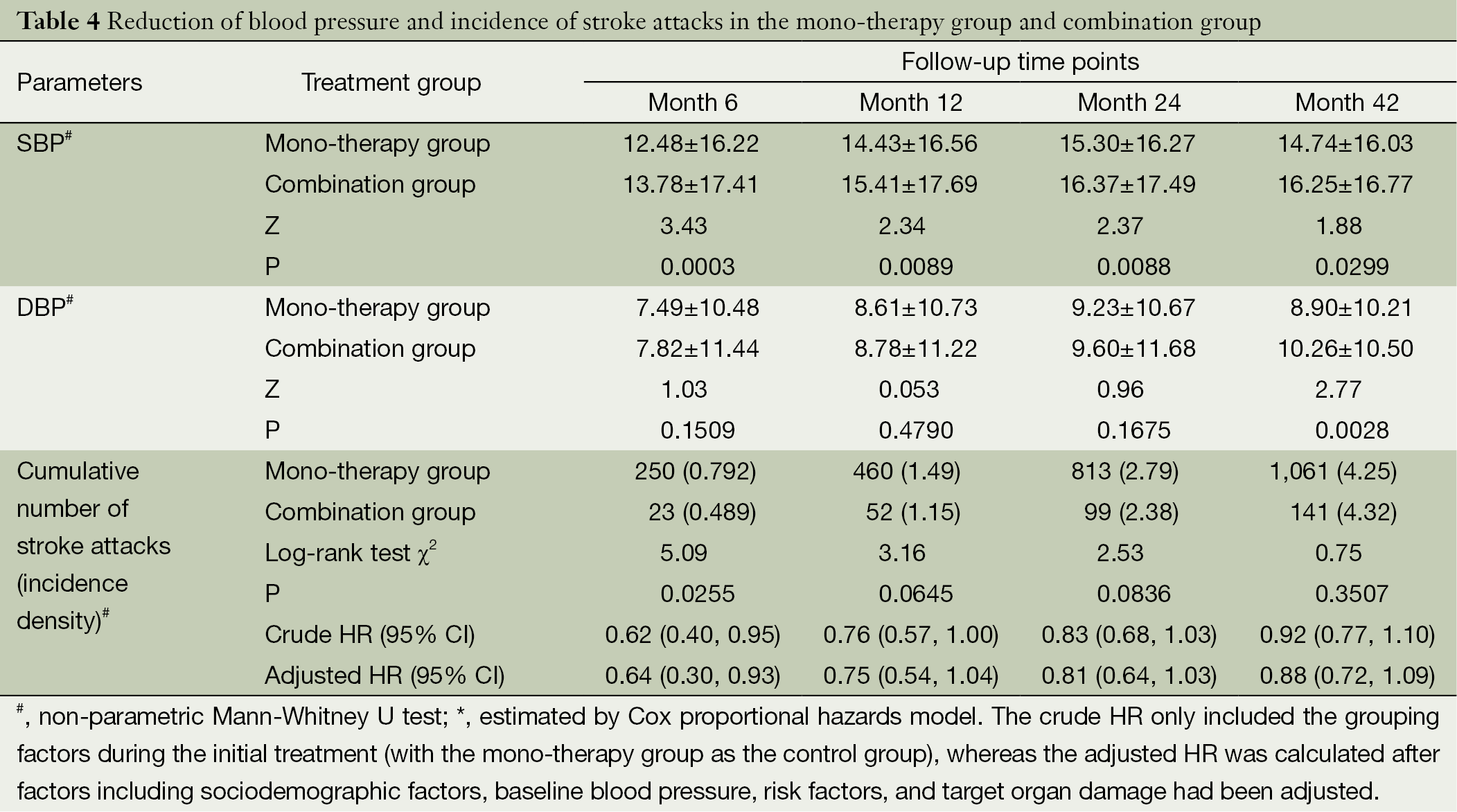 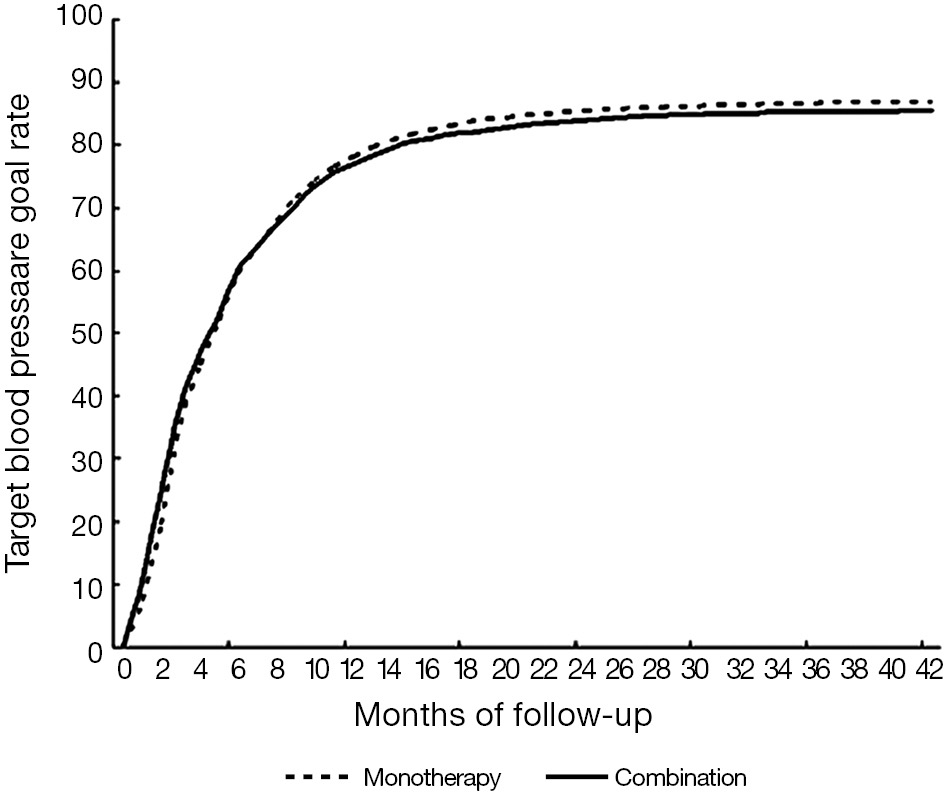 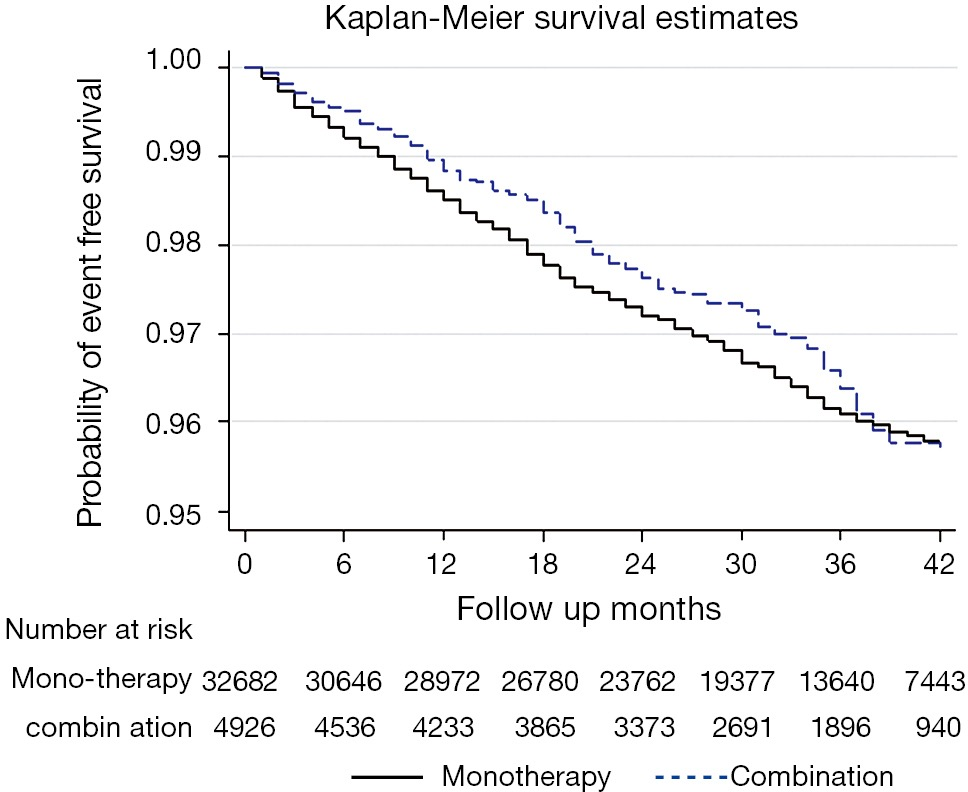 Figure 3 The survival curves of initial mono- and combination-therapy groups: the incidence of stroke.

This study explored the preventive effect of combination anti-hypertensive therapy on stroke based a very large sample of hypertensive patients in “real world” practice. Despite this is an observational study, which is different from a strictly-designed clinical trial, we still have several interesting findings. Overall, our data demonstrates that, for patients with uncontrolled hypertension in real “world” clinical practice, initial dual therapy is more effective for the prevention of stroke during the first 6 months of treatment, but not thereafter. The data provides important insights and has important implications for the early dual treatment of Chinese hypertensive subjects.

In this study, only 13% of subjects in our cohort were started on dual therapy, which was significantly lower than the reported figure of 26% among hypertensive outpatients in the clinical practice of United States (23). Also, the rates of medication switching were high in both the mono- and dual-therapy groups. The target blood pressure control rate and the time to reach the target blood pressure differed from those reported in randomized controlled trials (RCTs) (17,18,24,25). The speed to achieve the target blood pressure was low in both groups; this phenomenon might be due to the inadequate capacity of hypertension treatment of Chinese internal physicians, low adherence of drug treatment of Chinese hypertensive patients and intolerable side effects of anti-hypertensive drugs. Further more, the differences between our findings and those from RCTs likely reflect differences in the health care setting and the complexity of blood pressure control in clinical practice, that is, our study is based on data from real-world health records, the treatment assignment and compliance are therefore not controlled and standardized as would be the case in a prospective trial, but the data accurately reflect “real-world” treatment conditions.

A main finding is the early benefit of dual therapy, with reduced incidence of stroke during the first 6 months, but no significant difference during subsequent 6-24 months. This finding supports prior data that early control of hypertension can remarkably reduce the risk of cardiovascular events (19,20,26). This could be ascribed to the rapid effect of initial blood pressure control, less side-effect, better blood pressure control, and low rate of medication in dual therapy group. However, the risk of stroke did not parallel the blood pressure level: the target blood pressure control rate and stroke incidence differed significantly only during the first 6 months, while the significant differences in incidence of stroke disappeared at 12, 24, and 42 months, even after the confounding factors were adjusted. There might be many factors influence the stroke prevention effects due to the observational nature of real-world study. In this context, the choice of medications is critical. It is known to all, CCBs have been widely used in clinical practice due to their good antihypertensive effect, few contraindications, and potential for combination with other anti-hypertensives. In our cohort, the initial therapy and maintenance therapy in both groups were mainly CCB-based (alone or in combination), and CCB+ARB was the dominant therapy after medication switching in the combination group. As demonstrated by the majority of studies (9,27-31), both CCBs and ARBs, alone or in combination, can effectively prevent new-onset stroke. Thus this medication use pattern might confound preventive effect of new-onset stroke. This pattern seemed consistent with the Chinese guidelines for the management of hypertension (4), in which recommend that CCB-based antihypertensive therapy as the first-line treatment for high blood pressure in China. Furthermore, the lack of concordance between risk of stroke and blood pressure control might be related to confounding effects due to drug switching specifically to the decreased proportion of the combination of CCB + ARB, which may have resulted to a decreased synergistic effect on stroke prevention. Therefore, even in patients whose blood pressure has been controlled by CCB + ARB, reduction of ARB (e.g., due to economic concerns) and switching to CCB alone is not recommended because such a switching strategy may potentially weaken the protective effect of ARBs against stroke (32). Boutitie et al. reavealed that ARBs could not only lower blood pressure via angiotensin receptor AT1 but also provide stroke prevention by improving cerebral collateral circulation (via AT2) and enhancing hypoxic tolerance of nerve cells (33).

Our study had some limitations: first, as an observational study by nature, the subjects were not randomized, and therefore the baseline characteristics of these two groups were not comparable, and the results might be biased even after statistical adjustment for confounders. Second, blood pressure measurement, antihypertensive therapies, and diagnostic criteria of stroke were not standardized. Third, some influencing factors of the efficacy such as medication adherence and clinical inertia were not collected, and their potential confounding effects could not be analyzed.

Funding: The study was supported by grants from Novartis GCR.

Disclosure: Mr. Yu-Song He is an employee of Novartis. The funding source had no role in the design and conduct of the study, in the collection, analysis, and interpretation of the data, or in the preparation, review, or approval of the manuscript. No other disclosures were reported.