Lung cancer is the leading cause of cancer deaths worldwide, contributing to approximately 1.6 million deaths each year despite advances in diagnosis and treatment; its incidence rate is steadily increasing in industrialized countries (1). In a recent survey during the year 2011 in Korea, the age-standardized incidence rates for lung cancer per 100,000 people were 46.0% and 15.1% for men and women, respectively. The most common site of cancer death in both sexes was also lung [for men, crude rate (CR), 45.9%; age-standardized rate (ASR), 35.0%; for women, CR, 17.4%; ASR, 9.1%], and the 5-year lung cancer survival rate from 2007 to 2011 was 18.3%, and 26.8%, for men and women, respectively (2).

Approximately 80% of lung cancers are classified histologically as non-small cell lung cancers (NSCLC), of which adenocarcinoma is the most common type (3). Recently, strategies for lung cancer treatment have focused on inhibiting targeted molecules or oncogenic pathways. Such examples are receptor tyrosine kinases, which have already provided us with new and preferred therapeutic options (4,5). Innovative approaches are being used to develop biomarkers of lung cancer risk and prognosis. Validation studies, however, should be underway for future introduction in clinical practice. Several clinical and pathologic variables are useful for assessing the prognosis of lung cancer patients.

Mutations of p53 gene are usually described as abnormal DNA sequences in p53, and are the most common molecular alteration in human cancer (6). Ki-67 antigen is one of several cell-cycle regulating proteins and is associated with ribosomal RNA transcription (7). Immunohistochemical (IHC) expression of p53 and Ki-67 is usually interpreted as likely indicating a p53 gene mutation and a nuclear marker for cell proliferation (8,9). Accordingly, their detection in the tumor tissue has taken on considerable importance in prognosis and treatment in lung cancer. While nucleotide sequencing is the most reliable technique to detect gene mutation, it is time consuming, laborious, complicated, and costly. Conversely, an IHC analysis can rapidly detect the altered protein produced by the mutant gene, although it is neither 100% specific nor 100% sensitive (10).

We conducted a retrospective analysis to determine the prognostic significance of IHC expression of p53 and Ki-67 in tumor samples from patients with surgically resected lung adenocarcinoma at Hallym University Medical Center in Korea.

All patients were initially diagnosed with NSCLC at the Hallym University-affiliated hospitals, including the Dongtan, Hangang, Chuncheon, Kangnam, Kangdong, and Hallym University Sacred Heart Hospital, between 2002 and 2013. A total of 323 patients received surgical treatment. Of these, primary lung adenocarcinomas were identified in 136 patients. All smokers had a ≥10 pack-year history of smoking. Patient follow-up information was obtained through review of hospital records or direct patient contact.

All specimens were obtained from resected tumors. The hematoxylin and eosin (H&E) slides from each patient were reviewed and histologically classified according to the revised TNM classification of lung cancer (11). Clinical and pathologic information was also obtained, including the type of operation, age, sex, co-morbidities, smoking history, tumor differentiation, regional lymph node involvement, pathologic stage, absolute lymphocyte count (ALC), follow-up status, tumor recurrence and progression, and survival. Lymphopenia was defined as an ALC of <1,000/μL at the diagnosis of lung cancer. Two patients were lost to follow-up before completion of the study (Figure 1). 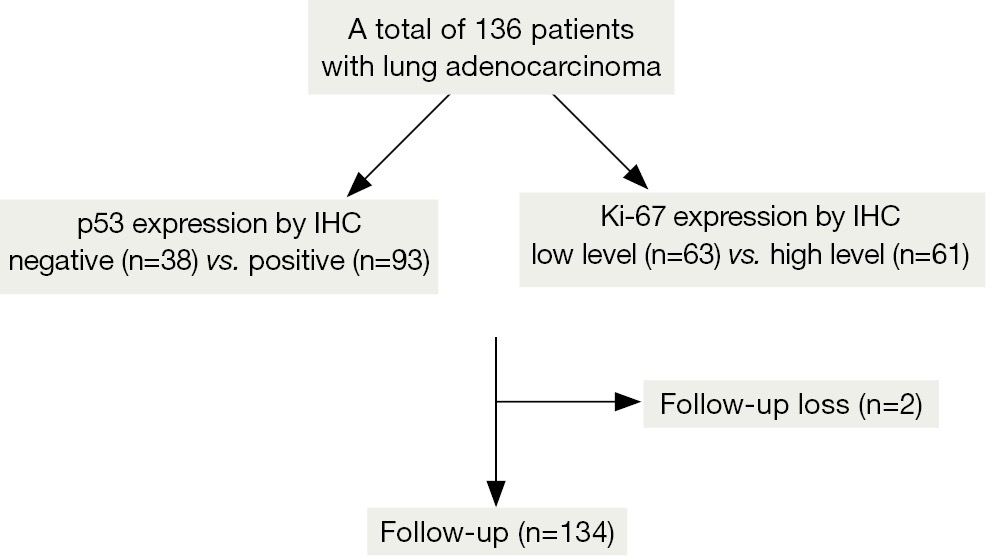 Figure 1 Flow chart for classification of the patients with surgically resected lung adenocarcinomas. Immunohistochemical staining of p53 and Ki-67 was available for 131 patients and 124 patients, respectively. IHC, immunohistochemistry. 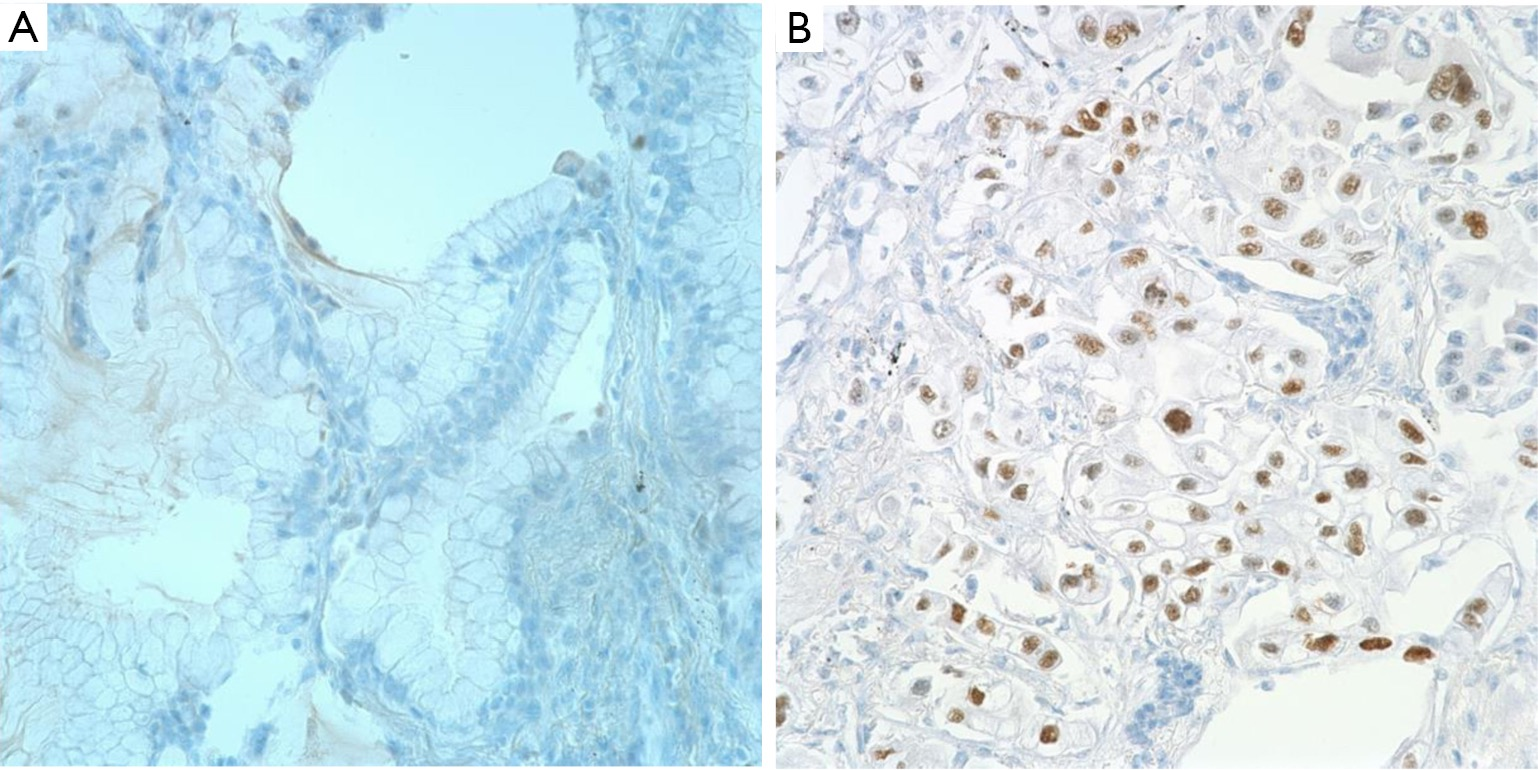 Figure 2 Immunohistochemical staining for p53 expression in lung adenocarcinoma (×400). (A) Negative; (B) positive. 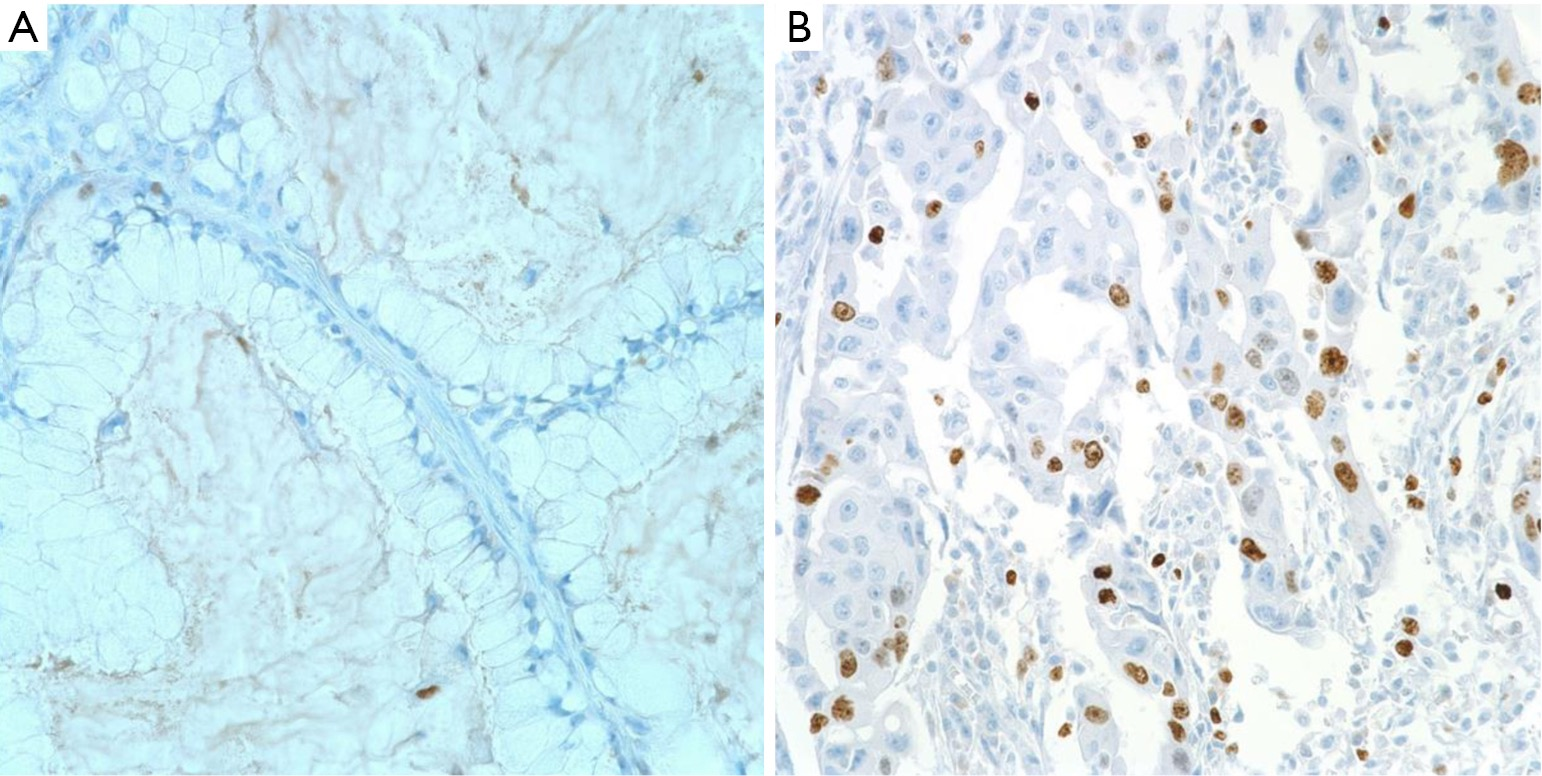 Associations between p53 and Ki-67 and clinical and pathologic variables were analyzed by using the χ2 test. A logistic regression model was used to assess multiple associations. Survival time was determined as the time from tumor resection to death from any cause, and censored at the last observation date that each patient was known to be alive. The associations between individual clinical and pathologic variables, such as age, sex, peripheral ALC, pathologic stage, tumor differentiation, T stage, N stage, p53, Ki-67, and survival, were assessed by using the Cox proportional hazards regression model. Survival probabilities and poor outcome (tumor recurrence, progression, or death) were estimated by using the Kaplan-Meier method and compared with the log-rank test. An independent analysis was also performed for stages I, II and >III. A P value of <0.05 was considered significantly. Statistical analyses were performed using the dBSTAT software version 4.0 (dBSTAT Inc., Chuncheon, Korea). 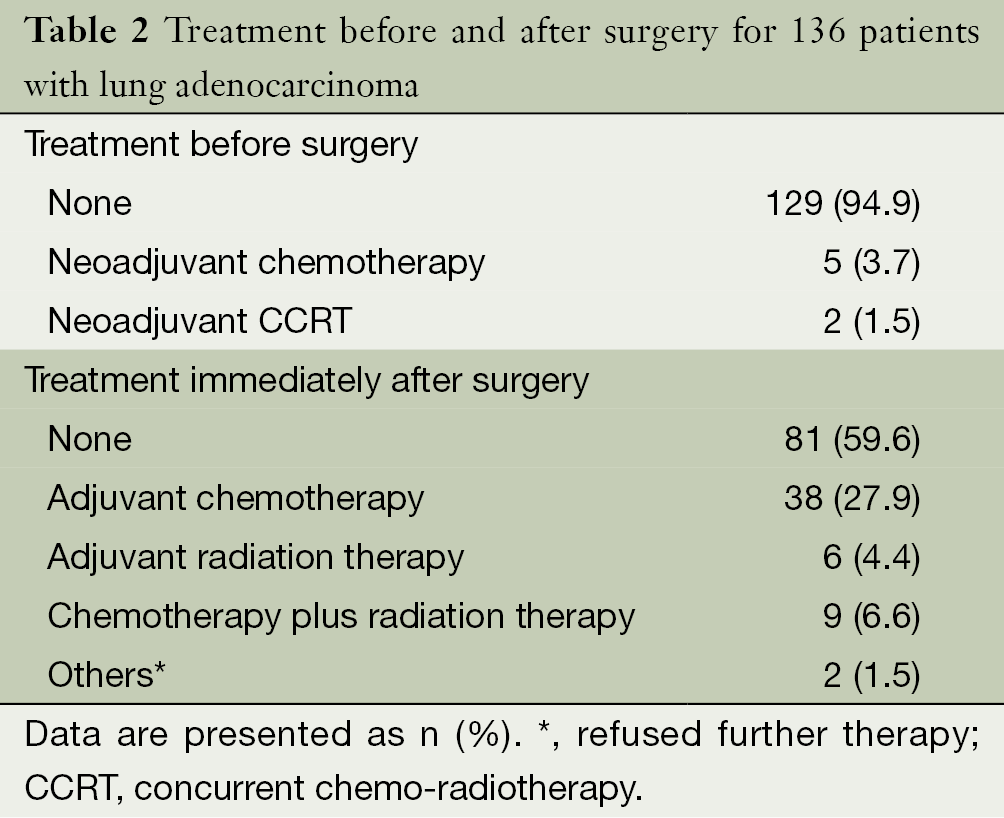 Associations between the clinical and pathologic variables, and IHC expression of p53 and Ki-67 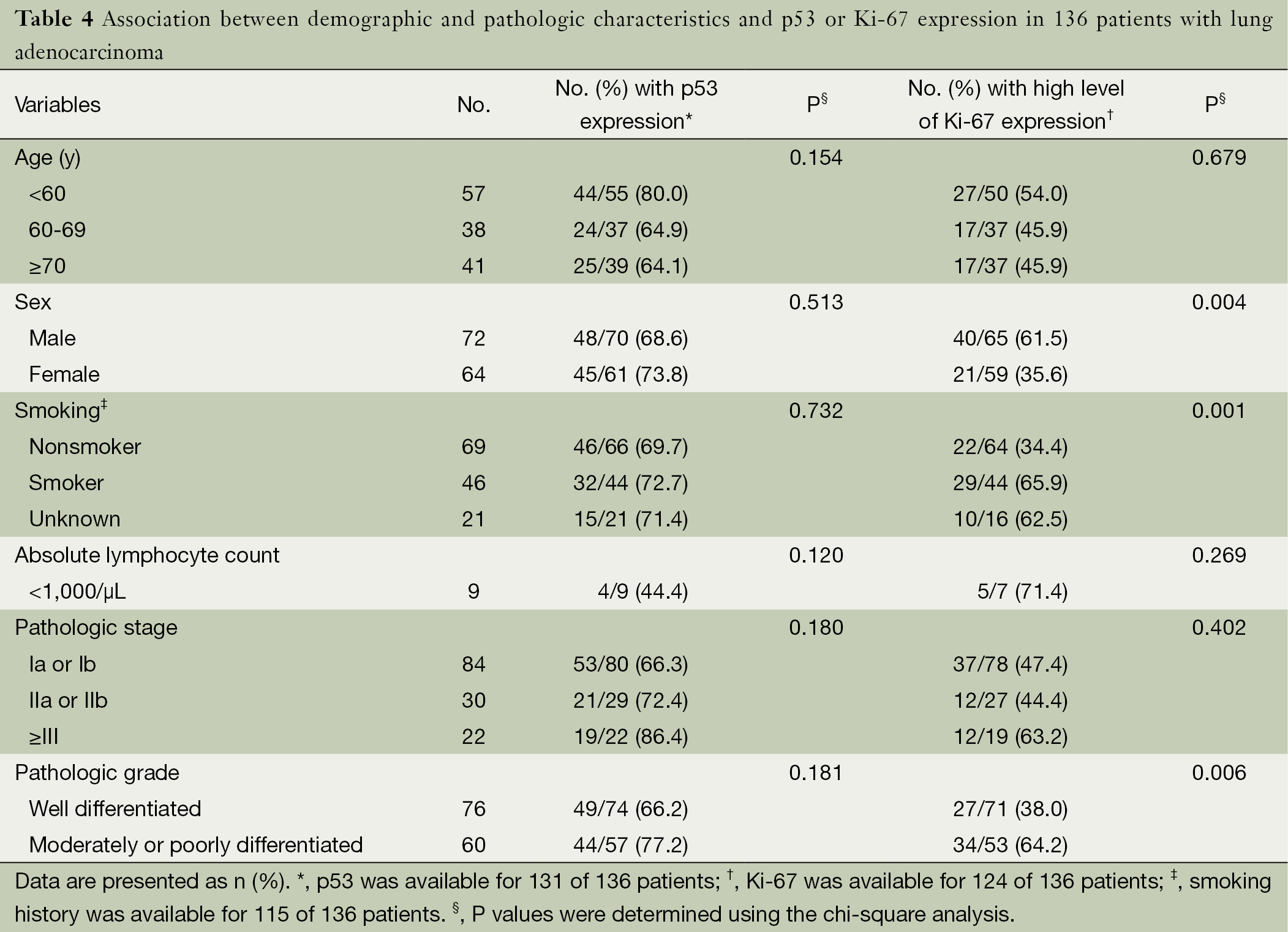 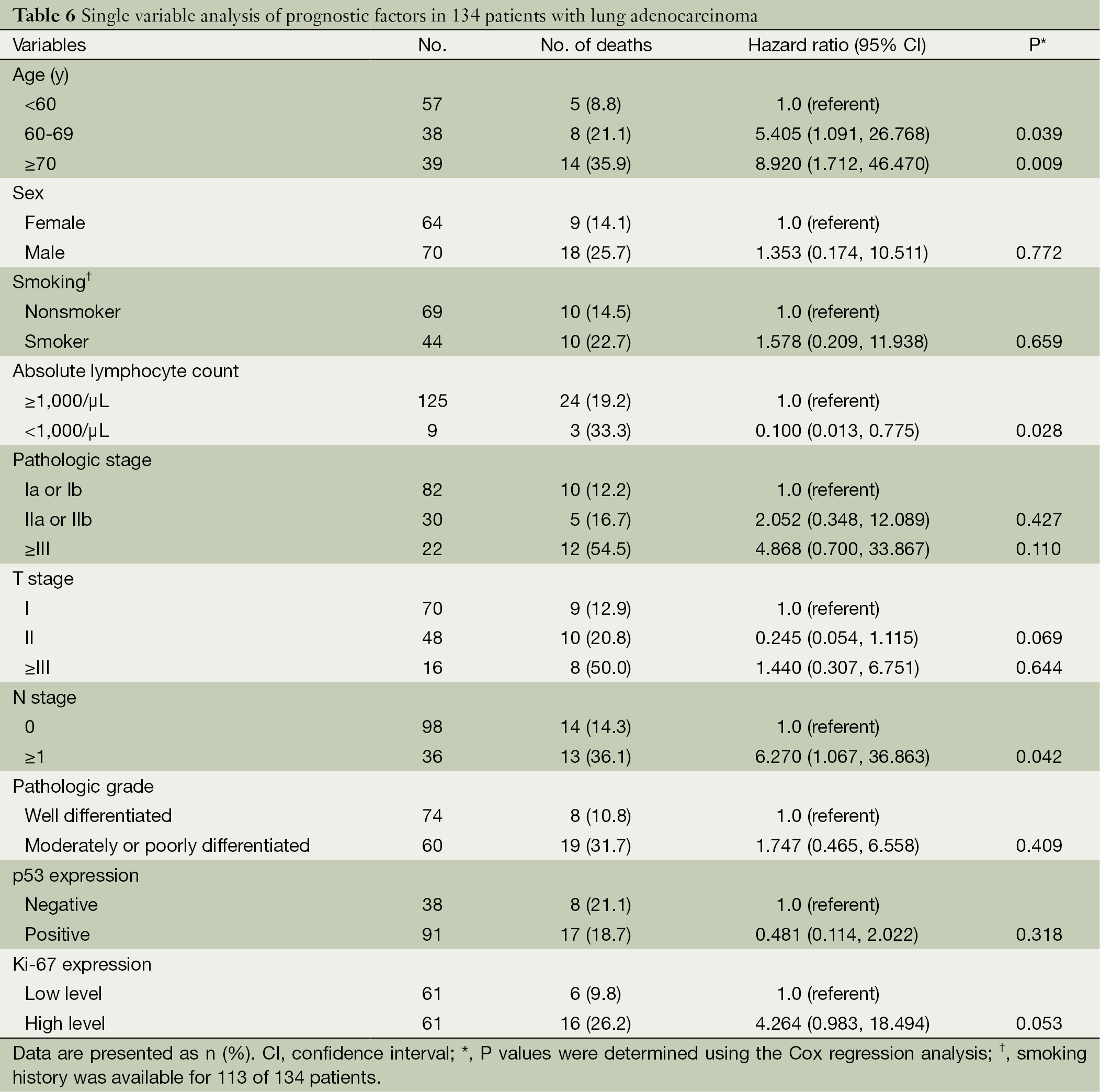 No significant associations were found between p53 and Ki-67 IHC expression (P>0.05). The influence of p53 and Ki-67 on actuarial survival or poor outcome was analyzed by using the Kaplan-Meier method. Between a combination of all pathologic stages (I, II, and ≥III), p53 showed no association with patient survival (log-rank test, χ2=0.148; P=0.701) (Figure 4); the same pattern was observed upon fitting the method separately to stage I, II or ≥III (Figure 5A-C). On the other hand, high level of Ki-67 expression correlated significantly with decreased survival (log-rank test, χ2=5.637; P=0.018) in stages combined (Figure 4); however, the effect was limited to stage ≥III (log-rank test, χ2=5.939; P=0.015), whereas such an effect was not observed separately among stage I or II (Figure 6A-C).

Approximately 40% of lung cancers are adenocarcinomas that occur mainly in current or former smokers. It is also the most common type of lung cancer observed in non-smokers (19). The incidence of lung cancer is steadily increasing in Korean women although the majority of them are non-smokers; histologically, the tumors are predominantly adenocarcinomas (2,20). The lung adenocarcinoma includes several histologic subtypes and is a highly heterogeneous tumor in terms of pathology, biology, and clinical behavior (21). As outcomes may vary even among patients with the same tumor type and stage, it is important to identify additional factors that may be used to detect patients with operable lung cancer who are at high risk for worse outcomes.

A p53 mutation inactivates the tumor suppressor gene, enabling the invasion, metastasis, proliferation, and cell survival of malignant cells (22). The genetic defect is frequently identified in more than 50% of resected NSCLCs (23-25). Conflicting reports have suggested that the p53 mutation is associated with decreased survival, no significant change in survival, or improved survival in lung cancer patients (26-29). IHC expression of p53 is generally regarded as indicative of a missense mutation of p53 gene (8).

The Ki-67 protein is a cellular marker for proliferation and is present during all phases of the cell cycle (G1, S, G2 and mitosis), but is absent in resting cells (G0) (30). A monoclonal antibody against the Ki-67 antigen has been utilized to assess tumor proliferation, and high expression level of Ki-67 in the tumor tissue is reported to be associated with poor prognosis in NSCLC (13,31). However, there was a report suggesting that Ki-67 level did not influence survival in NSCLC (32).

This retrospective study demonstrated that high expression level of Ki-67 in tumor cells was a poor prognostic factor for survival in patients with lung adenocarcinoma (P=0.018) (Figure 4B), especially in advanced stages (≥ stage III) (P=0.015) (Figure 6C). A similar association was also observed in 3-year overall survival among patients with stages I, II and ≥III (P=0.026) (Figure 7B) (12,13,31). The correlation of Ki-67 expression with the prognosis of lung cancer has been reported (13,14). Our study demonstrated that the high level of Ki-67 expression was associated with the lower overall survival by the Kaplan-Meier method (P=0.018). Moreover, smoking and poor tumor differentiation were correlated with the high level of Ki-67 expression in the tumors, upon multivariate analysis (P=0.051 and P=0.008) (Table 5).

However, no association was observed between p53 and the prognosis, in the group that combined all stages, or upon considering different stages, or 3-year overall survival outcomes (P>0.05) (Figures 4A,5A-C,7A). These findings differed from other studies in that p53 was associated with decreased survival (12,26-28). Conversely, the IHC expression of p53 in tumor cells tended to have a better outcome among patients with lung adenocarcinoma (28,29), although it was not statistically significant (P>0.05) (Figures 4A,5A,B). Discrepancies in the findings between previous reports and our results may result from the differences in patients’ characteristics between these studies.

In our study, the frequency of the p53 positivity by IHC was relatively high (71.0%), compared to other studies’ findings showing that p53 in the tumor occurred in the half of lung cancer cases (23-25). We collected the pure adenocarcinoma cases. Other studies, however, recruited NSCLC cases, including adenocarcinoma, squamous cell carcinoma and other non-small cell carcinoma. The study participants included a large fraction of women (47.1%), non-smokers (50.7%), and pathologic stage Ia cases (45.6%) (Table 1). Furthermore, the number of deaths included 11 patients (13.1%) with stage I (n=84), 5 (16.7%) with stage II (n=30) and 4 (18.2%) with stage ≥III (n=22) (Table 3). Overall, the 3-year cumulative survival rates were 90.6% for stage I, 80.7% for stage II, and 46.2% for stage ≥III, respectively. Thus, the lower number of deaths may statistically affect the survival analysis in patients with operable lung adenocarcinoma.

Zhang et al. identified 20 out of 21 known lung cancer gene mutations were found in all regions of the same tumor from 11 localized lung adenocarcinomas; post-surgical relapse was significantly associated with most of the subclonal mutations that cause tumor heterogeneity in their primary tumors (38). In this study, there were 8 cases (9.5%) of recurrence or progression in stage I, 5 (16.7%) in stage II, and 7 (35%) in stage IIIa (Table 3). Although a p53 or high level Ki-67 expression may not predict early recurrence after surgery in our findings, it bears consideration that close follow-up should be performed in patients who underwent potentially curative resection of lung adenocarcinoma.

The limitations of our study include a small sample size, and the retrospective analysis of data. This may yield some bias in survival rates owing to uncensored data. Furthermore, the detection of p53 and Ki-67 expression was based on the IHC assay, which limits the diagnostic accuracy. The p53 may be overestimated in the tumor cells by the IHC assay instead of the molecular technique, as the p53 antibody clone DO7 used in this study recognizes both the wild-type and mutant p53 proteins. Consequently, weak or patchy staining with p53 antibodies may be considered positive results.

In conclusion, high expression level of Ki-67 in the tumor was found to be a poor prognostic marker in patients with higher-stage lung adenocarcinoma, which might potentially identify a subgroup of subjects with a higher risk of worse outcomes after surgery. We propose that the evaluation of Ki-67 expression using an IHC assay is important and useful in routine practice. However, as IHC analysis for p53 showed no clinical significance, further investigation is needed to verify its prognostic role in lung adenocarcinoma.

The authors would like to thank Ye Ran Choi, P.A., Hwan Hee Son, P.A. and Joon Young Park, P.A. for their assistance with data collection.