Amiodarone is a potent iodine-containing anti-arrhythmic agent widely used for management of supraventricular and/ or ventricular arrhythmias. This drug has a high efficacy when compared to other antiarrythmics but also has a wide range of adverse effects. A feared and potentially life threatening adverse effect is Amiodarone induced Pulmonary Toxicity (APT). 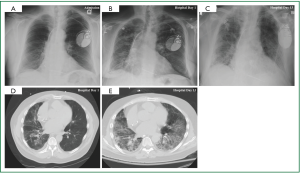 Amiodarone is an amphiphilic compound which can result in long elimination half life of approximately 30-108 days with a volume of distribution close to 5,000 liters (1). The active principal metabolite, desethylamiodarone, penetrates tissues and accumulates therein, thus providing a sustained source of release. Despite Amiodarone’s intended myocardial target, Amiodarone concentrations measured in unfractionated pulmonary parenchyma significantly exceed that of the heart (2).

The two most significant risk factors for APT are age and duration of therapy (3). Toxicity can occur at any point during treatment and/ or even after discontinuation of therapy. Those with the highest risk are patients who are administered 400 mg/day cumulatively for greater than two months or 200 mg/day for two years (4). Other risk factors are male gender, pre-existing lung disease, and high-dose supplemental oxygen therapy with or without mechanical ventilation (4). Ethnicity has also been implicated as a non-modifiable risk for APT. A study among Japanese individuals demonstrated a relatively high cumulative incidence of 4.2%, 7.8% and 10.6% at one, three, and five years respectively, with a mean maintenance dose of 141mg daily (5).

Clinical onset can be progressive with nonspecific symptoms of generalized weakness, cough, dyspnea, weight loss, occasional pleuritis, and pleural effusion. These symptoms can be masked by pre-existent cardiopulmonary disorder or overt cardiac failure. The confounding symptoms can delay diagnosis of APT (6). Severe cases can exhibit diffuse rales, hypoxemia and respiratory distress. The most dramatic presentation is similar to Acute Respiratory Distress Syndrome (ARDS). That is to say, a rapid onset with progressive diffuse pneumonitis and respiratory failure.

Amiodarone has potent inhibitory effects on lysosomal phospholipase leading to accumulation of phospholipid bound drug in membrane-rich structures (7). Drug induced phospholidiosis leads to formation of lipid-laden macrophages, known as foam cells in all organs. In the lungs, accumulation occurs in type II pneumocytes, intraalveolar cells, and interstitial inflammatory cells. There have been several suggested mechanisms of APT, but the two most likely hypotheses are cytotoxic effects to type II pneumocytes and lung parenchyma, and an immune-mediated mechanism in genetically predisposed patients (8).

Diagnosis is often one of exclusion as there are no specific laboratory analyses to confirm APT. Diagnosing APT is based on a combination of strong clinical suspicion, history, radiographic and clinical evidence, and the rigorous exclusion of alternative etiologies. Chest roentogenography shows bilateral diffuse or patchy infiltrates, more commonly in the right lobe. Early in the course of disease, ground glass opacities are also common. Pleural thickening and/or effusion, and multiple pulmonary nodules in the upper lobes secondary to iodine accumulation in type II pneumocytes has been described. Pulmonary function tests typically reveal either a restrictive or mixed obstructive/ restrictive pattern with a decreased diffusion lung capacity of 15-20% (9). The earliest abnormality in APT is a decrease in the diffusion capacity for carbon monoxide.

Gallium scanning, though nonspecific, is useful to demonstrate increased parenchymal activity early in the course of disease. Gallium scanning may also help differentiate APT from CHF, one of the common comorbidities that often confounds diagnosis (10). Bronchoscopy with bronchoalveolar lavage (BAL) and transbronchial biopsy are helpful in diagnosis (5). BAL findings suggestive of APT include a CD8+ predominant lymphocytic alveolitis, and increased phospholipid content. In difficult cases, open lung biopsy may be considered, however the known risk for worsening APT after thoracic surgery can become a potential deterrent. Physical insult to lung parenchyma is known to increase susceptibility to toxicity even if low dose Amiodarone therapy was used. It is also for this reason that cardiac surgery patients are at increased risk, given the frequent perioperative use of Amiodarone for the control of postoperative tachyarrhythmia (11).

Pathologic findings also include alveolar sepal widening with inflammatory infiltrate, type II pneumocyte hyperplasia, interstitial fibrosis, and diffuse interstitial pneumonitis. A classic finding is the aforementioned lipid-laden macrophages in alveolar spaces (Figure 2A), as are cytoplasmic lamellar bodies (5). Given that these findings have also been reported in nontoxic patients undergoing chronic treatment with Amiodarone, their existence is suggestive of Amiodarone exposure, and less indicative of Amiodarone toxicity (9). Conversely, the corollary of their absence makes diagnosis of APT unlikely. Other pathologic manifestations are patchy bronchiolitis obliterans organizing pneumonia or diffuse alveolar damage with hyaline membrane formation (Figure 2B).

The primary treatment when APT becomes a consideration is immediate discontinuation of Amiodarone. Due to its accumulation in fatty tissues and long elimination half-life, pulmonary toxicity may initially progress despite drug discontinuation and may recur after steroid withdrawal (12). Discontinuation of Amiodarone as sole therapy may be sufficient if the extent of the disease is limited. Corticosteroids should be administered in patients who show substantial involvement of the lung parenchyma on imaging studies with or without concomitant hypoxemia. Systemic corticosteroids are recommended for at least 4-12 months to avoid relapse (5). Evidence has shown benefit from this treatment strategy as demonstrated by earlier recovery and decreased parenchymal fibrosis. Chest roentgenogram findings can take up to 18 months to completely resolve (11). When treated early, most APT cases are considered reversible with good prognosis (10). More precipitous presentations can lead to worse outcomes, including pulmonary fibrosis and/or death, particularly in cases that are complicated by ARDS (5).

In summary, Amiodarone toxicity must be considered in the differential diagnosis of all patients on the medication with progressive or acute respiratory symptoms, especially those with history of chronic lung disease, supplemental oxygen therapy and post cardiac surgery. Bronchoscopy with BAL and transbronchial biopsy can be useful in diagnosis. Early aggressive corticosteroid therapy should be employed as a viable treatment strategy. APT resolution may be gradual, and supportive care for patients is critical for successful outcome.