Inflammatory myofibroblastic tumour of the lung: a reactive lesion or a true neoplasm?

First described by Brunn in 1937, inflammatory myofibroblastic tumour (IMT) represents an extremely rare type of inflammatory pseudo-tumour that appears most commonly in children and young individuals with a prevalence ranging from 0.04% to 0.7% irrespective of the gender and race of the world population (1,2). There has been an ongoing controversy whether an IMT is a reactive lesion or a true neoplasm (3). This has been revealed in a large number of individual case reports and series with subtle differences in their clinico-pathological findings and the results of the treatment provided. Purpose of the paper is, through a literature review, to identify the clinical approach of this rare tumour highlighting key features and the available management options.

A thorough literature review was performed to identify the most relevant clinical and radiological features of this rare tumour. A common management approach with available treatment options was analysed. Just over a hundred papers were identified in the literature over the last 20 years. The majority of them were case reports with only two review articles—most recent one was published in 2003.

IMT, previously part of the family of the inflammatory pseudo-tumours, is a separate entity of plasma cell granulomas arising from a various anatomical locations in the body. The most frequently documented site appears to be the lung. It affects predominantly younger population with a prevalence of up to 1% of all lung tumours (4,5). Although the aetiology of IMT seems plainly unclear, a wide variety of relatively similar clinico-pathological features tend to unite these tumours as a distinct separate clinical entity.

Although IMT can sometimes be detected as an incidental finding on a routine chest X-ray (CXR) (Figure 1), its frequent presenting symptoms may vary from cough, dyspnea, hemoptysis and weight loss to general fatigue and arthralgias. Computed tomography (CT), magnetic resonance imaging (MRI) and positron emission tomography (PET) CT have a pivotal role in identifying the precise location of the mass (Figures 2-4). CT guided biopsy of the lesion and frozen section often provides inconclusive results and therefore surgical excision seems to be the unavoidable mean for the accurate diagnosis of IMT through cytological, histological and immunohistochemical analysis. 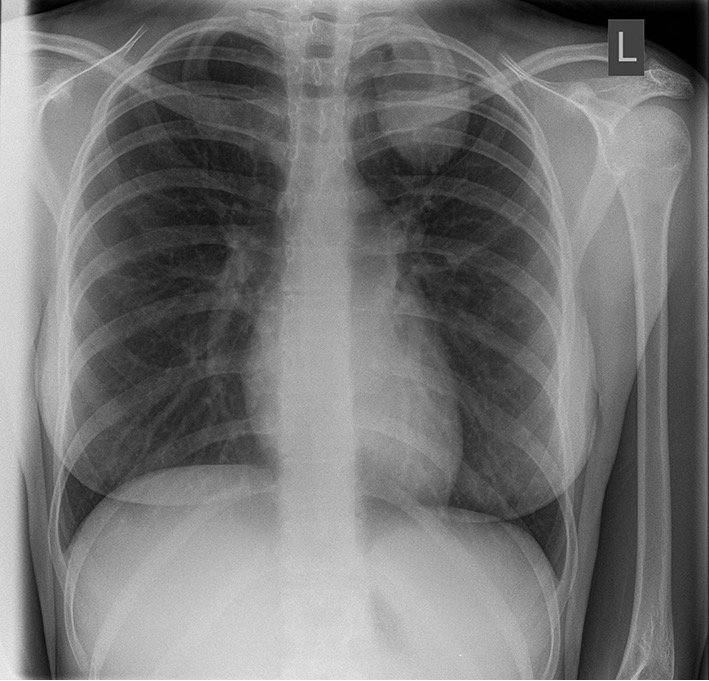 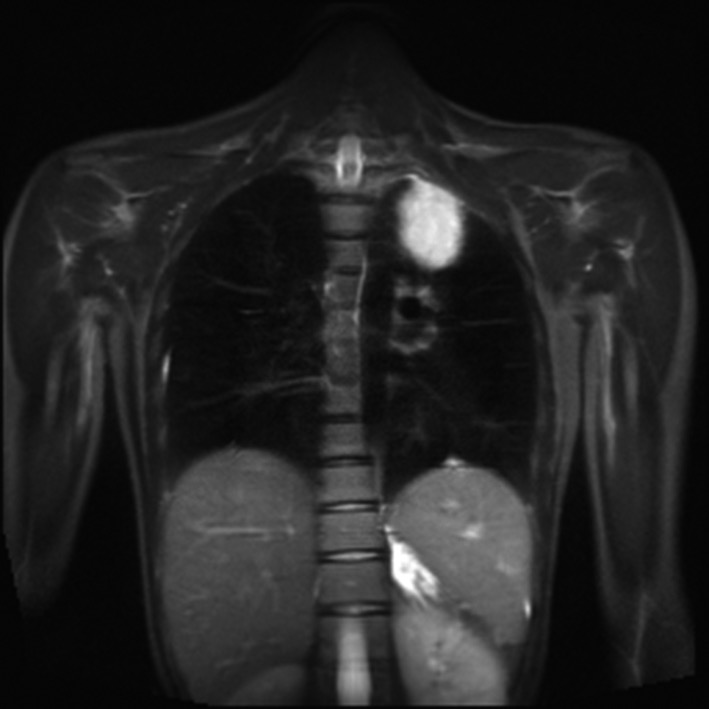 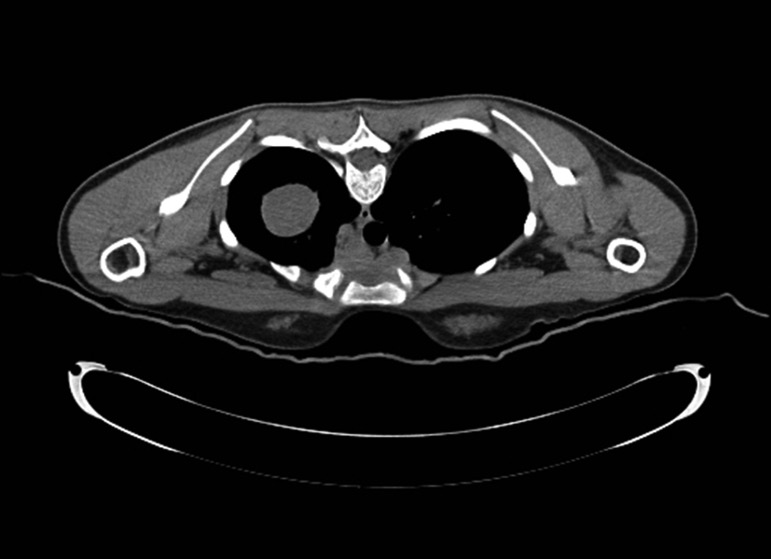 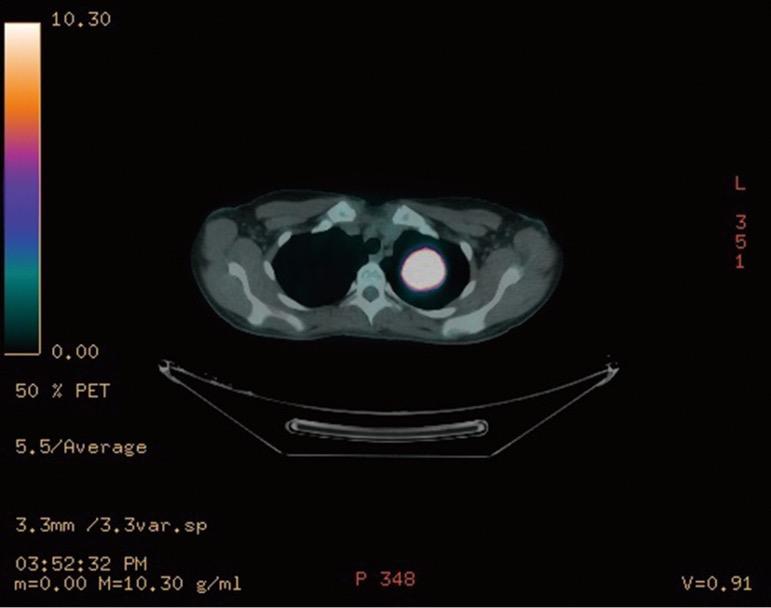 Microscopic analysis of the tumour normally demonstrates a mixture of inflammatory, myofibroblastic spindle cells, typically, a large number of plasma cells which appear polyclonal in nature on immunohistochemistry with IgG predominance (Figures 5-7). A relation between IMT and IgG4 syndrome has been reported in the literature (6). IMT was originally thought to be nonmalignant by world health organisation in 2002 (7). However, more recent report of chromosomal translocation involving anaplastic lymphoma kynase (ALK) gene present in 50% of IMTs may suggest a contradictory opinion (8). Changes at the chromosomal level like rearrangements involving the ALK receptor tyrosine-kinase locus region (chromosome band 2p23) (9), or DNA aneuploidy in IMT indicate a rather benign nature of this so called low-grade malignant tumour, especially due to the fact that the IMT is a slow and locally growing tumour (10). 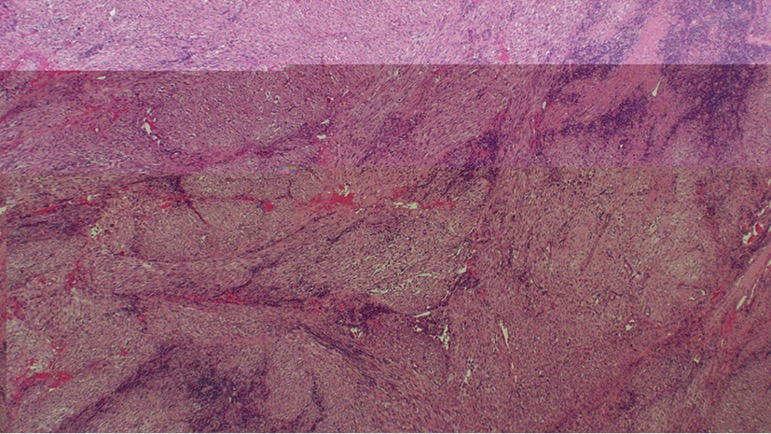 Figure 5 A low power image of the tumor which comprises interlacing fascicles of bland spindle cells which obliterate the underlying architecture of the lung (H&E ×20 magnification). 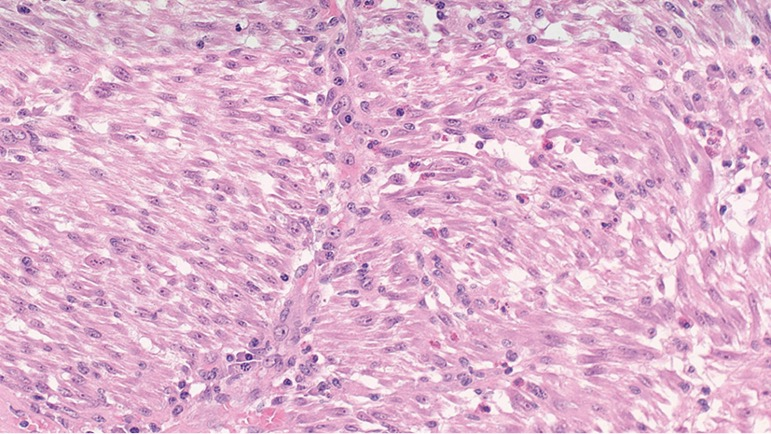 Figure 6 Spindle cell component that is admixed with inflammatory cells including plasma cells and eosinophils. The spindle cells show minimal pleomorphism and mitotic figures which are sparse (H&E ×200 magnification). 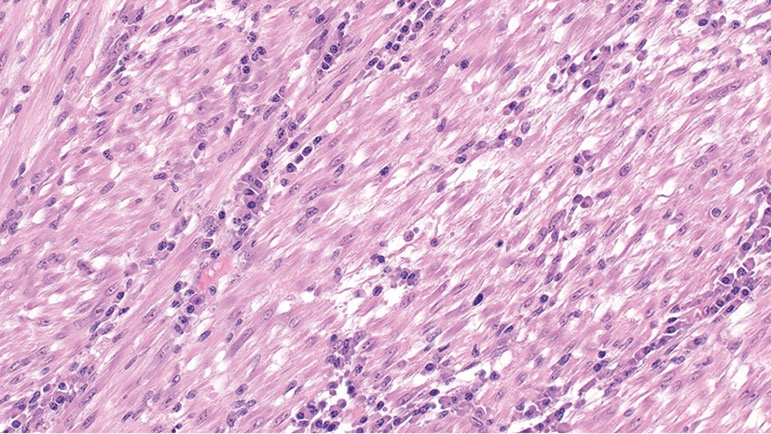 Figure 7 Spindle cell component that is admixed with inflammatory cells including plasma cells and eosinophils. The spindle cells show minimal pleomorphism and mitotic figures which are sparse (H&E ×200 magnification).

When evaluating a patient with a solitary lung mass with a sinister appearance on a radiogram the differential diagnosis can include: pseudo lymphomas, sarcomas, malignant lymphomas and lymphoid hyperplasia, as well as variety of chronic pneumonitis etc. The role of fluorodeoxyglucose (FDG)-PET/CT and octreoscan as ancillary imaging tools is significant for the differential diagnosis of solitary lung mass. There have been reported few cases of positive octreoscan IMT in the literature (11). However, a meticulous testing results of the cytological, histological and immunohistochemical features can make the diagnosis of IMT clearer.

Treatment of IMT depends on location of the tumour, size and extent of the disease. Generally, literature mandates surgical resection of the tumour if feasible, both, for an accurate diagnosis and the long term survival benefit. There is not enough evidence available about the recurrence of IMT, especially after the complete resection of the tumour. However, the use of chemotherapeutic agents, such as, paclitaxel and carboplatin may be of little or no importance in the cases where there is recurrence or an anatomically unresectable tumour (12). In addition crizotinib, an ALK inhibitor, has been reported effective in cases where ALK has been positive on immunohistochemical staining (8). Other adjuvant therapies like steroids and anti-inflammatory drugs have shown some benefit in cases where metastasis to bones and other distant organs occurred. However, an early detection and a complete resection of the tumour has shown excellent results and so far remains the fundamental means for a definitive treatment of IMT.

IMT represents an extremely rare low grade malignancy, with the lung as the commonest site of presentation. Although its incidence is fairly scarce, the existing literature clearly defines its relative similarities in terms of clinico-pathological and radiological findings and almost uniformly favours surgical resection as a mainstay for the most efficient management strategy. The recurrence rate remains low and a 10-year survival rate is around 80% (9).