Effects of treatment with long-acting muscarinic antagonists (LAMA) and long-acting beta-agonists (LABA) on lung function improvement in patients with bronchiectasis: an observational study

Bronchiectasis is a chronic lung disease characterized by cough, sputum, and repeated bronchial infections with permanent bronchial dilatation (1). Bronchiectasis is a particularly important disease entity in South Korea because its overall prevalence is higher than those in other countries (2,3). Approximately 18% of patients with bronchiectasis require hospitalization, and the in-hospital all-cause mortality is 2.9% (2).

This was a retrospective, observational study comparing the lung functions in patients with bronchiectasis before and after long-acting bronchodilator treatment to evaluate the effectiveness of LAMA and LABA. We gathered data on adult patients with bronchiectasis (age ≥18) who were prescribed LAMA, LABA, or both between January 2008 and December 2018 at Asan Medical Center, a tertiary referral hospital in Seoul, Korea. We extracted data from patients diagnosed as bronchiectasis with CT scan and we excluded patients diagnosed with asthma or chronic obstructive pulmonary disease (COPD) who have been found to benefit from using long-acting bronchodilators (7); moreover, we excluded patients with a history of cigarette smoking, even 1 pack year, which is the most important cause of COPD in South Korea (8). We also performed a subgroup analysis by excluding patients who received concurrent treatment such as antibiotics, systemic steroids, or mucolytics, all of which affect lung function by improving mucociliary clearance and reducing chronic bronchial infection and inflammation (1,5).

Patient data were extracted from the electronic medical records by using the in-house data extraction program at Asan Medical Center. We obtained baseline characteristics including age, sex, body mass index (BMI), and modified Medical Research Council (mMRC) dyspnea grade at the time of the first prescription of bronchodilator. In addition, comorbidities of pulmonary and extra-pulmonary disease and the type of prescribed bronchodilators were identified.

All patients were treated with LAMA, LABA, or both for at least 1 month. The patients in the LAMA group were prescribed tiotropium, and those in the LABA group were prescribed one of the five kinds of LABA: indacaterol, salmeterol/fluticasone, formoterol/budesonide, formoterol/beclomethasone, and vilanterol/fluticasone. The LAMA-LABA group were prescribed 1 of the 3 combinations of LAMA and LABA: tiotropium/olodaterol, umeclidinium/vilanterol, and glycopyrronium/indacaterol. To measure the medication adherence, we calculated the medication possession ratio in all patients (11-14). Each patient received specific instructions on the correct use of devices by a trained coordination nurse.

Paired Student’s t-test was used to compare the lung functions of each patient before and after treatment. Linear regression analysis was performed to identify the factors related to the effects of bronchodilators in lung function. Pearson’s correlation analysis was used to determine the correlation between baseline FEV1 (% predicted) and the changes in FEV1 (liter) after treatment. All statistical analyses were performed using the SPSS 21.0 software (IBM Corporation, Armonk, NY, USA) and the graphs were drawn using the SPSS 21.0 and the R studio software (R studio, Inc., Boston, MA, USA).

The study was conducted in accordance with the Declaration of Helsinki and the Harmonized Tripartite Guideline for Good Clinical Practice from the International Conference on Harmonization. The Institutional Review Board (IRB) of Asan Medical Center approved this study’s protocol (#2019-0122) and waived the need for written informed consent based on the retrospective nature of the study.

Characteristics of the patients 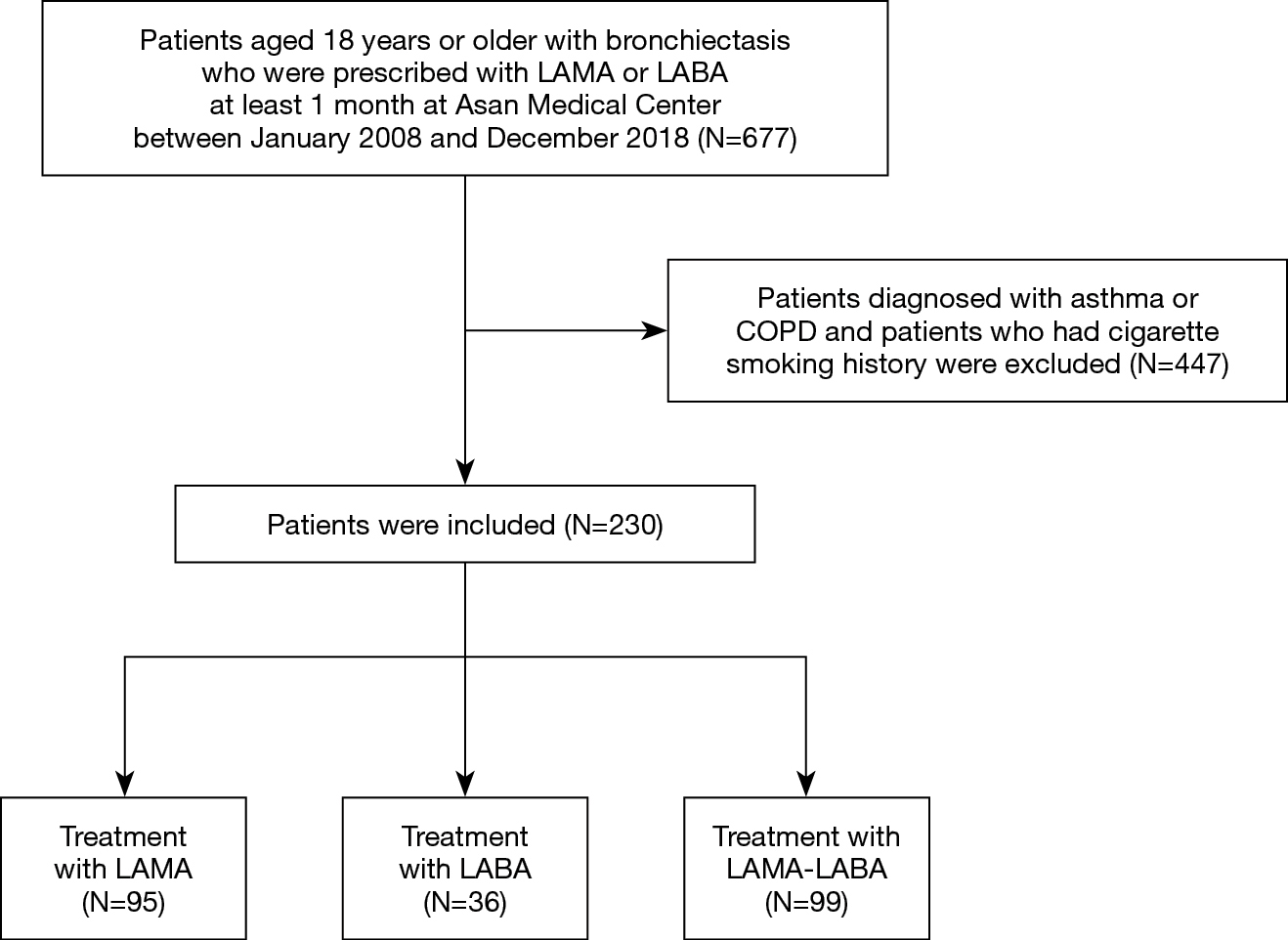 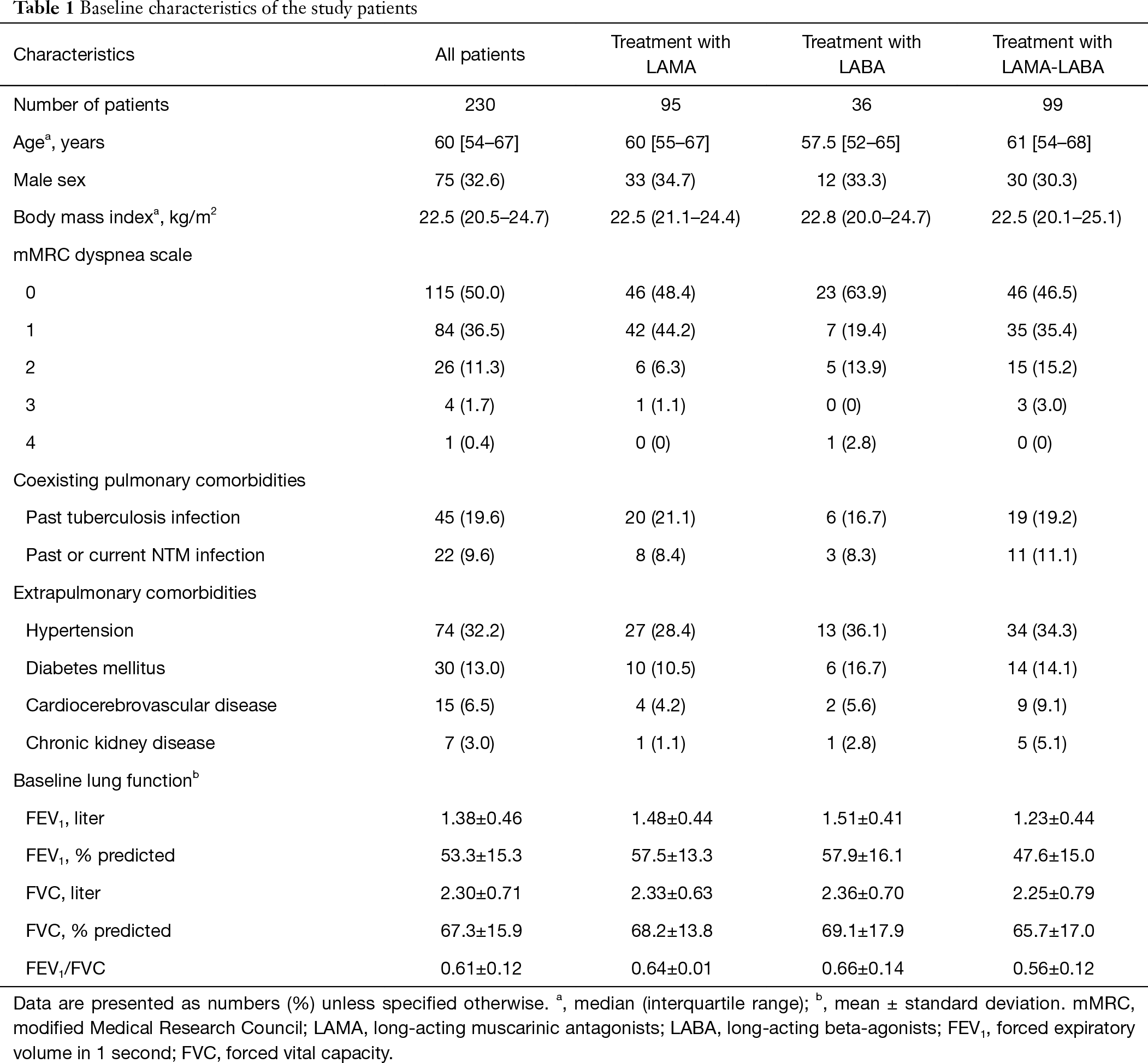 Effect of LAMA, LABA, or both on lung function in bronchiectasis patients

Subgroup analysis after excluding patients treated with other medications

We performed a subgroup analysis by excluding patients who were concurrently treated with antibiotics, systemic steroids, or mucolytics (Table S1, Figure S1). In the remaining 97 patients without concurrent treatments, the FEV1 was increased by with 0.107 liters (SD, 0.167; P<0.001), 0.165 liters (SD, 0.209; P=0.005), and 0.165 liters (SD, 0.187; P<0.001) in the LAMA, LABA, and LAMA-LABA groups, respectively (Figure 3). Of the 106 patients who received antibiotics in the follow-up period, 18 had been newly started on long-term antibiotics, such as azithromycin, roxithromycin, erythromycin, and clarithromycin, during the follow-up period, and the remaining 88 patients had been prescribed short-term antibiotics because of pneumonia or worsening of clinical symptoms in the outpatient or inpatient clinic. We excluded both groups of patients.

Factors associated with the response of FEV1 to bronchodilator treatment 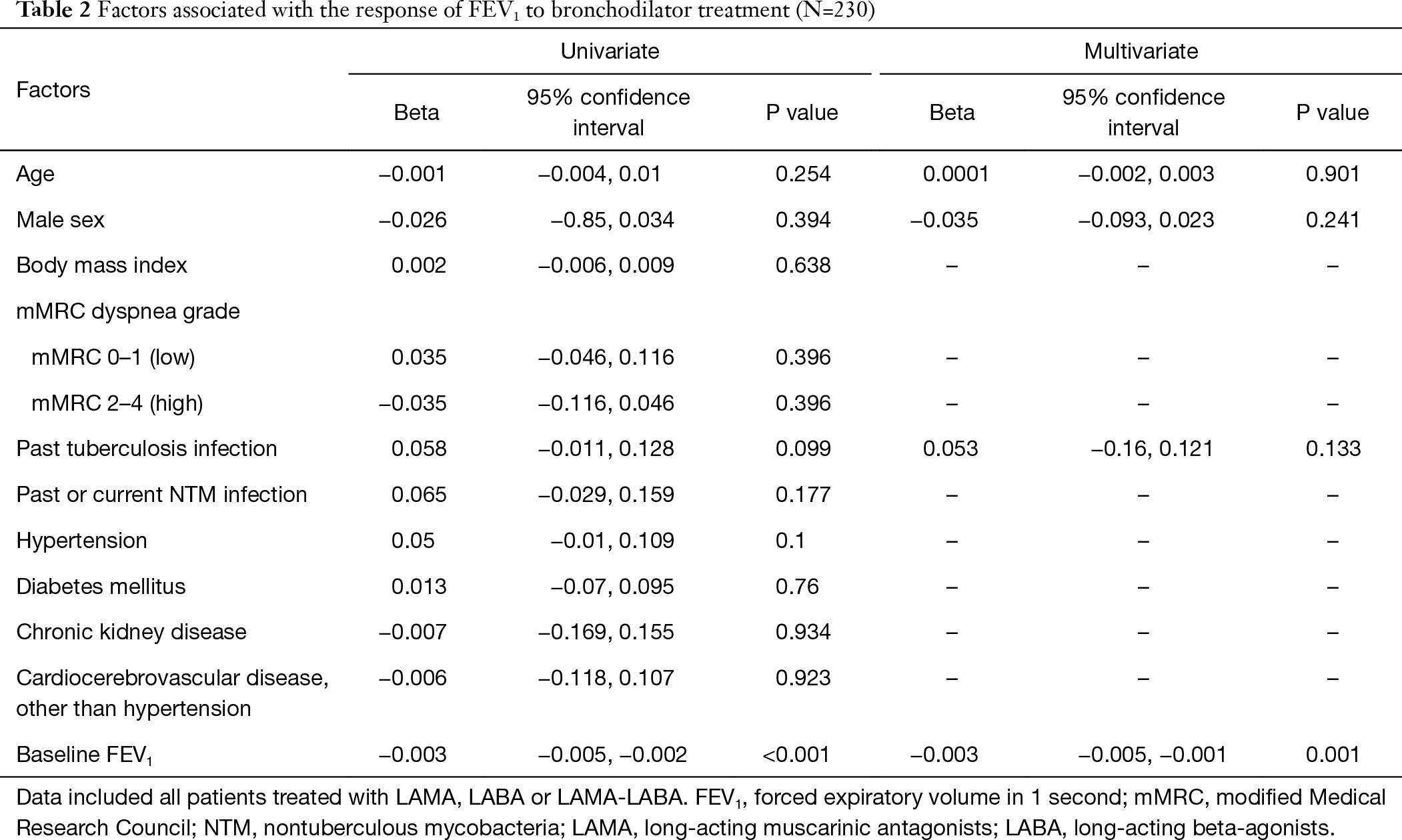 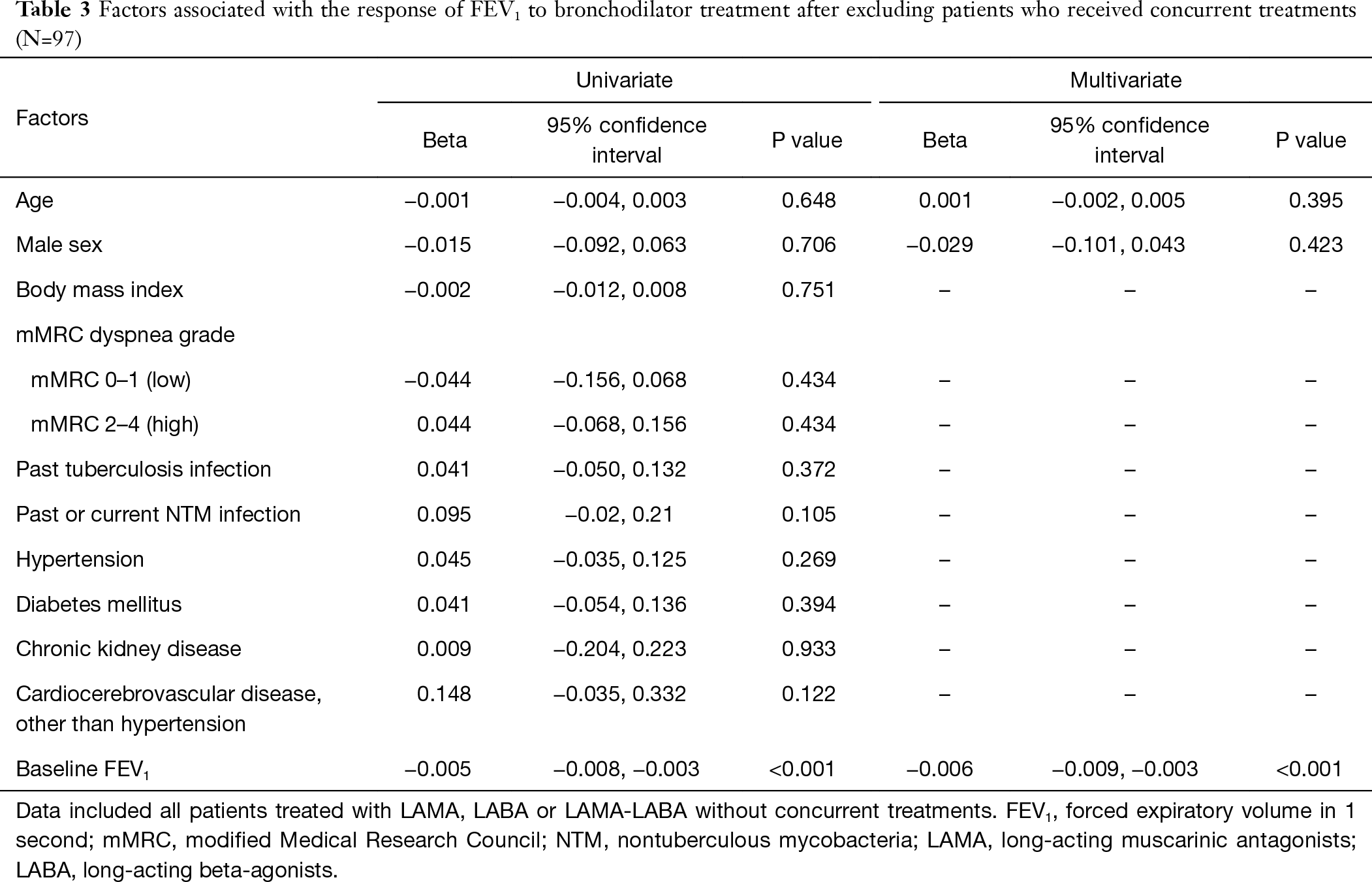 In this retrospective study, we found that bronchodilator treatment with LAMA, LABA, or both was effective in improving the lung function in patients with bronchiectasis, most of whom did not suffer from severe dyspnea but had poor lung functions. Lower baseline FEV1 was significantly associated with better response to bronchodilator treatment. These results were also confirmed in a subgroup analysis after excluding patients concurrently treated with antibiotics, mucolytics, or systemic steroids, thus signifying the sole beneficial effect of LAMA, LABA, or both in patients with bronchiectasis.

This study has limitations inherent to its retrospective, observational design. First, we could not evaluate the compliance of bronchodilator use during the treatment period and calculated the medication possession ratio instead—the medication possession ratio of our study patients was 89.2%, which may be regarded to indicate adequate adherence (11-14). Also, observational study design is not suitable for determining the long-term effectiveness of an intervention because the effects of confounding factors cannot be adequately excluded (22). To partially compensate for such limitations, we performed a subgroup analysis after excluding patients who received other treatments that may affect lung function and found that the results were in line with those from the entire cohort.

Among the 36 patients in the LABA group, only five were prescribed indacaterol alone, while others were prescribed LABA and inhaled corticosteroids. Therefore, we analyzed the five patients that were prescribed LABA alone using the Wilcoxon signed-rank test to compare FEV1 before and after treatment. The result showed a P value of 0.08, which indicated no statistical significance but showed a trend toward improved lung function with treatment. Statistical significance may be achieved as the number of patients increases.

We thank Dr. Joon Seo Lim from the Scientific Publications Team at Asan Medical Center for his editorial assistance in preparing this manuscript.

Conflicts of Interest: All authors have completed the ICMJE uniform disclosure form (available at http://dx.doi.org/10.21037/jtd-20-1282). The authors have no conflicts of interest to declare.

Ethical Statement: The authors are accountable for all aspects of the work in ensuring that questions related to the accuracy or integrity of any part of the work are appropriately investigated and resolved. The study was conducted in accordance with the Declaration of Helsinki (as revised in 2013) and the Harmonized Tripartite Guideline for Good Clinical Practice from the International Conference on Harmonization. This study protocol was approved by the Asan Medical Center Institutional Review Board (approval number, 2019-0122). Informed consent was waived by the board due to the retrospective nature of the study.