In China, the incidence of esophageal squamous cell carcinoma (ESCC) is 20.9 out of 100,000, which is the highest in the world (1-3). At the time of ESCC treatment, most patients are in the middle and late stages, and there are a large number of patients with supraclavicular lymph node (SCLN) metastasis (10.3–17.6%). Lymph node surgery and radical surgery are considered to be the main diagnostic treatments for patients with resectable ESCC (4,5). While there have been no strict prospective, randomized, controlled clinical studies to provide supporting evidence, with the use of a lymph node cleaning scope, the greater the surgical effect is, and the better the radical cure effect; however, the operation risk will also increase, especially in the neck, such as with chest minor cleaning for cervical anastomotic fistula, resulting in laryngeal recurrent nerve injury and a high incidence of respiratory complications, affecting the patients’ rapid recovery and quality of life (6-8). Therefore, how to reasonably choose the range of lymph node dissection for patients with high risk of SCLN metastasis, and to ensure the curative effect while reducing the adverse reactions of surgery is the current problem.

In recent years, there are some “selective minor lymph node cleaning” studies (9,10) performed, aiming at providing radical surgery, reducing operation risks, improving survival, and making treatment accuracy more robust. However, these studies have some limitations. First, even if preoperative SCLN metastasis was found and immediate salvage treatment was implemented, there was still a lag in treatment. Second, the risk of SCLN metastasis was not objectively quantified, and assessments based on subjective experience are not rigorous enough.

By searching multiple databases, including PubMed, the nomogram model has been widely and successfully used for prediction and survival analyses of a variety of cancers, quantifying risks by considering all known clinical variables, thus allowing individualized risk assessment and prognosis prediction of a variety of cancers (11-18). However, a prediction model that can be applied for the clinical quantitative assessment (19,20) of SCLN metastasis in terms of the risks of ESCC surgery has not been established. Therefore, in this paper, a nomogram prediction model was established to analyze the known clinical data to quantify SCLN metastasis risk assessment in the postoperative period, aiming to target elderly patients with ESCC (two-field lymphadenectomy) if further retrospective radiation and chemotherapy or SCLN cleaning is needed after surgery and to provide an important reference for treatment decisions.

We present the following article in accordance with the TRIPOD reporting checklist (available at http://dx.doi.org/10.21037/jtd-20-1388).

The study was conducted in accordance with the Declaration of Helsinki (as revised in 2013). The study was approved by institutional/regional/national ethics/committee/ethics board of Fujian Union hospital (No.: 2020KY017) and informed consent was taken from all the patients. The study did not constitute harm and potential risks to donors.

Rejection criteria: (I) cases confirmed as M1 intraoperative/postoperative: no evidence of distant metastasis was found in the preoperative examination, while distant metastasis was confirmed from intraoperative exploration/postoperative pathology; (II) intraoperative/postoperative T4b stage was confirmed; (III) it was proven intraoperatively that regional lymph node fusion into clusters could not ensure R0 resection or the resectability of wrapping the important vessels; (IV) simultaneous surgical treatment of other diseases was required; (V) after inclusion, due to preoperative sudden severe complications (unable to tolerate surgery or anesthesia) the treatment plan of this study was not suitable or could not be implemented as planned.

Follow-up was conducted every three months for the first three years, every six months for the next two years, and once a year after five years. Follow-up of the study was complete in the May of 2015, and achieved a minimal follow-up duration of 18 months in the data set. Overall survival (OS) was measured from the time of surgery to the last date of follow-up. The survival status of patients was collected at the last date of follow-up. 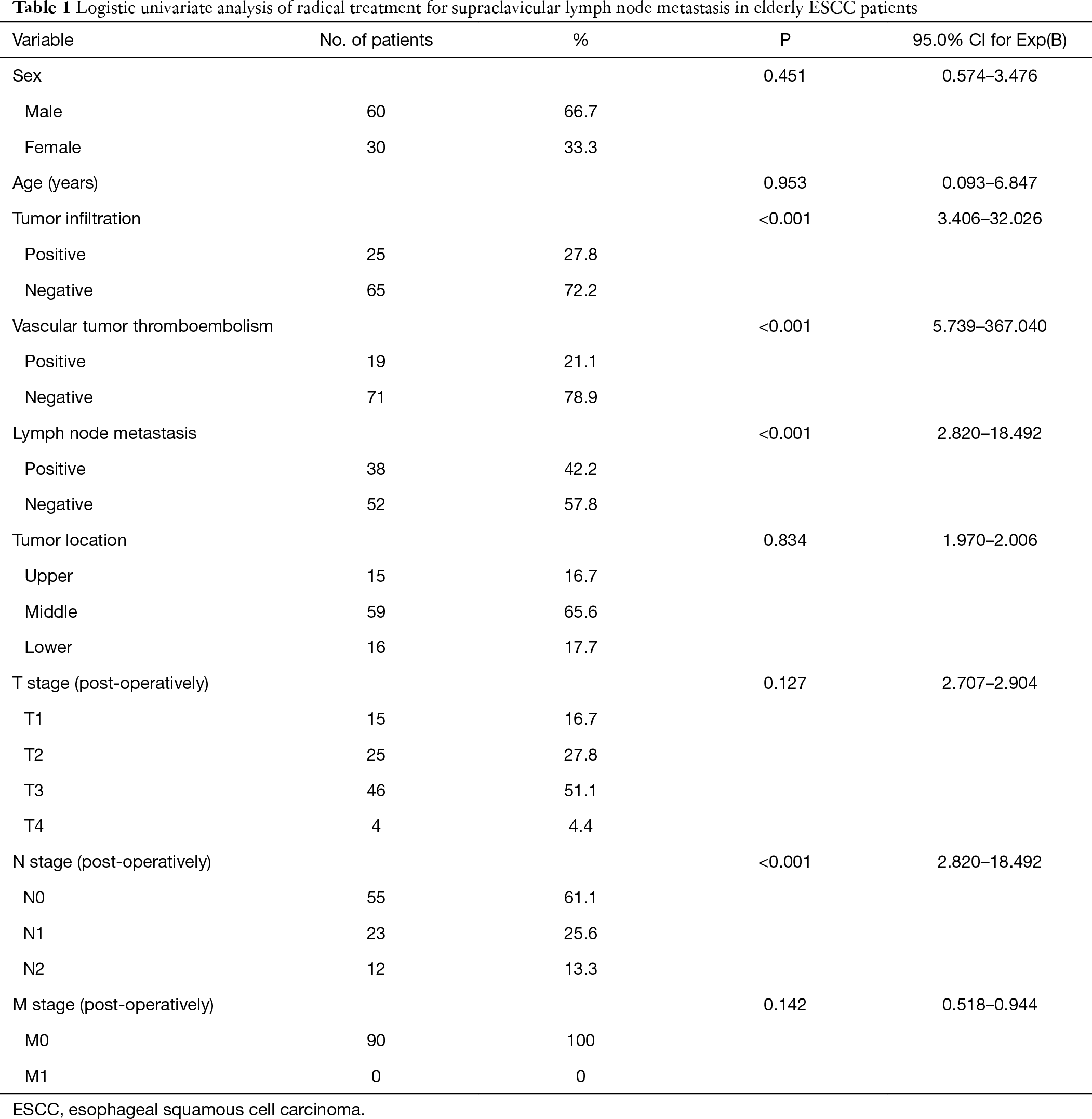 With a median follow-up time of 40 months, the 3-year OS and disease-free survival (DFS) rates were 47.4% and 42.1% in SCLN-positive patients, respectively, which were significantly lower than the corresponding rates of 69.2% and 65.4% in SCLN-negative patients.

SCLN metastasis had a statistically significant impact on postoperative survival in elderly ESCC patients (P=0.028) which were showed in the Kaplan-Meier survival curve and cumulative risk curve. Over time, the cumulative risk of supraclavicular lymph node metastasis increased, the survival probability decreased, and the survival time was shortened (Figure 1) (Figures S1-S3). 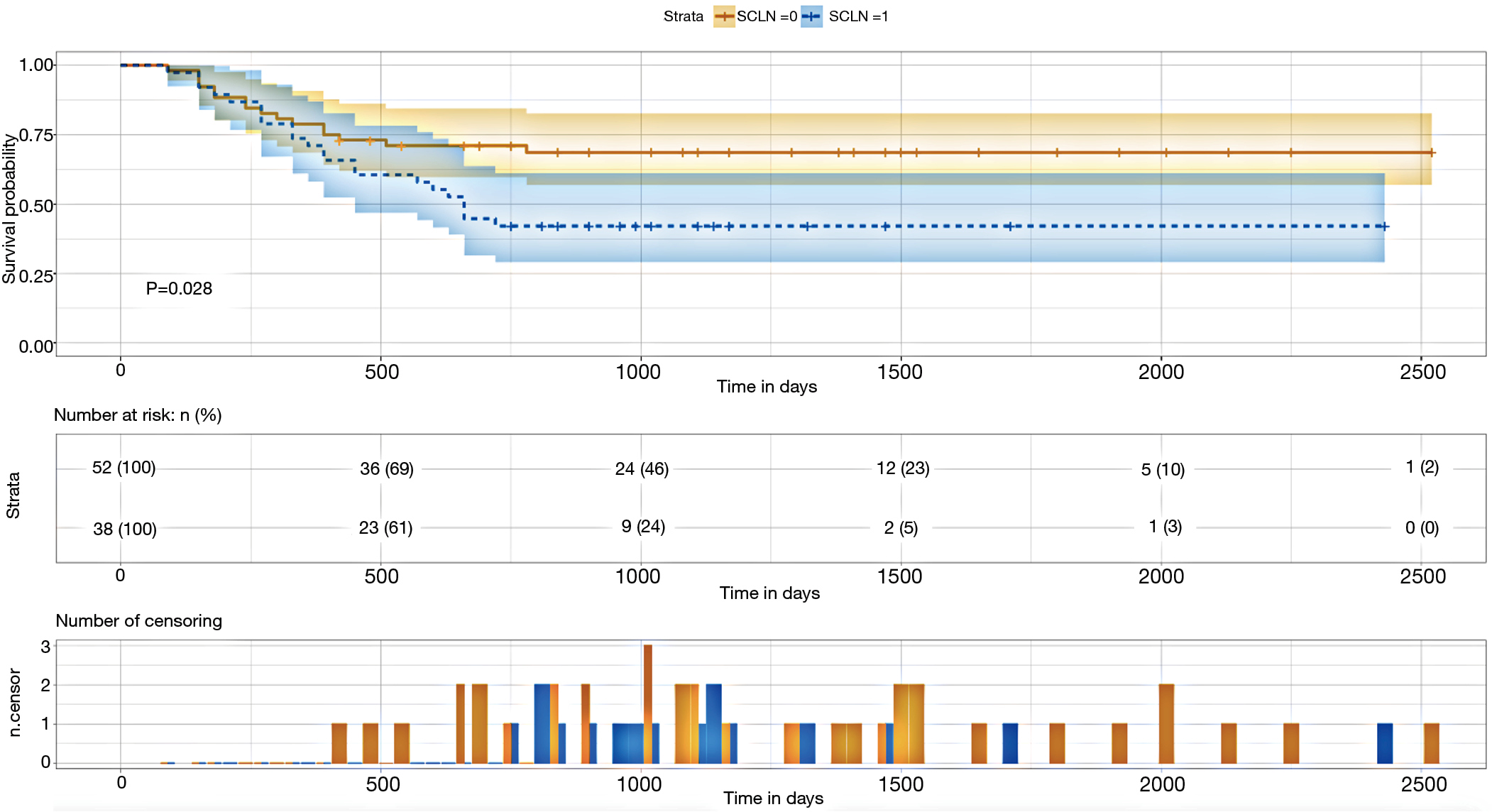 The points of each individual risk factor were combined on the top of the scale to determine the value of the corresponding factor and the total score was determined on the overall scale to predict supraclavicular lymph node metastasis in ESCC patients after surgery in terms of the probability (risk), survival probability and expected survival time; quantitative risk assessment of postoperative supraclavicular lymph node metastasis and survival prediction were applied for the individual risk assessment. This approach made the complex prediction more intuitive and easier to generalize and apply (Figures 2-4). 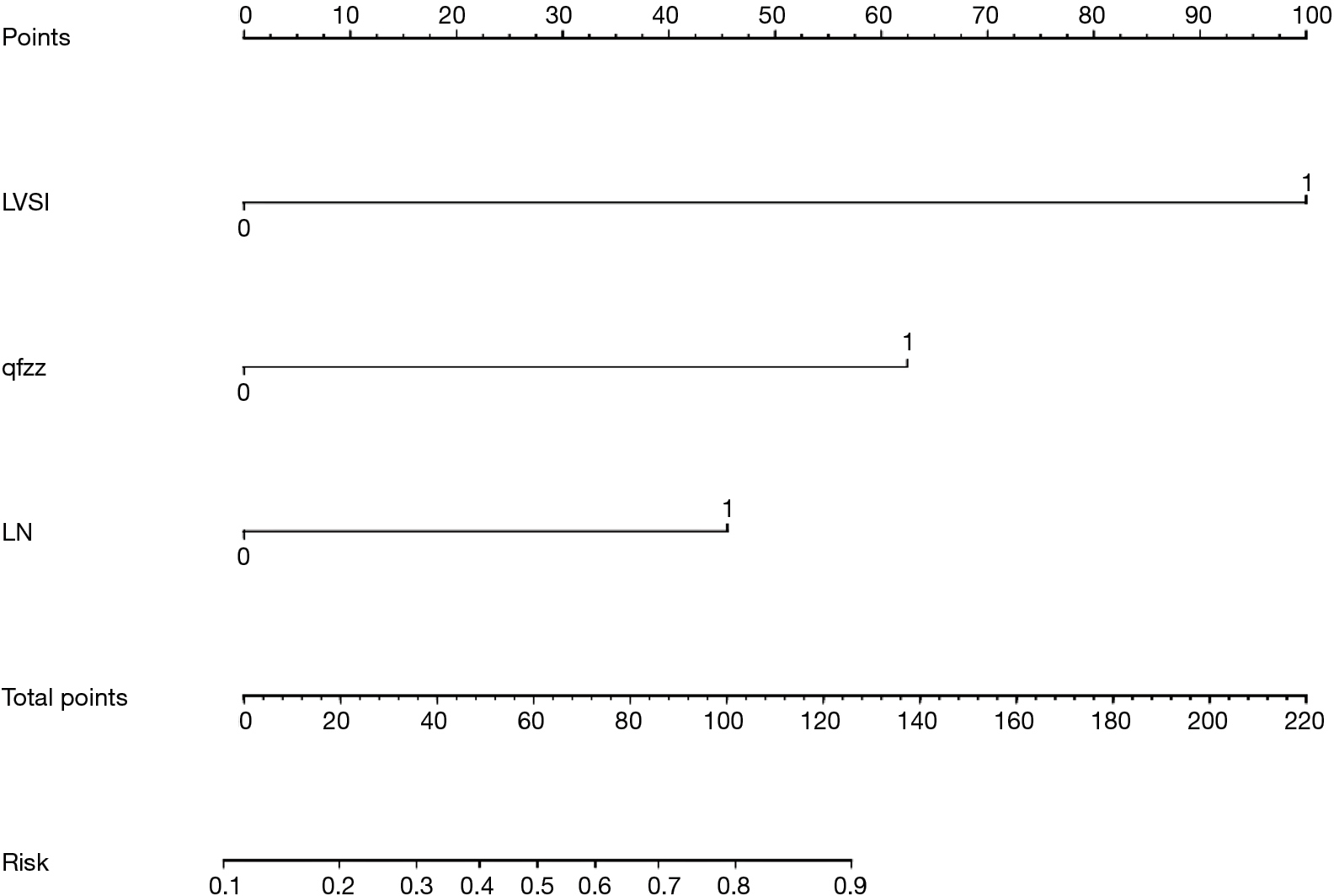 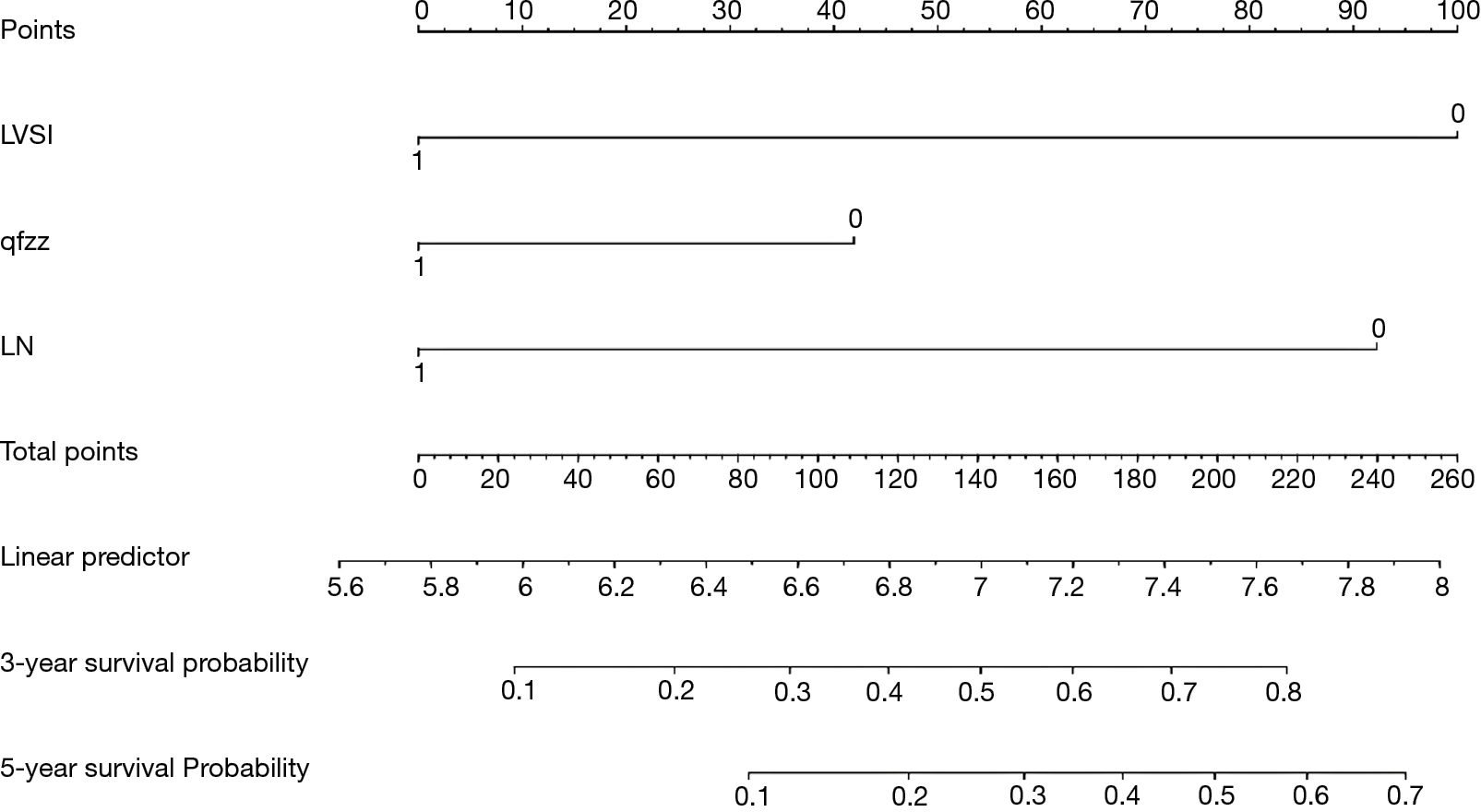 The data is calculated by bootstrap resampling method to calculate the C index of the nomogram model to predict the survival rate is 0.806 (95% CI: 0.738–0.874) >0.07, indicating that the prediction accuracy and accuracy of the model are good. The calibration chart obtained by using bootstrap resampling to regroup the data and further incorporate it into the statistical program is shown in Figures 5,6. Through curve analysis, it is not difficult to see that the 3- and 5-year survival probabilities predicted by the nomogram and actual observation results It is consistent. The prediction accuracy and accuracy are good and can be used to guide clinical decision-making. 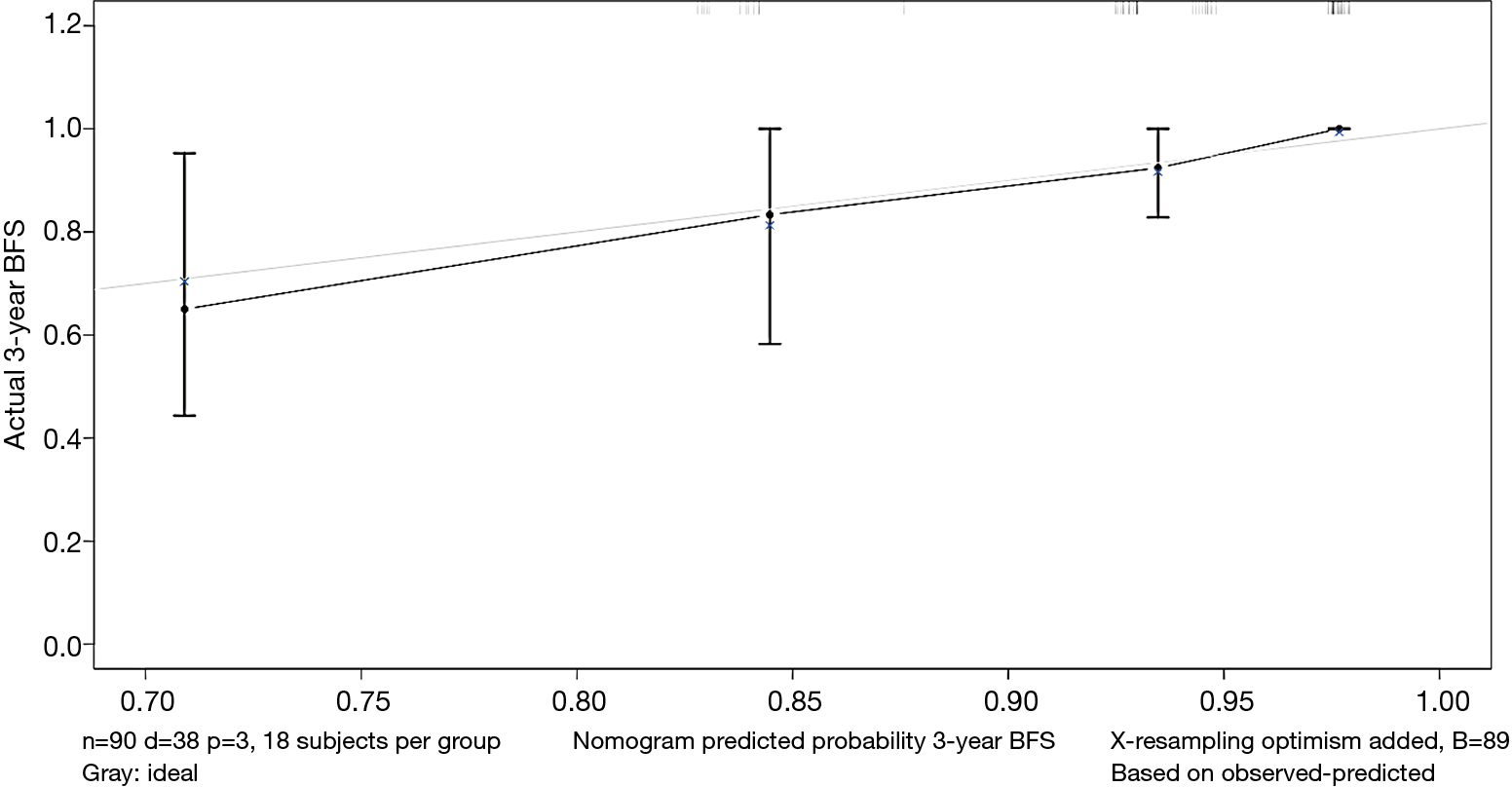 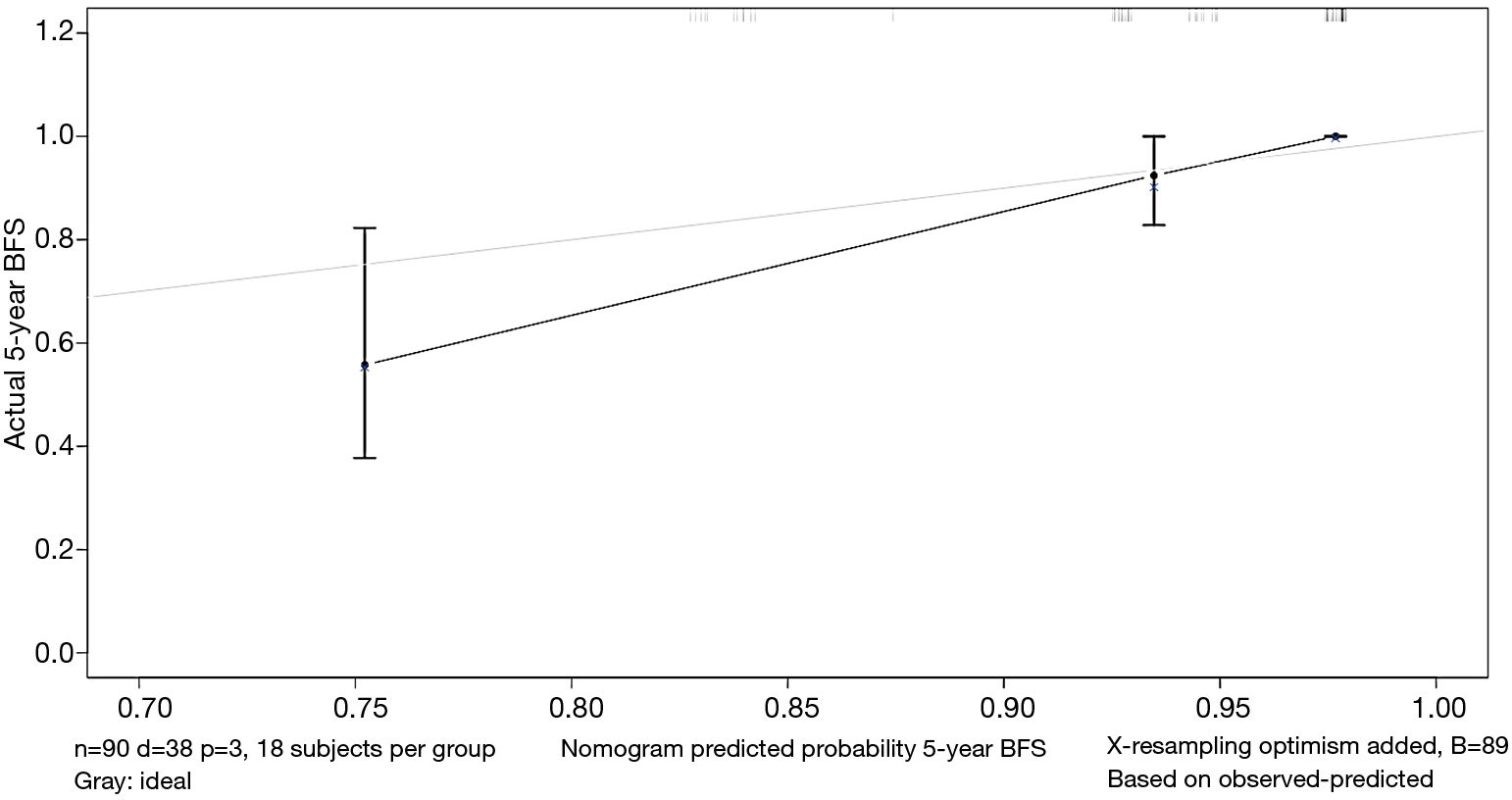 By drawing the decision curve, it can be seen that PT value is in the range of 0.14–0.6. The red curve is above the blue curve (also above the light grey and grey curves). In other words, when the risk of supraclavicular lymph node metastasis in elderly patients after radical resection of esophageal squamous cell carcinoma (ESCC) predicted by nomogram model is in the range of 0.14–0.63, its independent risk factors can be used to predict and evaluate the survival probability of elderly patients with ESCC, which can be used to guide clinical decision-making (Figure 7).

The clinical study of lymph node dissection in esophageal cancer began in the 1960s. The scope of (23) surgeries was extended from the middle and lower mediastinum and upper abdomen (traditional two-field dissection) (24-28) to the cervical and thoracic junction in the upper mediastinum (extended two-field dissection) (29) and then to the neck (three-field dissection) (30-34). The value of lymph node dissection is reflected by the following aspects. (I) The accuracy of surgical pathological staging is improved. In particular, the 7th edition of the International Union Against Cancer (UICC) in 2009 proposed N classification according to the number of metastatic lymph nodes, so more than 12 lymph nodes must be dissected to ensure the accuracy of staging (35). (II) There is a deeper understanding of lymphatic metastasis in esophageal cancer. The lymph node groups with a high incidence of metastasis in thoracic esophageal cancer are the recurrent laryngeal nerve chain at the junction of the neck and thorax and the superior, middle and lower esophageal and cargo-gastric left artery-celiac artery chains. In terms of staging and radical treatment, systematic dissection of lymph nodes in these areas is required. (III) Radical surgery is improved, postoperative local recurrence is reduced, and long-term survival rates are improved. There has been a growing debate about the scope of lymph node dissection (6,23-30,36). The reasonable selection of the range of lymph node dissection to ensure efficacy and reduce the negative effects of surgery is key. In particular, compared with young patients, elderly patients with ESCC have poor cardiopulmonary function reserve, relatively weak homeostasis and anti-strike ability of the internal environment, and they have a higher difficultly withstanding the trauma associated with surgery and postoperative complications.

We must acknowledge several limitations of this study. First, the current study was a retrospective design of a small population. Potential biases were inevitable because of the retrospective nature of our study. Although some advanced statistical methods were applied to balance the covariates among the arms, there were still some latent biases. Secondly, the risk stratification of postoperative supraclavicular lymph node metastasis is not mature. Most importantly, this study only included single center samples to establish the nomogram model. In future further research, a more representative multi center sample of elderly patients with esophageal squamous cell carcinoma is needed to further improve the risk assessment value and survival benefit of the nomogram prediction model.

In conclusion, our results provide preliminary evidence that postoperative lymph node metastasis, vascular tumor thrombus, and tumor infiltration are independent risk factors for the development of supraclavicular lymph node metastasis in ESCC radical surgery based on the mathematical models of the column chart; these factors can be used to analyze risk assessment and survival in patients with indicators, as well as the risk of radical chest lymph node removal with two-field lymphadenectomy if further retrospective radiation and chemotherapy are needed postoperatively in patients with ESCC or supraclavicular lymph node cleaning treatment to provide a quantitative basis of risk.

Reporting Checklist: The authors have completed the TRIPOD reporting checklist. Available at http://dx.doi.org/10.21037/jtd-20-1388

Conflicts of Interest: All authors have completed the ICMJE uniform disclosure form (available at http://dx.doi.org/10.21037/jtd-20-1388). The authors have no conflicts of interest to declare.

Ethical Statement: The authors are accountable for all aspects of the work in ensuring that questions related to the accuracy or integrity of any part of the work are appropriately investigated and resolved. The study was conducted in accordance with the Declaration of Helsinki (as revised in 2013). The study was approved by institutional/regional/national ethics/committee/ethics board of Fujian Union hospital (No.: 2020KY017) and informed consent was taken from all the patients.