We present the following article in accordance with the STROBE reporting checklist (available at http://dx.doi.org/10.21037/jtd-20-3448).

The clinical data of patients who were pathologically diagnosed with NSCLC between 2004 and 2015 were extracted using the SEER*Stat software from the Surveillance, Epidemiology, and End Results (SEER) database. The eligibility criteria were as follows: 20 years of age or older, underwent sublobectomy, and NSCLC tumor ≤3 cm. The collected data included age, gender, pathological type, stage, tumor diameter, number of lymph node dissections, surgical methods, radiotherapy and chemotherapy, overall survival (OS), lung cancer-specific survival (LCSS). The study was conducted in accordance with the Declaration of Helsinki (as revised in 2013). 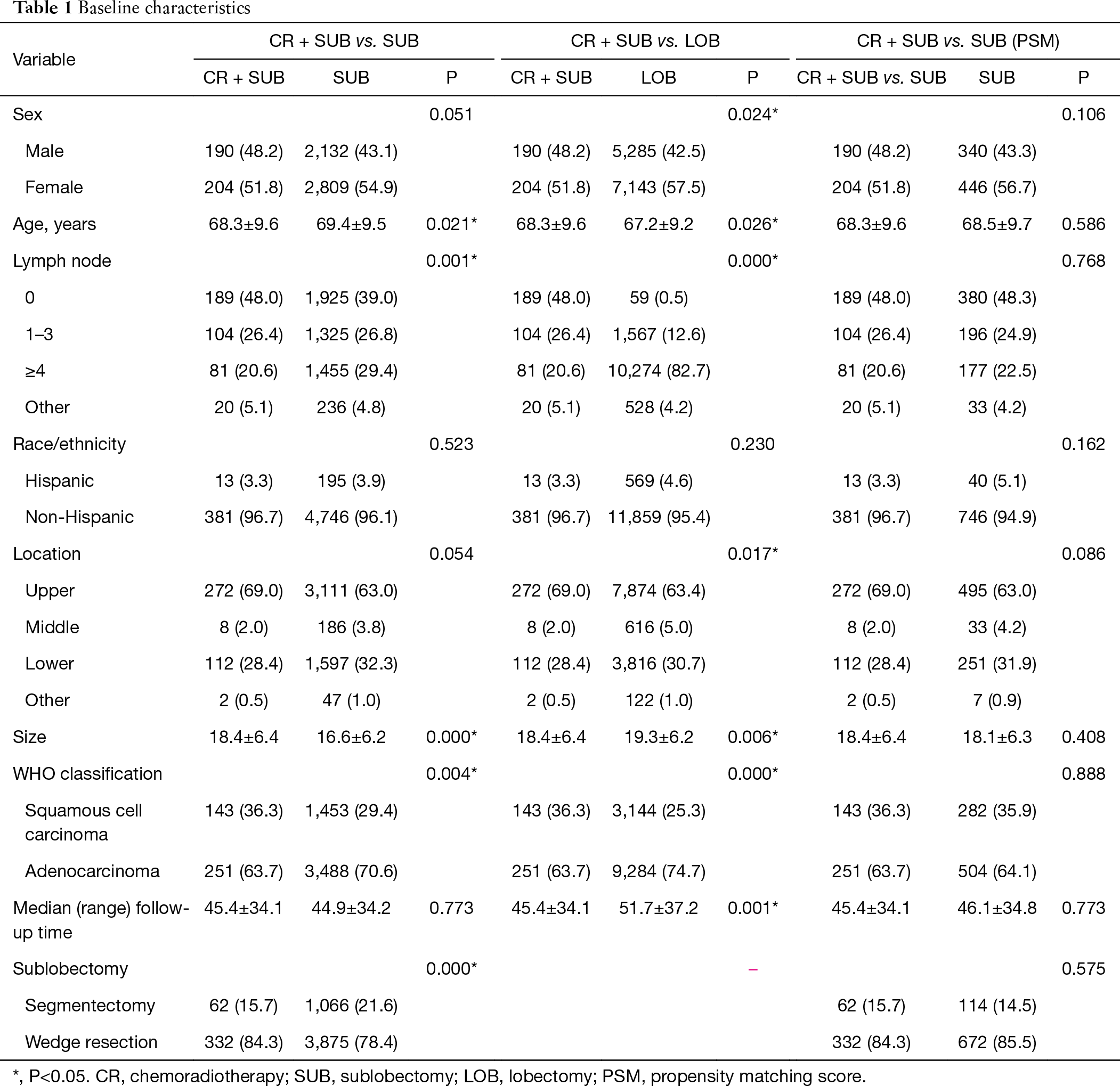 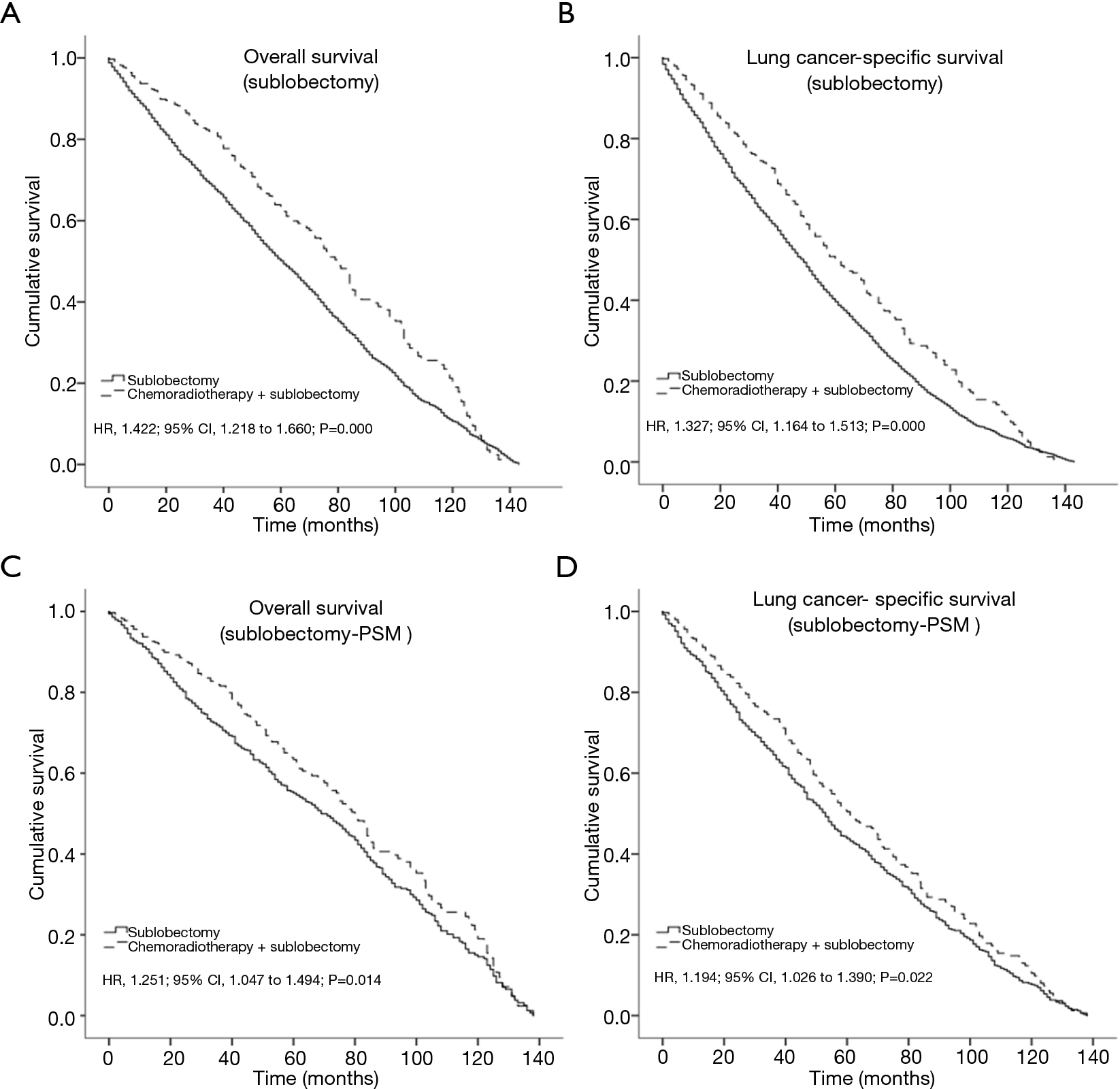 There was still a significant difference in OS between adjuvant therapy and lobectomy alone (HR, 1.380; 95% CI, 1.186 to 1.606; P=0.000) (Figure 2A). In terms of LCSS, there were significant differences in survival between the adjuvant treatment group and the surgery-only group (P<0.05; Figure 2B). When chemotherapy, radiotherapy, and chemoradiotherapy were compared with sublobectomy alone, the survival benefit of adjuvant therapy was more obvious than that of surgery-only (P<0.05; Figure 2C,D), and chemotherapy was more beneficial than radiotherapy and chemoradiotherapy. 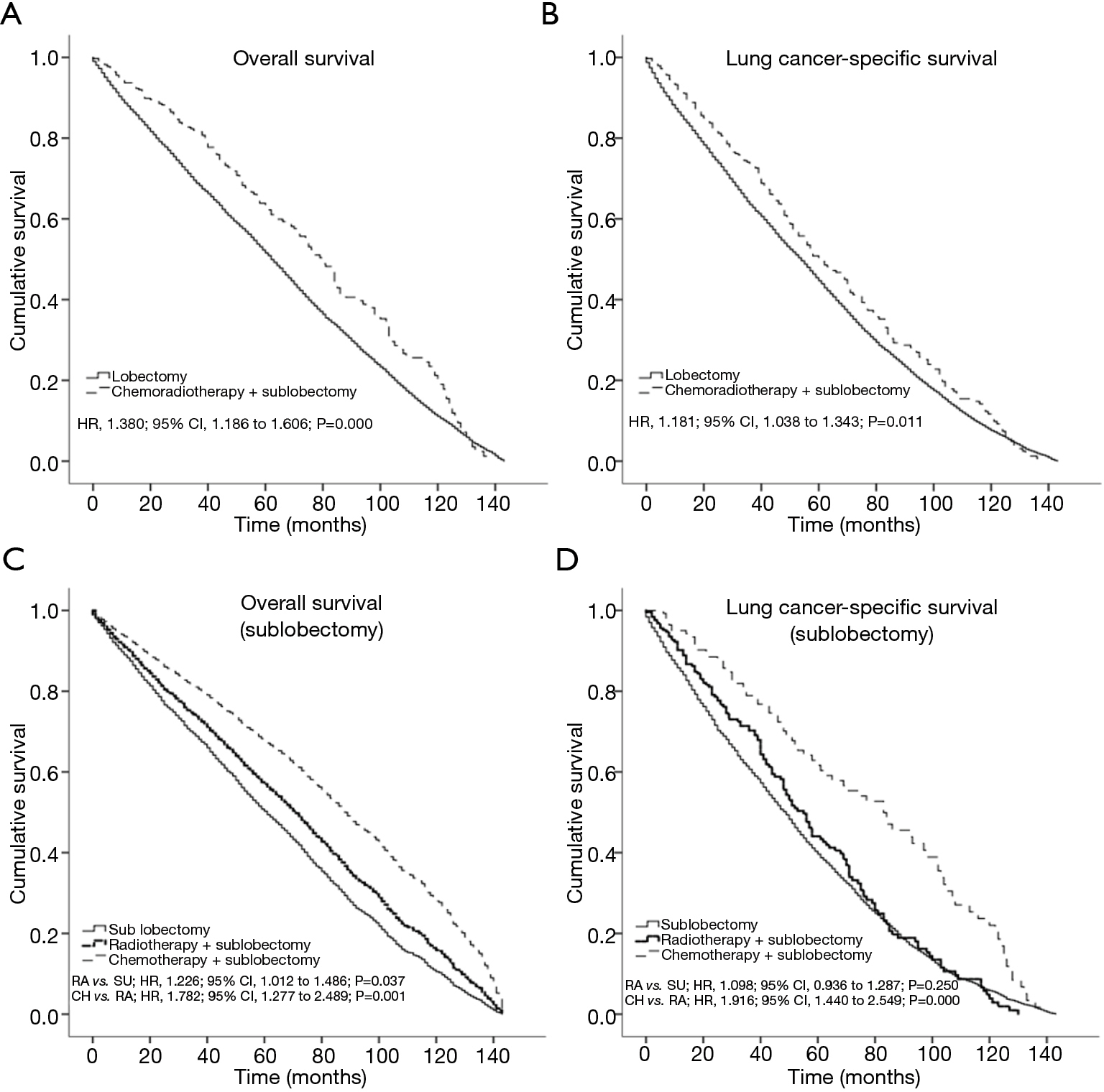 Figure 2 Survival comparison between lobectomy and chemoradiotherapy + sublobectomy. (A) There was a significant difference in total survival between adjuvant therapy and lobectomy; (B) similar results were found for lung cancer-specific survival; The effect of different treatments on survival after sublobectomy (C,D) when chemotherapy and radiotherapy were compared with sublobectomy alone, the survival benefit of adjuvant therapy was more obvious than that of surgery-only. HR, hazard ratio; CI, confidence interval. 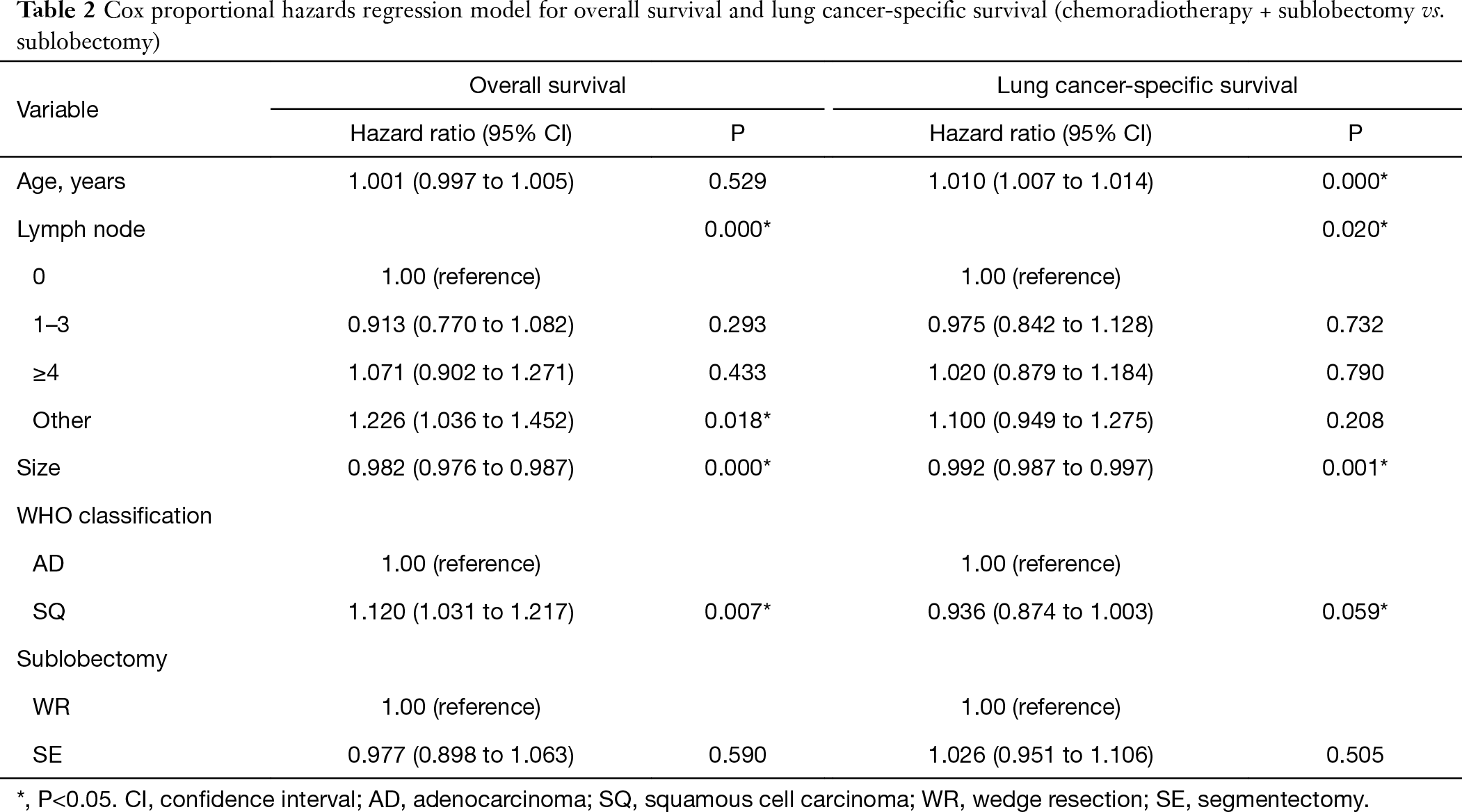 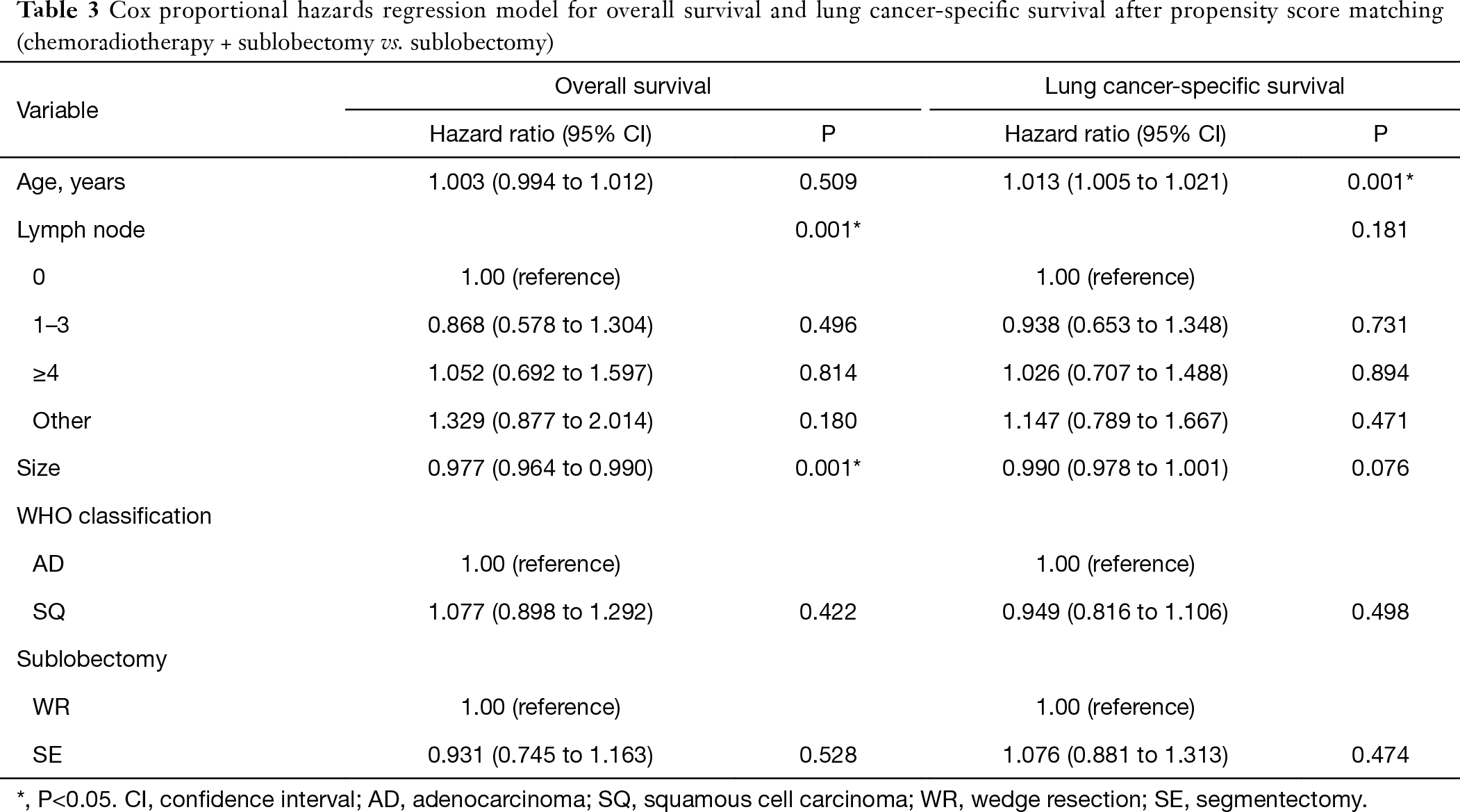 Half a century ago, the debate among surgeons for lung cancer patients was whether to choose lobectomy or pneumonectomy (8). Nowadays, the focus of debate among surgeons for patients with operable clinical stage I NSCLC is whether to choose lobectomy or sublobectomy. The factors influencing prognosis are surgical method, margin, tumor diameter, number of lymph node dissections, and pathological type for operable NSCLC. In order to find a suitable standard for sublobectomy, some studies have explored the diameter of the tumor (9), the number of lymph nodes dissected (3), and the pathological type (10).

Despite the increased detection rate of pulmonary nodules, the choice of surgical method for patients with stage I NSCLC is controversial in the field of thoracic surgery. The current NCCN guidelines recommend lobectomy for stage Ia NSCLC, however, sublobectomy should still be recommended for patients with stage I NSCLC who cannot tolerate lobectomy (2). Consequently, there are no clear criteria for the selection of patients suitable for sublobectomy, which may lead to poor prognosis in some patients due to inappropriate surgical methods.

In a randomized controlled study on sublobectomy and lobectomy from 1995, lobectomy was superior to sublobectomy in terms of survival and local recurrence (4). However, some thoracic surgeons believe this study has many shortcomings, such as an insufﬁcient margin, erroneous pathological classification, and lymph nodes that were not dissected. The margin is also an essential factor that should be taken into consideration after sublobectomy of NSCLC. The adequate margin of wedge resection should ideally be >2 cm or at least 1 cm to reduce local recurrence. However, it has been reported that wedge resection is frequently associated with margins less than 1 cm (48–61%). Even in segmentectomy, 23% to 27% of presented margins are less than 1 cm (11,12). Insufﬁcient margin has been associated with a high risk of locoregional recurrence, which may partially account for sublobectomy failure. Nowadays, surgical methods are much better than before. Although there are still no randomized controlled studies, numerous retrospective studies have reported inconsistent results (13). In particular, segmentectomy can be used to successfully achieve anatomic resection. However, the results of previous studies may not necessarily be applicable today, and sublobectomy, which is similar to lobectomy, can be performed in some patients, especially on ground-glass opacity (GGO) nodules (6,14). Although many studies have reported good prognosis after sublobectomy for GGO nodules (15,16), Moon et al. reported that sublobectomy in clinical N0 solid-predominant nodules could actually increase recurrence due to the marginal factors (13).

This study showed that sublobectomy had worse prognosis than lobectomy, hence, sublobectomy is not recommended for all ≤3 cm NSCLC. We verified that sublobectomy may not perform adequate lymph node dissection, and some lung cancers with longer diameters also received sublobectomy. Therefore, we believe that the poor prognosis of some patients is due to not being given the correct surgery. Although the SEER database does not explain why adjuvant therapy was given, the present study showed that the prognosis of these patients significantly improved after adjuvant therapy, reaching even more optimal results than lobectomy. Moreover, other studies have also confirmed that radiotherapy and chemotherapy demonstrate efficacy in stage I patients (28,29).

The present study has some limitations that need to be addressed. First, the SEER database does not provide specific chemotherapy regimens and radiation doses. Second, this study is a retrospective study. Although the propensity score matching analysis was performed, there is still a possibility of some bias. Finally, due to the low number of chemotherapy, radiotherapy, and chemoradiotherapy cases, they were all grouped into the 1 same group to reduce bias, which could not be analyzed in more detail.

In summary, the results of this study show that chemoradiotherapy can improve the OS of patients after sublobectomy and reduce death caused by tumors. Therefore, when patients cannot tolerate lobectomy or are given inappropriate surgery, adjuvant therapy can improve the prognosis of patients. Our conclusion still needs to be verified using prospective randomized controlled trials.

Reporting Checklist: The authors have completed the STROBE reporting checklist. Available at http://dx.doi.org/10.21037/jtd-20-3448

Conflicts of Interest: All authors have completed the ICMJE uniform disclosure form (available at http://dx.doi.org/10.21037/jtd-20-3448). The authors have no conflicts of interest to declare.