The development and validation of a nomogram for predicting brain metastases in lung squamous cell carcinoma patients: an analysis of the Surveillance, Epidemiology, and End Results (SEER) database

Lung cancer patients who present with brain metastasis (BM) usually have poor prognosis (1-3). These patients place a significant burden on their family caregivers, the nursing staff and the society (4-7). Only early diagnosis and timely therapy can improve their rate of survival (8-11). Currently, the NCCN/ACCP (National Comprehensive Cancer Network/American College of Chest Physicians) does not recommend the screening of asymptomatic patients with stage I non-small cell lung cancer (NSCLC) because stage I NSCLC are less likely to have BM (12,13). However, BM may occur in patients with early-stage NSCLC even in the absence of any neurological symptoms. Whether conventional brain imaging, such as magnetic resonance imaging (MRI) of the brain, should be used in all cases remains controversial (14). If BM can be predicted prior to brain MRI imaging with the use of a nomogram, asymptomatic early-stage NSCLC patients could avoid missed or delayed diagnoses. The incidence of BM is lower in patients with lung squamous cell carcinoma (LUSC) compared to those with non-squamous cell carcinoma (NSCC) and there are few studies on BM of LUSC (15,16). Efficient tools are urgently needed to facilitate the early diagnosis of BM in patients with LUSC (17).

The “seed and soil hypothesis” has been proposed to explain the pathogenesis of BM (18). Nomograms have shown favorable efficiency in predicting risks and outcomes in various cancers, such as breast cancer and intestinal cancer (19). Therefore, in this study, a new nomogram was established to predict the risk of BM in LUSC patients.

We present the following article in accordance with the TRIPOD reporting checklist (available at http://dx.doi.org/10.21037/jtd-20-3494).

The study was conducted in accordance with the Declaration of Helsinki (as revised in 2013). The data were collected from the Surveillance, Epidemiology, and End Results (SEER) data library. Informed consent was not required as cancer is classified as an informed illness in the United States of America.

The SEER *Stat Software (version 8.3.4) was applied to create the tabulation of all cases. Patients who were pathologically confirmed with LUSC from the SEER database during 2010–2015 were included. The exclusion criteria included the following: non-first primary LUSC; unknown brain metastases; incomplete data regarding gender, race, marital status, insurance status, grade of tumor, tumor location, laterality, and T or N cancer staging (as defined by the 7th edition of the American Joint Committee on Cancer (AJCC) staging system); bone, liver or lung metastasis; and unknown history of chemotherapy, surgery or radiotherapy. The patients diagnosed with LUSC during 2010–2012 and 2013–2015 exhibited comparable clinical pathological characteristics, therefore the training cohort included patients who were diagnosed during the period from 2010 to 2012, while the test cohort included patients who were diagnosed between 2013 and 2015.

The Pearson chi-square test or Fisher’s exact test was used to contrast the variables between the training cohort and the test cohort. Regression analysis was utilized to screen out risk elements of BM that were then further submitted to multivariate analysis. The odds ratio (OR) was expressed as the 95% confidence interval (CI). The nomogram was established using the training cohort data and then discrimination and calibration were evaluated using the test cohort. Variables (such as tumor location) with P<0.05 were incorporated into the nomogram. The likelihood-ratio test was applied to select the proper model.

The discrimination performance of the nomogram was quantified by the area under the receiver operating characteristic (ROC) curve (AUC). By drawing the relationship between the observed and predicted incidences, the nomogram was calibrated with the Hosmer goodness-of-fit measurement. The bootstrap method (1,000 replicates) was employed for the internal verification of performance. Overall checkouts were two sided. Results were considered statistically different when P<0.05. Statistical analysis was performed using the SPSS 3.5.1 software. 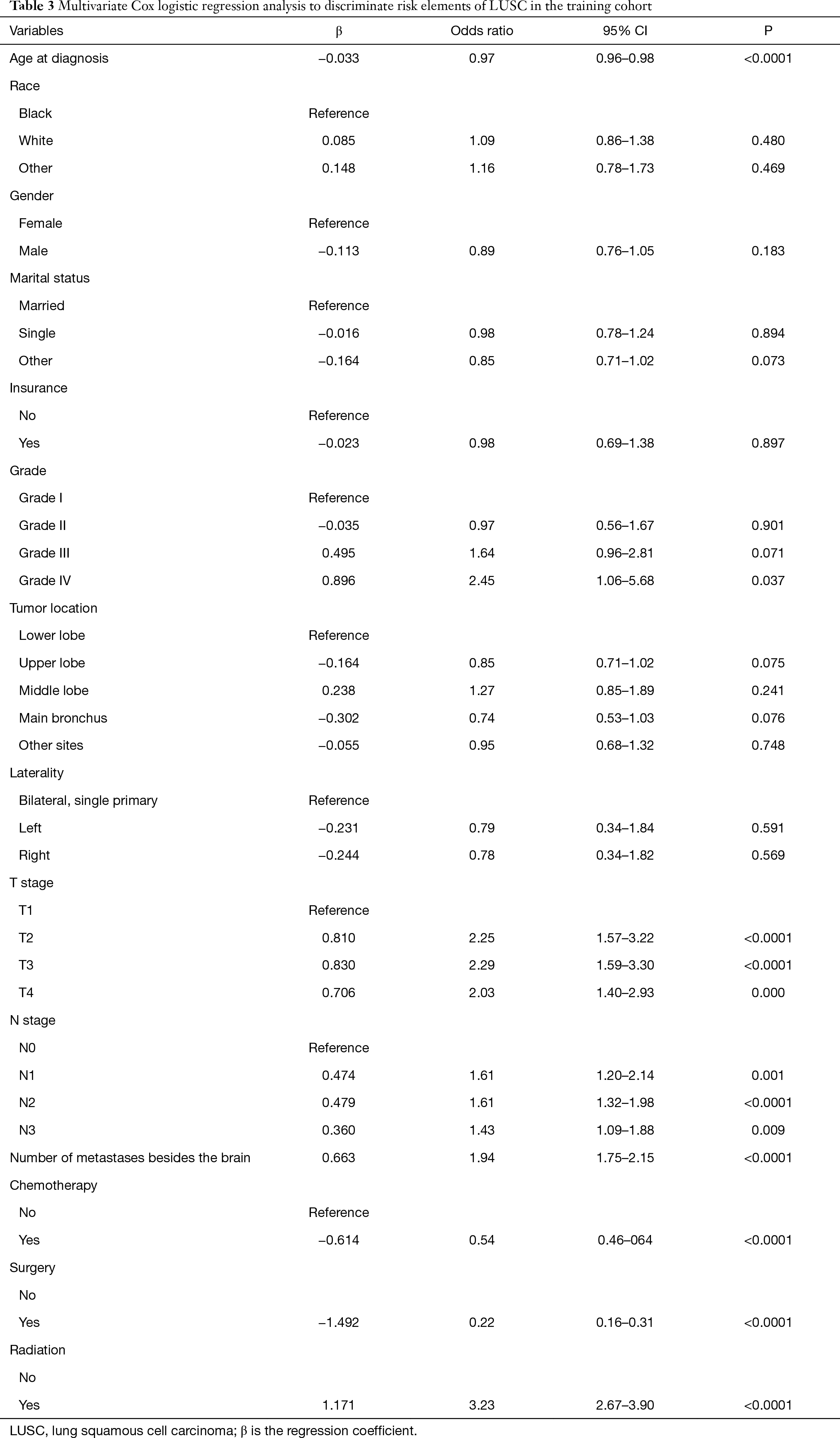 Construction of the nomogram

The nomogram was established by incorporating age at diagnosis, grade, the location of tumor, T and N stage, number of metastases, chemotherapy, surgery, and radiation (Figure 2). The AUC of the nomogram was 0.810 (95% CI: 0.796 to 0.823) and 0.805 (95% CI: 0.784 to 0.825) in the training cohort and the test cohort, respectively, suggesting a good predictive ability (Figure 3A,B). The calibration curve showed a high consistency between the observed and predicted survival (Figure 3C,D). 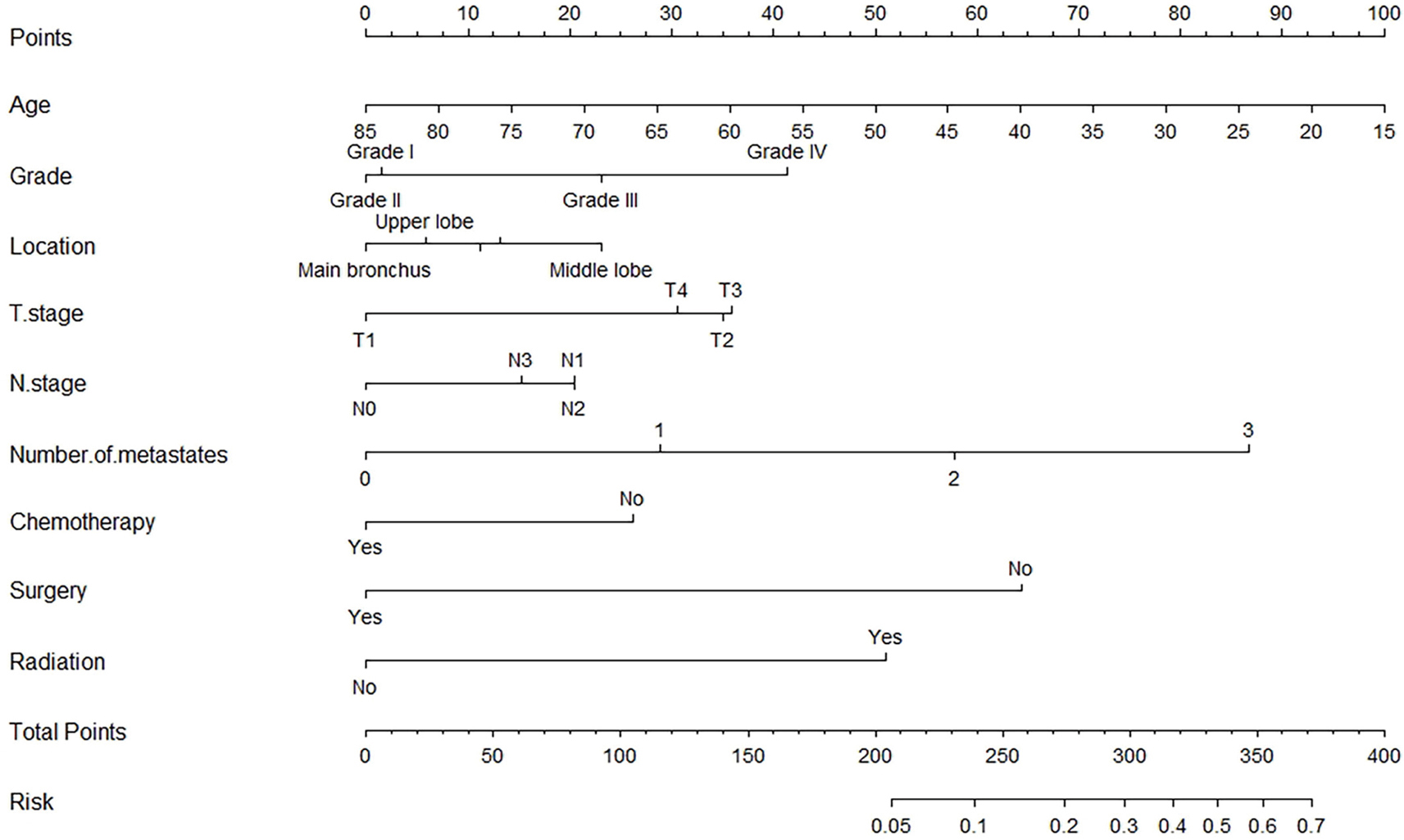 Figure 2 Nomogram predicting BM in patients with SCC. The first row illustrates the point allocation of every variable. Lines 2–10 represent the alternating quantity contained in the nomogram. For each patient, each variable of LSCC was given a score. The scores were totaled and illustrated in line 11. The bottom row presents the probability of BM. BM, brain metastasis; SCC, squamous cell carcinoma; LSCC, lung cancer specific survival. 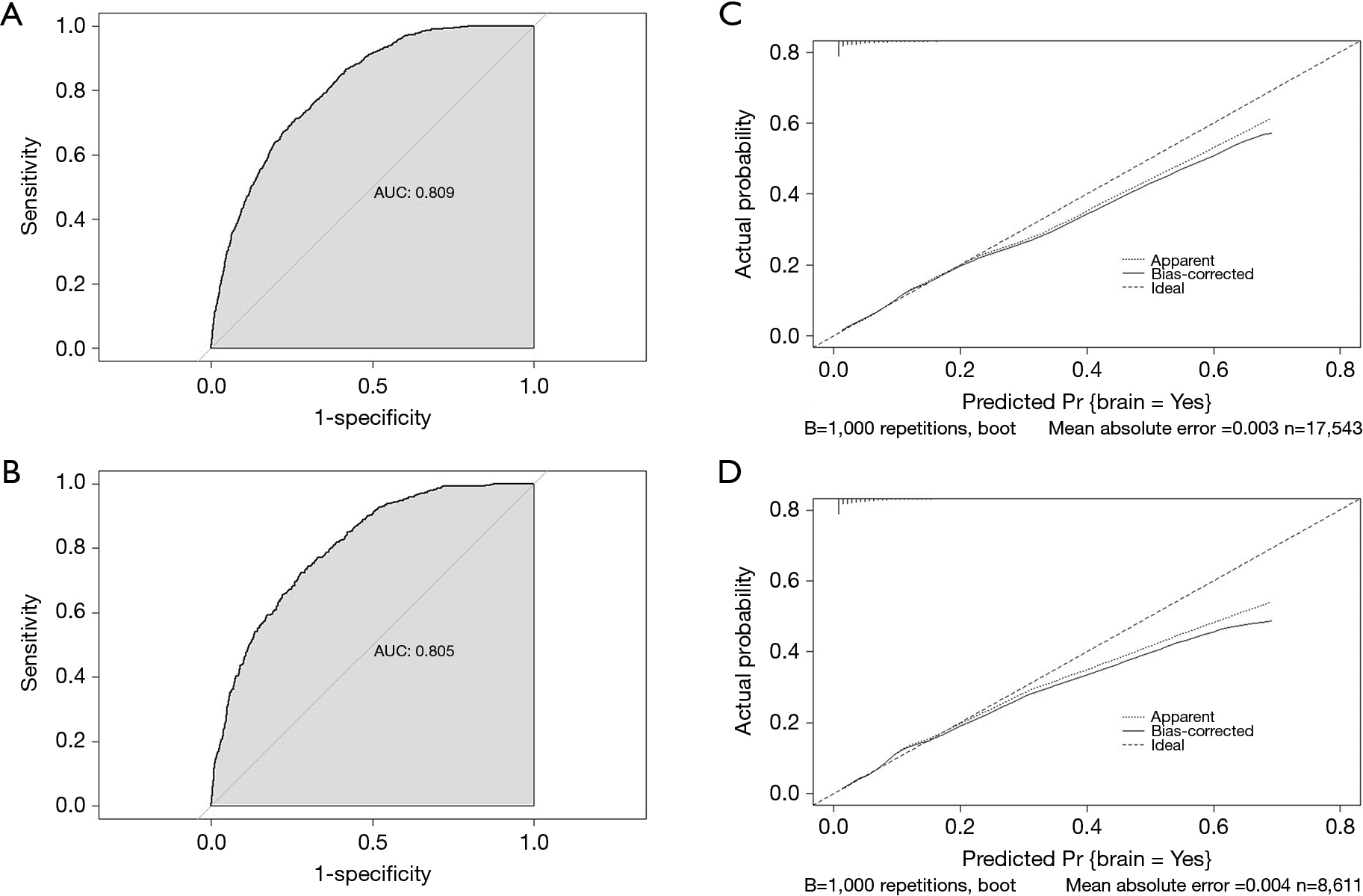 Our research is the first to report a nomogram for predicting BM in patients with LUSC. This nomogram provides an efficient and convenient tool for early diagnosis of BM thereby allowing for the implementation of timely treatment strategies. Previous studies have demonstrated similar BM pathogenesis in patients with LUSC and lung adenocarcinoma (LUAD) (20-23). Muniz et al. found that the incidence of BM increased with age in patients with LUSC and LUAD (24), which is consistent with our results. Univariate and multivariate Cox logistic regression analyses demonstrated that age at diagnosis, tumor grade, location of tumor, tumor stage, number of organs with metastases, chemotherapy, surgery, and radiation were independent factors that could predict the incidence of BM. These factors were used to establish a prediction nomogram. The predictive accuracy was validated, with AUC of 0.810 (95% CI: 0.796 to 0.823) and 0.805 (95% CI: 0.784 to 0.825) in the training cohort and the test cohort, respectively. These results support the potential use of this nomogram in clinical practice, especially in the establishment of individualized treatments.

However, due to the retrospective nature of this study, selection bias may exist. As new treatments continue to be developed for the improved survival of LUSC patients, this current nomogram should be renewed with additional clinical data, such as types of surgical treatment, radiotherapy dosage, and chemotherapy regimens. Furthermore, due to insufficient data, our nomogram could only be validated internally (19,25) and hence, validation with larger data cohorts and longer follow-up times will be required.

The nomogram could accurately predict the incidence of BM, which is helpful in the early identification of high-risk LUSC patients and the establishment of individualized treatments.

Reporting Checklist: The authors have completed the TRIPOD reporting checklist. Available at http://dx.doi.org/10.21037/jtd-20-3494

Conflicts of Interest: All authors have completed the ICMJE uniform disclosure form (available at http://dx.doi.org/10.21037/jtd-20-3494). The authors have no conflicts of interest to declare.

Ethical Statement: The authors are accountable for all aspects of the work in ensuring that questions related to the accuracy or integrity of any part of the work are appropriately investigated and resolved. The study was conducted in accordance with the Declaration of Helsinki (as revised in 2013). The institutional review board approval was waived for this study as the SEER database is a public anonymized database. The author Zhang obtained access to the SEER database (accession number: 13013-Nov2019). The data issued in the SEER database do not require consent from patients as cancer is an informed illness in every state of the United States of America.